Hello, humans! In case you weren't aware, Moon's mother has been in the hospital, and I haven't wanted to bug her about the whole blogging thing while clearly more pressing matters are at hand. That's why you've been suffering through my solo efforts so long! However, the most recent update (as of this evening) is that the situation has improved somewhat, and thus I'm optimistic that she'll be able to drop in this week for at least one post.

Regardless, I do hope you'll stick with me in the interim! I know, I know, our entire shtick kinda rests on the "conversation" and if I were true to the integrity of that concept I would shut the whole operation down until Moon's return. But I feel like we've got some decent momentum going and I'd hate to lose that, so here we are! With any luck you'll slog through my inane babbling only a bit longer. :)

Anyway - week in review! Prepare for some serious excitement, kids, because I... have nothing much to report on the training front. I got done what I meant to get done this week, despite the wretched humidity. The weather this week was in that unfortunate spot where it's definitely hot but not so hot that the hardcore air conditioning kicks in at the gym, so all my runs were sweeeeeeeeaty. But hey - good practice for my next half at Walt Disney World! :D :D :D

It was also the week off of ballet between the summer and fall sessions, so I took the opportunity to experiment with some YouTube workout videos. So far I like... none of them, really. Does anyone have any suggestions? I'd like something that's hard enough that I feel it but not so hard that I don't want to actually DO it, if you catch my drift. Something that works the abs for preference!

Musically speaking, I was on a bit of a early-00's kick, or, as I like to call it, Music I Listened To On The Radio In High School. Nice, fast rock -  stuff like Audioslave ("Show Me How to Live" and "Like a Stone") and System of a Down ("Chop Suey!") and 311 ("Creatures"). Not musical masterpieces but some serious beats to get you moving.

Speaking of things with serious beats: time for a blog roundup!

- Not sure what to do with all your race bibs? Dad runsDisney has some nifty ideas. Love the coasters!
- Running at Disney has the scoop on instructions for the Disneyland Half Marathon. Who's running out there? We're in for 2015!
- Need more advice about the Disneyland Half? We Run Disney has it for you!
- Not enough! Get even more race details from The Runner's Guide to WDW.
- Now that you're all set on the race, time to put some thought into her costume. Half Crazy Mama has some thoughts on the matter.
- Road Runner Girl has the neatest story about IRun4, which matches up runners with people who can't run so that they might be mutually inspired. What a great concept - we should all sign up!
- I'm so behind - I JUST discovered the Team #runDisney site. Check it out for lots of awesome race recaps.
- And finally, in your purely Disney post for the week, The Disney Tourist Blog walks us through some common Disney myths.

Because "beat" is what you call a regular column in a newspaper, and bloggers are the journalists of the internet, and... never mind. Um... look! It's the world's happiest goat! 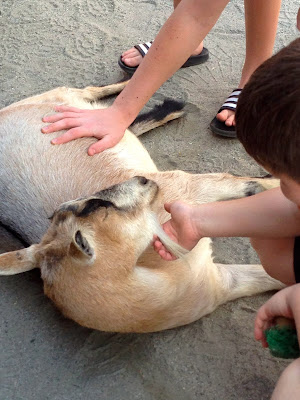