In Which Jenn & Moon Run Around the Lake at Pop Century 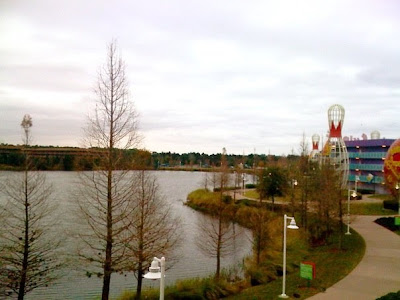 I mentioned on Tuesday that I don't generally run outside unless I'm racing or at Disney. Here is the story of one out of two!

For our Princess Half Marathon trip, Moon and I were forced by tragic circumstance (*cough* grad school *cough*) to head down to WDW and leave the evening after the race. Naturally it's better to do your park touring after your running, but what can you do. This did mean, though, that we had time for a little tune-up run before the race, so on Wednesday, after we'd gotten back from our first day in the World, we decided to head out for a few laps around Hourglass Lake. 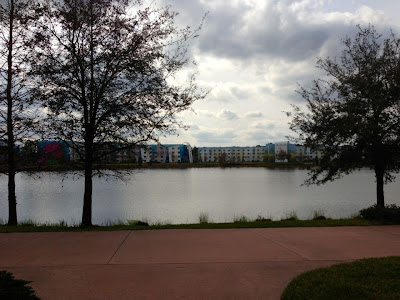 In case you're not aware, Hourglass Lake is the body of water between Pop Century and Art of Animation resorts, and YOU'LL NEVER GUESS WHAT IT'S SHAPED LIKE. Oh, and there's a bridge in the middle, so theoretically you could do figure-eights. We chose the more staid route, just a steady circle around the lake.

It was around 9PM and dark, but of course there were bright lights along the path and shining from the resort paths. There were a few people out on the benches, but it was quiet, and I was really... happy. Because it was the wonderful Zen feeling of a gentle run combined with the wonderful Zen feeling of being at WDW, where things are right, and it makes me wish I could always run there. My quality of life would improve tenfold if only I had a private plane...

I sent Moon an email telling her I was doing this post in case she had time and wanted to provide input. We had the following email conversation:

MOON: I like the big toys... I forgot for the name. It is round and has string and you toss it around. Star Trek is also good.


So yeah! Great scenery, Star Trek, WDW, happiness. After which we took showers and then got dinner at the food court and went to bed. IT WAS AWESOME.

Have you gone for practice runs at WDW? What are your favorite routes?