In Which Jenn Recaps the Color In Motion 5K 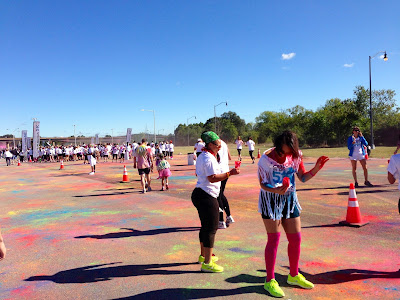 After last week's Electric Run 5K two weekends ago, Scott and I weren't finished: last Saturday we tackled the Color In Motion 5K, one of those races where people chuck colored powder at you until you look like a piece of spin art. It was a good experience but not without some troubles. As Lewis Carroll so wisely suggests, I will begin at the beginning, go on until I reach the end, and then stop.

For starters, the Color In Motion people did the same thing the Electric Run people did - they made the pickup location Alexandria, Virginia. And I'm not knocking Virginia. It's a fine state and I'm very fond of its Williamsburg attractions. But the Sports Authority where CIM wanted me to pick up my packet (possibly even the same one as the Electric Run?) was 35 minutes away from me. Via the DC beltway. If you're not familiar with the DC Beltway Time Conversion Algorithm, allow me to do the math for you:

So we decided we'd pick up our packets the morning of the race. One point in CIM's favor over the Electric Run - CIM didn't charge us for the privilege.

The race began at RFK Stadium; I live on the red line and didn't feel like make the circuitous transfer from the red to orange lines on a weekend, so I decided to go to Scott's place in Baltimore for the night. From there we could drive directly New Carrollton, the orange line's end point, and the Stadium-Armory stop would be shortly down the line.

I arrived at Scott's, found a parking space, accompanied him and his roommate on a dinner outing to Abbey Burger, and promptly made my first mistake: I allowed him to talk me into sleeping until 7AM. I should never have let him do that; I KNOW that you need to get to your race early if you intend to do packet pickup and bag check. But I was tired and feeling a little under the weather so I agreed.

I'm sure you'll all be shocked to learn that, what with one setback and another, we didn't make it into the pre-race area until about 9:15AM. The first wave was set to take off at 9:30AM, but the last wasn't supposed to start until 10:10AM; the situation wasn't ideal but it wasn't terrible. We ought to be fine, I thought.

And theoretically, we should've had plenty of time. In reality, the line for both packet pickup AND bag check were several bajillion miles long. There were only two or three people working at each booth and they couldn't keep up with demand. I briefly hopped in the store line too, to pick up some socks I preordered while Scott checked our bag, but that barely moved so I eventually bailed.

It was well past 10:10AM before we had completed both tasks, and there were tons of people behind us in line in either case. Luckily around 10AM one of the officials got on the deejay's mic and announced that they recognized the lines were crazy, they were pushing back the last wave, and they'd make an announcement before that happened. To their credit, they did seem to want to give everyone a chance to run.

Our packets, incidentally, didn't contain much - in fact, we pretty much just got a bib and a packet of colored powder to toss at people. Although I had pre-registered for a size small shirt, it was not included in the packet; I was directed over to a shirt table where I was told that they were all out of smalls. I accepted a medium and it was fine, but if they're going to offer sizes beforehand I really think they should put them in the packet.


Scott and I wound up in the last wave, which finally took off at 10:36AM. The course began in a section of the RFK Stadium parking lot, wound up and around the building, serpentined up and down a few more sections of parking lot, and then returned to the start area. With a few exceptions, it was fairly flat.


Along the way, several "powder" stations were set up, largely themed to one color; these included orange, green, pink, and blue. As you ran through the color station, volunteers squirted color on you via the method of their choice. My favorite was a volunteer who had completely COVERED himself in orange powder, and when I say "covered" I mean "I am honestly in the dark regarding his skin tone, hair color, and the hue of anything he was wearing." He was greeting everyone who ran through with "Free orange hugs! Free orange hugs!" Naturally Scott and I went in for a group hug.


It was a nice day and a fairly simple course, so by rights I should've had a great race - except remember how I mentioned I was feeling kinda under the weather? That didn't change overnight. I had a bit of a cold and I was dragging; I had to walk several times. We didn't cross the finish line until 11:14AM. Man, I can do so much better!

There was a dance after-party going on in front of the deejay's stage, but they weren't playing techno so Scott was having none of it (myself, I prefer ballet). We wandered past and grabbed a bottle of water. There were a bunch of food trucks parked around the area, but nothing was offered complimentary to the runners.


I went over to the store to pick up those knee socks I had pre-ordered, and was told that they were all out of green but I could pick another color. I grabbed pink, and was fine with it because when I ordered them I waffled about the color I wanted anyway, but once again it seemed to negate the entire point of pre-order. If I selected and paid for merchandise beforehand, it should've either been placed in my packet or set aside for me.

At this point we were tired and just wanted to go home so we did that. I bet the Metro cleaning staff just LOVED it. 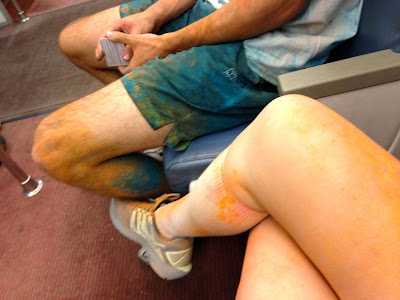 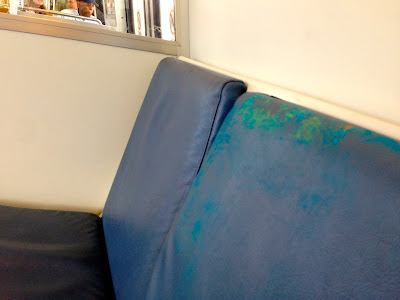 I realize this recap sounds kinda whiney and displeased, but I ultimately liked it! I did. I just think it needs some tweaking. Specifically:


Incidentally, if you're wondering about the colored powder: it seems to be the same stuff they use in Indian festivals, and it didn't even stay on clothing particularly well unless you really caked it on. We tossed our shirts in the washer when we got home and they washed perfectly clean; we tossed ourselves in the shower and we washed perfectly clean too, both skin and hair. My sneakers are still stained but I'm not worried about it. Even with a slight cough it didn't bug my lungs, but there were people with face masks and bandanas over their mouths if that's a concern of yours. 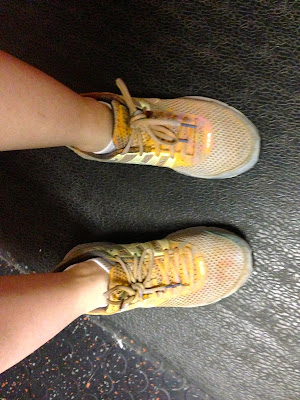 Would I run this race again? Sure, I'd give it a go. The people were friendly and tried to help in the face of most of the above mentioned problems, and the colored powder concept was fun. And it would be nice to do it WITHOUT a cold. Hopefully, though, the organizers will be more organized next time.

I by no means had a terrible experience; there were just some issues that needed fixing. Do any of you have any REAL race day horror stories?