In Which Jenn & Moon Discuss Running While Wearing Makeup 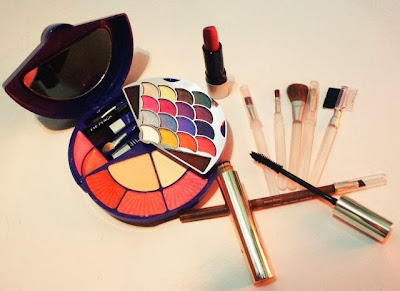 JENN: This is a topic that has been pinging around in my skull for some time: running in makeup.

I remember for the Princess Half Marathon I put on some foundation because it has SPF 15 and I am the world's palest pale person. By the end of the race I can't be sure I didn't sweat it all off. But I remember looking around and seeing all these fellow runners wearing beautifully made-up faces, often featuring thick-drawn eyeliner and glittery eyeshadow. Which I totally get, because it's the PRINCESS Half Marathon, and even for runDisney generally, costumes tend to be a thing and makeup goes with that.

I wound up wearing varying amounts of makeup for my last few races, but I'm just wondering... how does elaborate makeup work?

Moon, have you ever run in makeup?

MOON: I don't believe I have, no. To be fair, I rarely wear makeup in the first place. Although, I do have this cream that is supposed to keep makeup where you put it. I use it when I apply eye makeup because it tends to smear when I blink. I've used it a few times and as long as you give it time to dry, it works. So, I'm sure if we take it for a spin we can write up an amusing post afterward. ;)

JENN: I know this is super vain, but I feel like maybe if we wore makeup we might hate our race photos a little less... I don't know about you, but I went through all the photos from the Princess Half and was thoroughly repulsed by all but one of mine.

I hated my photos. But, I also think we had less photos than most people because we weren't decked out in costume.

JENN: We'll have to think of costumes for our future races. Something that goes with glittery eyeshadow.

MOON: I wouldn't mind going as a lobster. I still think about that guy every now and then. I wonder if he ever found his claw... [To explain: there was a guy dressed in a full-on lobster costume whom we later saw running the wrong way to the side of the course because he'd lost a claw.]

JENN: Now THAT is a Disney movie in the making.

Clearly we don't have much constructive to say on the subject of running in makeup. Mostly, we want to hear from you! Do you run wearing makeup? When? How much? How does it work out for you? Let us know in the comments!