Never mind all those zombie 5Ks that are all the rage lately - let me tell you what it's like to run a race in a post-apocalyptic world.

But first, to back up: if you missed my recap of packet pickup and sneaker purchase, click here to read that. Caught up? Great. After I got my packet I drove to my very dear friend Elizabeth's apartment, which was a good half hour closer to the start location than my own. She was kind enough to make me french toast and let me crash on her couch.

I got up a little after 5AM the next morning; I quickly dressed, braided my hair, applied some suncreen-enhanced makeup for safety, and rolled out the door. Then came the part of the entire race process that terrified me most - getting to the start location. I am not a directionally savvy individual and I had terrifying visions of driving around aimlessly as the clock clicked ominously closer to the start time. But I needn't have worried; I found the correct pavilion in Quiet Waters Park without a hitch and with an hour to spare, no less.

I was glad of that hour, even if there was absolutely nothing to do there if you already had your packet. It enabled me to snag a good parking space and use the bathroom before the humongous line formed. I didn't need bag check, but I did see a table where it was available.

About twenty minutes to start time, I shed my sweatshirt - the weather was in the runner-friendly mid-60's - and headed to the start line at the mouth of a wooded area. There would be both a half marathon and a 5K that day, with the half marathon taking off at 7:30AM and the 5K starting about 15 minutes later, so the group was mixed. The organizers made some remarks on both safety (headphones discouraged? YOUR MOM IS DISCOURAGED) and the Light House charity organization that pushed the start time back to about 7:40AM or so, but that may well have been a stall to give the line for the bathroom time to clear.

There were no corrals whatsoever, or even suggestions about where to stand according to time. When the race started, it was a simple matter of moving forward in the general crowd until you crossed the timing mat. I wasn't particularly thrilled by this method, but according to race records 153 people finished this race. I don't know if anyone garnered a DNF, but even so that's, what, 1/10 of a single runDisney corral? So even if the lack of corrals was a bit disorganized, it's not like you were jostling for position with very many people.

Anyway, yeah - we were off! And for those first few miles through the woods, I started to feel seriously outclassed. The race description said that walkers were NOT welcomed, and I suppose that weeded out many of the more casual athletes, because I was getting passed far more than I was passing. But I was determined not to let it get to me - ultimately, we are all racing against ourselves, and all I wanted was to manage my 2:30 goal time.

The race took a loop of the wooded trail, then into the streets of the suburb of Hillsmere. By the time I hit the neighborhood, the crowd had thinned considerably; there was a handful of people in front of me and a handful behind, but I could've flapped my arms outstretched in any direction I wanted and still touched no one. I paced myself with a guy, then passed him as he started to slow, then did the same for another lady, and my morale began to pick up.

It was at this point that I noticed how lovely the Hillsmere area is, and as is so often the case by "lovely" I mean "on the water." Some houses were fancy and some were not, but several streets of houses had the river (I think it's the river and not the bay but I could be wrong) in their backyard and quite a few had their own docks. Needless to say, I stopped for multiple photos. 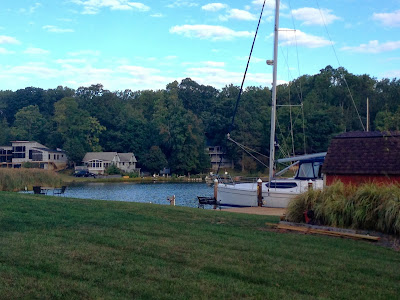 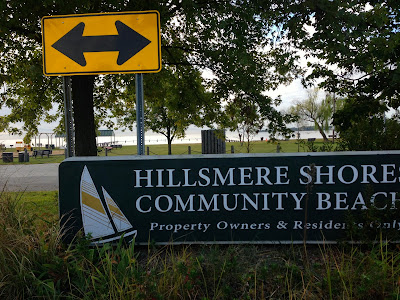 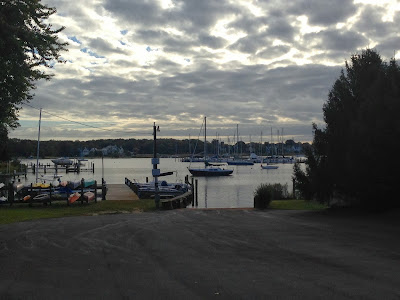 When I finally tore my attention from the scenery, I noticed something odd. I was - duh duh DUHHH - completely alone. Like, for serious. Look at this: 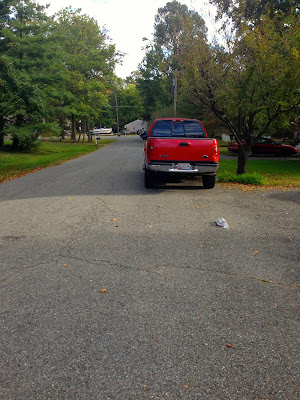 That tiny orange cone in the distance is a course turn. And nothing else to indicate that a race is even happening. Indeed, most of the time when I looked behind me there was no one there. It was crazy. I mean, I was running through a residential neighborhood. If I hadn't had a bib pinned to my shirt I could've been just another runner out for a training session. It was bizarre. Had I invented this race? Was it still even happening? Had the world ended while I was thinking about something else?

Aside from the oddness of having the course largely to myself, it also meant that every volunteer and sporadic spectator was honest-to-God cheering ONLY FOR ME. Which was the weirdest feeling of all! This made me feel two things. One: Awwww, that's so nice. Two: OH GOD THEY'RE CHEERING FOR ME AND I AM THE WORLD'S SLOWEST SWEATIEST HUMAN ARGH. But really it was kinda nice.

After the Hillsmere section, we (presumably we, but I couldn't swear to it) ran through another section of the park and then back around the original wooded trail.

This second loop was kinda painful for, again, two reasons. One: I had to run past the finish to complete the last four miles, which kinda sucked for obvious reasons. Two: the mile markers, which reflected both the first and second loops, started to double up. So I would run past a marker that said "13M" even though I knew I was only around 9M, and then around my mile 10 I passed a marker that said "1K" and I was all "DON'T PLAY WITH ME, SIGN." 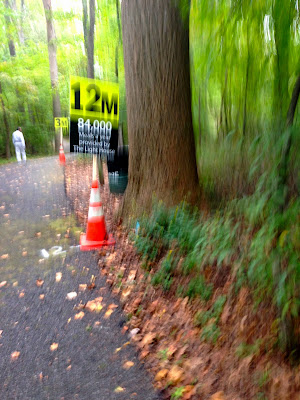 Coincidentally, I also have two main complaints about this race, and I think this is a good place to insert them. One was the water stops. There were three total stops, although you passed two of them twice. However, one of them you passed the second time RIGHT before the finish line, and who stops for water when the finish is literally thirty feet away? So really there were four, handing out small cups of water and nothing featuring electrolytes. No food-type offerings, which didn't really bother me, but I really think that more water stops with more options would be good.

My second complaint occurred during my final loop through the woods. It being a public park, there are multiple paths you could take. At each intersection, there were volunteers and/or signs to indicate which path to take. I don't how this breakdown happened, but during my second loop I came to an intersection with no markers at all. And of course, at this point there was absolutely no one in front of OR behind me. Now, I had run this part of the course before, but I had been concentrating on other things at the time. I came to a halt and frowned at the fork for a bit until, thank GOD, a lady came up behind me and confidently chose a path. I took off again, leaving her behind, and all was right with the world, but I'm pretty sure that little pause cost me at least 30 seconds.

All the while, I'd been running with the MapMyRun app going. I find that it is highly inaccurate by as much as a quarter mile, but I figured even if the split times it gave me were off it would at least give me a ballpark estimate. Based on that, it seemed reasonable that I would make my 2:30 goal. My official final time? 2:21:05 clock time, 2:20:52 chip time.

BAM. Tinker Bell, I GOT YOU.

My rankings weren't particularly impressive, but who cares in the face of a smashed goal? This time gives me great confidence about the Tinker Bell Half, especially as the course will be much flatter (while not hilly, there were a couple inclines on this one that made me very, very sad). At the risk of sounding conceited: GO ME! (Side note: the final finisher in the race finished in 3:08 or so. Can you image a runDisney race where the last person to cross the finish did it in 3:08? I'm telling you, this was one speedy group.) 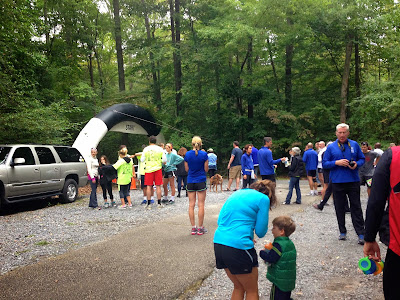 I wandered over to the food area, where bottles of water were available but, again, nothing with electrolytes. They also had apples, which I did not eat because I'm very picky about my raw apples. If it's not Macintosh, cook it in a pie or GTFO. But I did accept an orange slice.

And then. And then. I'm not one to get excited about bagels as a rule, so when I saw people eating them I wasn't overly enthused. Until I saw the logo on the box: Panera. I had a cinnamon chip bagel in my mouth so fast it would make your head spin like the star of an exorcism movie. Deliciousness. I also poured myself some coffee as I was starting to get a bit chilly.

And that was it! I headed back to Elizabeth's where she was kind enough to allow me borrow her bathroom for a warm shower. And I know you're not supposed to take a warm shower post-race, but look. Under normal circumstances, if you were to prepare me a warm shower, I would frown and politely inquire if it wasn't possible to pipe some water up from one of the more fiery pits of Hell. Warm is an ice bath for me.

Let's see, what else...  then we watched The Cabin in the Woods, and it was hilarious, so you should go pull that up on Netflix right now. That's about all there is to say about it, I think, except maybe that my Nike Pro Fits are officially retired. Good show, everybody!