In Which Jenn's Lungs Mutiny

This story begins, as it so often does, with the gym breaking down.

It's kind of my own fault, really. No, not the gym breaking down; just the part where it screws me over. See, I was supposed to run on Sunday, but my Saturday suuuuuuucked and I was feeling tired and down so I skipped it in favor of sleeping. I'm not saying it was the smart thing to do, I'm just saying it happened.

So on Monday I traipse down to my apartment complex's gym, feeling kinda ready to run for a change, and what do I find? The power's out. Not in the building, mind you - just the gym.

I immediately fired off an email to the (by now closed) leasing office, but that still left Tuesday and the unfortunate possibility that things would not be fixed in time for my next run. Thus I made a bold decision - not only would I attempt another outdoor (ugh) morning (UGH) run, I would do so in the COLD.

I used my suddenly free Monday evening to hop over to Target and drop a small fortune on cold weather running gear: long running pants, a vest, a hat, and some cheap touchscreen-compatible gloves. Add the long sleeve tech shirt I got from the Light House Half Marathon and I was ready to roll.

Which is why my alarm clock went off at the ungodly-unless-we're-going-to-WDW hour of 5:45AM. I put on my fancy new duds, tossed back half a pack of Clif Shot Bloks, and...

Look. I'm not generally given over to selfies. Not that I harbor a refreshing lack of vanity or anything noble like that; I just tend to put so little effort into my face on your average day that I don't particularly want to share it (extra vain!). Even the below photo is marked by unflattering lighting and a complete lack of makeup, but something told me to take this photo. Something told me that there would only be one way to sum up my feelings on the cold weather running experience.

And I was right. Observe: 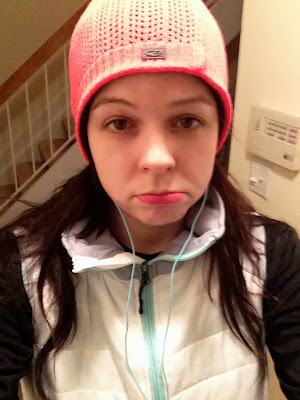 I look so sad and apprehensive, no? I wish I could say it was for nothing, but I experienced exactly the difficulty I feared, a problem that first began to plague me a mere three years ago: I COULDN'T FREAKING BREATHE.

Okay, that's an exaggeration. At no point did my respiratory system shut down. But less than a mile in my lungs were already starting to rebel. I just couldn't quite get a full lungful of the cold cold air; three quarters of the way and my chest would constrict. After a mile and a quarter I knew it just wasn't happening. It pains me to say this, but I had to quit. I went home, took a shower, and went back to bed.

Happy ending! The gym WAS fixed by Tuesday evening, and I knocked out another twelve miles in the safety and comfort and nice friendly air of the indoors. But still, I'm bummed. As much as I tend toward the treadmill, it's good to know that the option to run outside is available if I need it. As long as winter continues to, y'know, be winter, I'm outta luck.

Also, now I have long running pants for no reason.

In conclusion: obviously, I need to move to Orlando, where current highs are in the mid to upper 70s. I mean, am I right?

Long shot, but - has anyone successfully conquered this problem?