The trip report continues with restaurant reviews! Click here to see all the posts for this report.

'Kay, so, I think for the most part I covered the counter service food in the reports themselves, but there is much to be said about table service restaurants. We had one per day, so strap in, kids!

How do we start this culinary tour of Walt Disney World? Why, with a little place you may have heard of on top of the Contemporary called the California Grill. And yes, we got a Magic Kingdom-side window seat. Easily, even. (Want to pull off the same trick? Make your reservation between 7 and 7:30PM and just stretch that sucker out until the fireworks.)

First things first - drinks! My mom is not a big drinker and I'm not about to get wasted with my immediate family anyway, but we did want to mark the occasion with a little something. I convinced my mom to sample the Rosa Regale, a sweet red sparkling wine from Italy. I first tried this when Elizabeth did the World Showcase wine walk thingee; you know, where you go to Germany, Italy, and France and get two wine samples in each country? Anyway, in Italy we tried Rosa Regale and it was delicious.

For myself, I hemmed and hawed and eventually settled on an item from the cocktail menu - the Cucumber Fizz. The concoction involves gin, limoncello, cucumber water, and a dash of Sprite. Delicious. Highly recommended if you don't mind a vegetable in your drink. 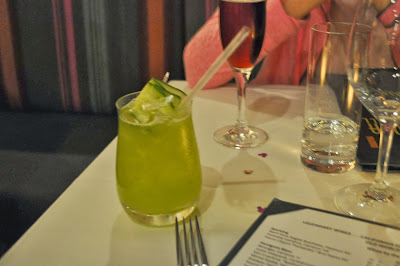 As I have mentioned before, my mom is a mostly-vegetarian who occasionally dabbles in pescatarianism, which is a word spellcheck refuses to recognize in any form so I will clarify that she eats fish sometimes. As such, order round one consisted of the tomato and mozzarella flatbread and the carrot soup with whitefish.

I was a trifle nervous about the flatbread after reading a less than stellar review on Eating WDW, but it was vegetarian-friendly and I love mozzarella so we went for it anyway. Maybe they finally worked the kinks out of the recipe, or we just lucked out, but ours was good! The mozzarella wasn't as sublime as what you can get at Tutto Gusto, but it was tasty, and the roasted tomatoes were fantastic. We saved a few slices for breakfast. 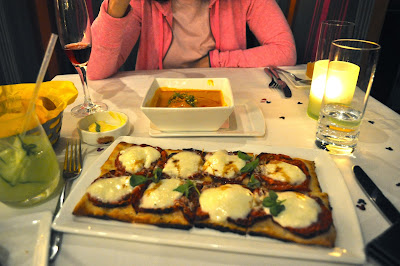 The carrot soup was also very good, with a robust flavor, but the whitefish didn't have much taste. It was nice to have a bit of texture variance but that was about all it added.

After careful thought, we selected as our next course one heirloom apple salad per person and a Sonoma goat cheese ravioli to share. 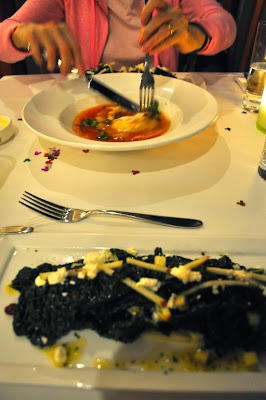 The salads were good, and interesting in the fact that the greens were cooked, but unremarkable. Normally a good salad is enough to keep me happy, but these were expensive salads, so I feel like greater effort should have been expended to make it stand out. The ravioli, on the other hand, was fantastic. I mean, if you don't like goat cheese, it's not going to make a believer out of you, but if you're a fan you'll be thrilled. And the broth it comes from? Amazing. Save some bread of soak it up. Which reminds me - our bread basket contained regular rolls and focaccia bread. Skip the rolls and go for that focaccia.

We were angling to occupy our seats long enough to see Wishes, so we followed this up with some dessert wines. I failed miserably as a blogger and forgot to both write down what they were AND take a photo, but my mom's was subtly chocolate-enhanced and mine had an orange flavor. Nice but thick and sweet as after-dinner drinks are wont to be.

For dessert, I tried to get my mom into the Nutella chocolate cake, but she wasn't having it and I was too full to finish one on my own. Not that it ultimately mattered, but when we ordered the seasonal pumpkin creme brulee, our server brought us two because we were celebrating birthdays. Needless to say, we didn't finish these, but we made considerable dents as it was pretty awesome. Nicely pumpkin-y without being overwhelming in the spice area, and garnished with a gingerbread cookie. Oh, and a chocolate "Congratulations" sign because according to our server they didn't have any birthday signs. 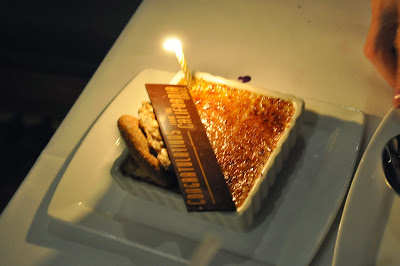 Overall? We had good service, miraculously, even though I'm hearing unfortunate things about the experiences of others; maybe they're finally getting over their re-opening pains? The atmosphere was lovely, especially with our fabulous castle view and prime seating for Wishes. The food was very good - but. Even ordering only appetizers and a couple drinks and even with the Tables in Wonderland card it was very expensive, and not in a "Yeah, but it was SOOOOO GOOD" kind of way. I'd happily go back if I was with others who wanted to try it, but I'm not scrambling to make ADRs for myself.

One last note: you know how they have a lounge where you can eat and drink and watch Wishes without a reservation? We were at a table right at the edge of said lounge, and the people who were there when we sat down were the same people who were there when we left after the fireworks. If you're banking on the lounge for your Wishes viewing needs, I'd arrive at... well, at opening, really.

Really quickly, let's talk about afternoon tea in the Garden View Lounge! Moon and I have covered this experience fairly thoroughly already, but as some changes have been made I wanted to add an addendum.

Thing one: formerly the Grand Tea offered the trifle as a dessert option but the cheaper Buckingham Palace did not. No more! You can now get the trifle if you like as part of your Buckingham Palace tea service. However, the trifle might not be strawberry - we were told it was pear this time around. I've never known them to have seasonal flavors before, so that was interesting.

Thing two: your scone now features THREE accompaniments! You still get your preserves and Devonshire cream, but they are joined by delicious, house-made lemon curd. Awesome sauce. Literally. 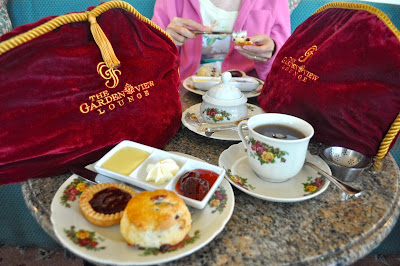