Hi guys! Time for another glorious trip report, highlighting our time in the Disneyland Resort. For the sake of flow, this report will be written by Jenn with Moon popping in for notes - don't worry, these will be clearly delineated. As with my last trip report, a lot of food reviews will be held for a later post, so stay tuned for that. Hope you enjoy! To read all the posts in this report, click here.

The morning started with a 6AM alarm on the principle that the longer we pretended we were still on the east coast the less painful our 3AM wakeup time for race morning would be. Of course, pretty much nothing whatsoever is happening at 6AM, so we basically did nothing for several hours. Vacation!

MOON: I have no recollection of this at all, but I do remember keeping my clock on Eastern Standard Time for the entirety of the trip!

Eventually Moon took a shower, we dressed, and we headed on down to the Expo, which was held in the convention area of the Disneyland Hotel (have I mentioned how much I loved walking EVERYWHERE?). As a random aside: the bagcheck lines on our side - that is to say, the non-Disney hotel side - were generally shorter. Just some information for you.

We wandered through the Expo with slightly perplexed expressions before finally doubling back and finding signs directing us to registration, which was underneath the building (a parking lot, technically, I think?). We were able to check in fairly quickly, and then was hardly any line for the team stuff (which was essentially a bib and a sash. Can I forgo the sash and not pay $15 next time? Just a question). 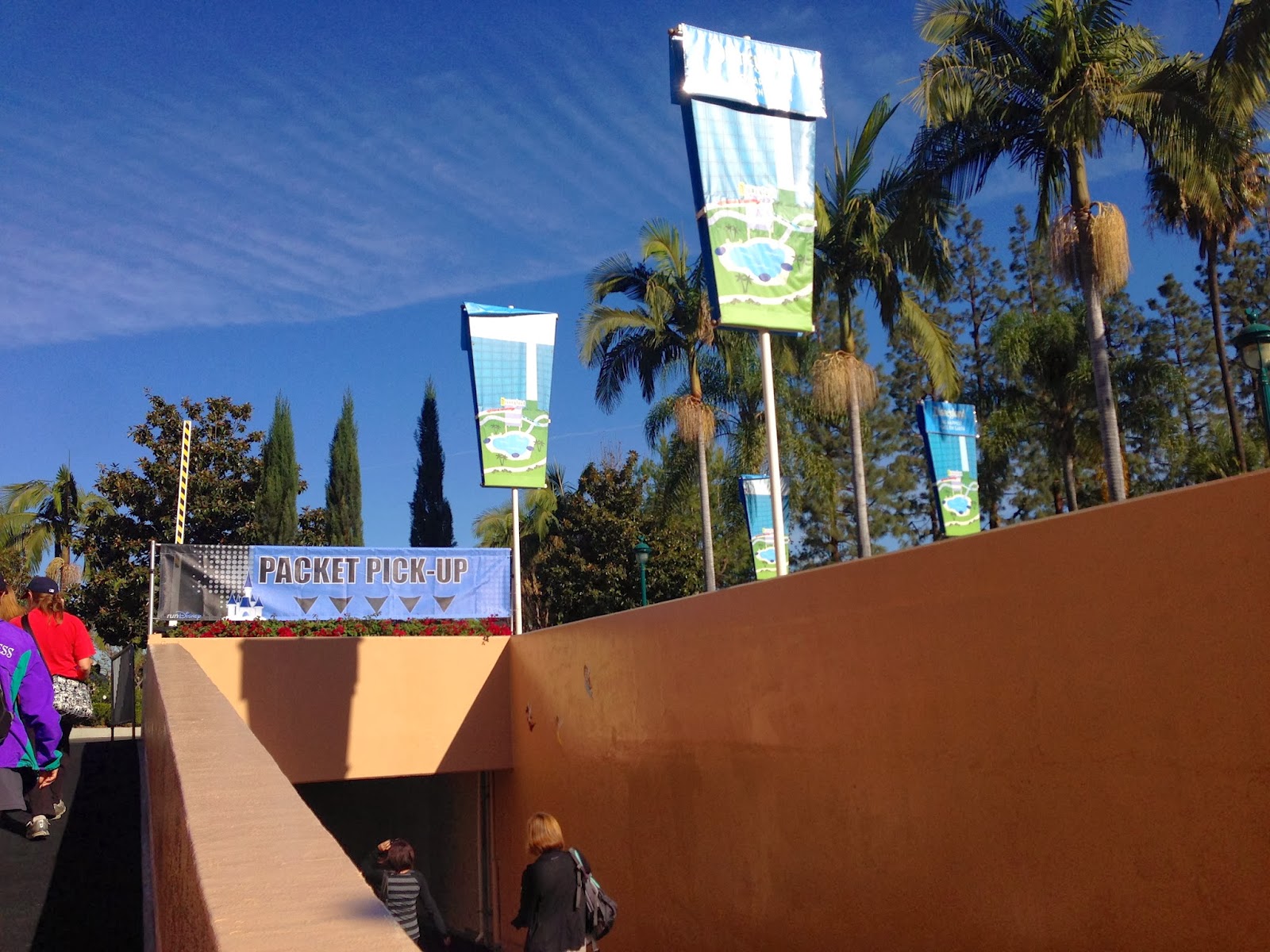 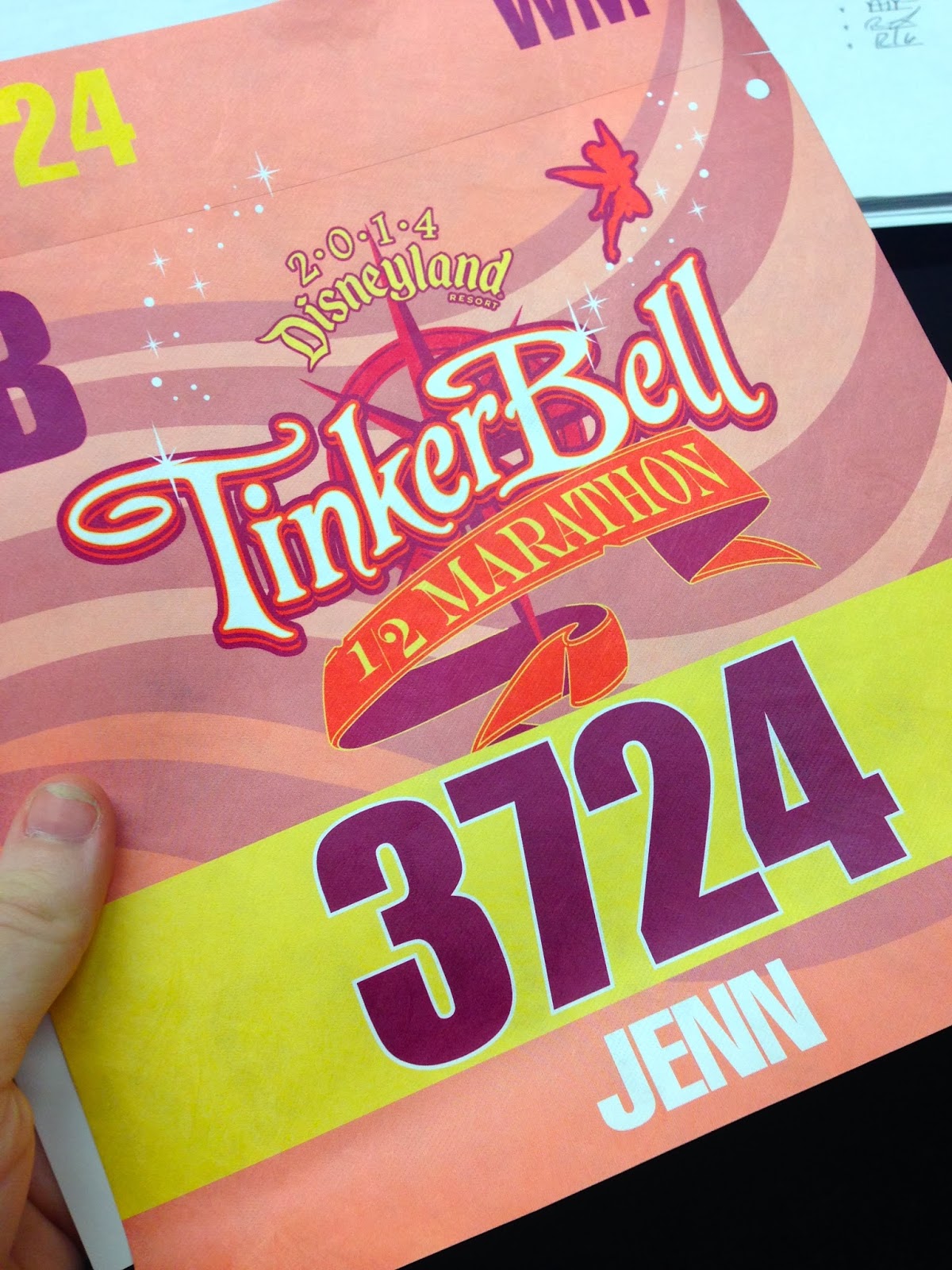 As we were walking toward the exit we saw that GET Travel was still offering discount Disneyland tickets, and as we had accidentally missed the cutoff date for online ordering I was like YESSS and hustled us into line. We got 3-day park hoppers for $1 more than a regular-price non-hopper. Score!

And the guys at the booth were actually really funny, especially the one who sold Moon her ticket. He jokingly suggested we travel together, so I introduced myself to Moon and shook her hand. Guy was all, "...I thought you guys knew each other...?" "We do." "Oh, that was pretty good. You should be an actress!" Which would make me a pretty unique specimen in southern CA, no? ;)

Important piece of foreshadowing: this is roundabout the time Moon mentioned feeling like she had a bit of a cold.

MOON: I had been feeling a bit congested in the mornings for about two days, but I thought I had kicked it before we left…

We headed back up to the Expo proper and got our race shirts and bags, then began wandering through the stalls. I was disappointed not to see Brooks represented as a would love another pair of Ravennas at a discount, but alas, it was not to be. The only other vendor I really wanted to check out was Raw Threads, but their stuff is expensive and I didn't find a sale section. :( Actually, I was quite disappointed with the lack of sale sections in general. I saw some minor percentage-off offers but nothing particularly tempting. 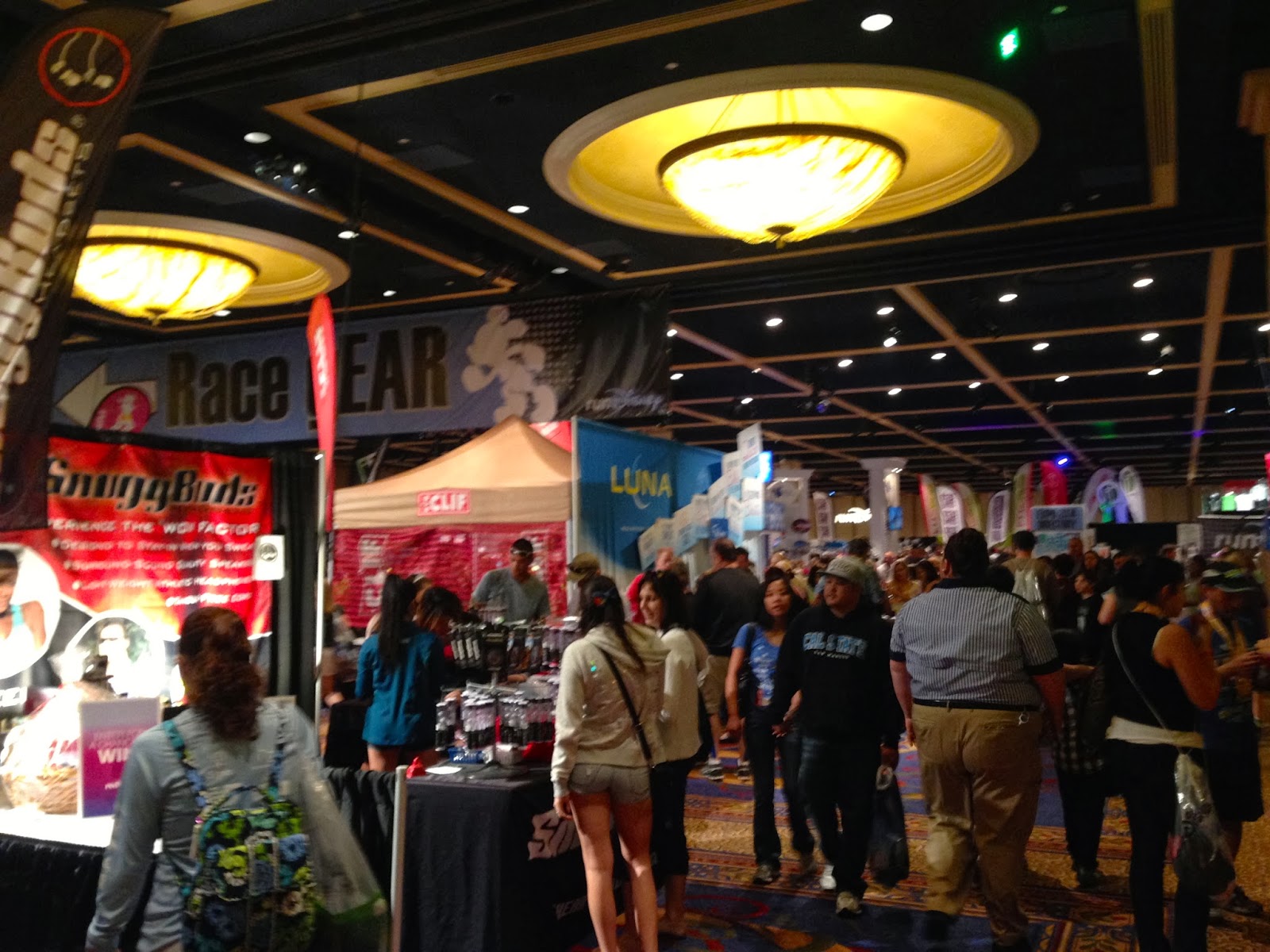 Speaking of not particularly tempting - we got in line for the official merchandise tent and essentially walked right in. So... I don't know how much of this is just because we didn't arrive until Saturday; I'm sure that there was merchandise that had already sold out. But there were still t-shirts and tech shirts and sweatshirts available, and I found them all underwhelming. If they had been cheaper, sure, I probably would've picked something up, but $55 for a basic sweatshirt with a screen-on logo is not gonna hack it for me. I didn't even see a wine glass to pick up. We walked out empty-handed. :/

Things started looking up on the way out, as Luna was giving out little samples of their protein bars. I tried a couple, cookie dough being my favorite and carrot cake my least. Fun!

Our next stop was at FlipBelt, which Moon found intriguing. She tried one on and I'll let her insert her own thoughts here.

MOON: I would be interested to give it a try, actually. I’m not a huuuuge fan of armbands (most of the them are too big for my arm, anyway). I worry that it will ride up and then prove to be awkward, but I’m supposing it’s worth a try, right? It would make running with keys much easier (my pants lack pockets). 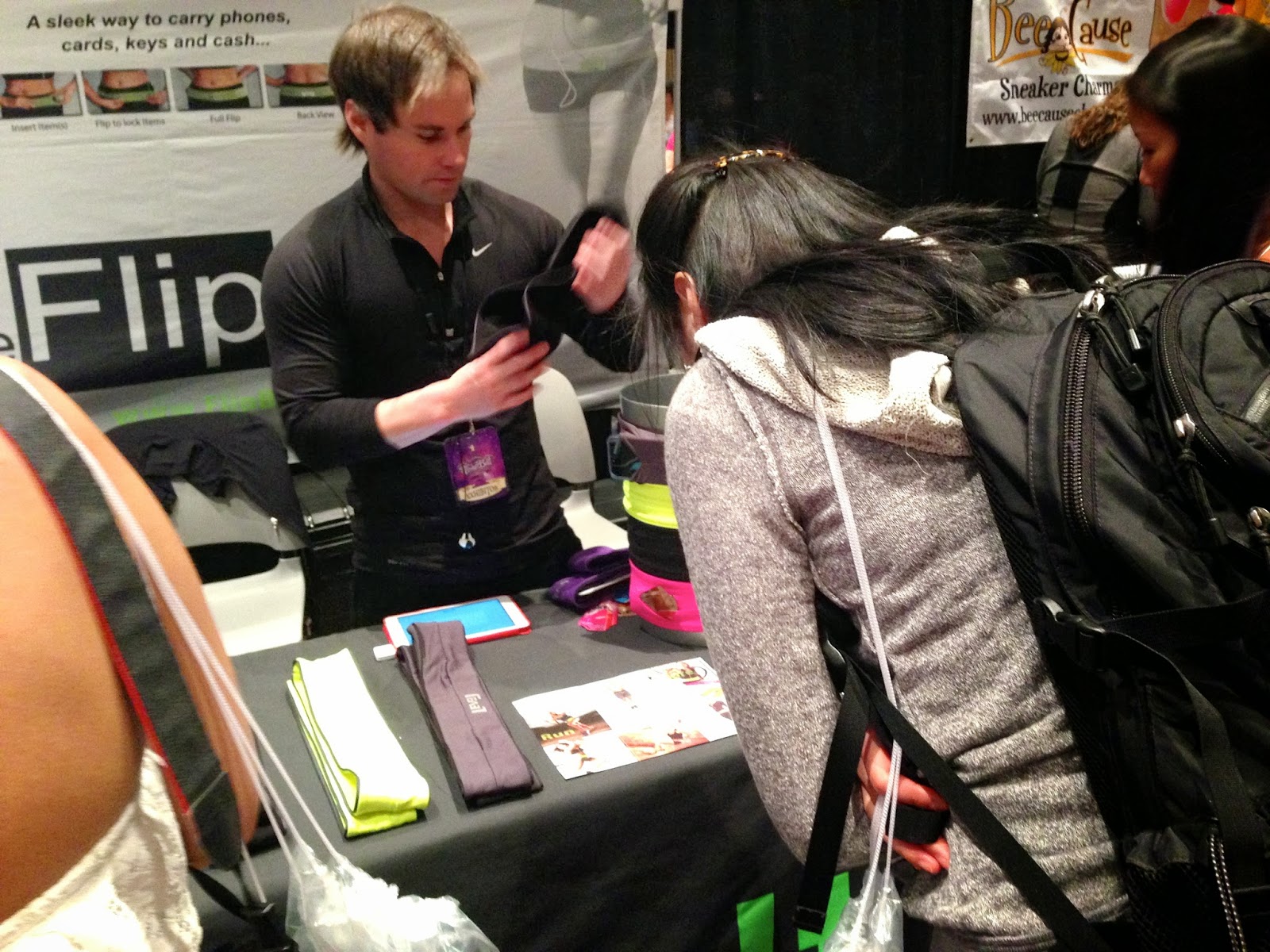 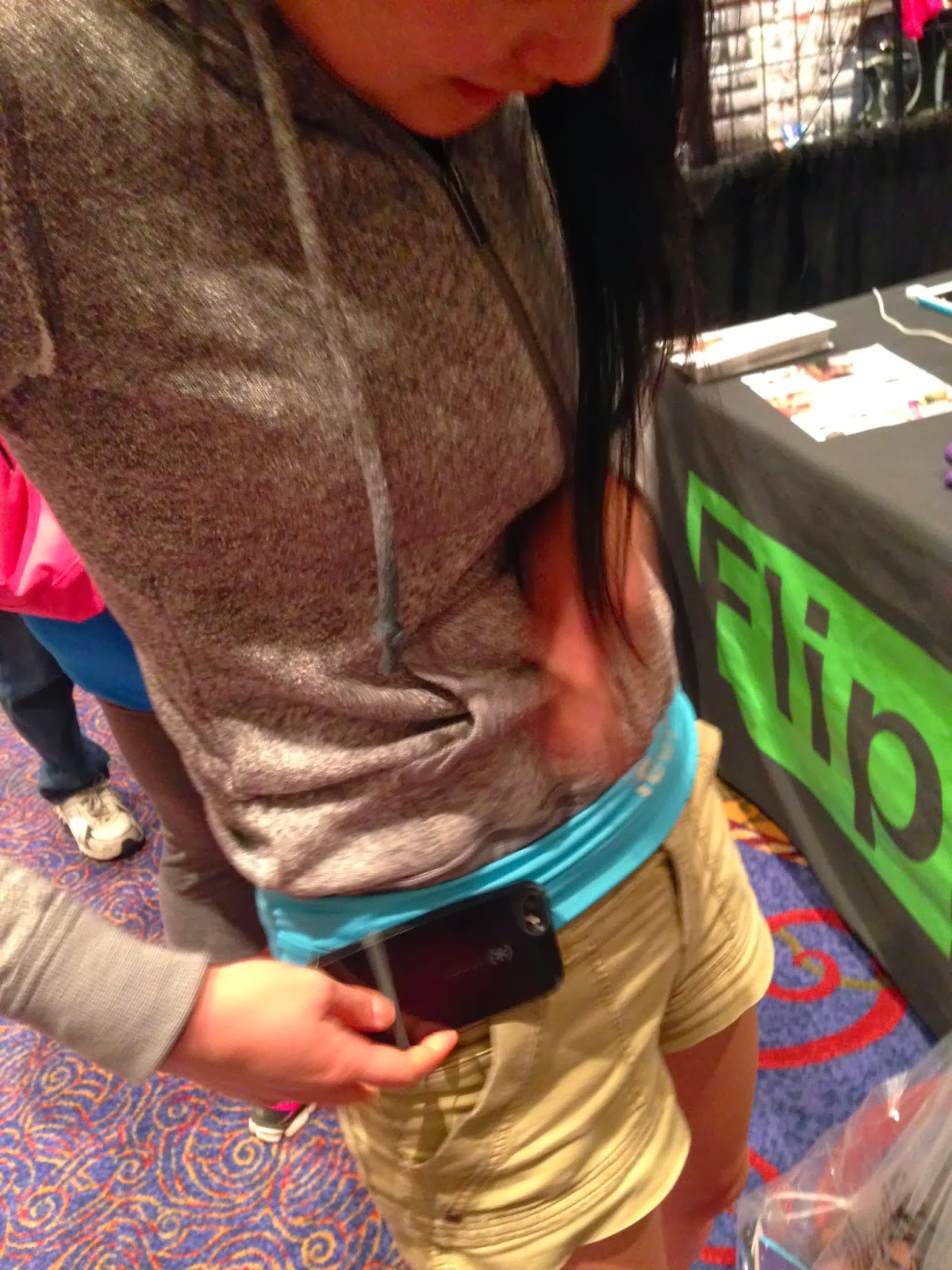 Other than that, we just kinda threaded through everything, shrugged, and left. Expo booth people - offer more discounts! You'll never get an impulse purchase outta me otherwise!

It was close enough to lunchtime to justify getting lunch and Earl of Sandwich was RIGHT THERE, so we hopped into line. Review to be included in food post. Spoiler alert: the story includes a sidetrip to Ralph Brennan's Jazz Kitchen Express.

From there we returned to our hotel, with a brief pit stop at the front desk to request more blankets as Moon was, um, getting the chills. >.< Once in the room, I went ahead and made her my Special Travel Drink: chai green tea mixed with orange EmergenC. Based on the faces she made I don't think she particularly enjoyed it, but she got dosed with vitamin C, and that's what counts. She napped for a bit while I took notes and inspected our race bag contents. 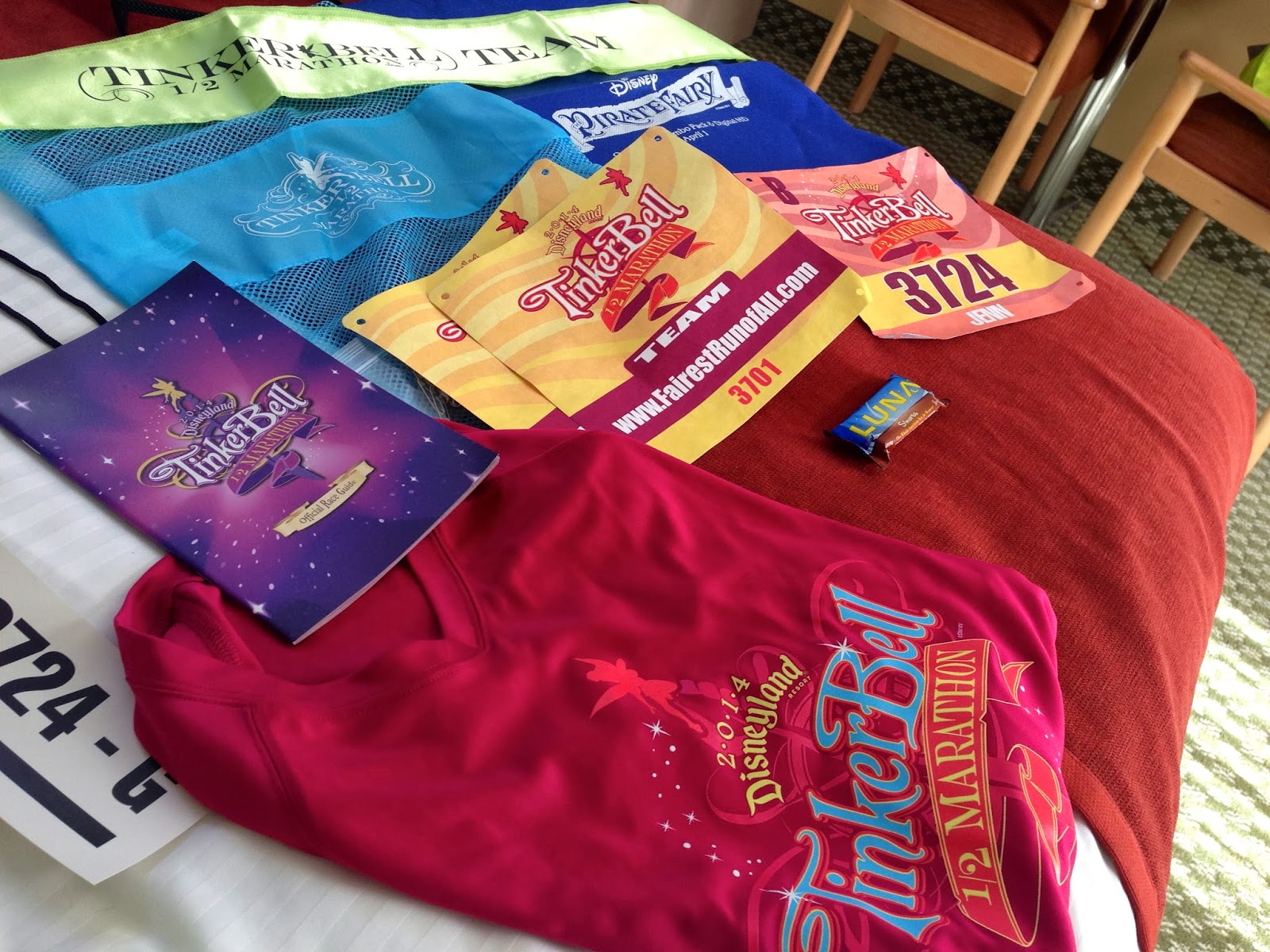 After a time, we decided to head down to the hot tub. Unfortunately the hot tub at the HoJo Anaheim is RIGHT NEXT to the kids' play area. Which I get, I suppose - that way parents can soak while they keep an eye on their underage charges. But it made for a LOT of small children who, despite the signs, were playing around in the hot tub unsupervised, or supervised poorly. We got splashed a lot and eventually gave up and went back and took showers.

Moon was really starting to feel sick at this point (I'm sure she'll tell you more about that) and it was making us both nervous, but she had every intent of soldiering on through the morning's race so we proceeded with the plan: dinner at the IHOP right across from the Disneyland gate. We got eggs and shared pancakes and the view was probably the best IHOP view ever, but Moon was looking more miserable by the moment. We trekked back to our room with uncertain steps.

MOON: I’m going to take a paragraph here to detail my woes. USUALLY when the cold hits I begin with a sore throat. It’s a clear indicator that things are about to go down. I also have this crazy method of beating colds which I will not detail here so the audience doesn't think I’m into black magic or anything. Annnyway… This time it did not go down that way, so I was thinking, “Yeah, I’ll be fine. It’s nothing.” As Jenn said, after the chills I started to get kind of worried. I think I consumed all the vitamin C within reach. Under no less than three blankets, I figured sleeping would be my best bet at a quick recovery. Jenn suggested we go down to the hot tub, but I just grabbed three towels and spent most of the time napping. Being sick blows.

Yet, undaunted, we set out all our things for the race - sneakers and clothes and fuel and what have you. Then we settled into bed and cheered ourselves up with the masterful re-enactments of a TLC show called "Sex Sent Me to the E.R.," which was exactly the sort of quality documentary you would expect. With that to send us off to sleep, we drifted into dreamland.

And then woke up half an hour later to the blasting echoes of the Disneyland fireworks.

And then we went to sleep.

Does Moon make it to the race? Does Jenn have to carry her into the corral?! Come back soon to find out!!