In Which Jenn Recaps the Marine Corps Marathon Expo

And now - my recap of the Marine Corps Marathon experience! Yay!

My marathon adventure began with a quick trip on the Metro. I live just outside of DC already, but it would've been a pain getting to the race start from Bethesda, so - SLEEPOVER WITH NICOLE in DC proper! Yay!

Nicole picked me up from Dupont and after a brief stop at her place to drop off some of my stuff we sped off to the Expo. 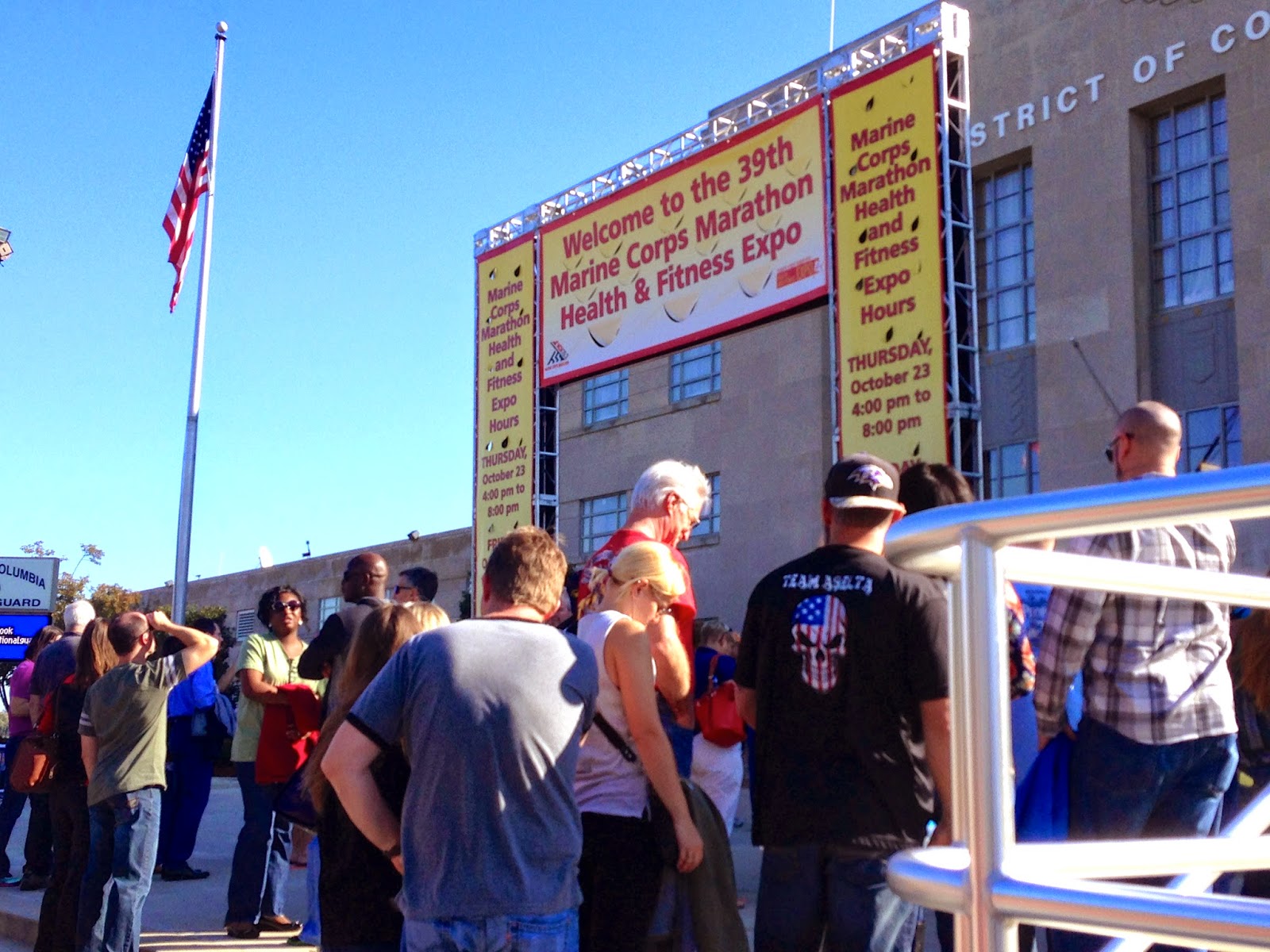 People. Do not go to the Expo on Saturday. We waited in an ENORMOUS line. I'd say we were in line just to get in for twenty, maybe even thirty minutes. Not unbearable or anything but certainly not ideal. Oh, and if you already have your bib and just want to pop into the expo to look around? Sorry, you have to wait in line too. They had enforcement guards and everything.

Once we made it into the building and past the bag search area, though, it wasn't too bad. We headed into the basement to pick up my bib, then back up for my race shirt. This race shirt was brown and yellow, which is not super attractive by itself, but it also had a MOCK TURTLENECK. Ugh. I cut out the necks of my t-shirts because I hate the feeling of fabric all up on my neck, so you can imagine how I feel about turtlenecks. BLARGH.

Needless to say, I decided to wear the shirt the next morning as my coverup and chuck it at the start. Sacrilegious, maybe, but also fortuitous as the shirt I had originally planned to wear for this purpose had been peed on by my cat. (Thanks Minxie.) So that worked out.

There were some tables set up for "free samples," but we didn't see anything tangible. I'm guessing that's another reason to come earlier in the week.

We breezed on through the Brooks MCM Stuff area because I am trying my darnedest to actually save some money for once (but there were definitely some cute shirts if you were in the market; and none of the excessive merchandise shortages you see at runDisney expos).

From there it was SAMPLE FRENZY. For starters, I hadn't really had lunch yet, so I was crazy hungry. We first hopped in the sample line for Clif, which included various flavors of Bloks, gels, regular bars, and Builder bars. Nothing out of the ordinary but it took the edge off. Clif was also the pace group sponsor, and I grabbed a 5-hour pace band.

We also sampled sorbet from Yonana, gels and waffles from Honey Stinger, and various flavors of nuun, all of which were interesting to try but none of which stood out to me. I've tried Honey Stinger gels before and they didn't seem to do much; the waffles were tasty but felt insubstantial. As for nuun, I hear great things, but cheaper and more generic Ades don't bug me so I don't know it's worth the money for me personally.

The most exciting part was when we stopped by the runDisney kiosk. There was no information there we didn't already know, but it was nice to see the medals AND Nicole and I scored runDisney reusable shopping bags! Yay!

By that time I was kinda all expo-ed out (I know, I'm lame), so I grabbed a soft pretzel from the mini-cafe and we headed out. I'm guessing by that point it was around four in the afternoon and the line to get in STILL wrapped all the way around the building.

We Metro'd back to Nicole's place and dropped off our new acquisitions before heading out to CVS for more supplies. I picked up a Clif bar and a Gatorade for the morning and Nicole grabbed some stuff for sign-making. (Her sign was Phantom Tollbooth-inspired and awesome. You should be so lucky as to see it someday.)

By that time it was 5PM and more the late enough for going-to-bed-early types to be pondering dinner. Nicole put together a magnificent spread of roasted veggie pizza, dumplings, and brussel sprouts for me, all washed down with a sports drink while we watched Mulan (complete with "I'll Make a Man Out of You" singalong because I can't not) and The Princess and the Frog.

And then it was bedtime! I drifted off to sleep to the dulcet tones of somebody in a Lifetime movie positing that a high school girl was possessed by the devil. Can you thinking of anything more auspicious?

Next up: the race itself!