In Which Jenn Recaps the Marine Corps Marathon

Click here to read my recap of the MCM Expo and the beginning of my marathon adventure. All set? Great! Then we shall proceed. To Marine Corps Marathon Day itself!

I woke to an alarm at 4:45AM and felt surprisingly okay about it; I didn't even use any of my built-in snooze time. Instead, I hopped off the couch, ate, dressed, and did a quick inventory to make sure I had everything I needed.

The magnificent Nicole gave me a bottle of water, pretzels, and Teddy Grahams before graciously walking to the Metro. She sent me off with a "You'll be awesome!" to which I responded "Eh..." There was a Marine stationed outside the turnstiles who promptly informed me that I would definitely be "AWESOME!" so that was a nice start.

I jumped on the first train to show up, which turned out to be the silver line, so I got off at Rosslyn to switch to the orange. Another silver train came through and took off with some MCM participants still on it. Luckily it was so early that I'm sure they had time to figure out their mistake and turn around, but I wonder if anyone missed the marathon start because of train confusion?

An orange line train eventually appeared and carted me and several gazillion other runners and spectators to the start area - which turned out to be one helluva walk. Like getting to your runDisney corral long. No matter; I had plenty of time built in. I ate my Nicole-provided snacks, used the bathroom a couple billion times for safety, and planted myself about a quarter of the way into the 4:30-5:00 hour finish time corral. 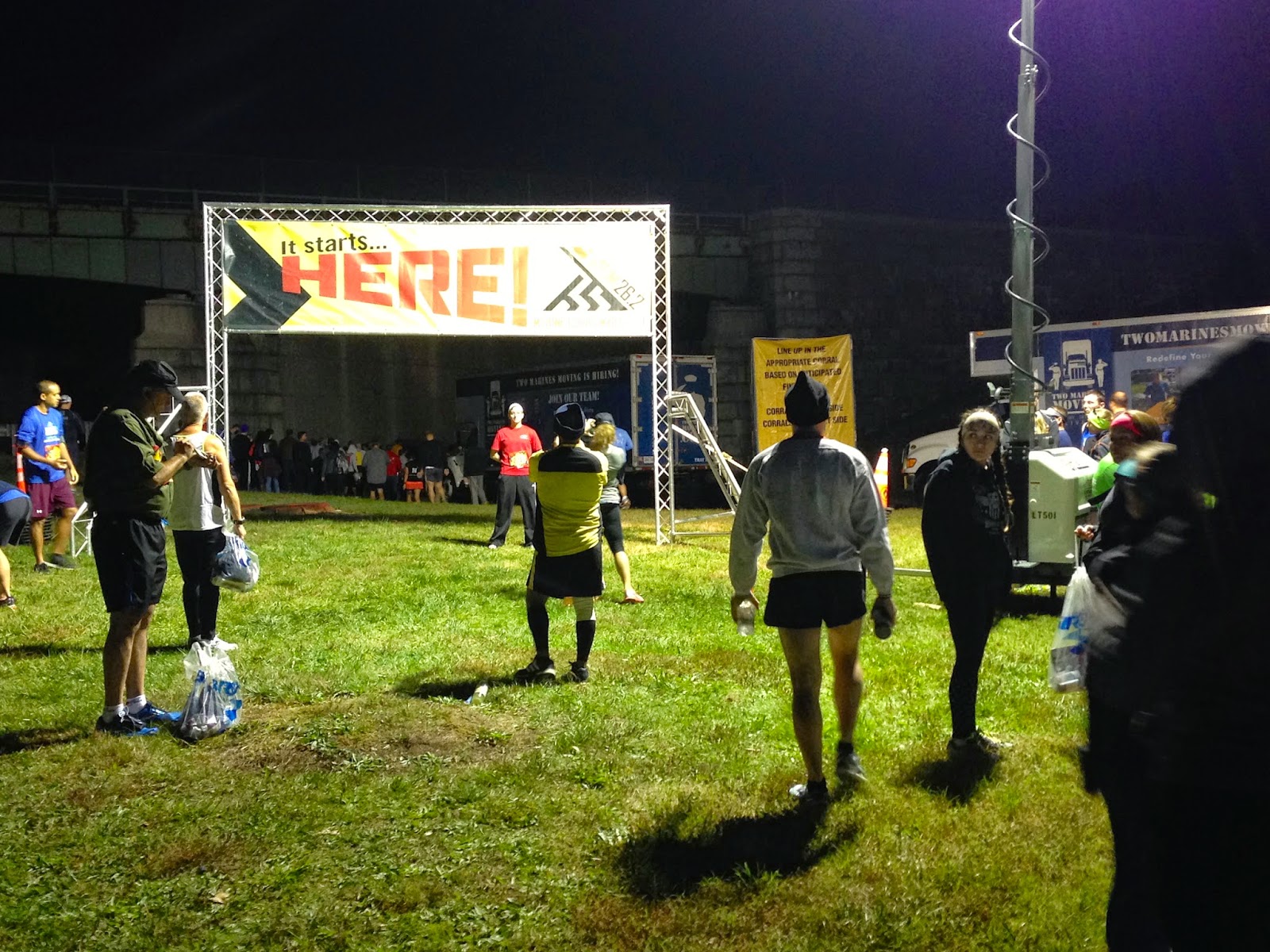 The pre-race ceremonies were actually a lot less elaborate than I expected, maybe because I was near the back? I mean, there were certainly some interesting moments, including skydivers and a flyby by those weird plane-copter hybrids, and there was of course the national anthem, but that was it. 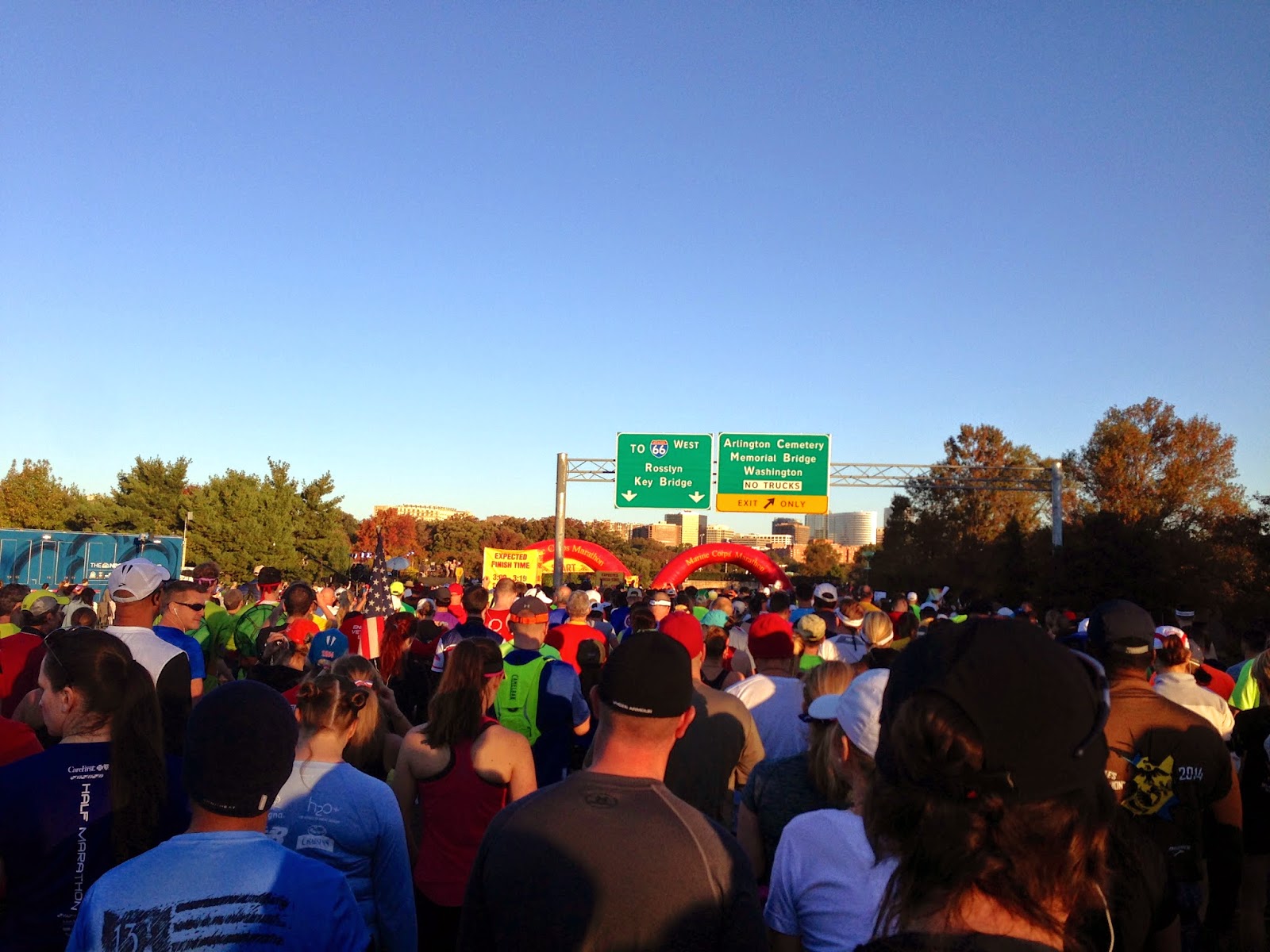 The corrals began moving forward at precisely 7:55AM, but it was almost fifteen minutes before I hit the start. I took off as I passed under the arch, and to my great relief I felt good! The first mile or two had some hills, but nothing so steep nor so lengthy that I had to stop and walk (looking at you, Marine Corps 17.75K). I briefly pondered ducking into Starbucks as we ran through Georgetown, but ultimately decided against it... 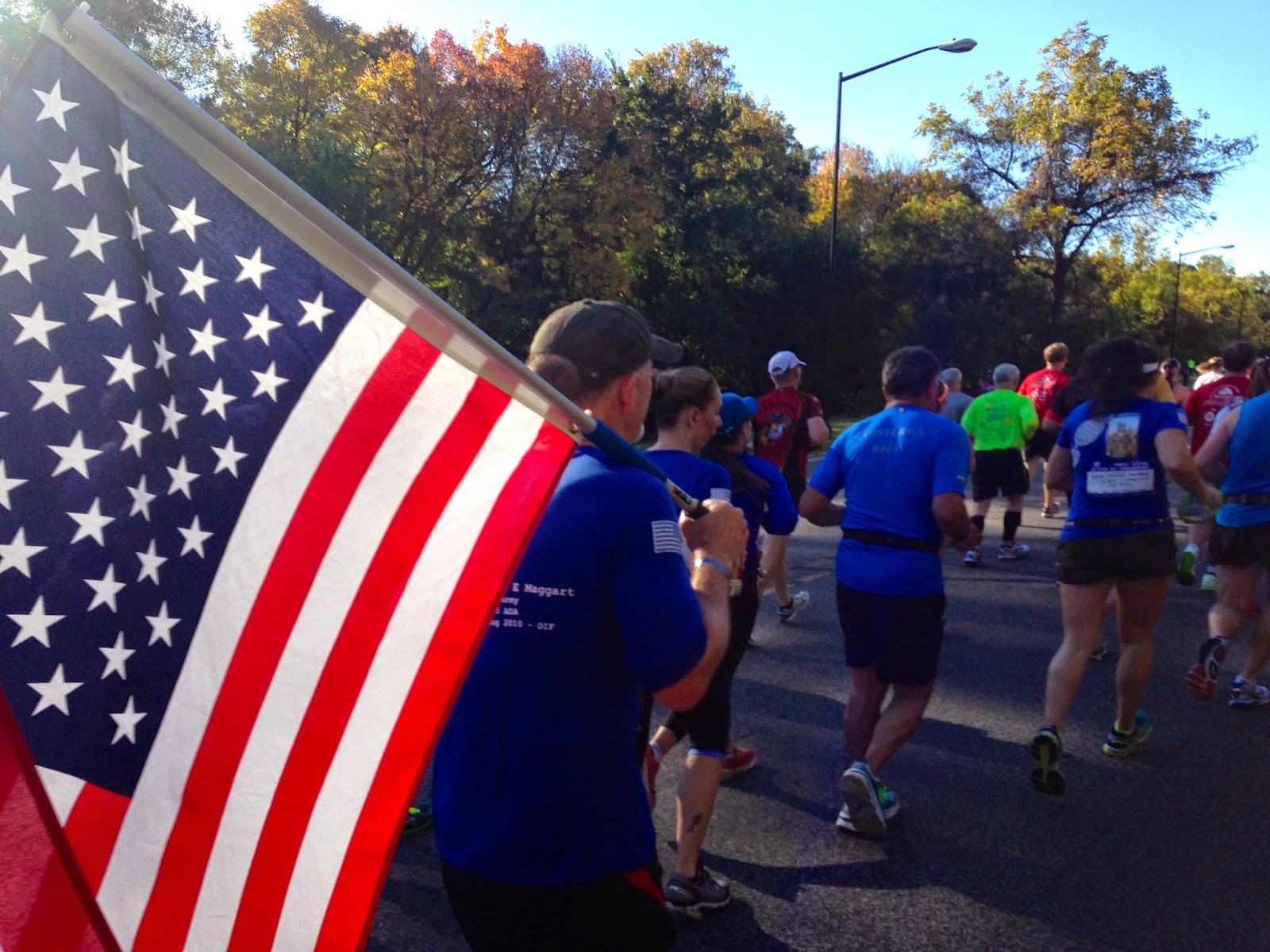 Shortly after that we were running through Rock Creek Park, and it is here that I would like to make an observation. I sincerely believe that I have never seen, nor will I ever see, more men peeing in the woods at one time than I did while on the course. You could say it was a PR in urination.

At this point I was still feeling excessively cheerful about the whole running thing. I was keeping a decent pace, my lungs were cooperating - I was just generally having a good run. My phone decided to play me the Walt Disney World Marching Band's "Disney Medley," so if you at any point saw a runner mouthing "Zip-A-Dee-Doo-Dah," everything should make perfect sense now.

From there we were running along the river toward the National Mall. Once I hit the mall I spent about three miles attempting to coordinate with my boyfriend who was there to see me, but we missed each other on every attempt. Boo! The good news is that this kept me solidly distracted for those three miles (although this did mean I almost missed Nicole's second Shot Blok hand off; she had to run into the fray to hand them to me. She's the people's champ).

After the mall it was time to Beat the Bridge. I was in plenty of time, so there was no reason to worry about not finishing. Unfortunately, this was when things started to go downhill for me, in the (sadly only) metaphorical sense. The bridge occurs around mile 20, so you could argue that I hit the wall. But I didn't feel sick or exhausted or doubtful of my own abilities. It was more that my hips and legs had started to protest all this work and I was running along boring highway and I just wasn't into it anymore. It wasn't that I didn't think I could. I knew I could. I just didn't feel like it.

So at that point I did stop and walk a little. But I soon picked up the running again and found that, leg discomfort notwithstanding, I could keep running at an okay pace. So I did. Then we hit Crystal City, which reminded me of downtown Georgetown from earlier, and that made the scenery a bit more interesting. Wasn't crazy about being sprayed down with the sprinkler (ELECTRONICS!!!!) but whatever.

I know what you're all really wondering: did I eat the Dunkin Donuts Munchkins at mile 24? I hate to disappoint you all, but I did not. I just plain was not hungry as I passed. In retrospect, however, I think I made a mistake. What I SHOULD have done is accepted the cup of Munchkins, run about a mile with them, passed them off to my boyfriend, and told me to save me some. Ah well. I know for next time.

Which reminds me! My boyfriend texted me about that point that he had taken up a position about a quarter mile from the finish, and this time as I passed I had no trouble locating him. I gave him a giant hug and quick kiss before taking off again. ALMOST THERE!

Hey, you know that legendary hill right before the finish? It was mean, no question, and I did not enjoy it, even less of a question, but it wasn't nearly as bad as I had imagined. Yeah, the tilt was kind of steep, but the duration wasn't too terrible and there was so much motivation at that point - the route is lined with Marines and the finish is RIGHT THERE. I powered right up that hill because, let's face it, it was barely a bump next to the crap I put up with during the 17.75K NO I WILL NOT LET THAT GO.

And then I finished! How fast did I finish? Well. My goal time going in was five hours. My final time was 4 hours, 59 minutes, 42 seconds. How's that for accuracy? I was a little sad I hadn't been faster, but ultimately I made my goal. Not bad for a first marathon ever.

I got in line for my medal and thoroughly discombobulated the poor Marine who gave it to me. It went like this:

Look, I wanted my own rifleman's creed or whatever, okay? SHUT UP.

I got my photo taken in front of the Iwo Jima statue, then proceeded through the finisher's line collecting the usual bags, beverages, food box (unimpressive selection, guys), space blanket, etc. From there I headed to the post-race festival area and briefly considered attempting to buy a shirt or something, but it was so crowded I decided to scrap everything in favor of going home. 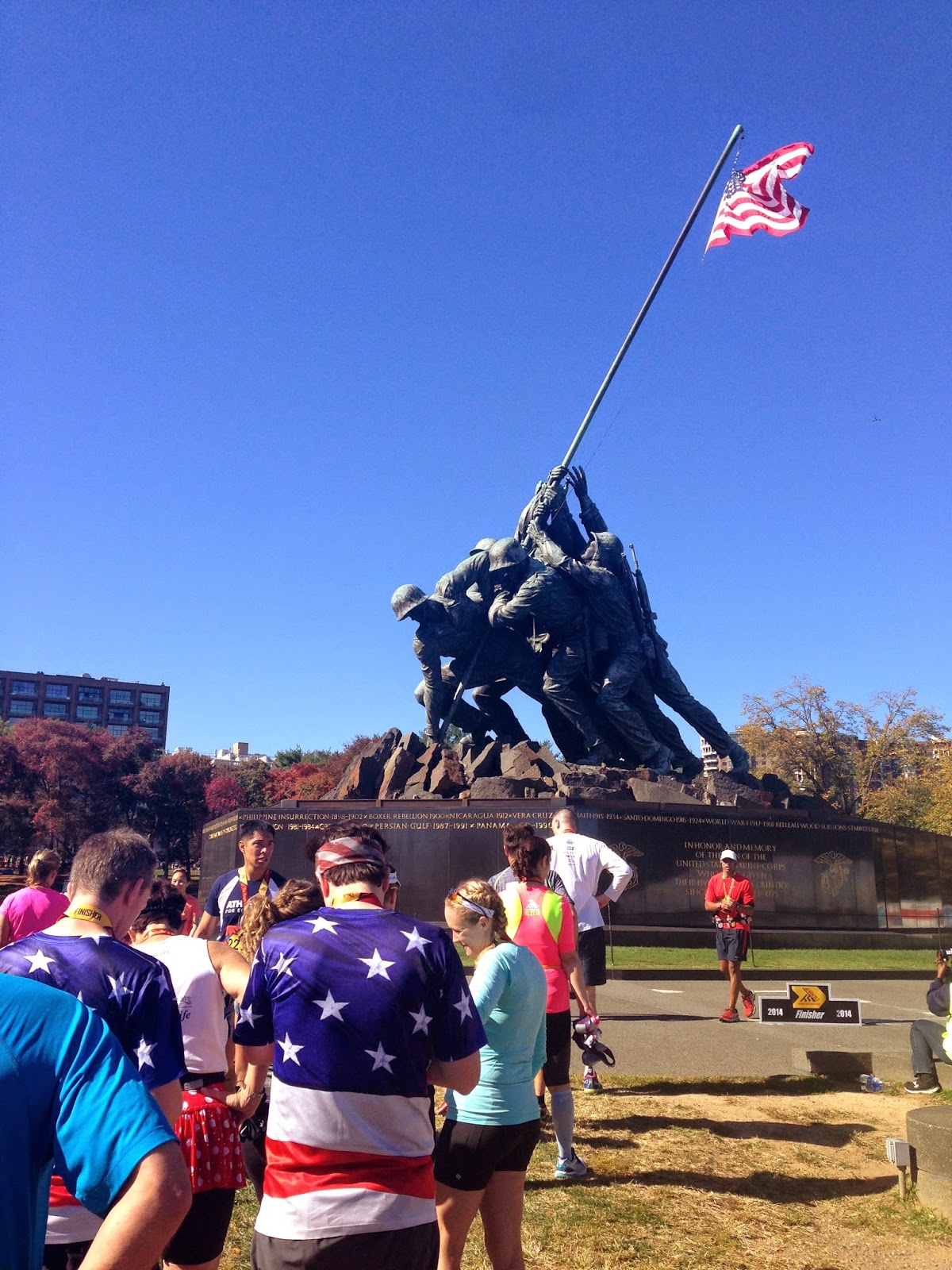 I located my boyfriend and we decided to eschew the ridiculously overrun Metro system in favor of just straight up walking back to Nicole's place to get my stuff. This may sound insane after running a marathon, but ultimately I think it was a good call. Sure, I added a couple miles to the day's total, but I also kept my muscles moving. Besides, it was such a beautiful day that the walk was lovely.

We found Nicole near the Metro where she handed me a CUPCAKE. This girl gets me. And let me just take a moment here to say how truly grateful I am to her for being the greatest race support system I could have ever asked for. She housed me, she fed me, she pumped me up, she cheered me on, she made sure I had what I needed, and then she brought me a cupcake. Honestly, what more could you possibly ask for? Basically what I'm getting at here is: GO NICOLE DU LANCRET!

So yeah. I got my stuff from Nicole's place, then my boyfriend and I took the red line Metro home, which was still a little crowded but nowhere NEAR as bad as it was near the race finish. I went home, took a shower, went to dinner, fell asleep, woke up, went back to sleep, and then got up in the morning feeling SO STIFF but basically okay. I even went to ballet that night (although I opted out of the jumping portion).

There you have it: my first marathon. I think it went okay. I didn't hurt myself, I didn't get sick, and I felt pretty okay afterward. I'm sure you're sick of hearing about it after I've spent the past few weeks obsessing, but I want to do one more post of marathon takeaways next week. After that we won't have to talk about it anymore. I mean, how could we? We won't have time. Because next up: THE WINE AND DINE HALF MARATHON!

Or in other words: "Jenn, you just ran a marathon. What are you going to do next?" "I'M GOING TO DISNEY WORLD!!!!"

(Oh, one last thing. If for some reason you want to see me finish, you can! The video didn't want to embed so click here - I show up around 3:06. Yellow v-neck shirt with a black sleeve, hair in braids. Haven't decided if I'm gonna buy any photos; they're SOOOOO expensive...)