It's time for another trip report! Yay! As I have in the past, I'll be saving our ADRs for a final food review post, but I've decided to sprinkle all the Food & Wine Festival stuff into the report itself. Okay, onward!

What does one always do the night before leaving for Walt Disney World? If you answered "Sleep poorly," you are correct! I think I achieved a grand total of four hours of sleep, but I was nevertheless up and ready to roll when my alarm went off at 5AM.

I dressed quickly, shoved the last of my stuff into my bags, and my dad drove me to the aiport. (Always be careful to select parents who live near the airport.) Dude, BWI is crowded at 5:45AM. Who knew? I skipped the first two security lines in favor of the last for my terminal, which was shorter but not as much as you might think. I barely had time to buy and consume my traditional pre-flight Jamba Juice before boarding began.

My flight took off a little later than scheduled thanks to insufficient water on board (?), but I still landed early. Immediately I entered into a flurry of text messages with Nicole, Katherine, and Erica, and after a bathroom break to change into shorts I met them at the Magical Express desk.

We piled into the bus and were excited to discover that Art of Animation was the very first stop! That never happens! Of course, when we showed up there was another bus in the unload spot and they wouldn't let us off until that bus left, but still. We had arrived!

Listen: the Finding Nemo rooms in AoA are ADORABLE. Everything from the chairs to the mirrors to the dressers are perfectly themed and SO CUTE. Even the hallways are decked out with bubble lamps and paintings I'm desperate to steal. Oh, and the hallways are INSIDE! Climate control and everything! 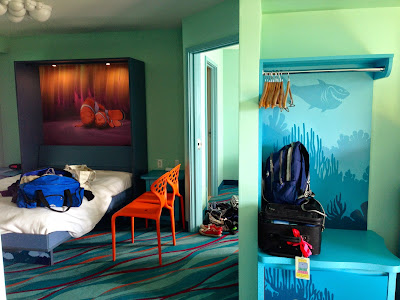 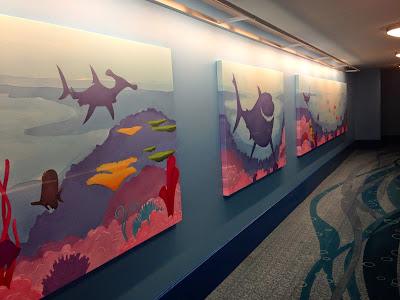 At this point we got a text from DeJanea that she was on her way, and we decided to get a snack while we waited. We headed down to the Landscape of Flavors, where I selected one of those Mickey-face chocolate ganache tarts I'd had my eye on for awhile. My verdict: tasty, but kinda one-note.

The rest of the group wandered around the gift shop; in the meantime, I was off to get my Magic Band fixed (raise your hand if you're surprised I already needed my Magic Band fixed. Nobody? Huh...). For some reason it refused to open the door of our room. I don't know exactly what was wrong with it, but whatever it was the fix required the Cast Member at concierge to reset the whole thing for me. My Disney Experience: Lackluster Since 2013.

Luckily DeJanea arrived shortly after this, and after a quick room pitstop to drop off her stuff we were off to the Wine & Dine Expo! We grabbed a perfectly timed bus and debarked at the ESPN Wide World of Sports.

I was excited to discover the my pre-printed race waiver had gotten wet in my bag (suspect: lens solution) and I needed to get a new one. Turns out Nicole did too, so we stopped at the computer/printer area set up for this purpose at the beginning of the race check-in area. There was no line; we knocked that out quickly and caught up with the rest of the group. 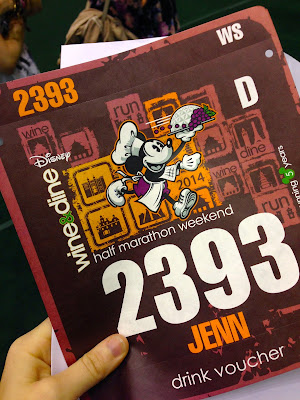 Katherine, Erica, DeJanea and I checked out the mini-race merchandise store that was set up in the check-in area, but it was pretty sparse. We headed out, stopping at the ticket will call area so that Erica and DeJanea could pick up their tickets for the after party.

From there it was time for the main expo area, where we picked up our shirts and immediately made a beeline for the large official merchandise tent. There was no line, which surprised me - and also very little merchandise, which did kind of surprise me when I considered that the expo had only been open for a few hours. Katherine and I examined a pretty cute tank top we probably would've purchased if only the remaining shirts weren't exclusively large and extra-large. Oh well, Disney. I guess occasionally you do save me money! 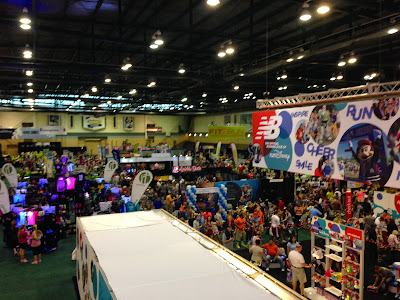 We made a quick jaunt around the expo, but nothing much of interest was about - there wasn't even the change for extensive sampling a la the Marine Corps Marathon Expo. We quickly decided that our time would be much better spent in the parks, so we caught a bus to the Boardwalk and used the International Gateway entrance to Epcot (!!!!).

GUYS GUYS GUYS GUYS GUYS IT WAS MY FIRST FOOD AND WINE FESTIVAL! And it was so much FUN! First stop: the France kiosk, where Katherine and I shared an escargot tart. This was deliciously garlicky, but I really only tasted the garlic; where is the snail flavor? 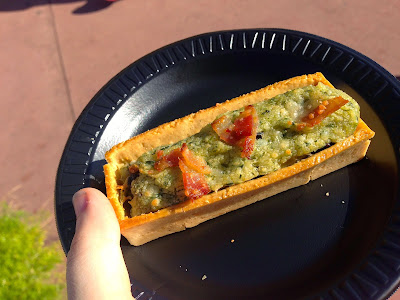 We back tracked in the opposite direction because I was reliably informed that Greece was back toward the bridge to Future World. I got my much-anticipated griddled Greek cheese with pistachios and honey and it was... fine. It was fine. No, I mean, don't get me wrong - it was tasty. But it had clearly been hanging out under a heat lamp for awhile and the cheese had congealed a bit. The flavors were good but it just wasn't gooey enough, you know?


Katherine and I, being grand champion sharers, next split an Aulani Sunset cocktail (delicious!) and a tuna poke. I LOVE raw tuna, but this batch wasn't quite up to snuff for me. The seaweed salad underneath was unexpectedly good, however, with a peppery backbite. 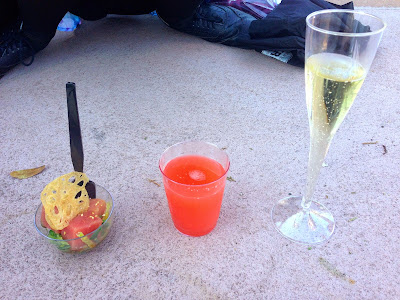 Next I was excited to sample the smoked salmon and potato pancake from Scotland, which was tasty because smoked salmon is tasty, but I found the potato a little bland. 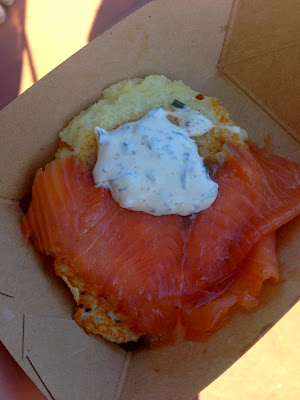 By this point everyone in the group had acquired treats, so we hunkered down on the ground by one of the generic gift shops and passed things around for tastes. Nicole came by with watermelon juice and a vegan cupcake from Terra, which she basically gave to me because she is a) awesome and b) didn't much care for either. I thought the watermelon juice was really good but the cupcake was too weirdly dense to be mistaken for a non-vegan dessert.

We took a food break to ride Mission: Space (well, all but Nicole, who does not do More Intense Orange Team). Speaking of More Intense Orange Team, we all got a kick out of the number of times they basically said "Are you sure you want to ride this ride? Maybe you don't want to ride this ride." I was allowed to be the pilot as per usual, because in my heart I am Tom Paris.


That was quite enough time spent not eating delicious foodstuffs, so we hightailed it back to the World Showcase for more edible excitement. We tried to stop in Mexico for a Gran Fiesta Tour, but it had a line. A LINE. FastPass+, you continue to wound me. QUIT MAKING LINES APPEAR WHERE THEY NEVER DID BEFORE.

After such a disappointment, there was nothing to do but sample more foreign delicacies. My next item was the kimchi dog and an iCing sparkling grapefruit rice brew from the South Korea booth. The kimchi dog wasn't spicy enough for my liking but the "rice brew" (which tasted like sparkling sake; I don't know what the difference is) was pretty good and grapefruit-y. 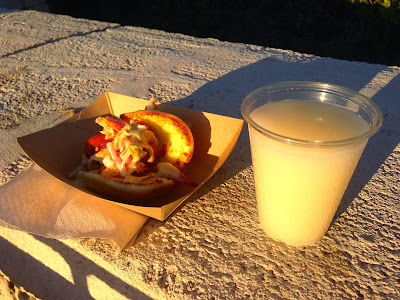 Finding ourselves in Japan, we stopped in at Mitsukoshi and promptly proceeded to lose and find each other repeatedly as is traditional. I bought a cosmetics bag for my mom because Shinzi Katoh keeps making perfect things for her and some incense for my boyfriend, found Nicole, lost Nicole, found Katherine, and then we walked blinking into the night until we ran into the rest of the group at the Food & Wine Festival booth for Japan. I got myself a spicy handroll, which was basically just a spicy tuna roll but good if you like the textures of sushi (which I do). 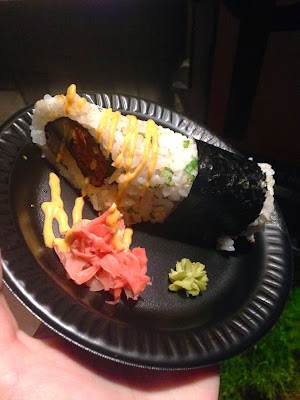 Somewhere in there we also stopped in Sommerfest in Germany for snacks and my first grapefruit beer. This was awesome and I would 100% get it again, but if you don't like sweet beer it's probably not for you.

My last stop was at the Champagne and Desserts booth, where I bought a trio of stuff I wasn't that into for the one thing I was: the opera cake. It was good and chocolately, but the cheesecake roll and creamsicle thing that came with it were only okay. 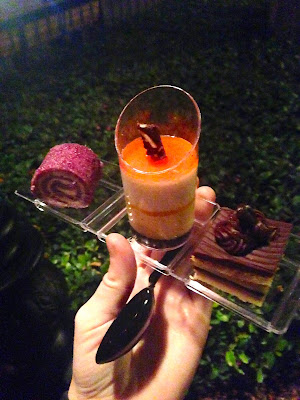 By that point we were all, shockingly enough, SUPER tired, so we headed back to the hotel where I was thrilled to discover my luggage had indeed been Magically Expressed to the room. It was somewhere in here that Estelle arrived; she immediately turned around and headed to Epcot to get some food of her own and see that fireworks because she's a smart girl who knows what's up.

Meanwhile, Nicole had headed out for a snack, and upon her return SHE BROUGHT ME A CUPCAKE. An ELVIS cupcake from Everything Pop! Verdict: peanut butter frosting awesome, rest of it just okay. 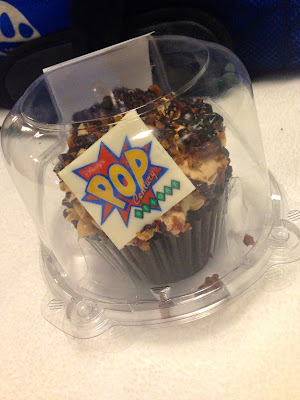 I kinda wanted to see IllumiNations myself, but I was so darned tired and I've seen it so many times that I ultimately deferred. I instead showered, wrote down notes for this report, engaged in some socialization, and passed out at what at Disney could be considered a very early hour. Got get your sleep before HALF MARATHON DAY, no?