Considering how late I was up the night before, I slept surprisingly poorly. By 10:30AM I threw in the nocturnal towel and got out of bed. I was a little distressed to find my phone hadn't charged, as it had experienced some minor water damage thanks to the hours-long shower of the Wine & Dine Half. I plugged it into the wall and to my relief it juiced just fine. That and the subtle but weird screen discoloration had evaporated entirely by the end of the day. Hooray for no rainy consequences!

With the exception of Nicole, who had apparently departed for Epcot hours ago, we were slow to get going. People wandered about showering, getting food and coffee, etc. Under normal circumstances I am up and at 'em at WDW, but exceptions must be made on occasion. I ate the rest of the snacks from the race box, which was kind of lackluster. What happened to the full Luna bar and piece of chocolate from previous boxes? Boo.

By noon we had made it to the Magic Kingdom, where much picture-taking and merrymaking was experienced. Our first stop was the Christmas shop in Liberty Square, where Estelle purchased some truly adorable red and green sequined Minnie ears. I played around with some Christmas hats but abstained from making a purchase... SO FAR. 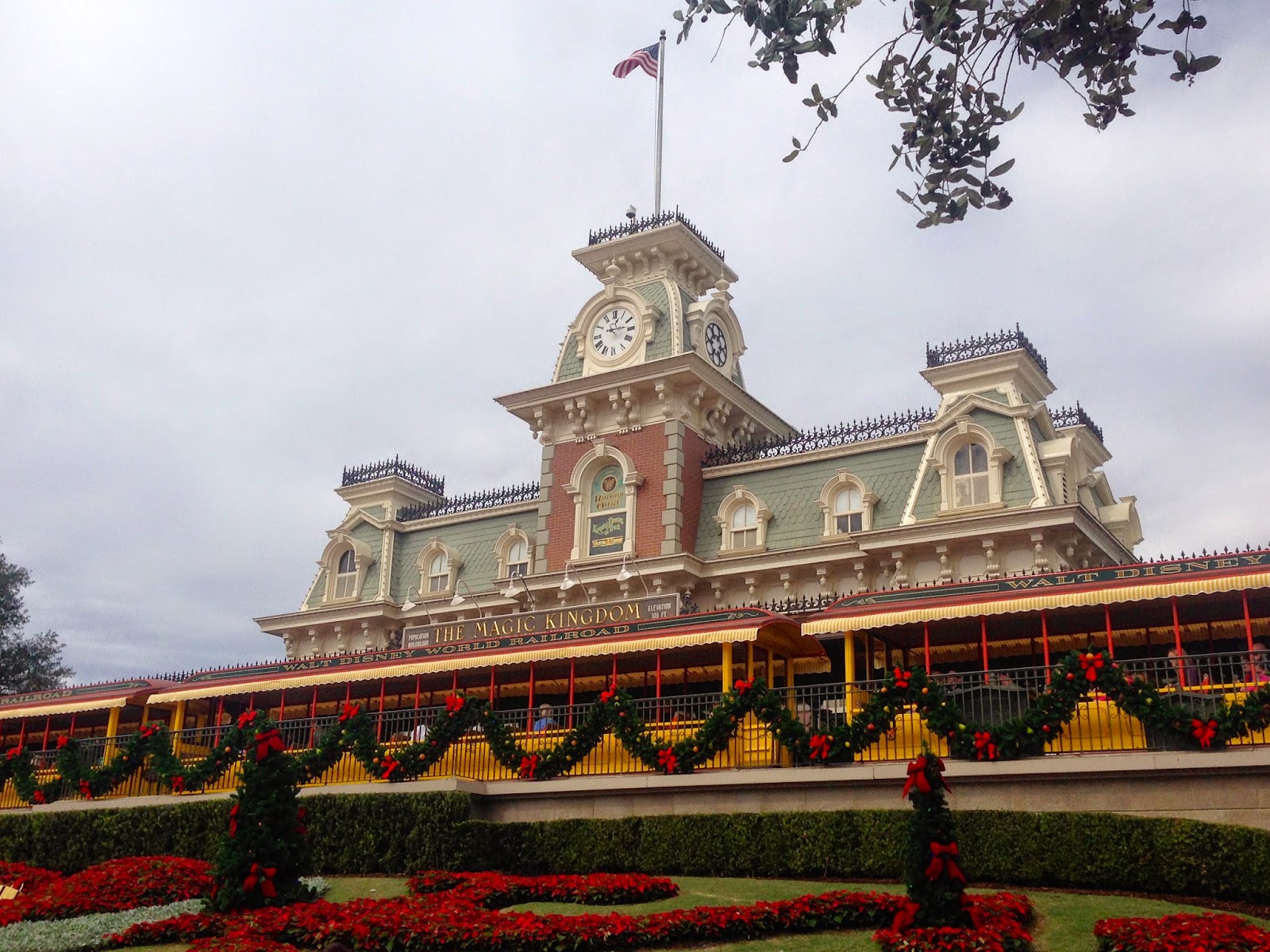 Estelle made us some FastPass reservations, but we got mixed up and accidentally went to Big Thunder Mountain first. Whoops! Maybe I would've checked beforehand if the My Disney Experience app would deign to work on my phone. But no matter. We turned tail and took on Space Mountain, which I was able to ride without any unladylike incidents because I was wearing jeans. (But seriously, getting out of those cars is NOT graceful work.) 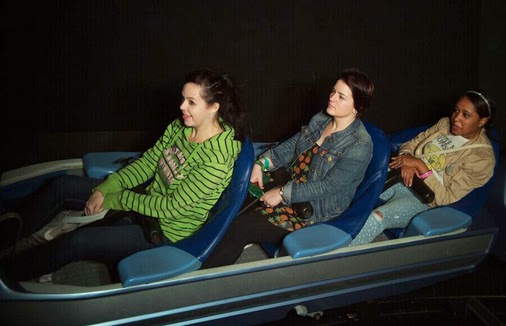 Here we split off for snack time, with Estelle traveling to Adventureland to snag a Dole Whip that would match the pineapples on her dress. Meanwhile, I led everyone else on a vital field trip to the Cheshire Cafe to purchase a food item I had been dying to eat for over a year. Ladies and gentlemen, I give you... THE CAKE CUP. 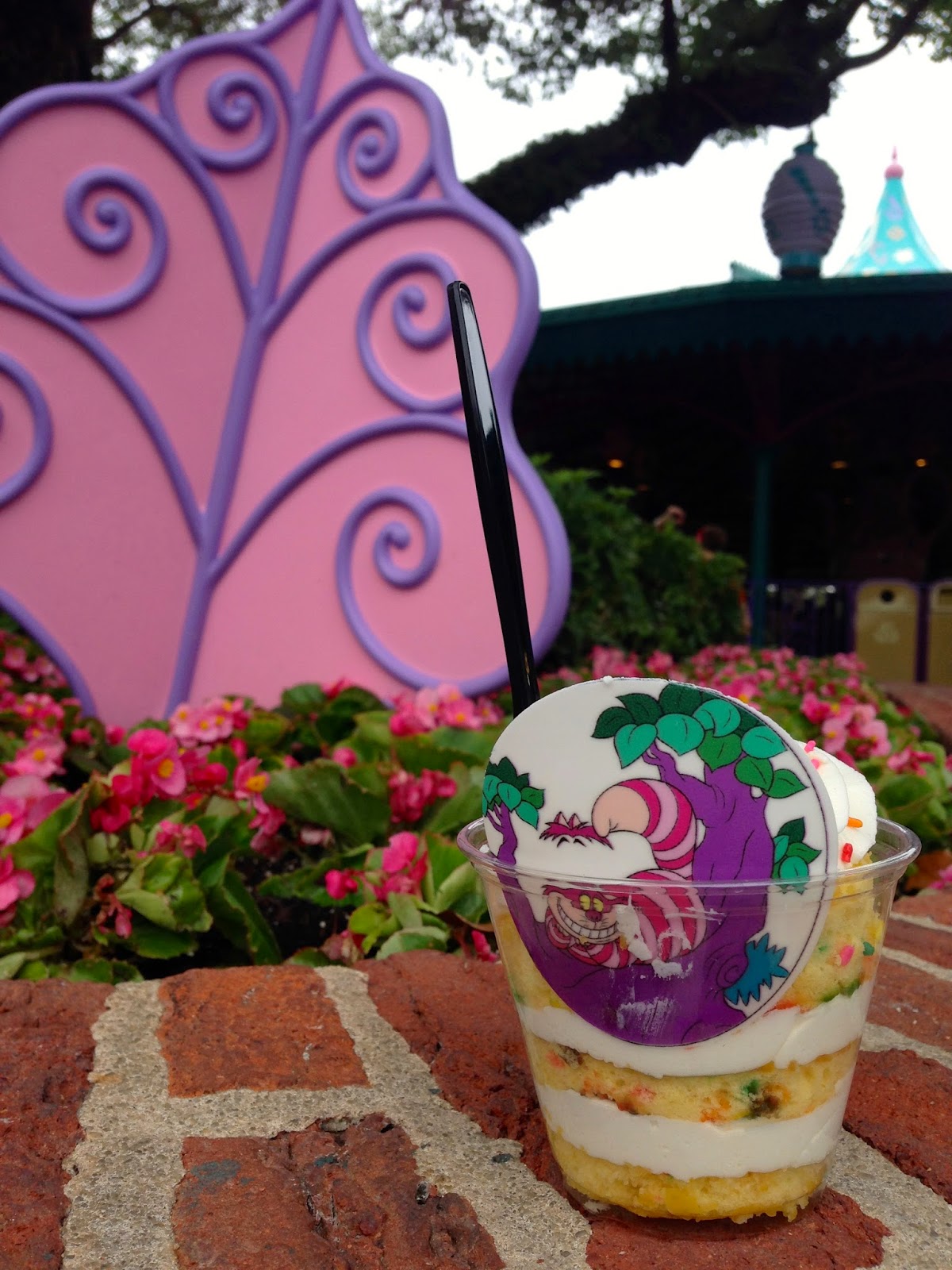 The cake cup is not pretentious. It is not fancy. It is, at its core, a box funfetti cake with sugary store-bought vanilla icing someone shoved into a cup and put a price markup on. But there is just SO MUCH FROSTING and I have SO MUCH LOVE FOR FROSTING that I couldn't resist. Indeed, Official Food Sharing Partner Katherine and I tag teamed this sucker - I scraped off the icing and she tackled the cake. It was great and glorious and I would do it again in a heartbeat. Note: the Cheshire Cat is edible but tastes like nothing.

From here we headed into Storybook Circus to poke around. Dumbo had a long-ish wait so we headed into the gift shop to see what we could see. There wasn't as much unique merchandise here as I would've liked considering the wealth of cute stuff that could be done with the circus motif, but the decor was suitably adorable. DeJanea even got her first set of mouse ears, embroidered with her name. (Can you believe I still don't have any?)

As we exited the shop, Katherine noticed that the line for the Minnie and Daisy character meet and greet was at a mere ten minutes, so we hopped in the queue. We split up out group so as to not overwhelm the photographer with a billion cell phone photos and whatnot. Daisy was deeply jealous of Katherine's tattoo and mimed that she wanted one too. I think Disney should definitely roll out some tattooed characters.

Side note: while between Daisy and Minnie photo ops, a suspicious event occurred. A wheelchair group came in the side entrance to see Daisy, but they instead ignored the cast member's instructions and hijacked Minnie - and interestingly enough, no one was using the wheelchair. Look, I know that disability and injury aren't always obvious to the naked eye. Maybe I'm being overly cynical. Maybe I'm being a jerk. I don't know. We didn't make a fuss or anything. But I think duplicitous wheelchair use is disrespectful to those with legitimate need, and Disney needs to continue working on their ADA policies. 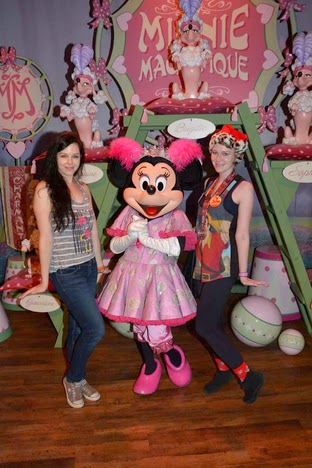 Post characters, we met back up with Estelle for our actual Big Thunder Mountain Railroad FastPass, then headed back to Main Street to browse some shops. 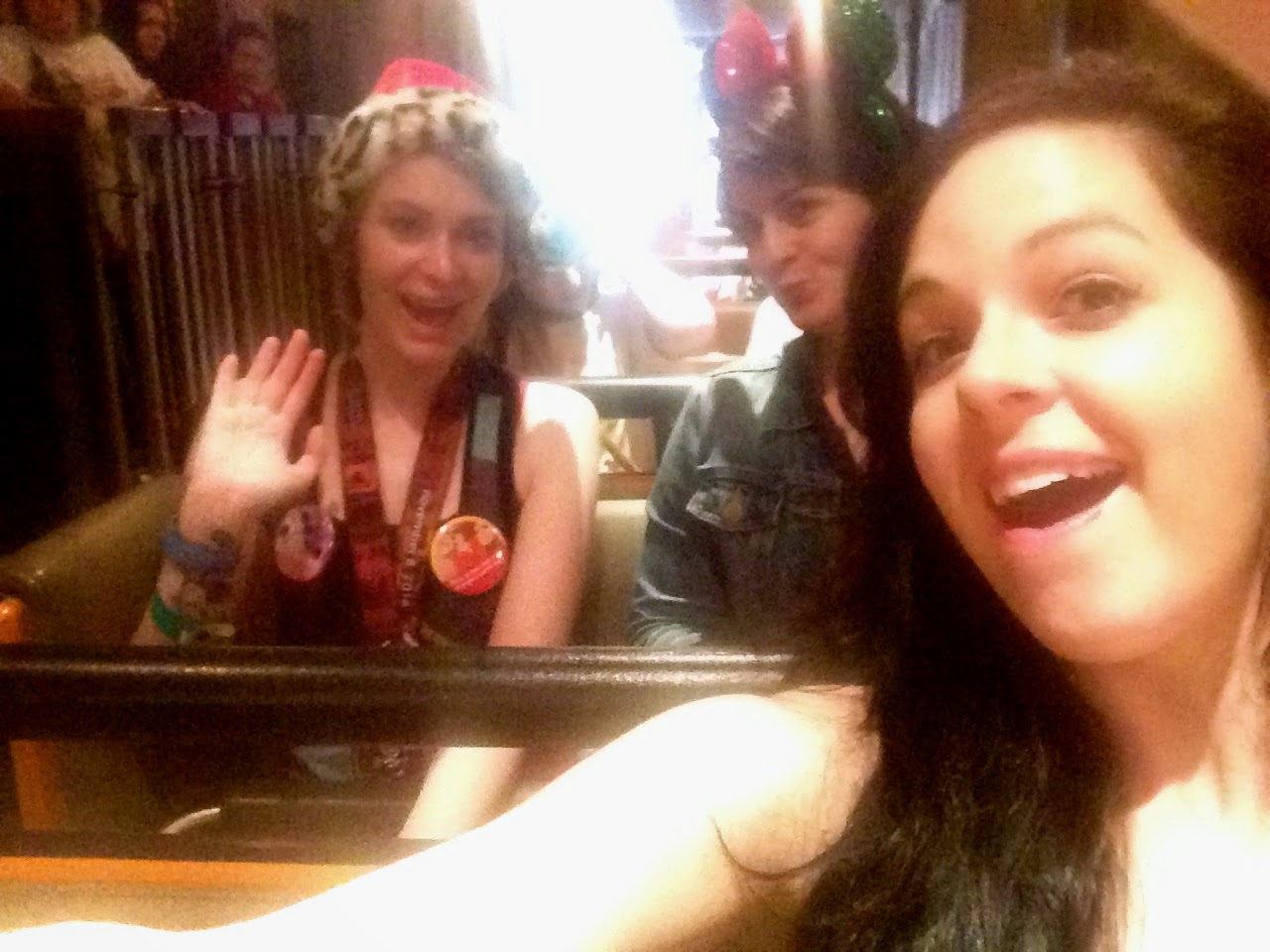 While there, we received a tragic text message from Nicole that she had lost track of time and wouldn't be able to make our early dinner ADR at 'Ohana. Sadness!

But it was getting to be about that time, so we picked up the monorail to the Polynesian and grabbed a buzzer at the 'Ohana podium. It vibrated with unexpected quickness, and we were seated in no time flat. Our first act? An order of Lapu Lapus all around! According to our server, our tray full of pineapples made us the talk of the restaurant. More on this meal in a later post. 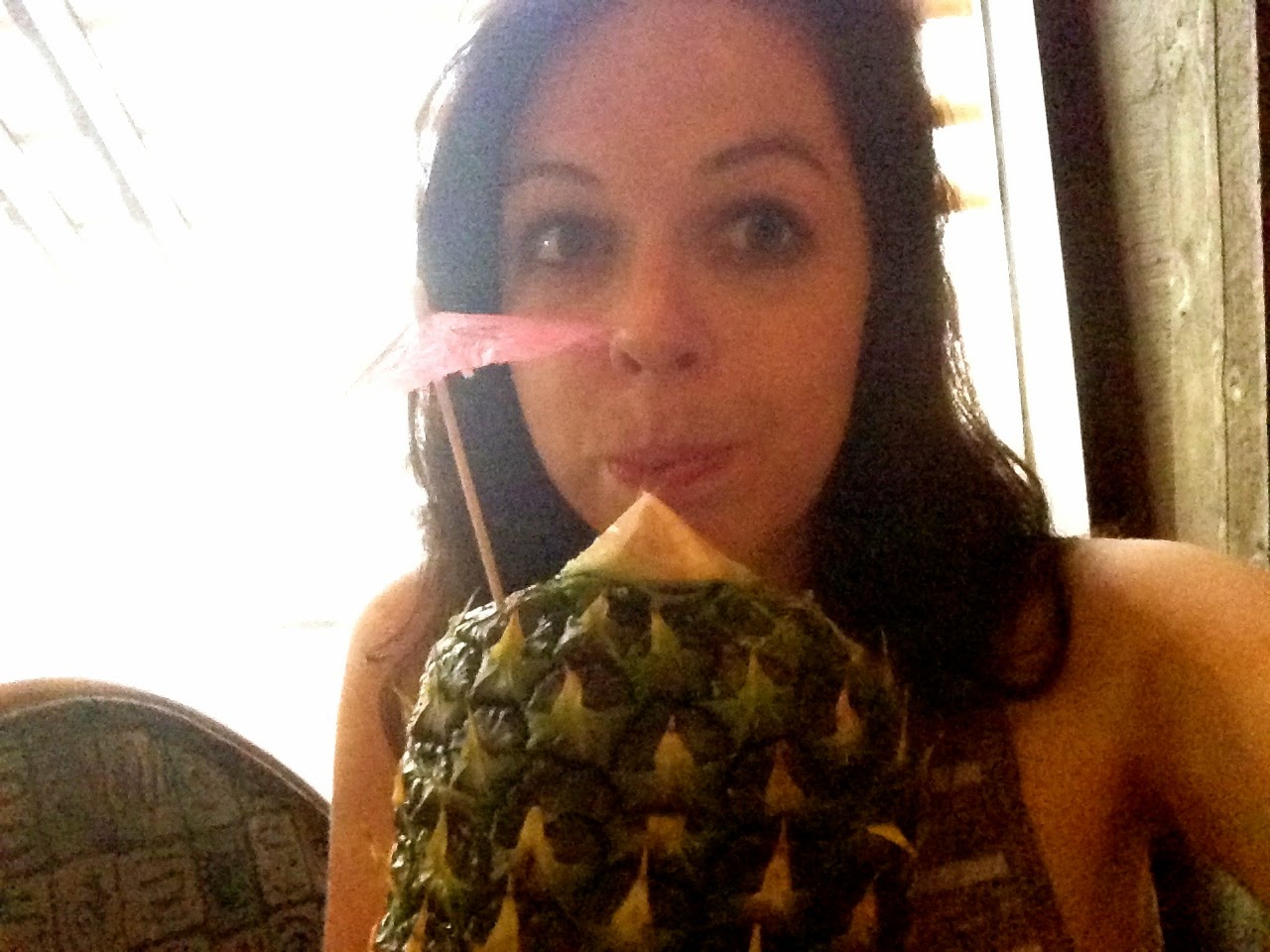 After dinner, most of our group went back to the Magic Kingdom. But Estelle wanted to go to the Grand Floridian to see the resident orchestra perform, and as I am not one to send a good soldier off into the night alone I went with her.

The orchestra was excellent and it was fun watching families dance to the music, but what I really liked was the pianist in the lobby who picked up after they finished their set. A little boy stared transfixed at the keys as the man played and the two ultimately struck up a conversation. We later spotted them plus the boy's mom continuing their talk on one of the couches. I like to pretend that this little boy was inspired to become a pianist and will one day remember that moment as the second he knew his ambition. Disney magic! 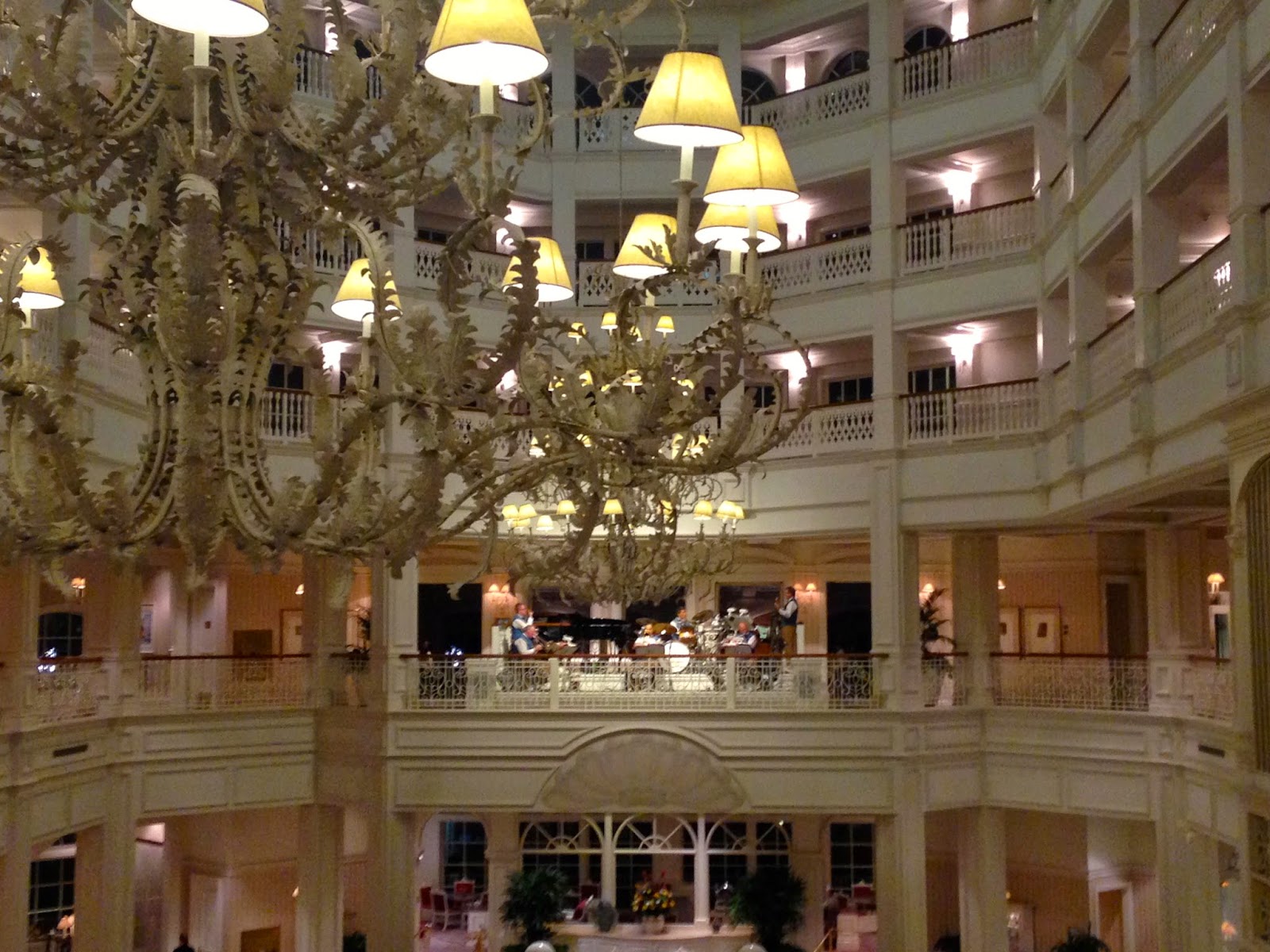 Hearts thusly warmed, we picked up the resort monorail to the Magic Kingdom and headed straight for the super-cute tree stump charging stations by the Tangled bathrooms (shout out for Estelle's favorite background music!). We located a lone unused charging slot among the available, so Estelle got a head start on battery power while I ran off to buy my boyfriend this plate from the new Haunted Mansion gift shop, Memento Mori. I was so excited because he's an architect and loves the Haunted Mansion and it's like they designed it just for him!

Upon my return another charging station had become available; we transferred our phones to it and just hung out for awhile. The Tangled area really is quite charming.

We couldn't wait for a full charge, though, because it was time for the Main Street Electrical Parade! I'm not normally a big parade person but I just LOVE Disney's night parades - MSEP is awesome but if they ever decide to bring back Spectromagic I won't mind that either.

Chalk this up to another thing FP+ has made irritating - parade viewing is now a thing you FastPass if you want a good spot. Sheesh. We ended up with an okay position in Frontierland, but I've always had good luck finding a spot by the hub and FP+ prevented that. The parade itself, however, was fantastic as per usual - gotta love the Alice floats! 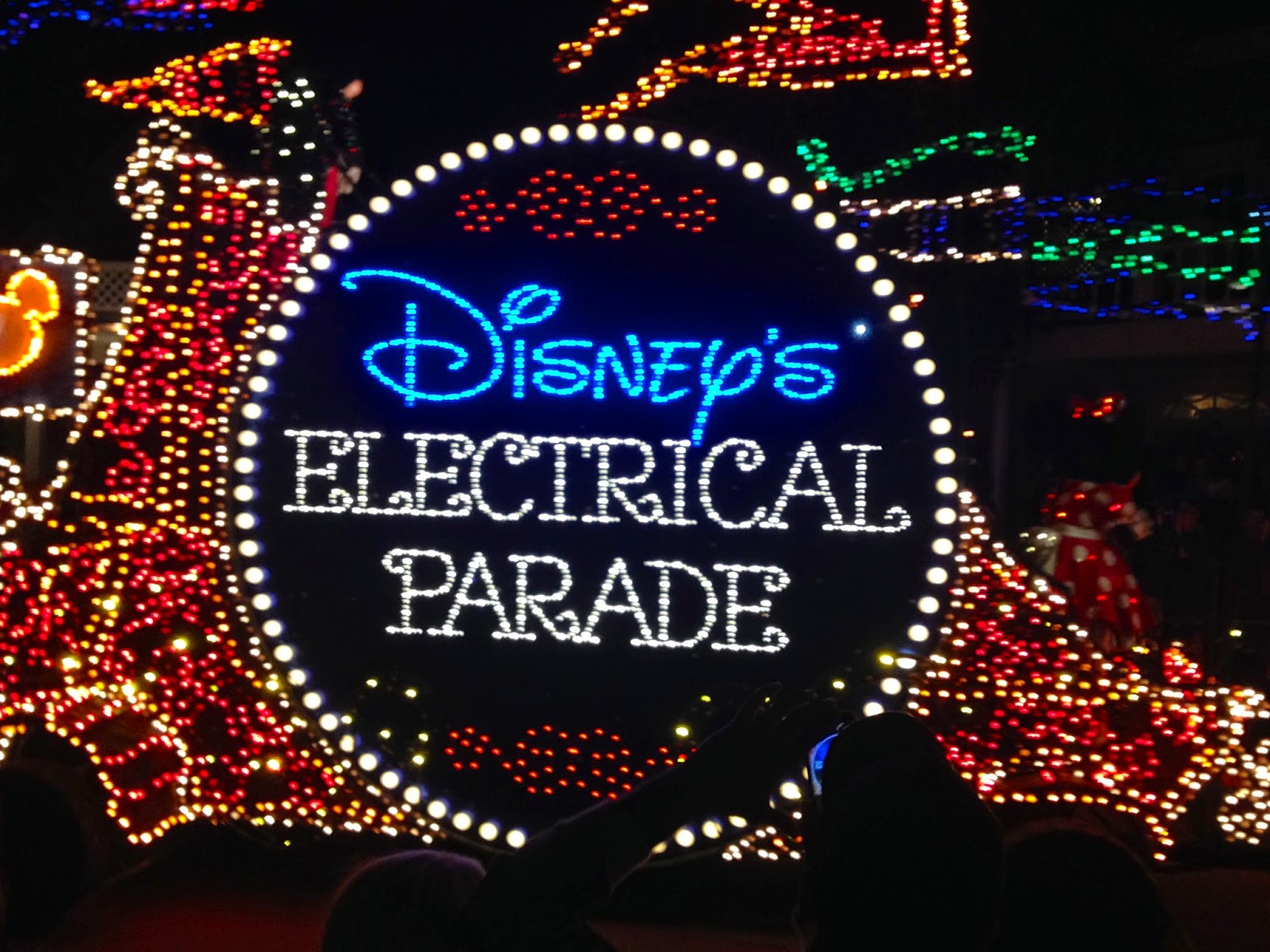 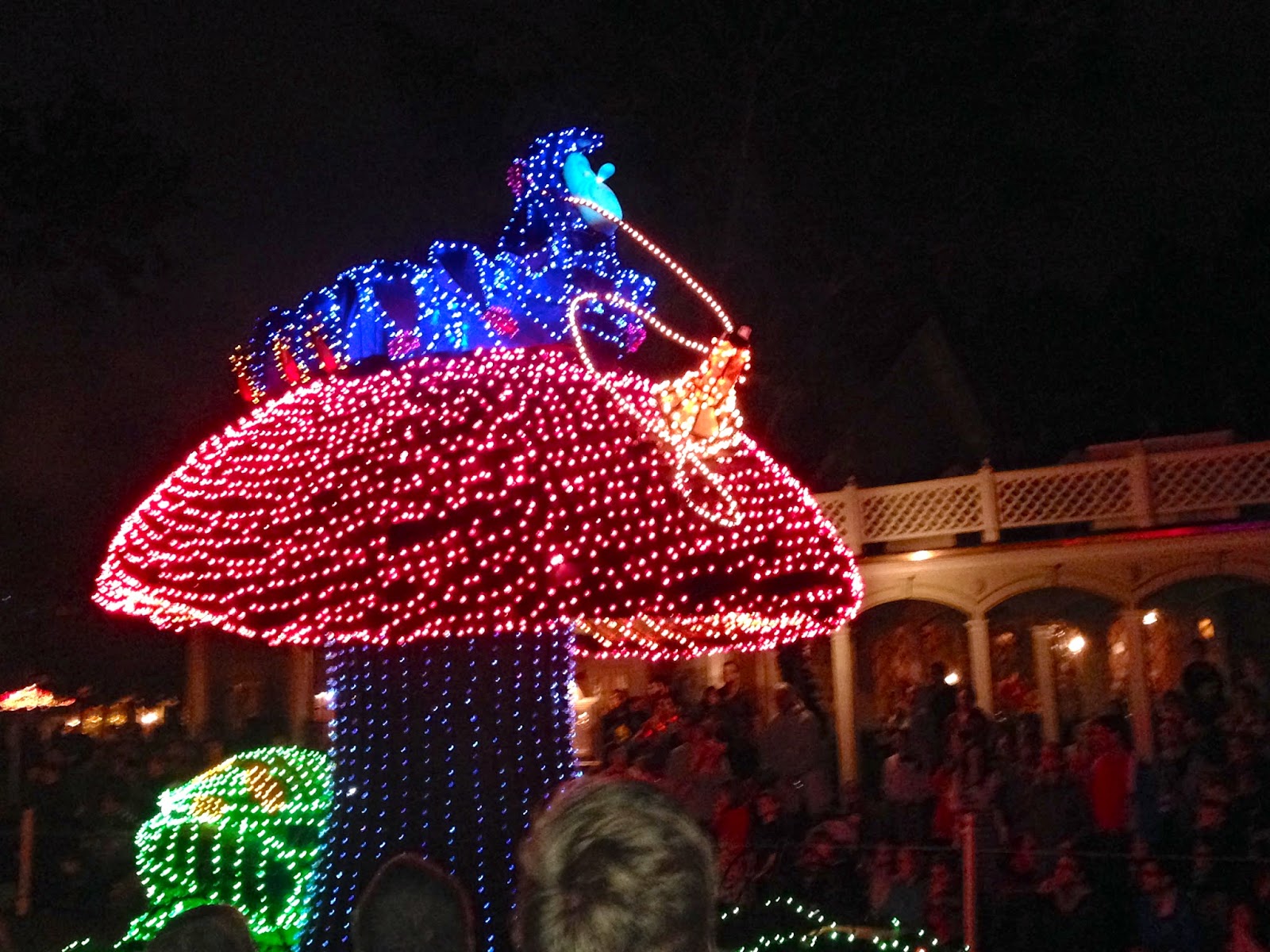 Ditto on the fireworks. I kinda can't wait until the hub expansion. I'll miss the rose garden but boy do we need the room. Estelle and I ended up shuffled over to a backstage area just past the ice cream parlor, where the view was actually pretty food but it was kind of hard to hear the soundtrack. Oh well - like I don't know the music by heart anyway! 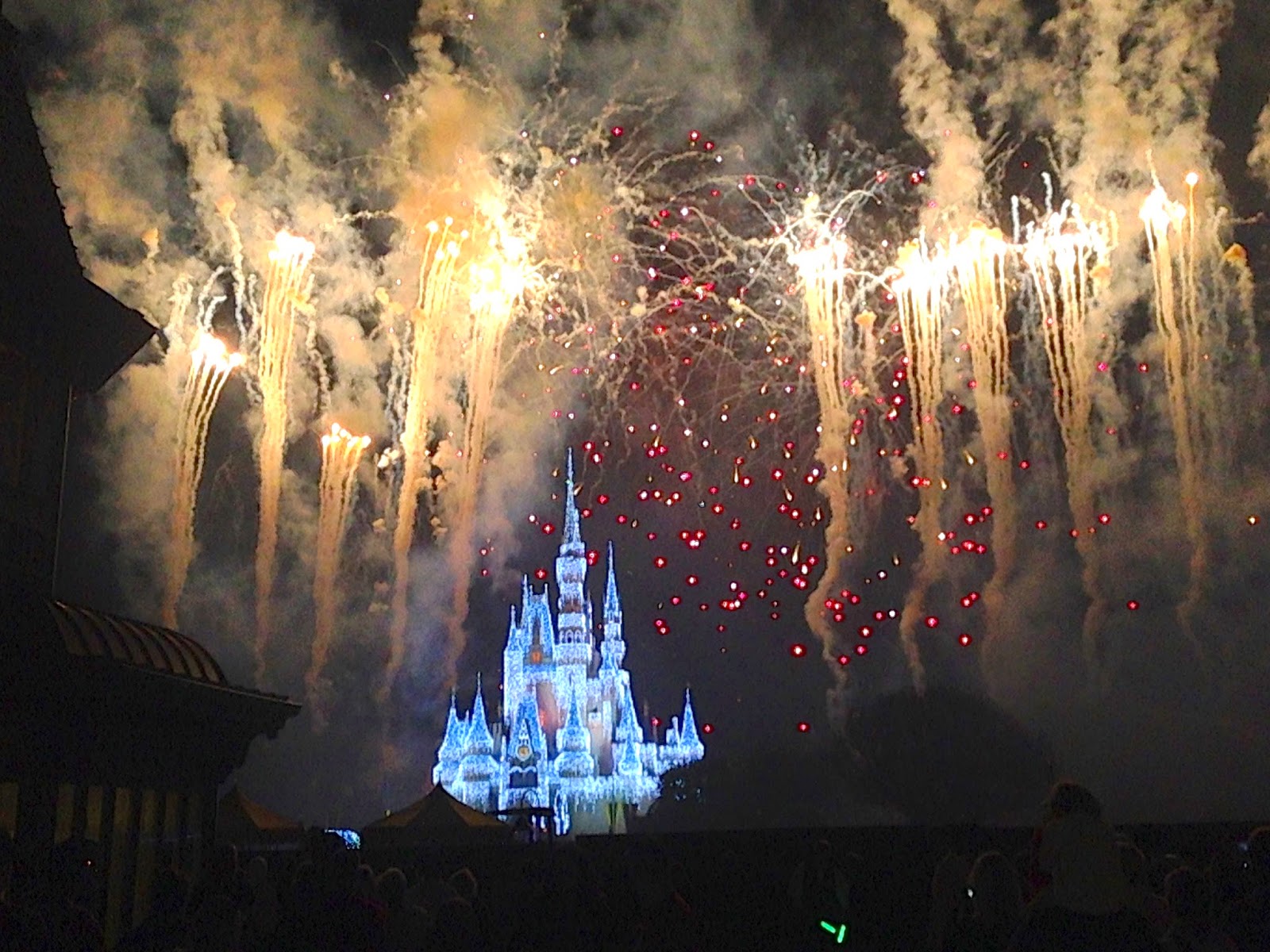 After the fireworks we skedaddled over to the Seven Dwarfs Mine Train for my first ever ride! The line was reportedly about forty minutes, which wasn't bad considering, so we hopped in. Estelle made friends with a mom and her little girl who was absolutely mesmerized by the jewel sorting and water mini-games in the queue - she kept having to go back and retrieve her.

We were very nearly there when the unthinkable happened: the ride broke down! Our consolation prize: a FastPass good until November 30 for any ride. We resolved to come back later in our trip to get our Mine Train ride in at last.

The park was close to closing, but we had time to sneak in a ride on Peter Pan, which featured - get ready - NO WAIT. No wait for Peter Pan! Now that's just crazy talk, but it's the truth.

We came off the ride after closing and were met with a confusing sight at the hub: the Main Street Electrical Parade was running again. Huh? When does MSEP ever run after park closing? That's IllumiNations' thing. But there it was. So we watched the parade again (at the hub with a great view, might I add) because duh. But it was a weird version - the canopy over Cinderella's dancers was missing, and the dwarfs that had cavorted with Snow White only hours earlier were nowhere to be found. Maybe MSEP was surprised to find itself running again too.

The park was, as I mentioned, now closed, but we weren't quite done yet. Happily for us, the Main Street Bakery was still serving; after grabbing a coffee for Estelle and a mint tea for me, we settled on a bench by the castle and I finally saw it: the Kiss Goodnight. Which I still think should feature Jiminy Cricket. It just feels right. 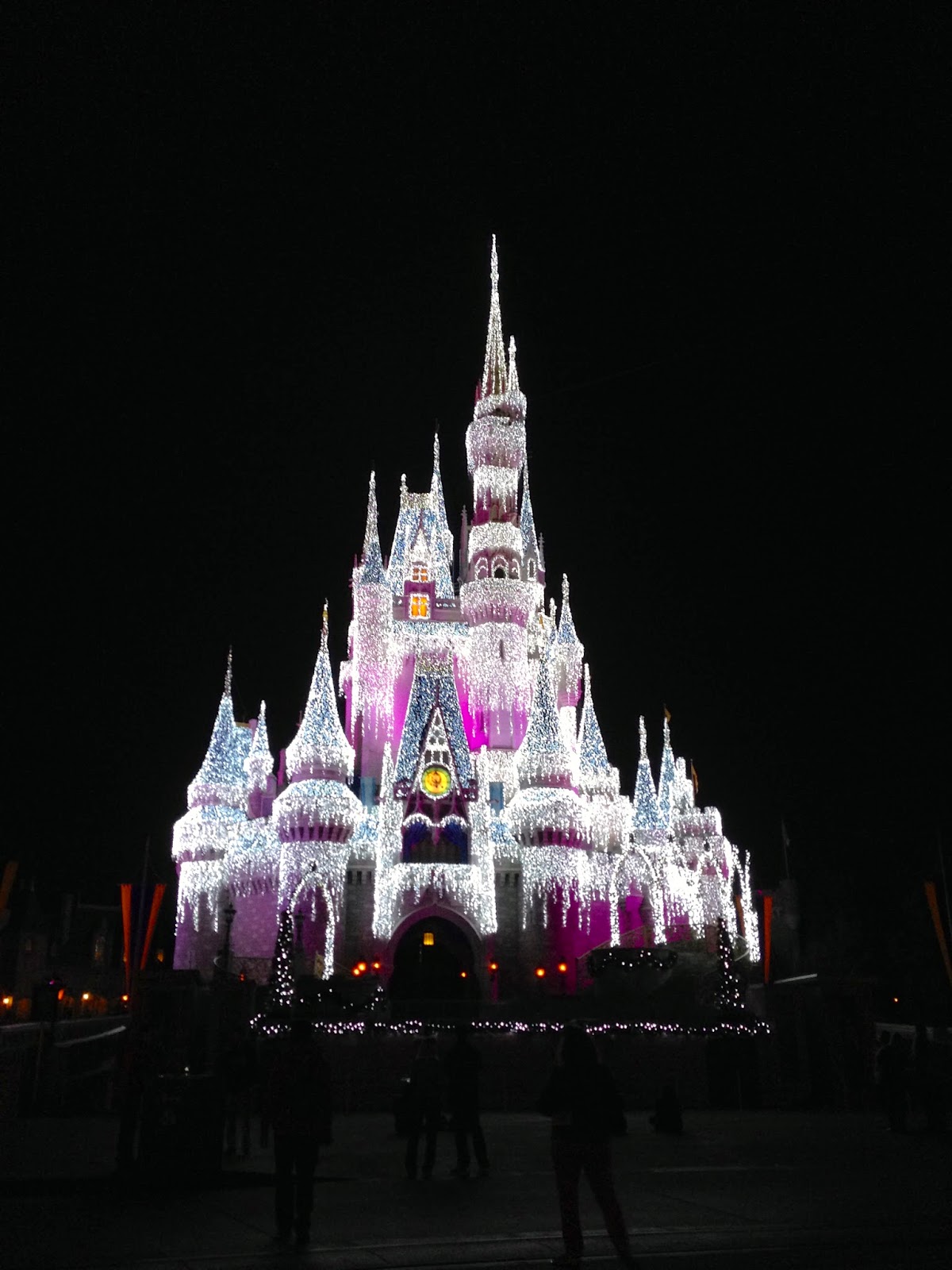 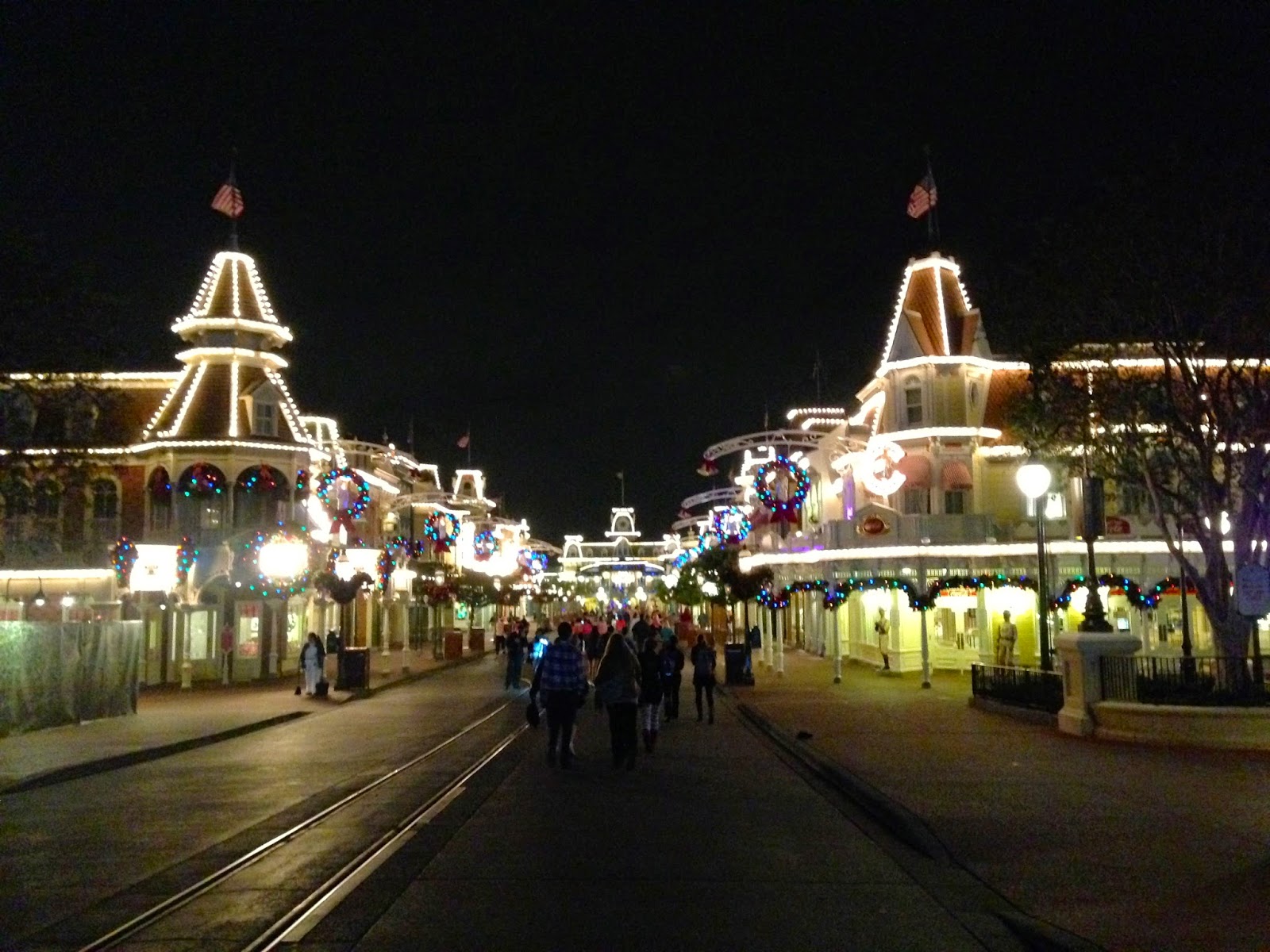 Then and only then was it time to catch the bus back to the resort and go to bed. In the morning: the Studios!