Our last full day at Walt Disney World was a Studios day, and as Estelle and I were the first people ready in the morning, we took off for the park... OR SO WE THOUGHT.


Oh, WDW transportation. Always an adventure with you!

Our first thought upon arrival was breakfast, so we got in line at Starring Rolls. Estelle found a danish that would do nicely, but what I really wanted was a breakfast sandwich, something Starring Rolls mysteriously lacked. I knew from reading Eating WDW that Fairfax Fare has an egg sandwich, so I cruelly abandoned Estelle in line and ran over there.

But not fast enough. I slid into the stanchions with the Fairfax Fare breakfast menu still in view. But as I came to the front of the line, a guy switched out all the menus for the lunch specialty hot dog offerings. I checked my watch - 10:31AM. Breakfast ended at 10:30AM but surely they weren't hard and fast on that rule, were they?

They were. I asked for an egg sandwich and was cruelly denied. Maybe I could've argued my way into it, but instead I beat a retreat to the Sunset Ranch Market produce stand and sulked my way through a bag of Craisins trail mix and a bottle of water. Seriously, Disney, won't you spare a thought for brinner?

Estelle met me at the tables in the back but was still working through her coffee and danish; she sent me on ahead and I jumped into the Rock 'n Roller Coaster single rider line. It took about 40 minutes to make it into my super-stretch limo, but considering the standby line read 90 minutes I counted myself lucky.

Post "Sweet Emotion" I located Nicole and Erica, who were meandering about Sunset Boulevard while Katherine and DeJanea went through the Tower of Terror standby line (YES KATHERINE I WILL RIDE THIS WITH YOU IN JANUARY BUT I WANT THAT ICE CREAM). The latter still had awhile to wait, so the former and I met up with Estelle in the Muppets courtyard and took in MuppetVision 3D before heading to lunch.* 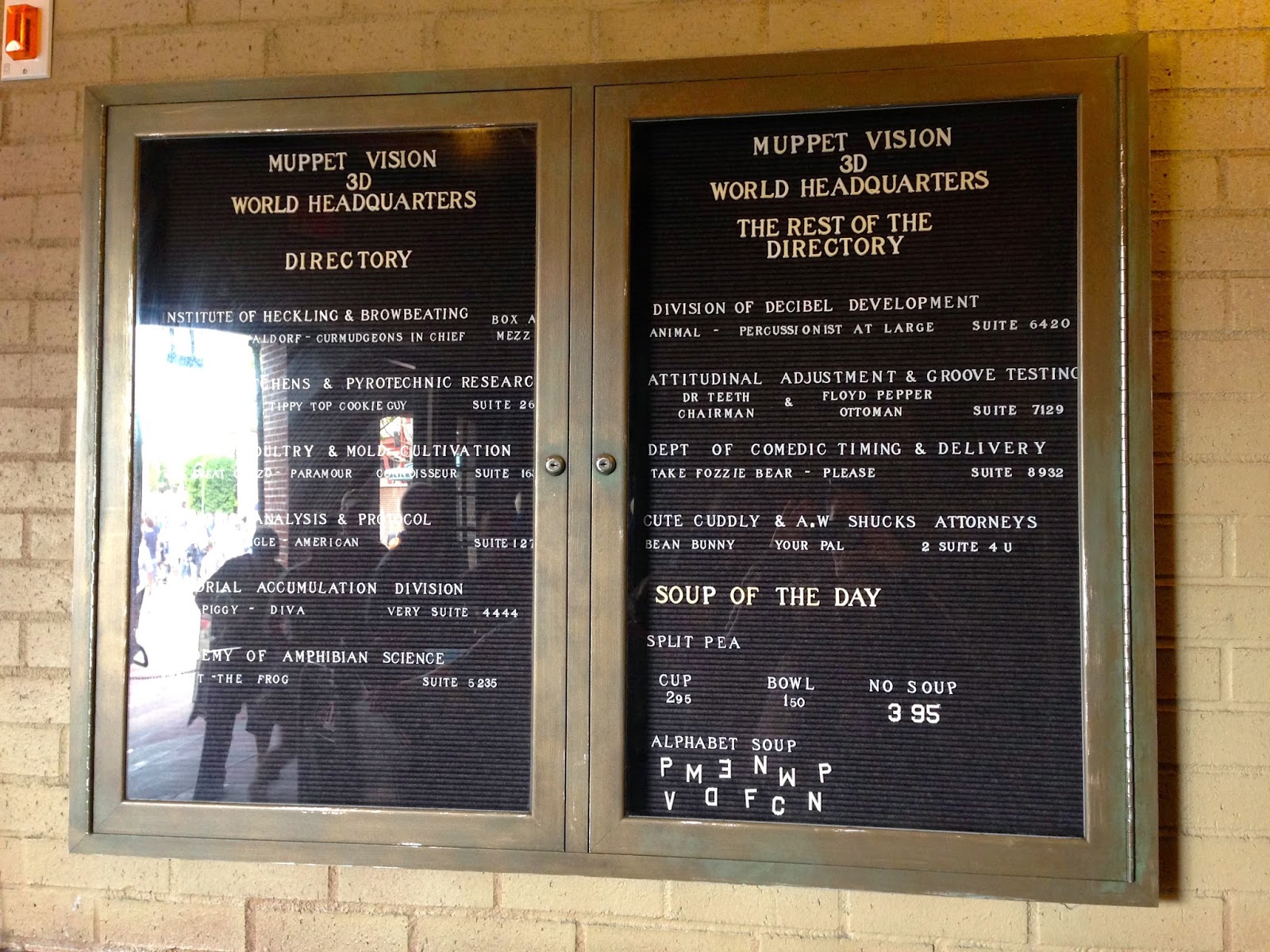 DeJanea and Katherine escaped the Tower of Terror with their lives, and we met them at the Sci-Fi Dine-In for our lunch ADR. More on this in a later post!

Somewhere in there we also visited Wandering Oaken's, where long lines of children waiting to play in the snowground. To them I say: silly children. Drive north a few hours and see what winter is like for REAL.

After lunch we formed splinter groups, with Estelle headed off to the Yacht Club; Katherine, Nicole, and I bound for Epcot; and DeJanea and Erica staying the Studios. On our way out, Katherine, Nicole, and I randomly passed the Great Movie Ride and jumped in the (long, actual existing, since when is there an outdoor portion of the queue, what the heck?) line. Coincidentally enough, we encountered DeJanea and Erica in that very line, and we were able to enjoy a thorough hijacking by Mugsi in the world of movies.

Then it was time for Epcot really. Katherine, Nicole, and I picked up a Friendship boat that was just docking, with Nicole debarking at the Boardwalk while Katherine and I continued on to the Yacht Club. We made a brief pit stop in the Yacht Club lobby to see the sights and smell the smells before walking to the International Gateway for the final day of the Food & Wine Festival. 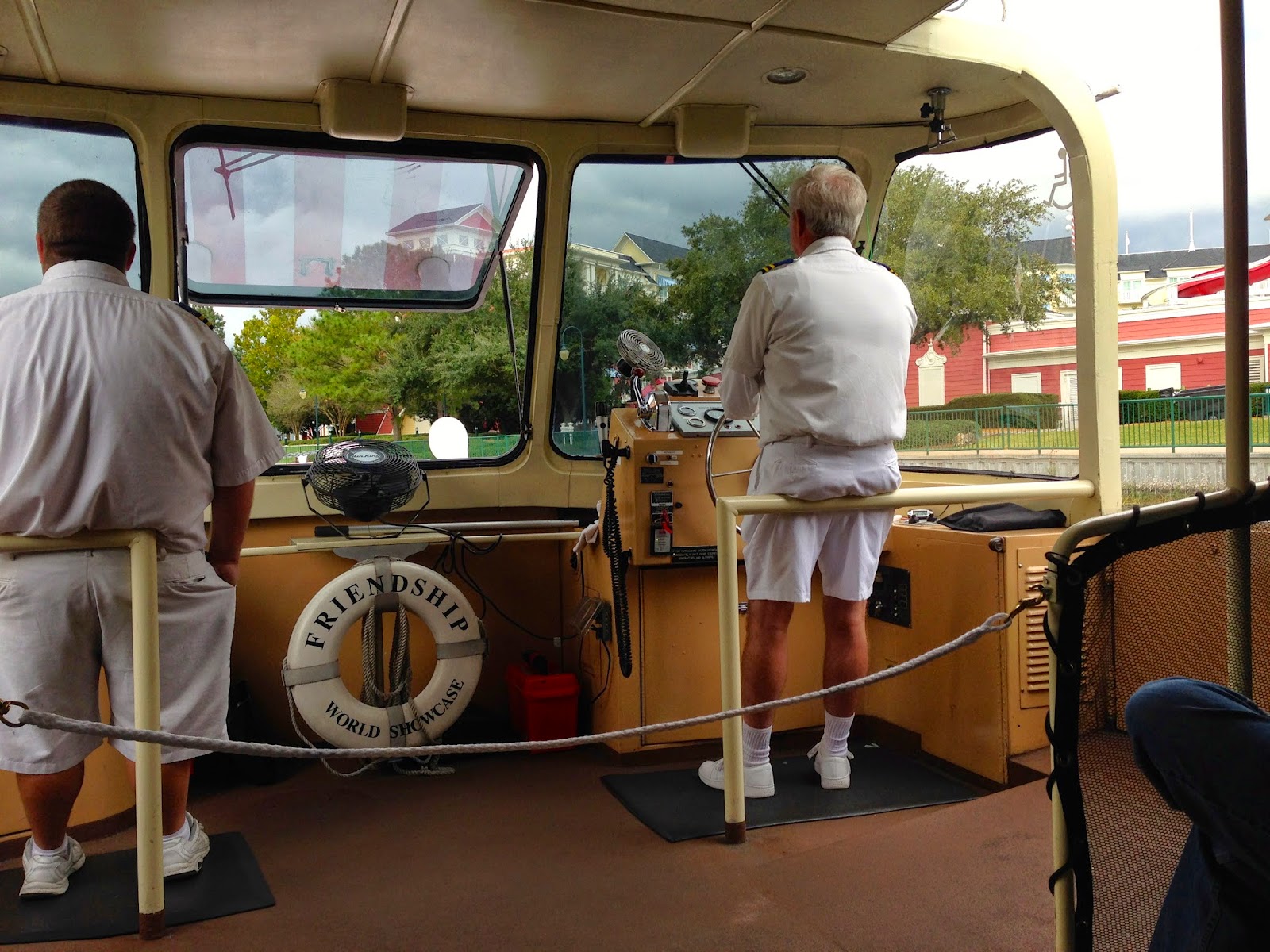 Our first stop was the Scotland booth which was offering 12-year-old Glenfiddich scotch. I don't actually like scotch, but I understand old alcohol is better alcohol and I figured when will I get this shot again? So I decided I would order to Loch Lomond cocktail, which contained said aged scotch. While we were in line I overheard someone mentioning they had purchased it earlier and hated it, but I was undeterred. I was taking the high road and getting to Scotland afore ye if it killed me (COME BACK OFF KILTER).

Well. It didn't kill me. It didn't even maim me. But it was kinda gross - like thin mead with a weird aftertaste. I downed a little over half of it before giving up and chucking the rest in the trash. Meanwhile Katherine ate meat from Australia and fared much better than I did. Moral: don't drink scotch cocktails. Do eat meat. 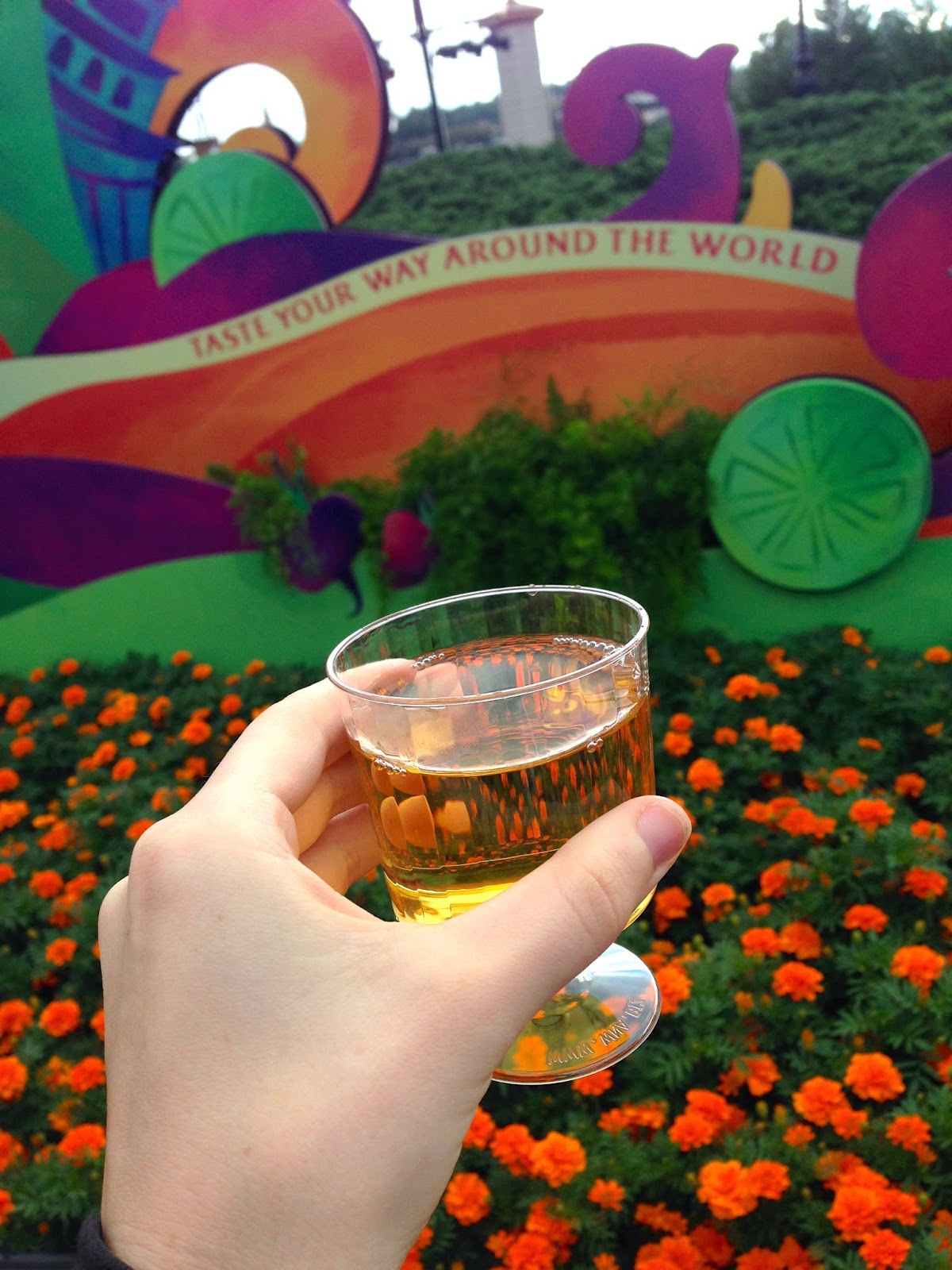 Hey, remember that tiger hat I modeled at the Animal Kingdom? Well, it was a completely impractical and frivolous purchase that I totally regretted not making and had lamented much in the chilly day previous. Jokingly I mentioned that the African Outpost might have it - and as we passed by I saw that they DID. Naturally I bolted over and used my Wine & Dine gift card on it. Money well spent as per usual.

My mission accomplished, we moved on to additional foodstuffs. Katherine bought more meat from Patagonia, and I stopped at Mexico (where the cast member complimented me on my tiger hat) for the sweet corn cheesecake. Verdict? My second favorite thing after the pao de queijo. It was really more analogous to a corn pudding than a cheesecake; in fact, I didn't detect much cheesecake texture at all. But if you enjoy sweet corn, you would very much like this. 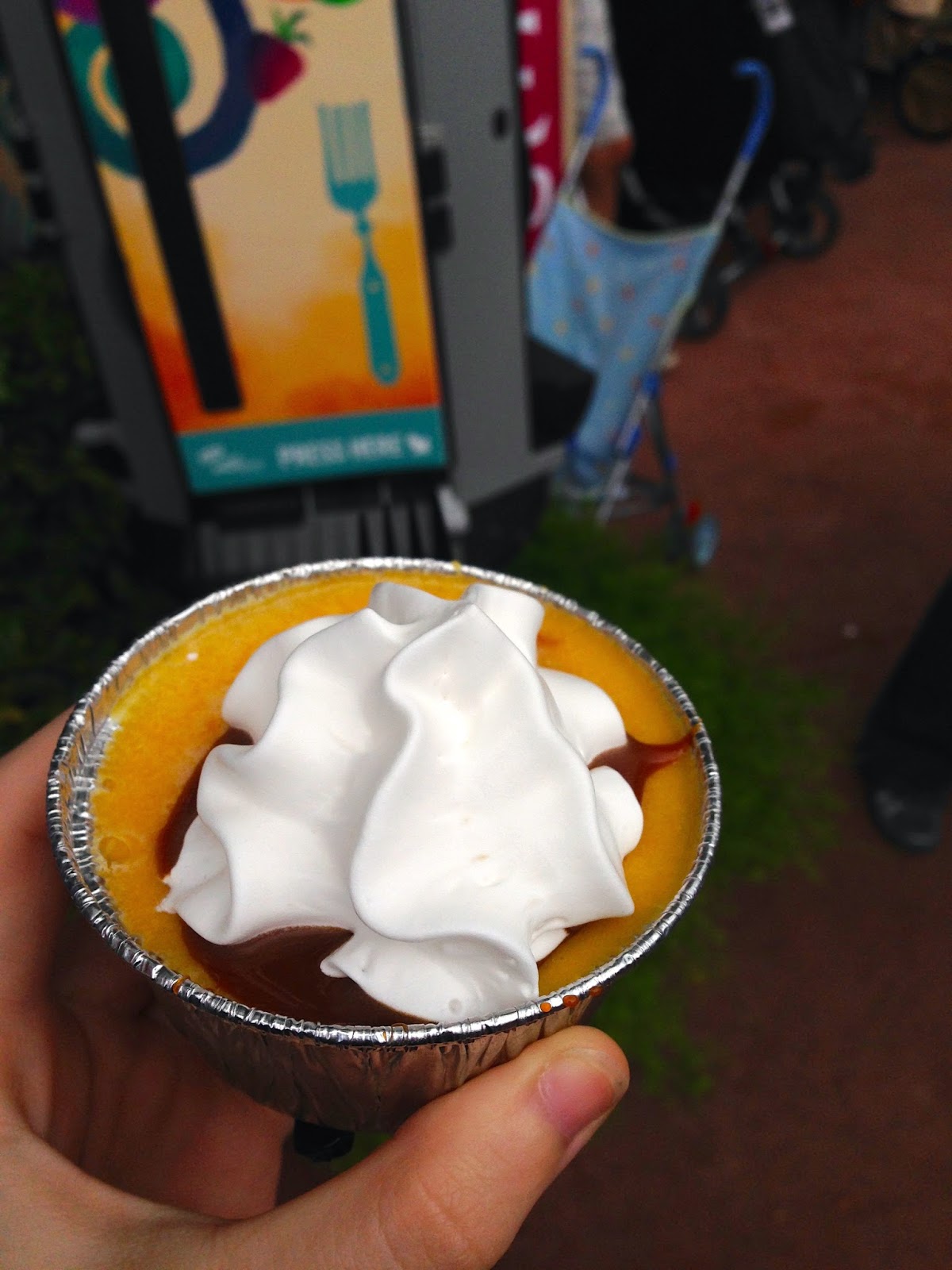 Our next stop was in the Germany gift shop to look for Haribo shark gummies, but alas, they didn't have any. They did have dinosaurs, which was almost as good, but my heart was so set on the sharks that I just couldn't work up the enthusiasm. I considered buying a delicious grapefruit beer to drown my sorrows, but I wasn't quite done with my Food & Wine purchases so I refrained.

Katherine and I had been experiencing Acute Phone Battery Drainage all day. The cure? Time spent in the Chase Lounge, accessed via exclusive elevator with the help of our matching Disney Visas. We availed ourselves of the Coke Freestyle machines (raspberry Coke is weird, guys) before settling on the floor in a corner by an outlet and watching the provided cartoons while we charged up. 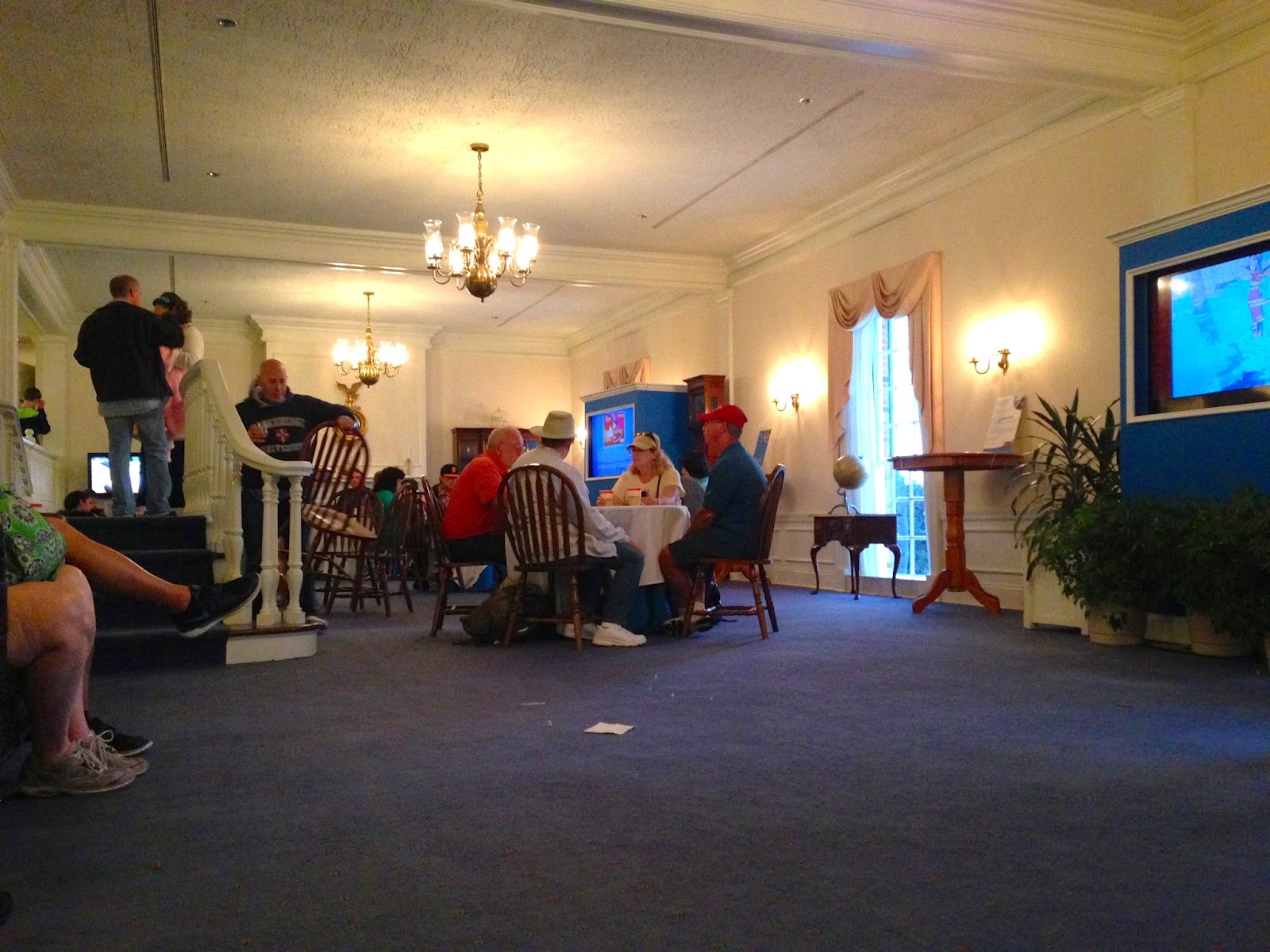 Then it was time for one last stop - Brazil again, where I convinced Katherine to get some pao de queijo and a cocada. I bought myself more pao de queijo, too, and it was just as good as the first time.


We located Estelle in France during snack time, and once everything was consumed it was time to head back to the Studios for our Fantasmic FastPasses. We passed Nicole on the way, fresh from an encounter with Alice, but she demurred joining us so we carried on without her. From there we took the path between Epcot and the Studios and power-walked past the Boardwalk, into the Studios, and directly to the Fantasmic amphitheater.

Well, not DIRECTLY - we had to hop in a massive FastPass line first. I'm confused about the precise value of the Fantasmic FastPass. My mom and I used it last December, and at that time I thought that standby line was held until the FastPass window had closed. This time around it looked like the standby line was being let in before the 7:45PM FastPass cutoff; when we entered the amphitheater, it was already largely full. Indeed, it was one of the most packed showings I've ever seen. We were way over on the other side of the stands from the entrance. 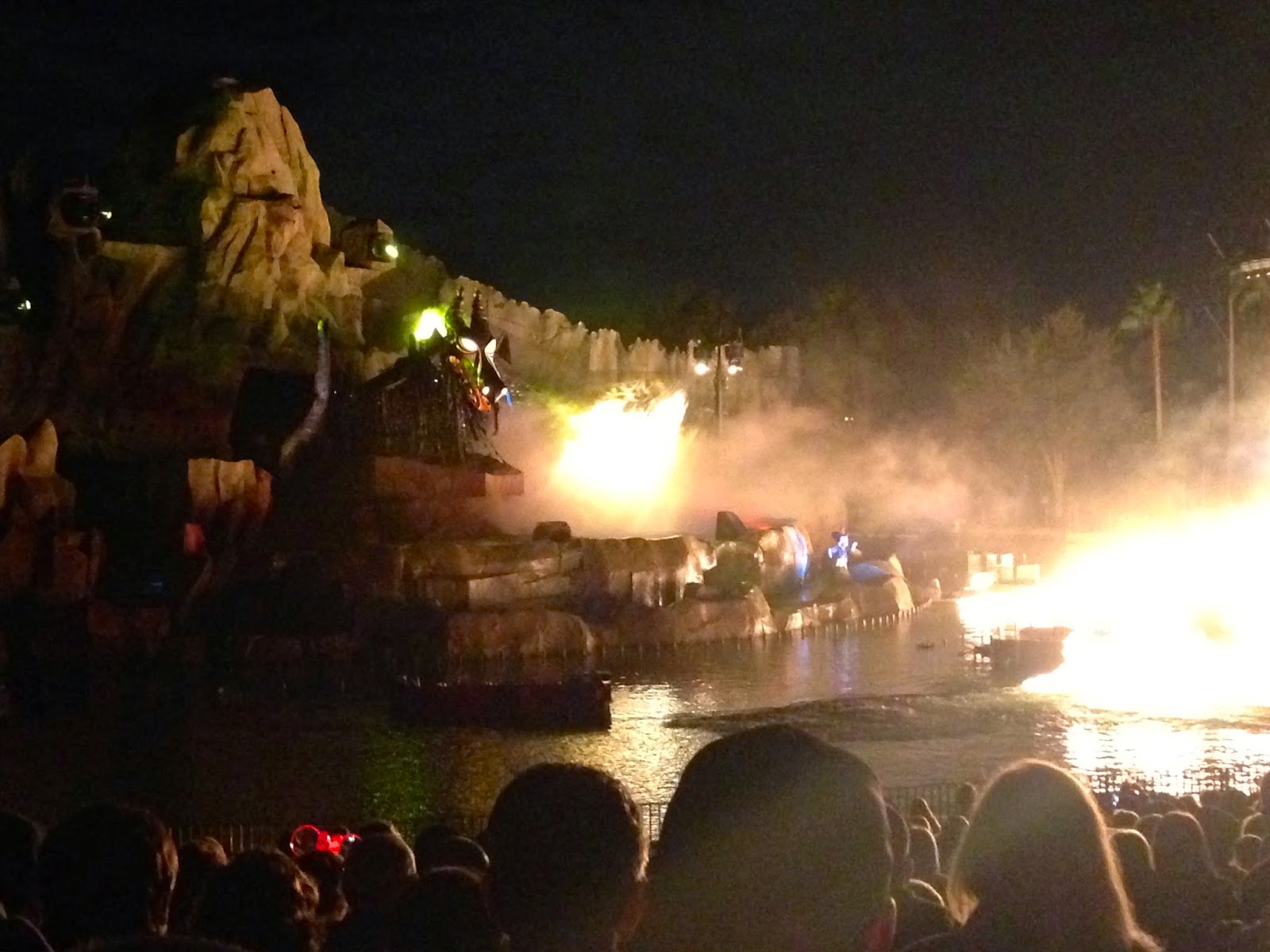 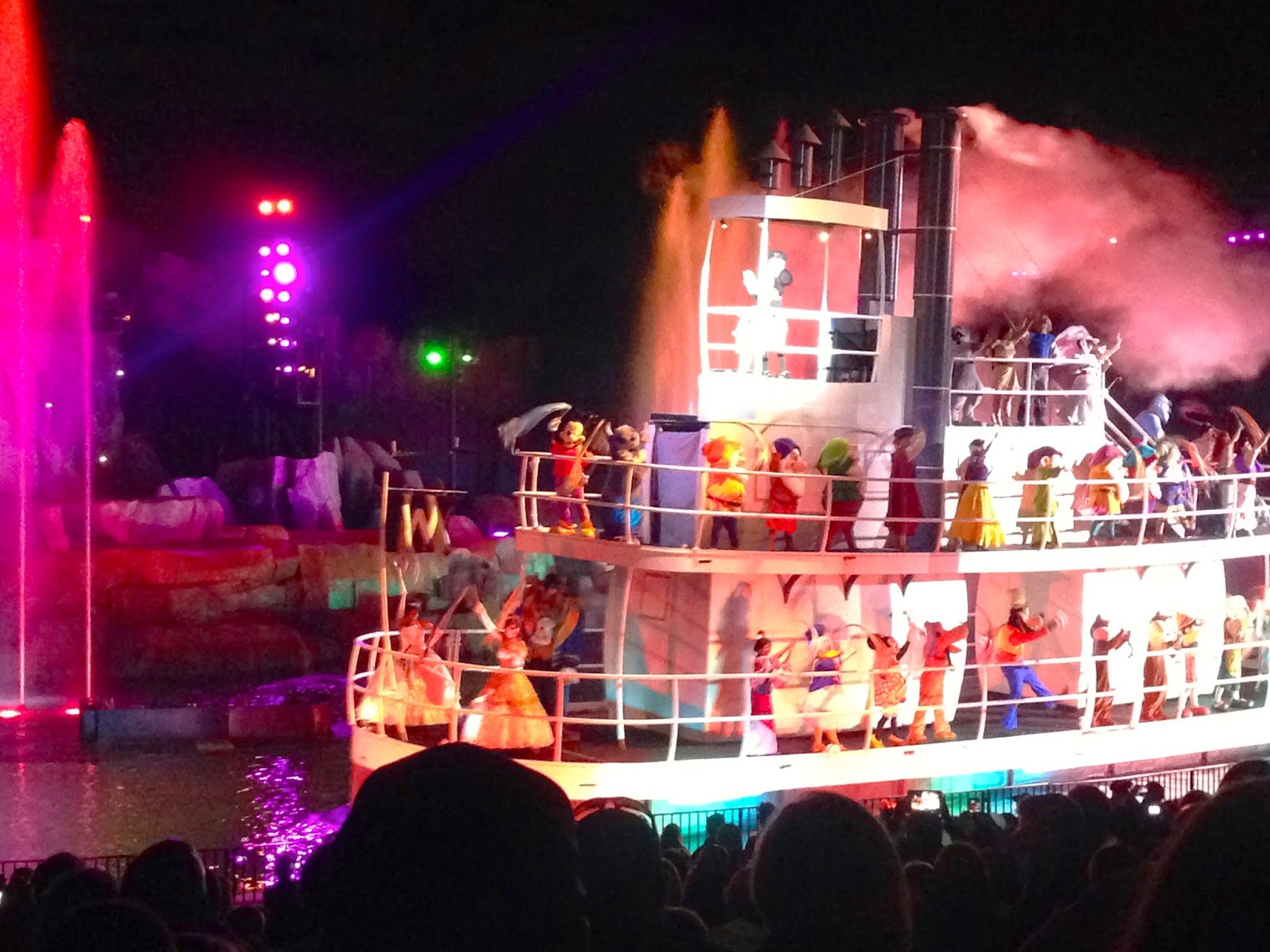 The show was great as usual, and we were close enough to the top that it wasn't too painful escaping back into the park. Extra Magic Hours were in place, and we scurried over to the Osborne Lights to make the most of them. The lights were beautiful and the snow was a wonderful touch, but my favorite part was when the lights danced to "What's This?" from The Nightmare Before Christmas. Festive! 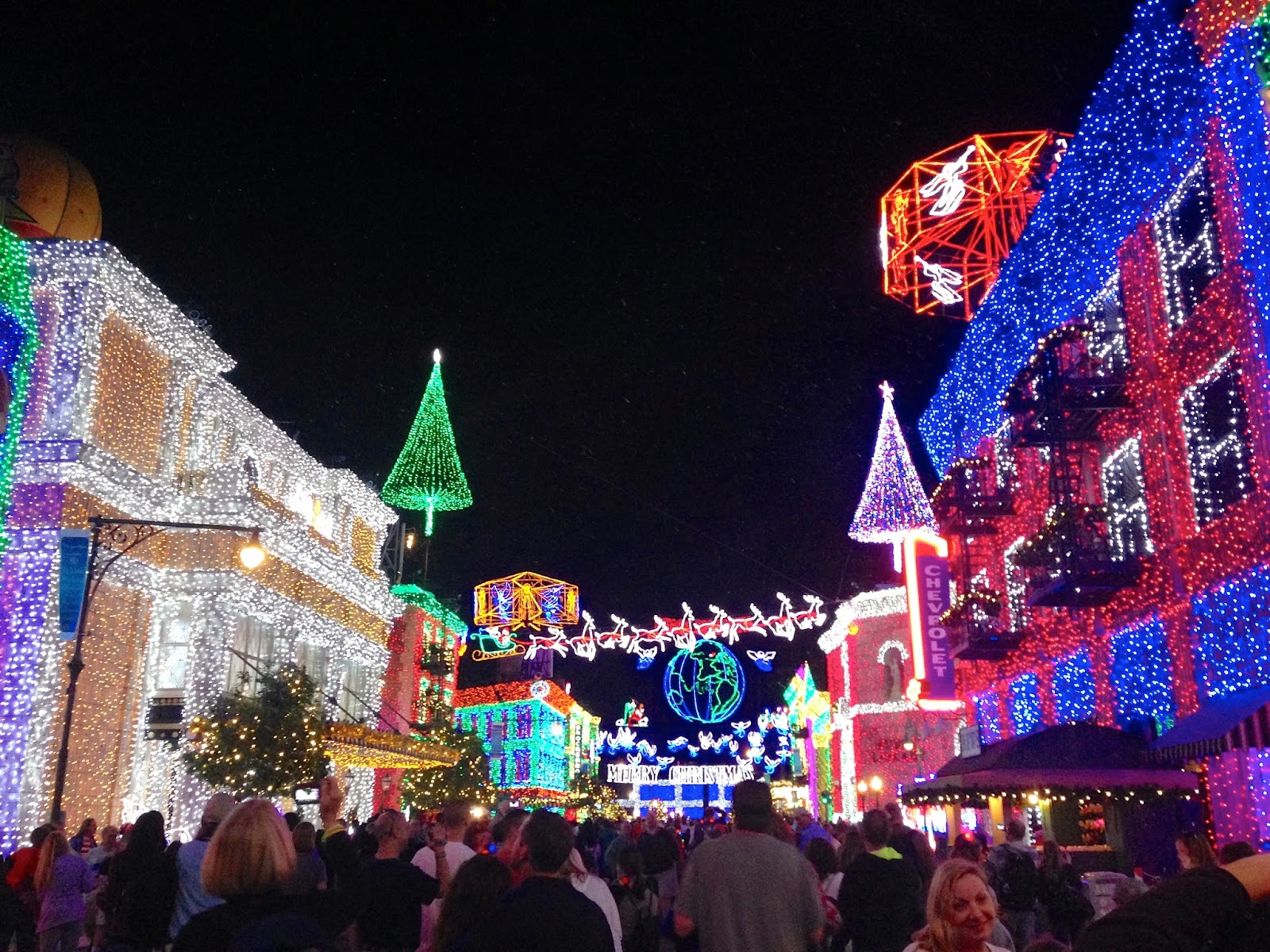 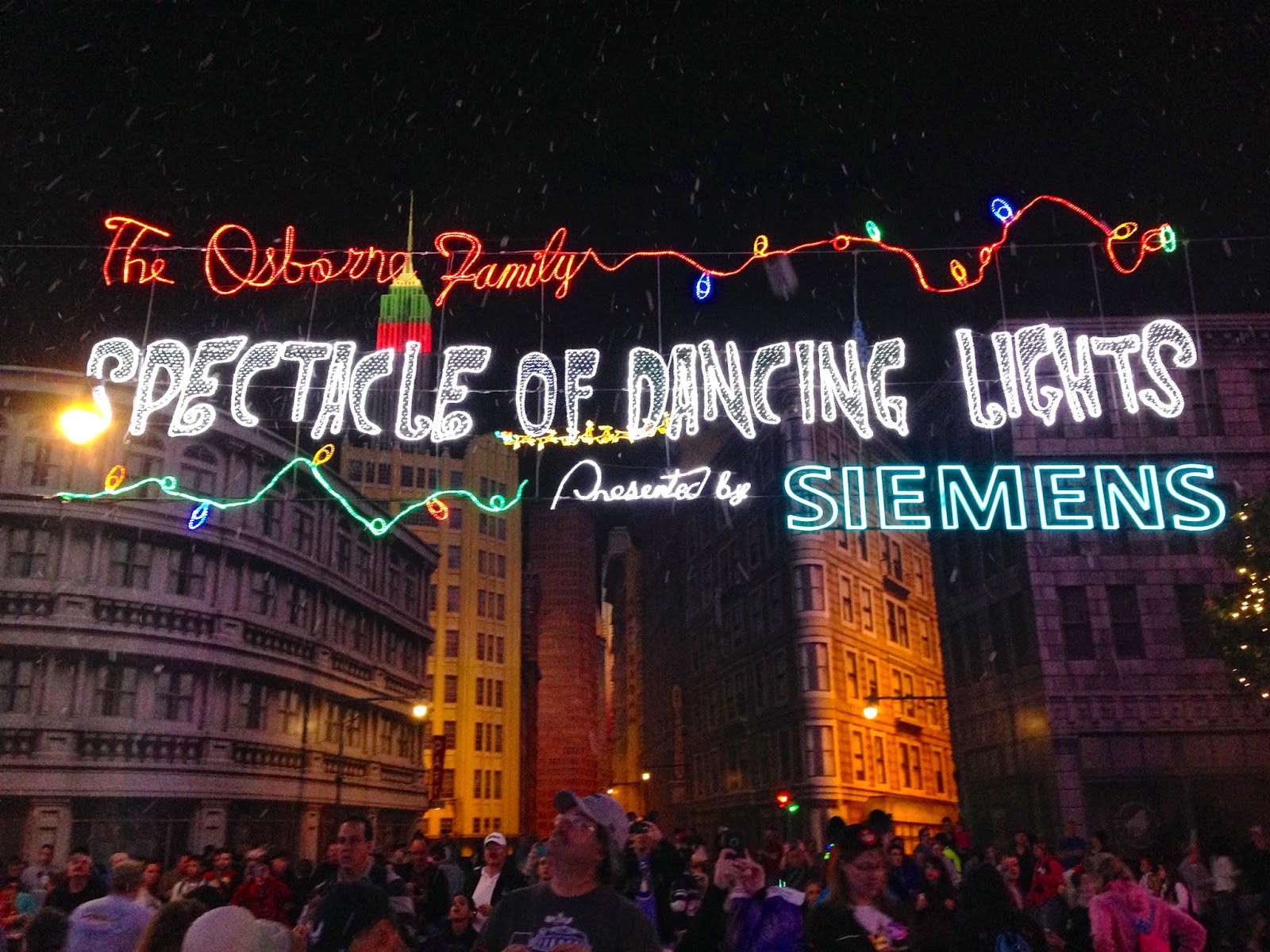 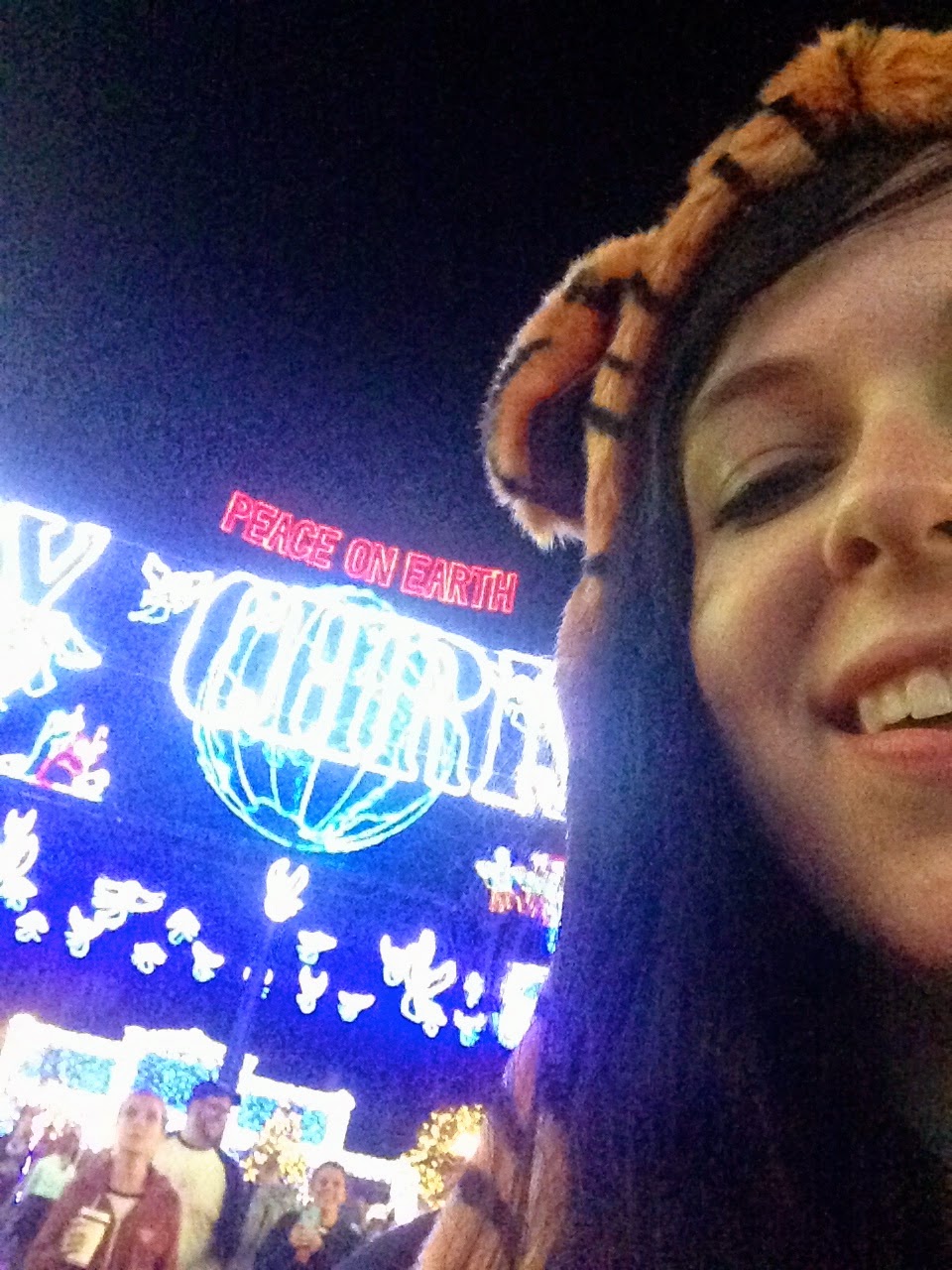 I felt like I hadn't shared anything with my Sharing Buddy Katherine in forever, so when I spotted a temp bar with specialty drinks, I coerced her into going in on a Winter Berry Margarita with me. It was wonderfully tart and tasty, but more importantly it had a glow cube. And that says CHRISTMAS, no? 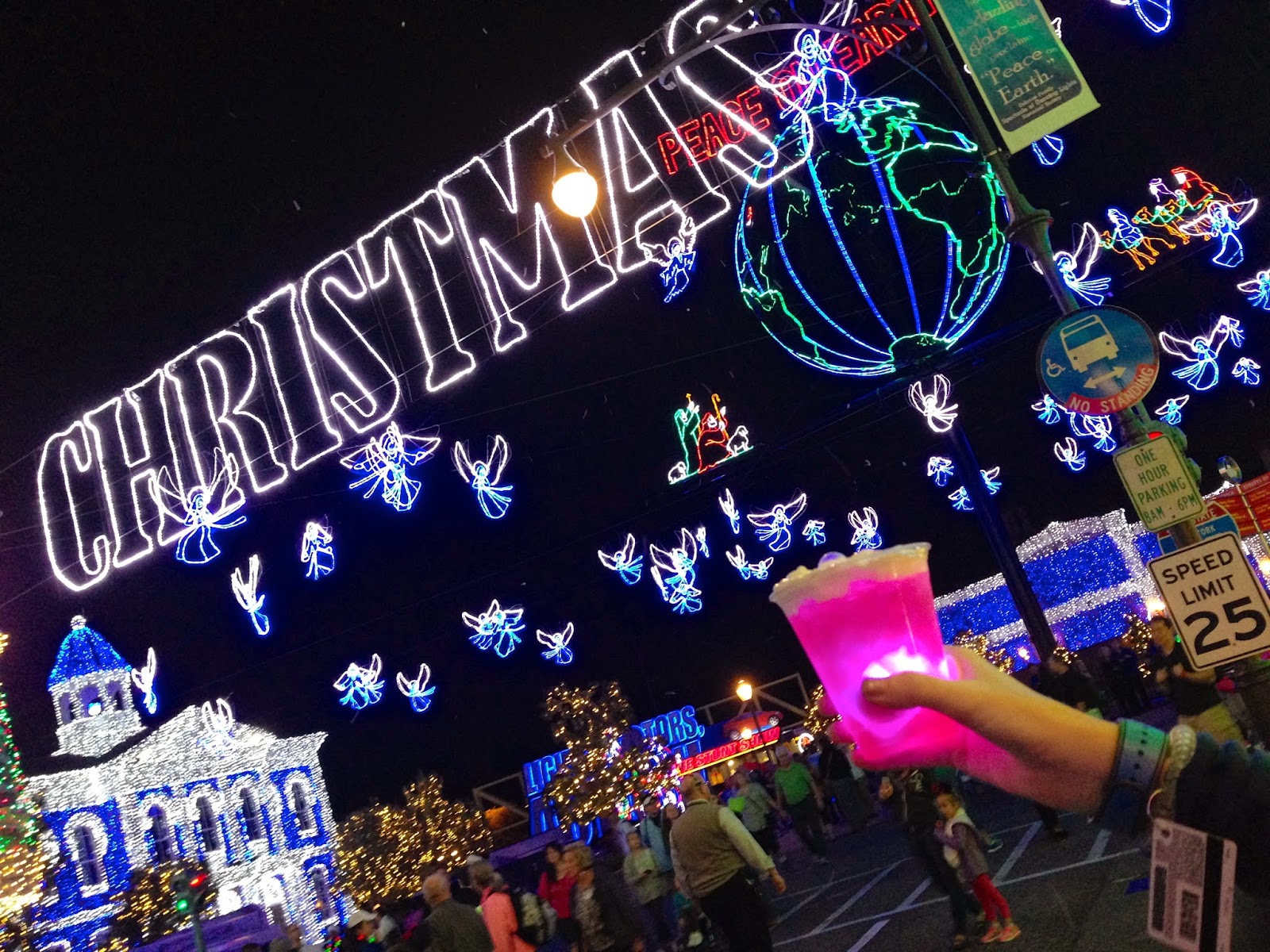 We whiled away an hour or so dancing around to carols, taking pictures, and generally being silly, but as park close grew near we couldn't shake the urge to ride one more ride. The eventual consensus was to walk over to Pixar Place and see if the Toy Story Midway Mania line was manageable. And it was in this way that I rode Midway Mania for the first time sans FastPass. Astonishing! Also: I had the highest score in my car. I don't have any point to attach to that; I'm just bragging. 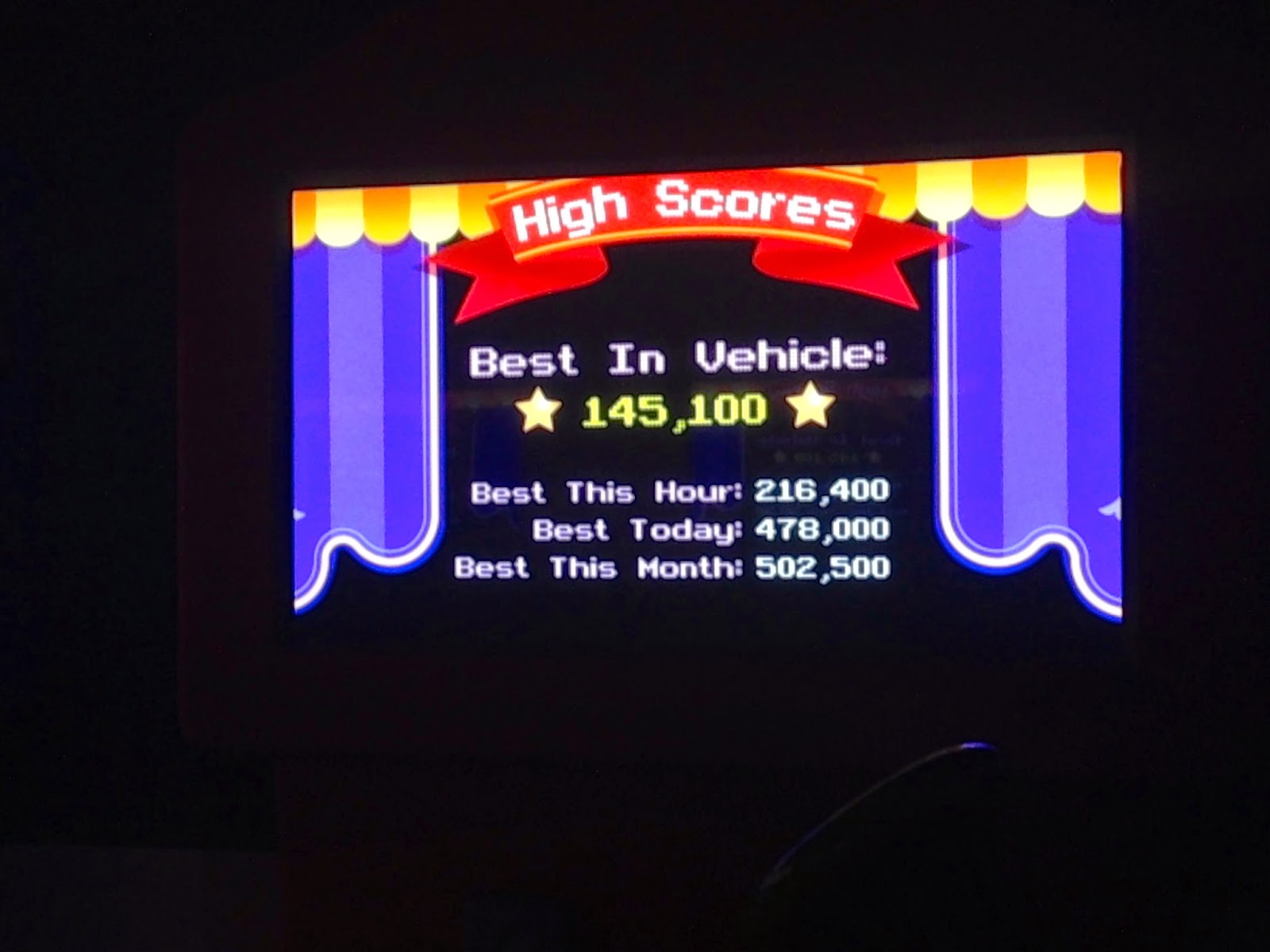 By the time we exited the ride the park was closed, and we were forced to make the sad march to the bus stop. The bus took foreeeeeever to show up, but we were finally deposited back at Art of Animation, where we made a quick stop in Landscape of Flavors for snacks. I debated buying some gummy bears, but Katherine promised me some Haribo gummy cherries and I no longer needed to make a purchase.

There was nothing left to do but pack. Sigh. I drank my leftover beer from the race and ate Katherine's donated cherries while I packed up, then showered and went to bed. Which I just mistyped as "bad" because the next day we would go home. And that's bad.

* WILL YOU STOP THIS FOOLISHNESS?**
** What foolishness would you like to see?