The Fairest Trip Report Of All: Wine & Dine Half Marathon Recap

Minus the Volkswagen connection, this should give you a pretty solid idea of what the 2014 Wine & Dine Half Marathon was like. In a word: wet.

Not that we were entirely without warning. The weather forecast kept flip-flopping in the days leading up to the race. For a long while there it looked like we would dodge the aquatic bullet. But, alas, it was not to be.

Backing up: after prepping myself for the race in our suite, not forgetting to don several bajillion wrist accouterments, Nicole, Katherine and I left the safe haven of Art of Animation for the bus line at Pop Century. The line was predictably long but there was a decent bus arrival rate and we had plenty of time. We collected Kellie on the way to the bus, thus completing her and Nicole's extremely impressive coordinating Genie and Iago costumes. 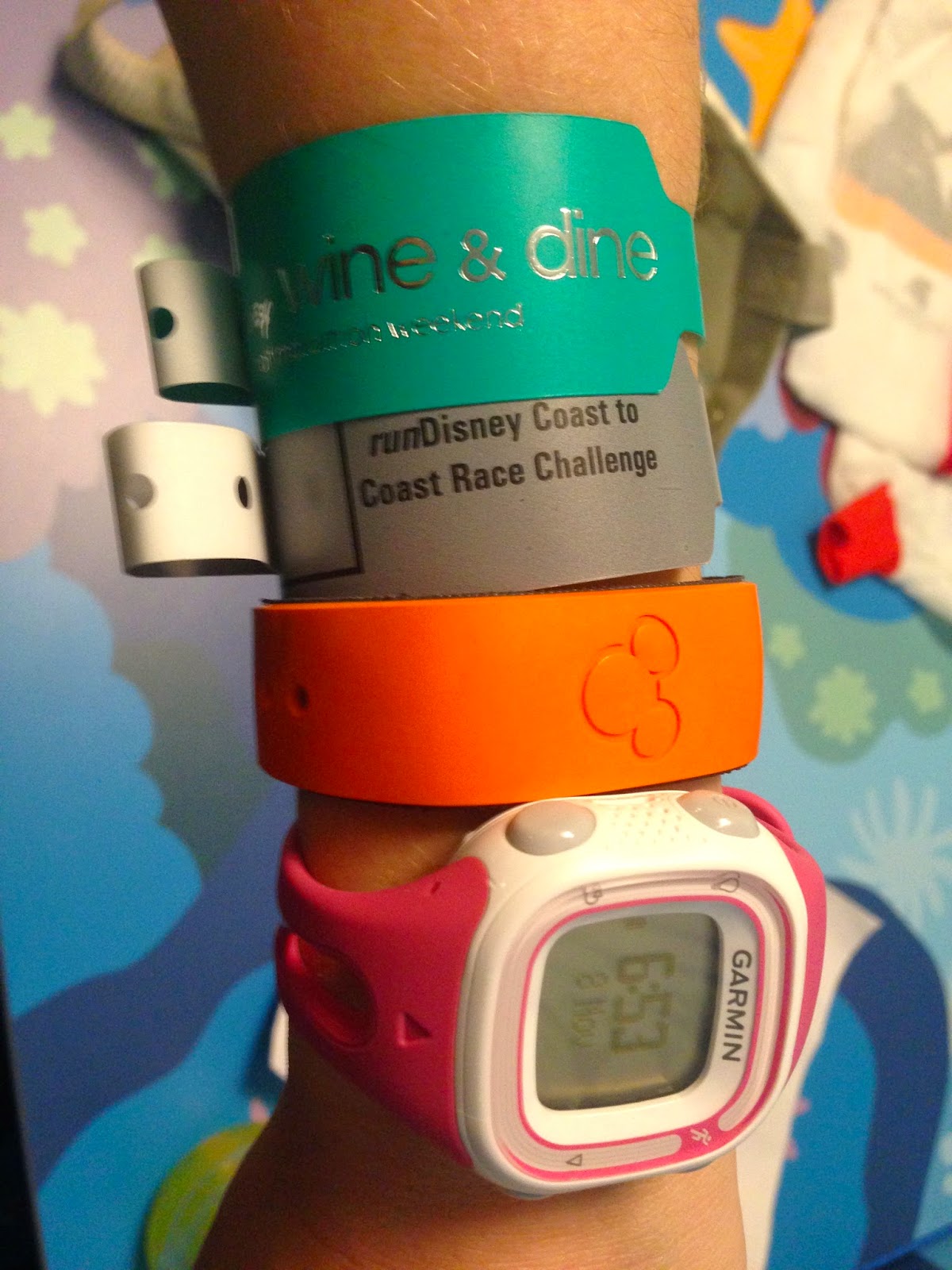 Pop is pretty darned close to ESPN Wide World of Sports, so the buses deposited us at the starting area almost obscenely early. We bypassed the lengthy lines to take a photo with a cardboard cut out of a champagne glass, instead meeting up with Kimberley, checking our bags, and wandering into the runners-only area and the water station.

Before we got rolling I decided it would be wise to hit the port-a-potties, so I hopped into one of many, many loooong lines. At some point I became aware that Danielle from Live, Run, Grow was behind me, but I didn't want to be all weird and just whip around and announce "I KNOW WHO YOU ARE!!!!" so I kept my mouth shut... until such time as I overheard her mentioning that she was looking for a Kellie who she had last seen at the NYC Marathon. So I whipped around and announced "I KNOW WHERE KELLIE IS!!!!" which is almost as bad but I had information to impart!

Anyway, Danielle (who was hanging with a Jenn who isn't me) took it all in stride, and post bathroom break our groups converged for the long walk to the corrals. Katherine and I ducked into the D corral just about as the rain was starting to make its presence known. Thank goodness I had brought that hat. 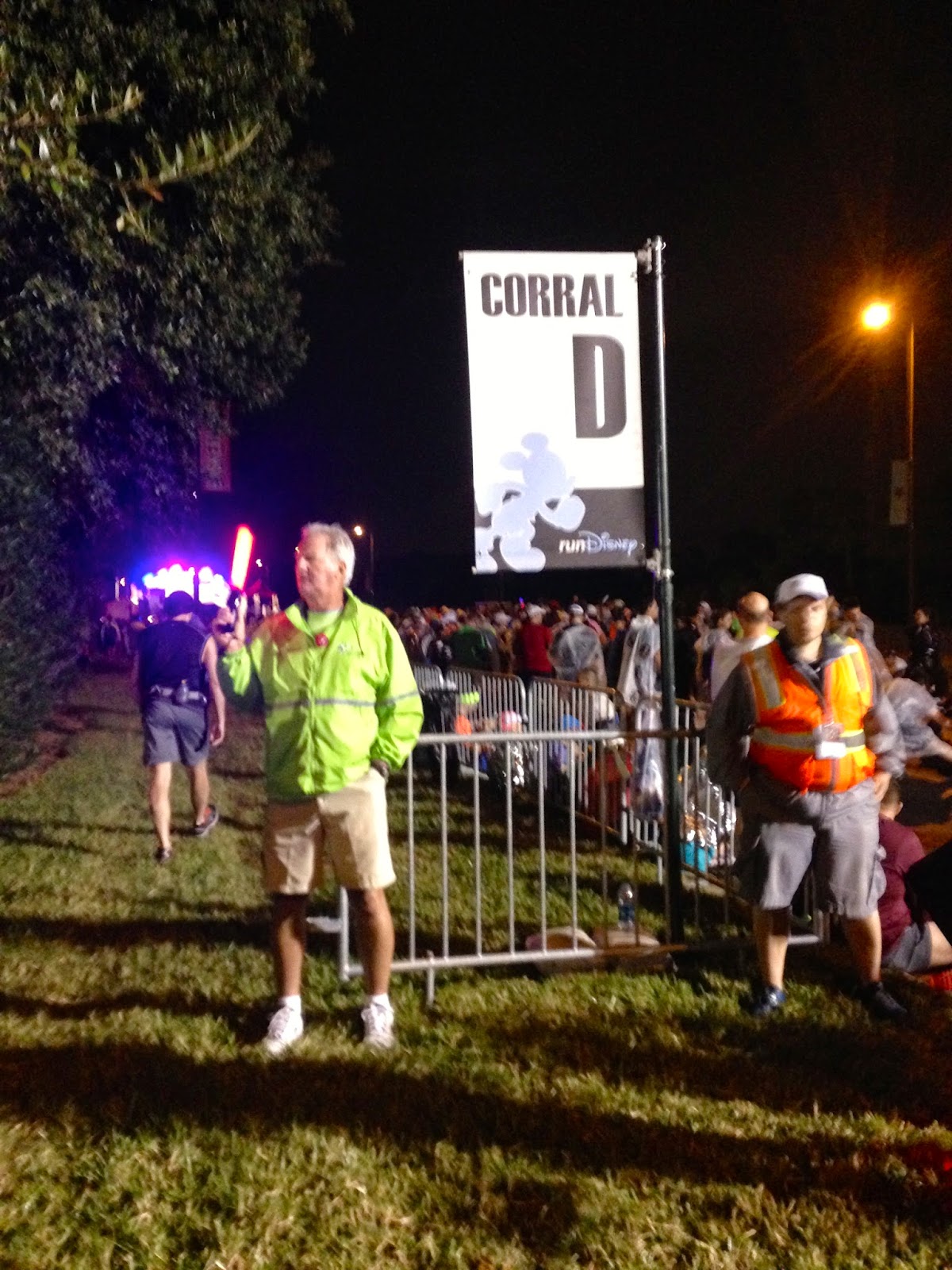 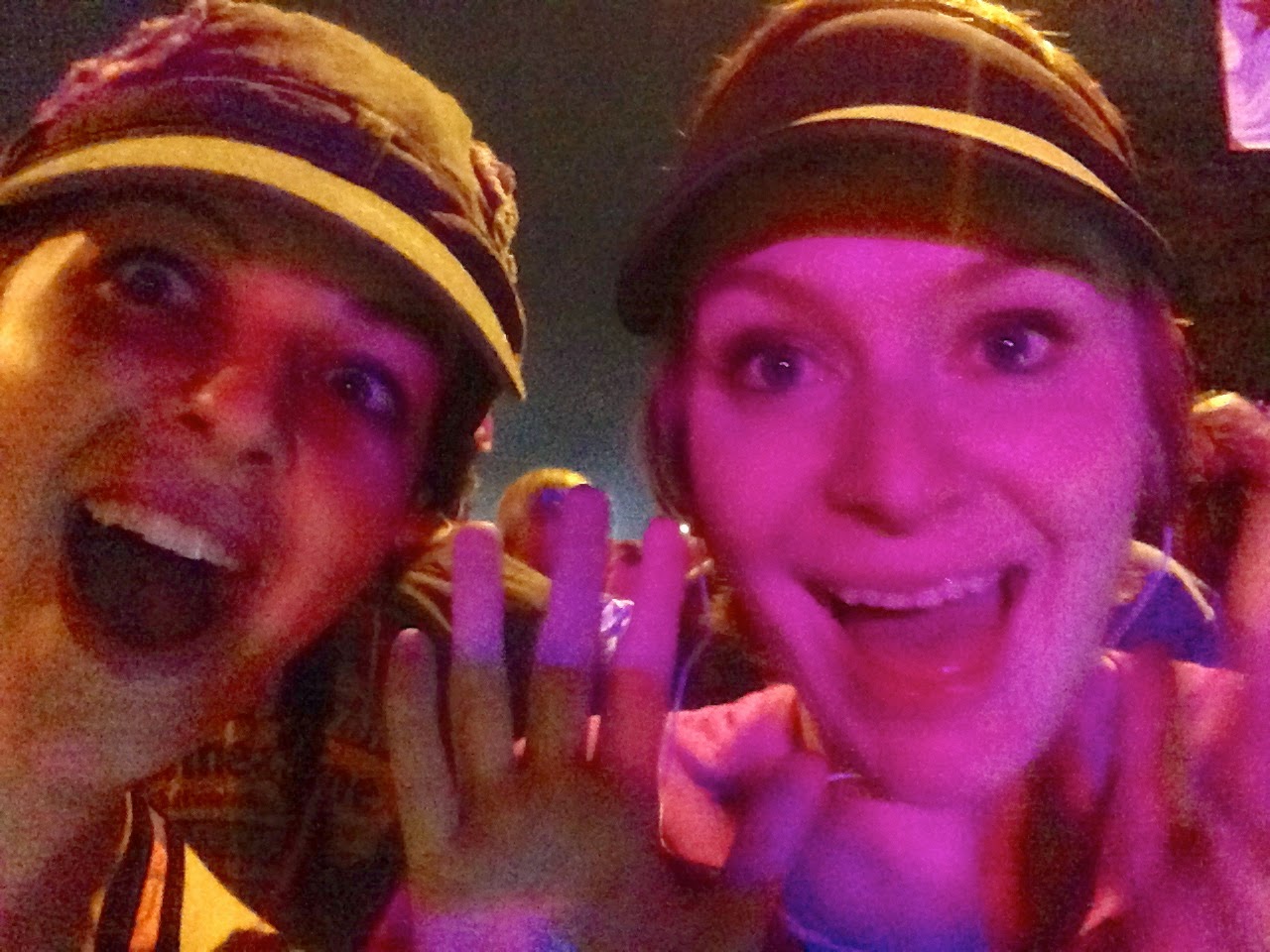 There wasn't much to do except kinda randomly futz around and lament over the weather until the corrals started moving forward. We shed our outer layers, high fived or something similarly affirmative (I don't remember; did we yell Steve Holt?), and we were off!

Or anyway Katherine was off - like a SHOT. I stuck with her for a bit but when she stepped on the gas about half a mile in I mentally wished her Godspeed and decided to stick with my current, slower pace. I didn't want to spend my post-marathon energy too quickly and make myself miserable later.

From here on my half was a solo act, but I really didn't mind at all. I had my music playing and I was at Walt Disney World and rain or no I was happy. I settled into a slow but steady rhythm and zoned out, although I did spare a thought for the poor Main Street Electric Parade character photo ops who were getting rained on.

Entering Animal Kingdom sure caught my attention, though! I saw Rafiki under the bag check area with pretty much no line, and kind of regret not stopping for a pic, but as he himself would say: What does it matter? It's in the past! I was too distracted by the glowing red fangs that marked the park's entrance.

Running through a park was as awesome as ever - a truly galvanizing experience. Gushing bathwater of the sky notwithstanding, I all but skipped my way past the Tree of Life and Expedition Everest, mouthing music lyrics and occasionally punching the air for emphasis because I am a dork.

I ran out of DAK and under a parking fee booth - where some FESTIVAL OF THE LION KING dancers were hanging out for photos! And being completely ignored. I very nearly caused an accident veering over to them, but caught myself, politely sidled off the course, and came up behind them, probably scaring them half to death. I was about to orchestrate a selfie photo when a Cast Member popped up to take the picture for me. 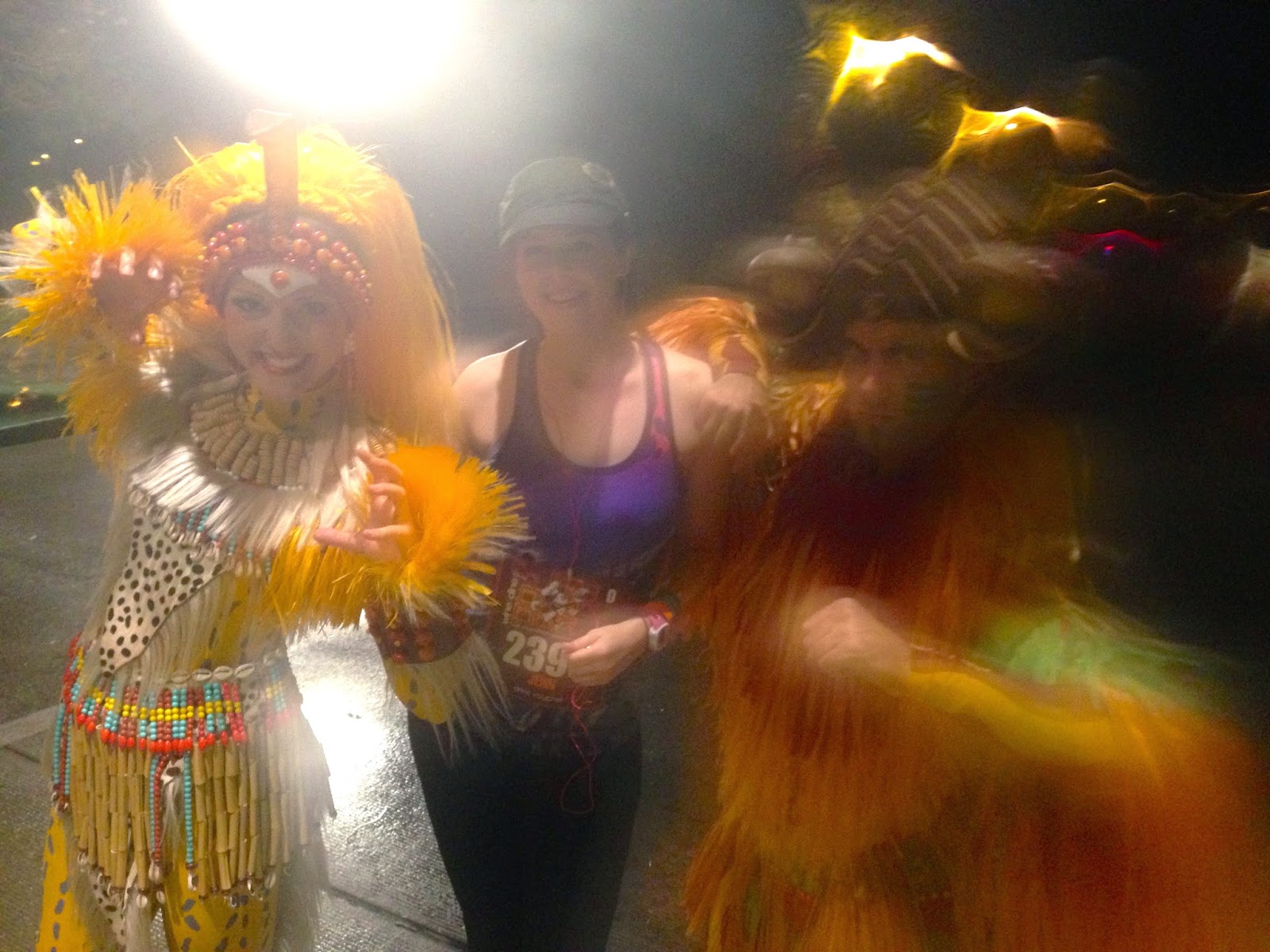 Naturally this whole time I was gushing like a crazy person about how much I love their show, punctuating it with a final "You're the best ever!" As I ran away I heard the cheetah girl yell back, "No, YOU'RE the best ever! Thanks for stopping!" And of course with this exhilarating event to propel me I knocked out my fastest mile of the race.

From there it actually got - dare I say it - a little boring. It felt like it took FOREVER to run the roads between DAK and the Studios. A lot of characters weren't coming out because of the rain, and the running conditions were getting a little questionable, too. I never had any close calls, but I discovered it was wise not to step on the slippery paint jobs on the asphalt. That and with the darkness and the reflection of the rain I needed to concentrate if I didn't want to lose depth perception. (Actual momentary thought: OH MY GOD WHERE EXACTLY IS THE GROUND???)

After what I can only assume constituted approximately fifteen years' worth of running, we made it into the Studios - where I got teased like all get out. I caught a glimpse of the Osborne Lights and I was all "SQUEE! It's happening!" And then the course turned me AWAY. I was a little mollified, though, when I discovered that we were now running through the workshops tunnel from the dearly departed Studio Backlot Tour (complete with disco ball, for some reason). The lights for the costume shop and everything were on, and it occurred to me that this might be the last time I ever saw them, so I drank it in.

Finally, finally, FINALLY I came upon the Osborne Lights, where I got my photo taken but it didn't turn out that great. I'm surprised they didn't have a ton of official race photographers staking out the area. I was also surprised by how quickly I ran through it, but it was still a magical experience. 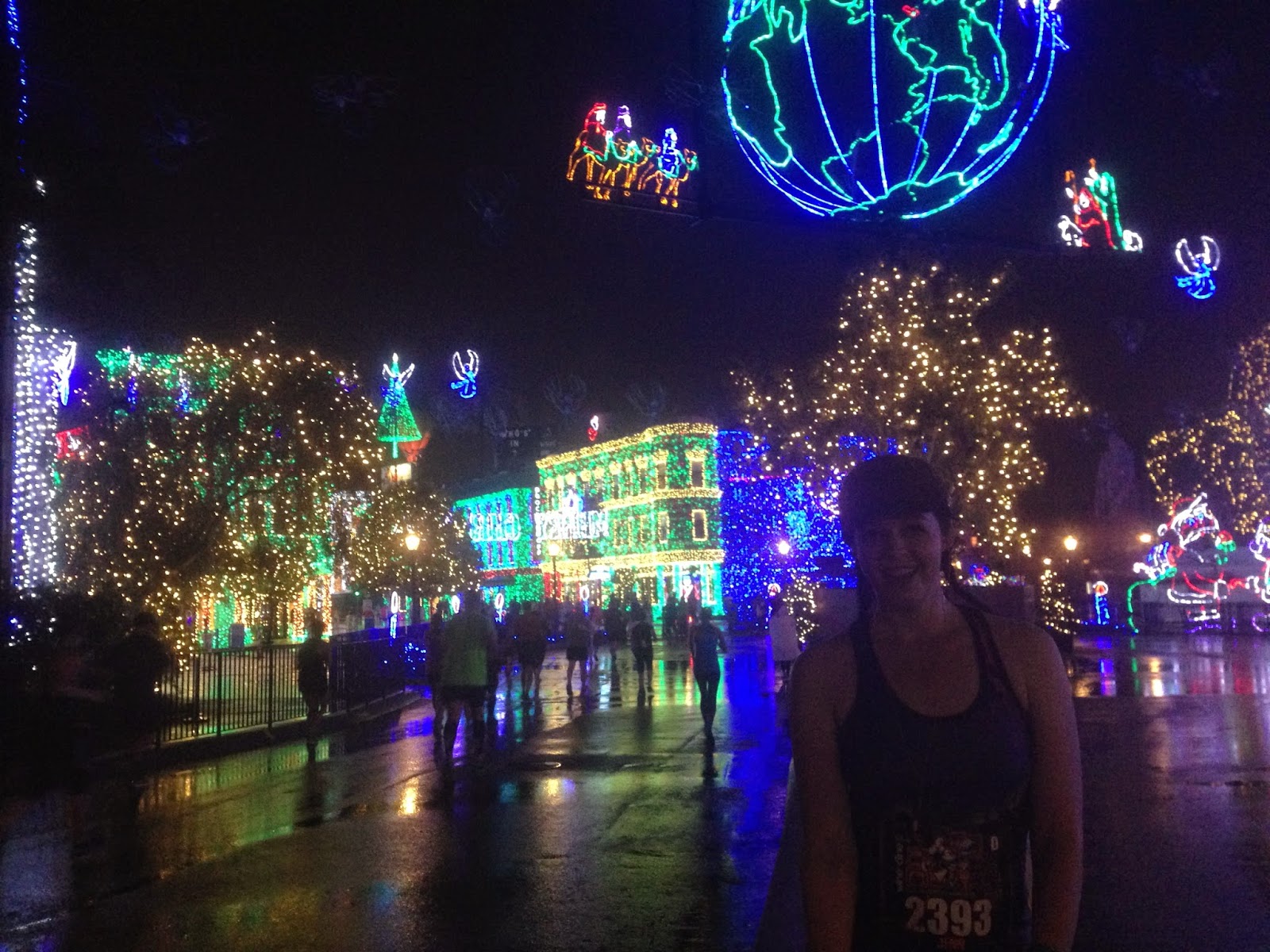 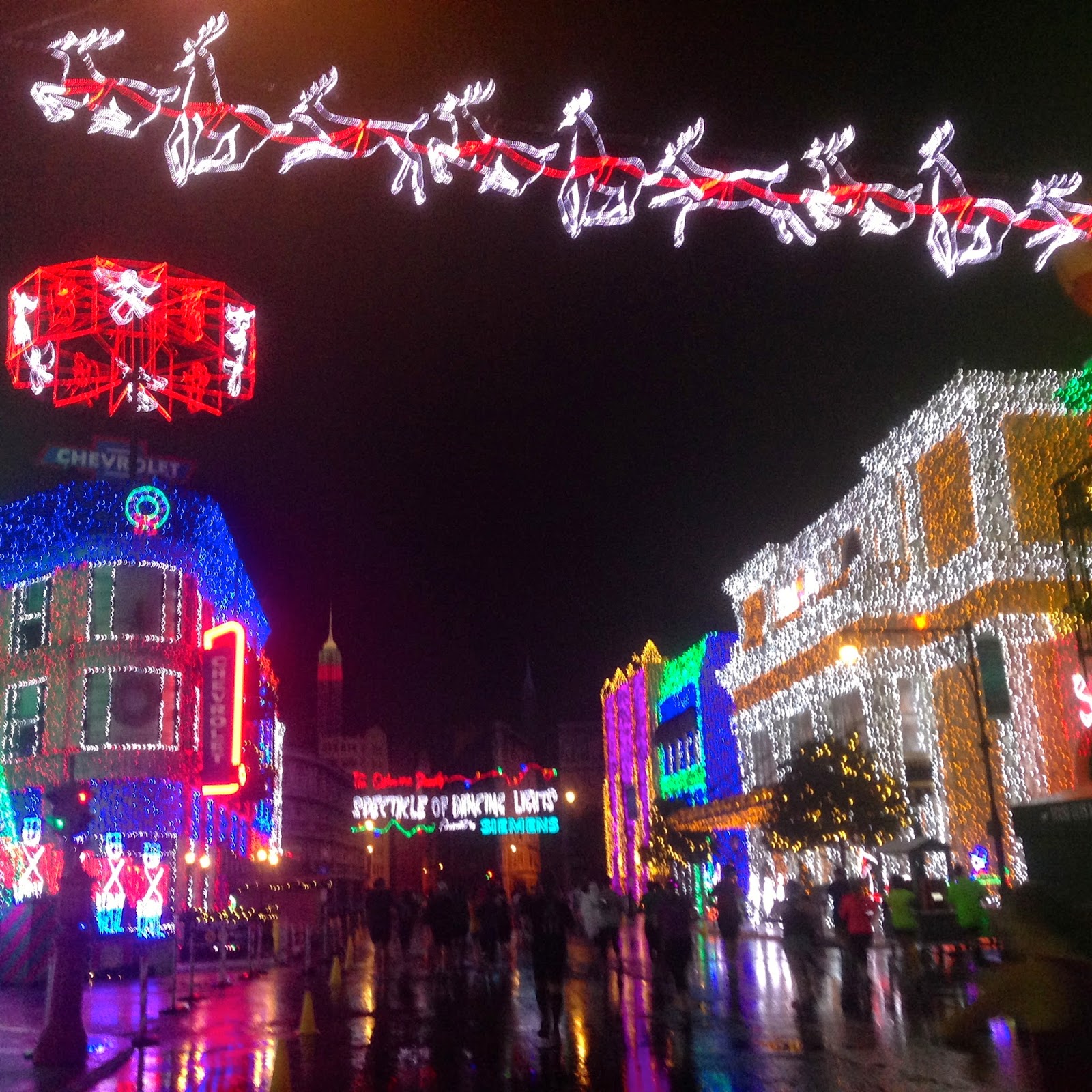 Shortly after that the course snaked out of the Studios and I had a disheartening experience: I observed that we were going to run to Epcot via the Studios-Boardwalk-Epcot walkway, which meant I knew EXACTLY how far I still had left to go. Which, with my post-marathon legs and the by that point getting ridiculous rain, I had very little interest in doing. Running while essentially taking a two-hour-long shower is a novelty that wears off pretty quickly.

But there was nothing to be done but continue to put one foot (carefully and firmly) in front of the other and press forward. The no-joke rain and chill had driven most spectators off the course, but the Boardwalk resort area path pulled a few people from their rooms to cheer which boosted morale a bit. A couple of smart and prepared people had even erected a tent for the purpose. And of course the Boardwalk lights were beautiful as always.

We crossed the bridge and entered Epcot via the International Gateway - almost there! Indeed, even more almost-there than I expected; by my recollection barely any of the course made its way through Epcot. We pretty much went straight into Future World, past Spaceship Earth (where was the gospel choir, b t dubs?), and then hit the finish.

Speaking of the finish, I saw as I approached that the clock read 2:29 and change. Not that clock time really mattered, but I liked the idea of coming in under 2:30, so I powered forward and finished at 2:29:58, with a net time of 2:20:25. Not a PR by any stretch, but not bad under the circumstances. 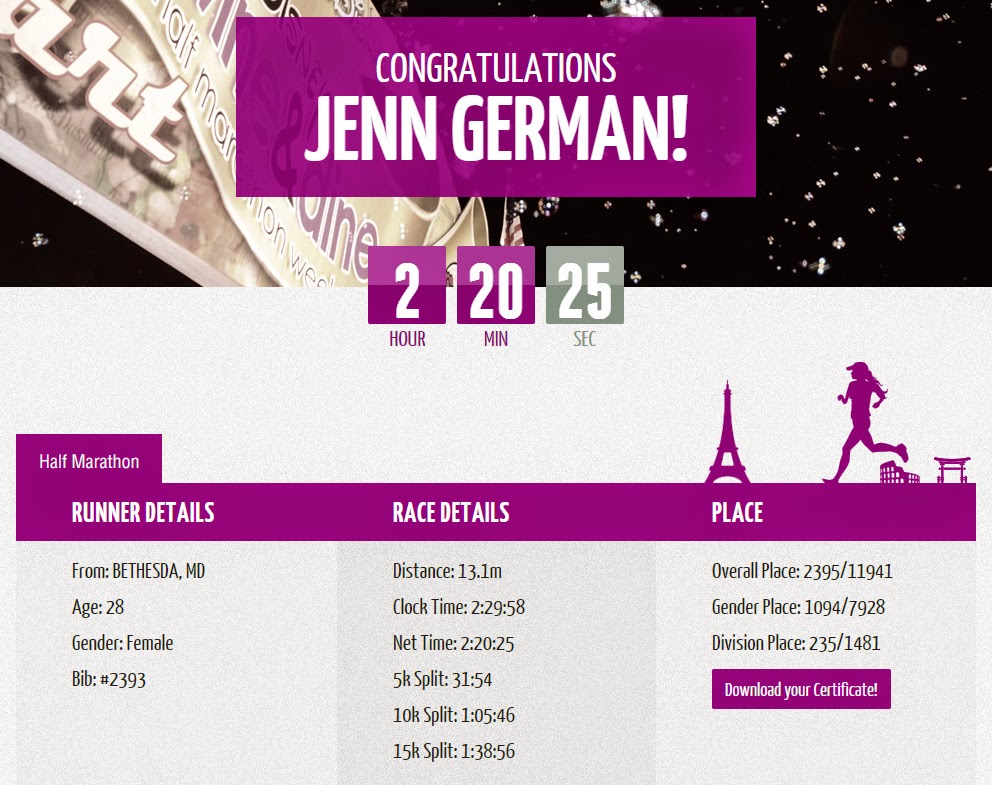 I pressed through the finish area, collecting my space blanket (never more judiciously deployed) and a random Yeungling that I told the guy not to open; I just chucked it in my bag. I got my regular medal, got my Coast to Coast medal, got my food box and PowerAde, got my checked bag, and headed into the changing tent. 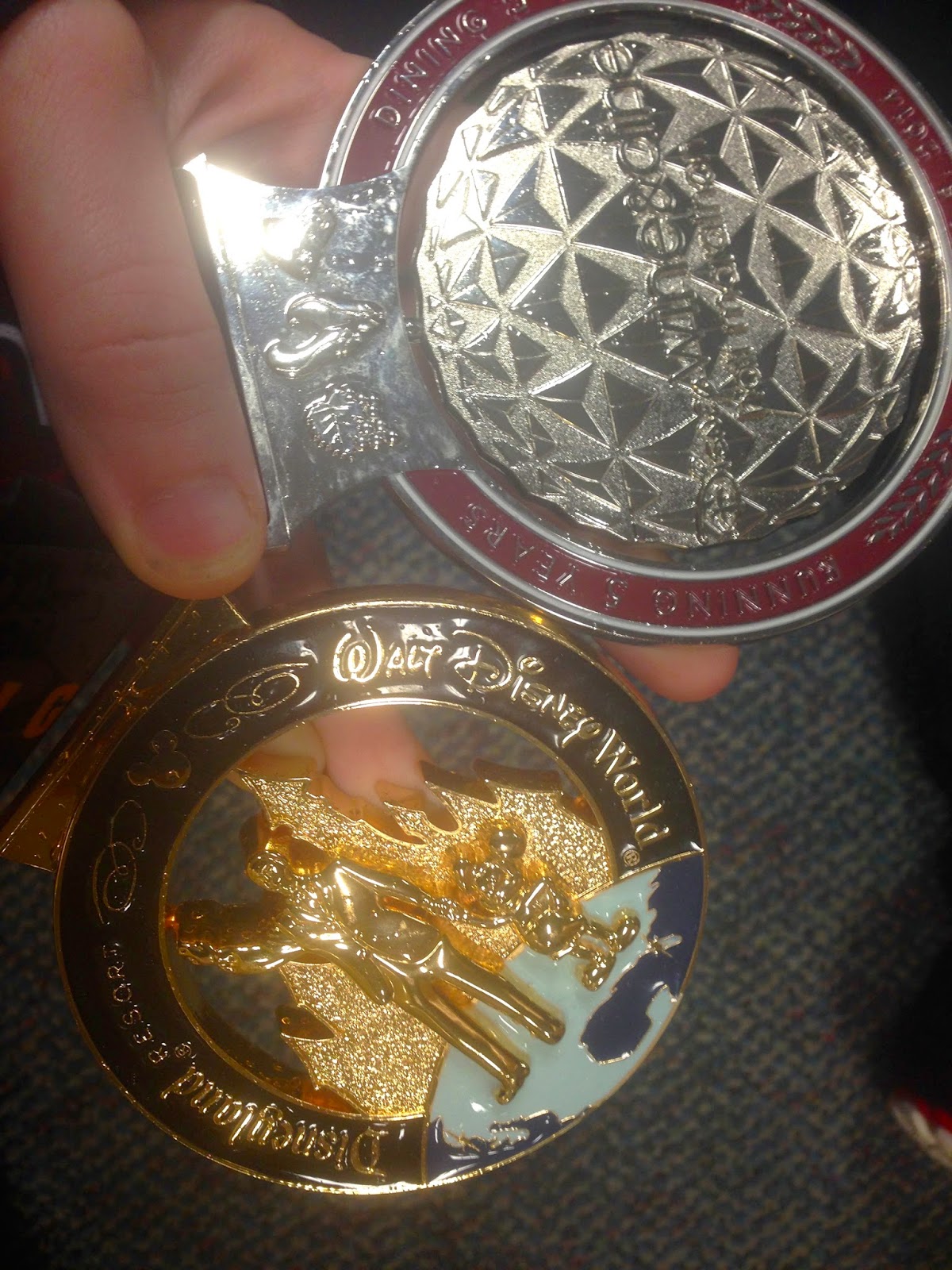 Which was a MAD SCENE. There was no organization and no privacy, and spacing was a total free-for-all. Hey, at least it was heated! I put my stuff down on my space blanket and shuffled things around for easier carrying. I was wildly pleased with myself for having the foresight to pack a complete change of clothes, but the changing tent was so crazy I just swapped out my shirt and sweatshirt and headed back out into the cold.

Next stop: the after party! Because no way was I missing the after party no matter how discouraging the weather might be. But this post has gone on long enough, so we'll get to that tomorrow. See you then!