Stretching out the trip report with restaurant reviews! You can see all the entries in this report here. Okay, onward!

'Ohana means family, and family means nobody doesn't get a Lapu Lapu. 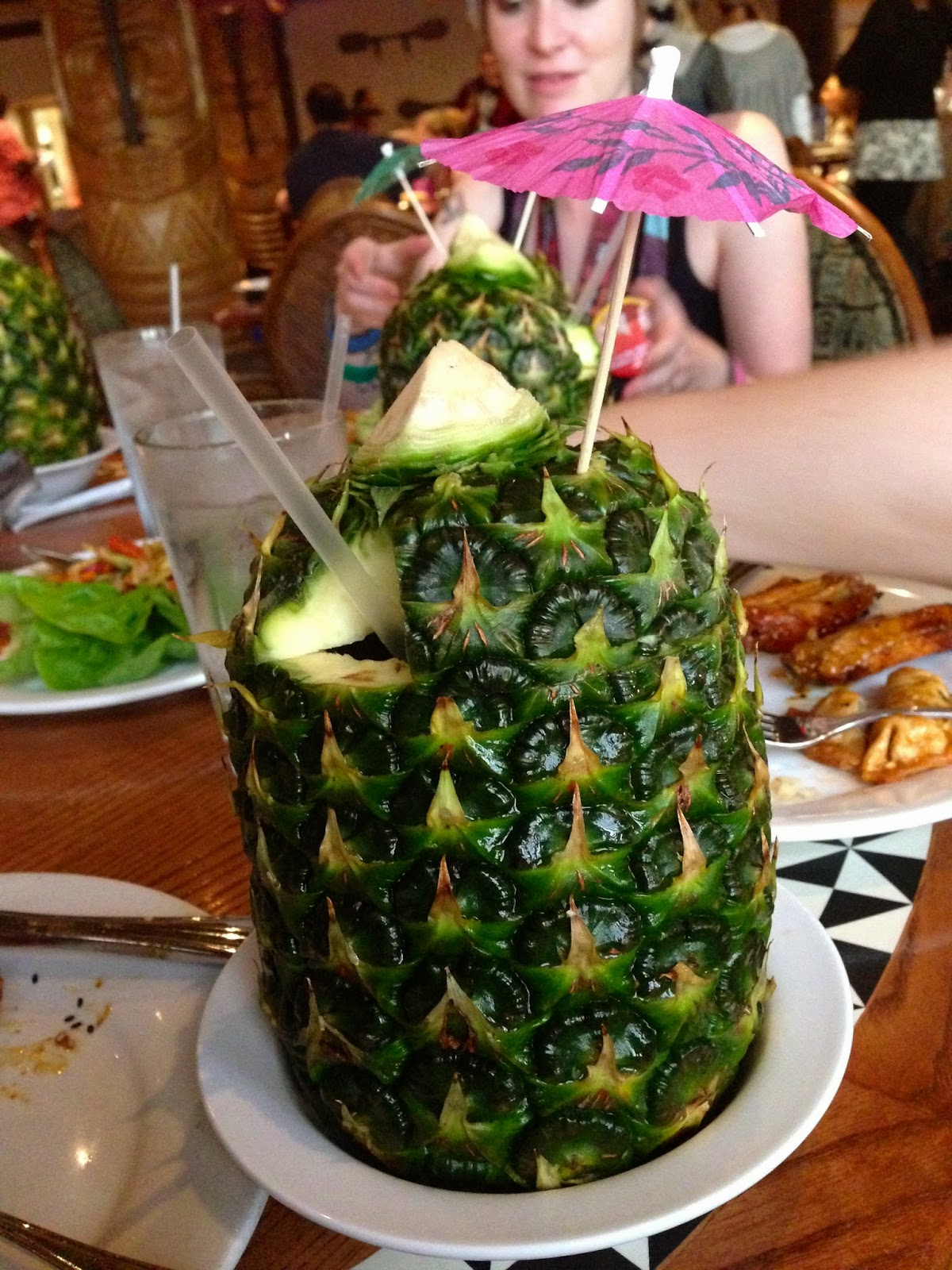 Our second ADR of the trip was for an early dinner at 'Ohana. Katherine, Estelle, DeJanea, Erica, and I had a great table by the window overlooking, well, the construction currently muddying up the Polynesian - but ALSO of the Magic Kingdom and Cinderella's castle, so that was nice. We got to see the sun set over the castle followed shortly by the lights turning on. 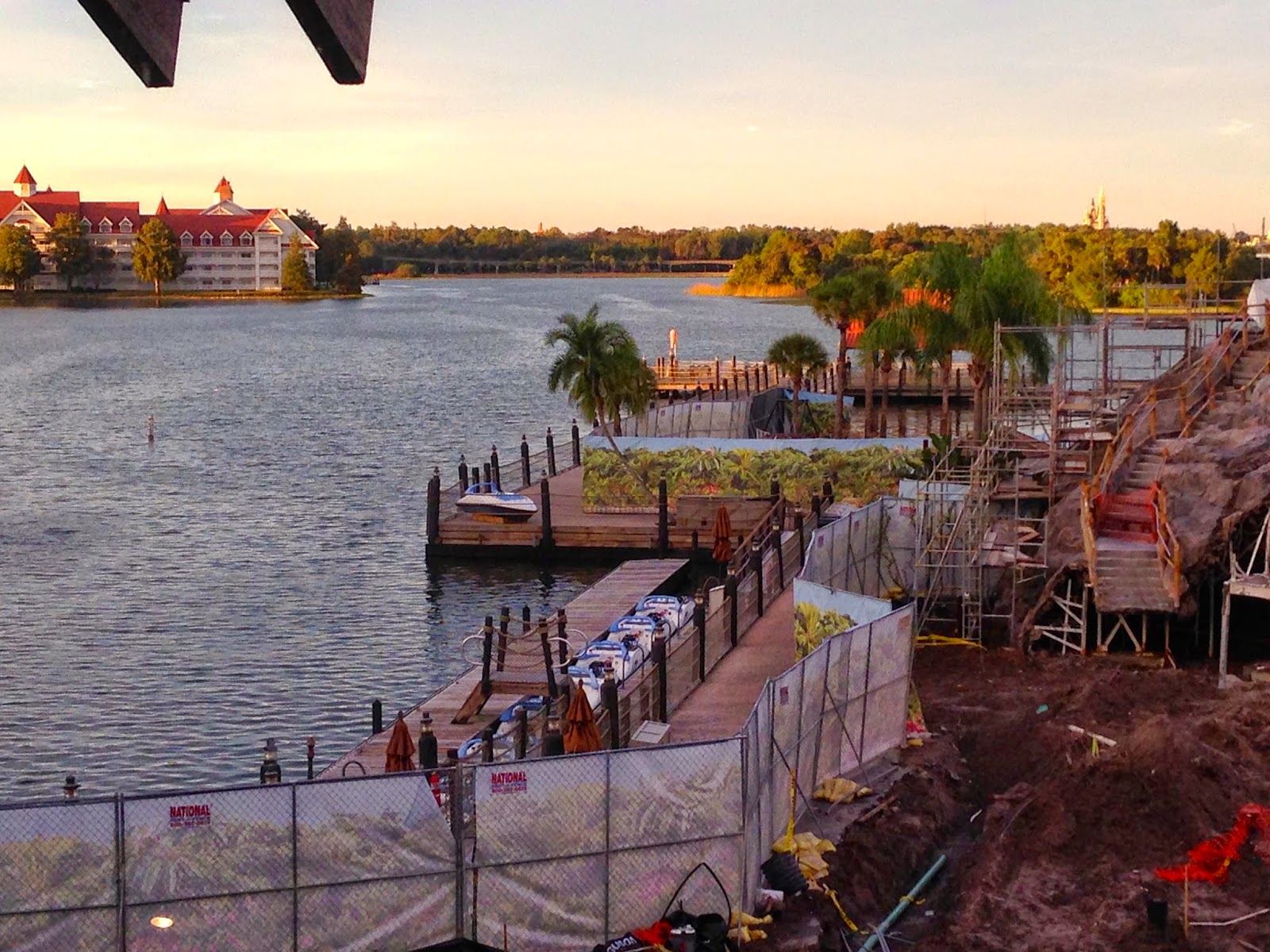 The very first order of business upon the arrival of our server was to order Lapu Lapus all around. Katherine has been singing their praises for several billion years, and it was great to finally try my own! The rum mixture inside packed a decent punch, but mostly I was just tickled to be drinking out of a whole pineapple. Not just a whole pineapple, but a pineapple WITH a little paper umbrella. That's the dream, no? Yeah, they're expensive, but I think that alone is worth it. I just wouldn't order several in a given trip.

While we were sipping, the first course arrived: coconut-pineapple bread with butter (macadamia nut butter? I don't remember). I dunno - this is a cult favorite, but I've never been anything but mildly impressed with the bread. It's good and all, but not out of the common way. If you don't like bread with butter already, you're unlikely to get all excited about this variation. 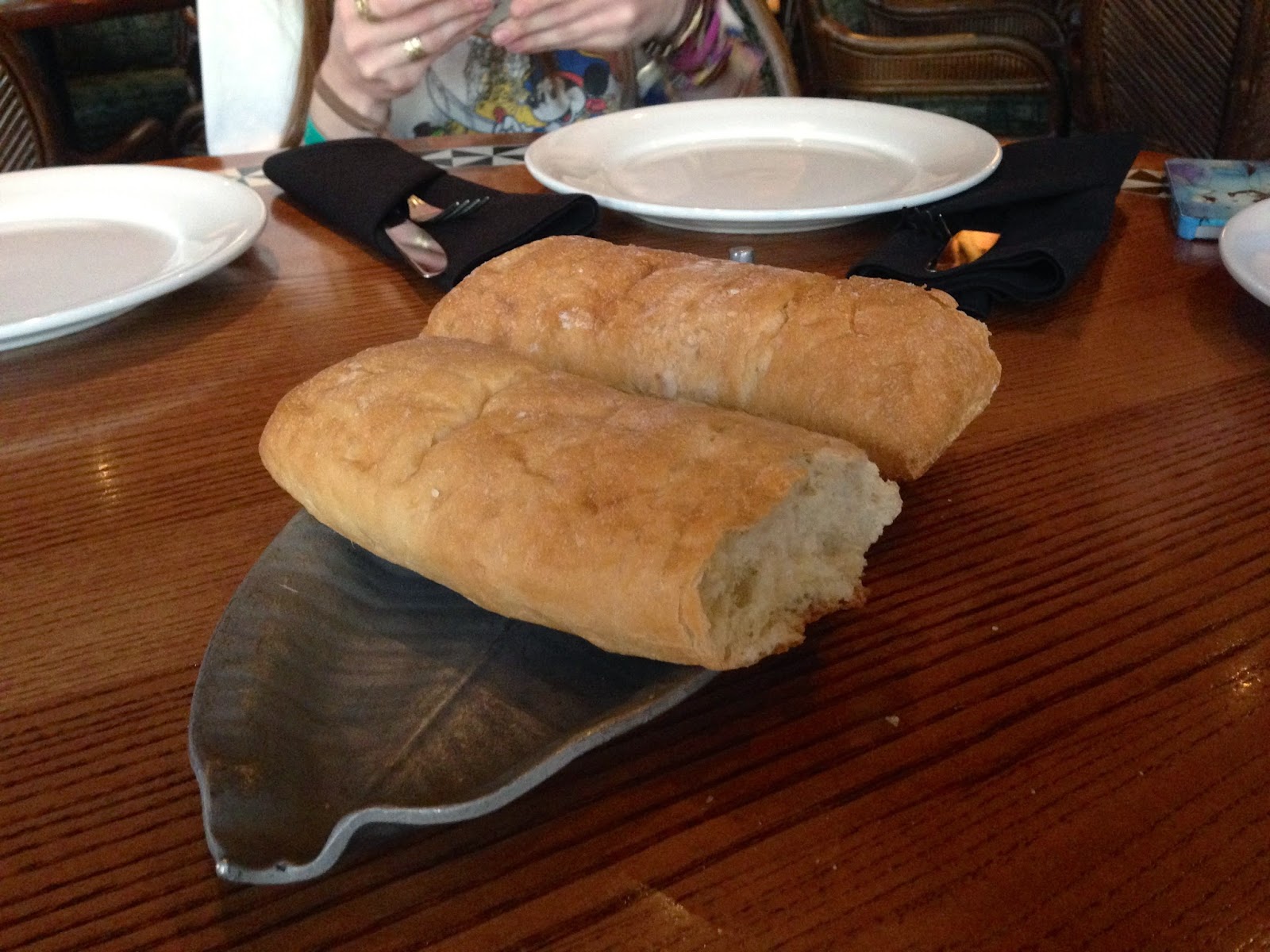 The second course yielded sesame wings, pot stickers, and lettuce wraps. The sesame wings were a big hit at the table, and I found them to be pretty good, but I wasn't willing to sacrifice more than one or two's worth of stomach space. Same deal on the pot stickers. I was not at ALL into the lettuce wraps, and didn't even finish the one I took. Why would you put noodles in lettuce? It just doesn't make sense, people. I did see that the couple at the table next to us got a salad instead. Special request? Dietary issue? 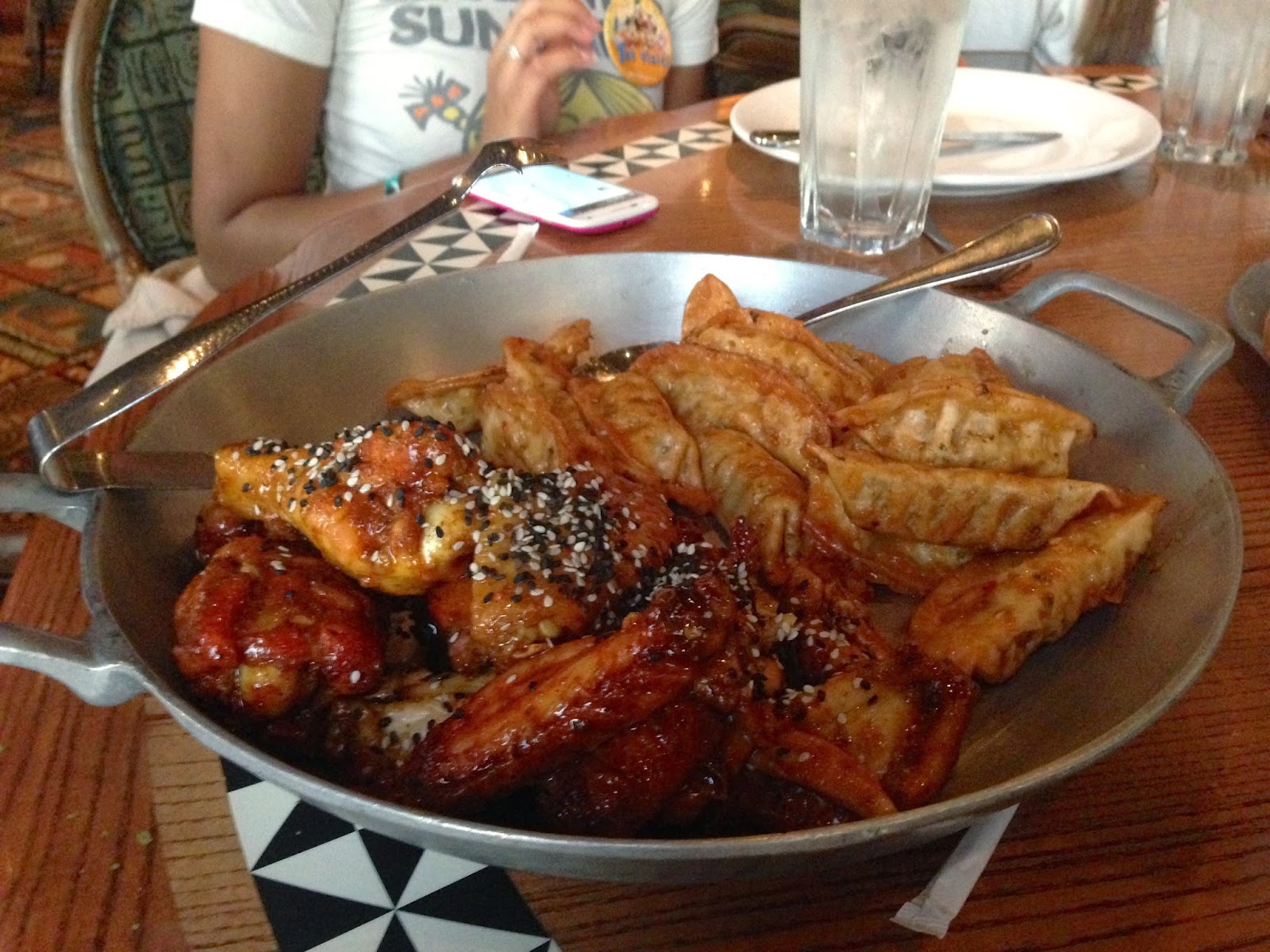 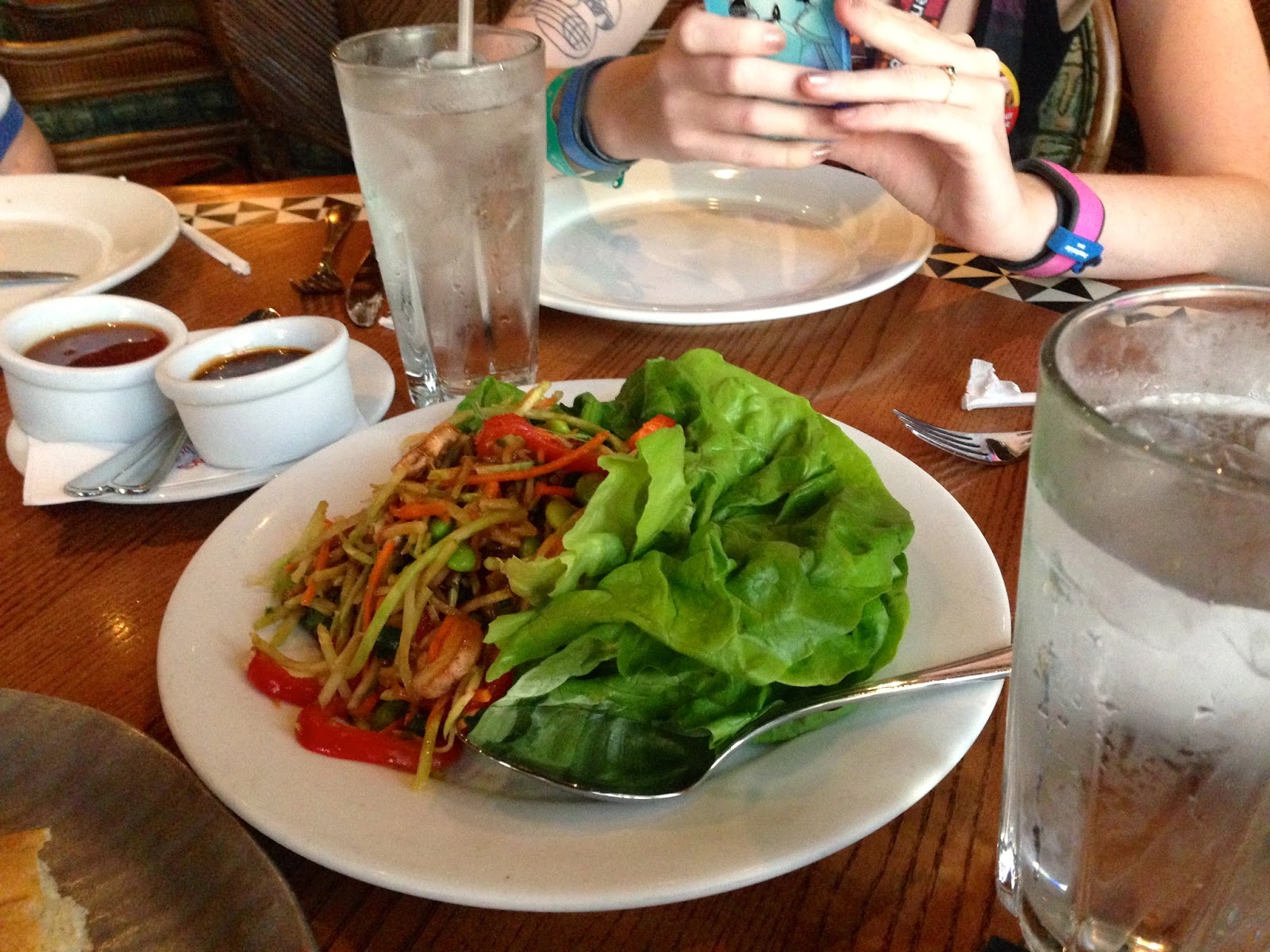 Speaking of noodles, next up were the noodles sans lettuce, as Katherine demonstrates here. Eaten as plain old noodles, they were as tasty as lo mein generally is. They were accompanied by stir fried vegetables that were nicely spiced and went a long way toward helping me pretend I was enjoying a healthy, well-balanced meal. 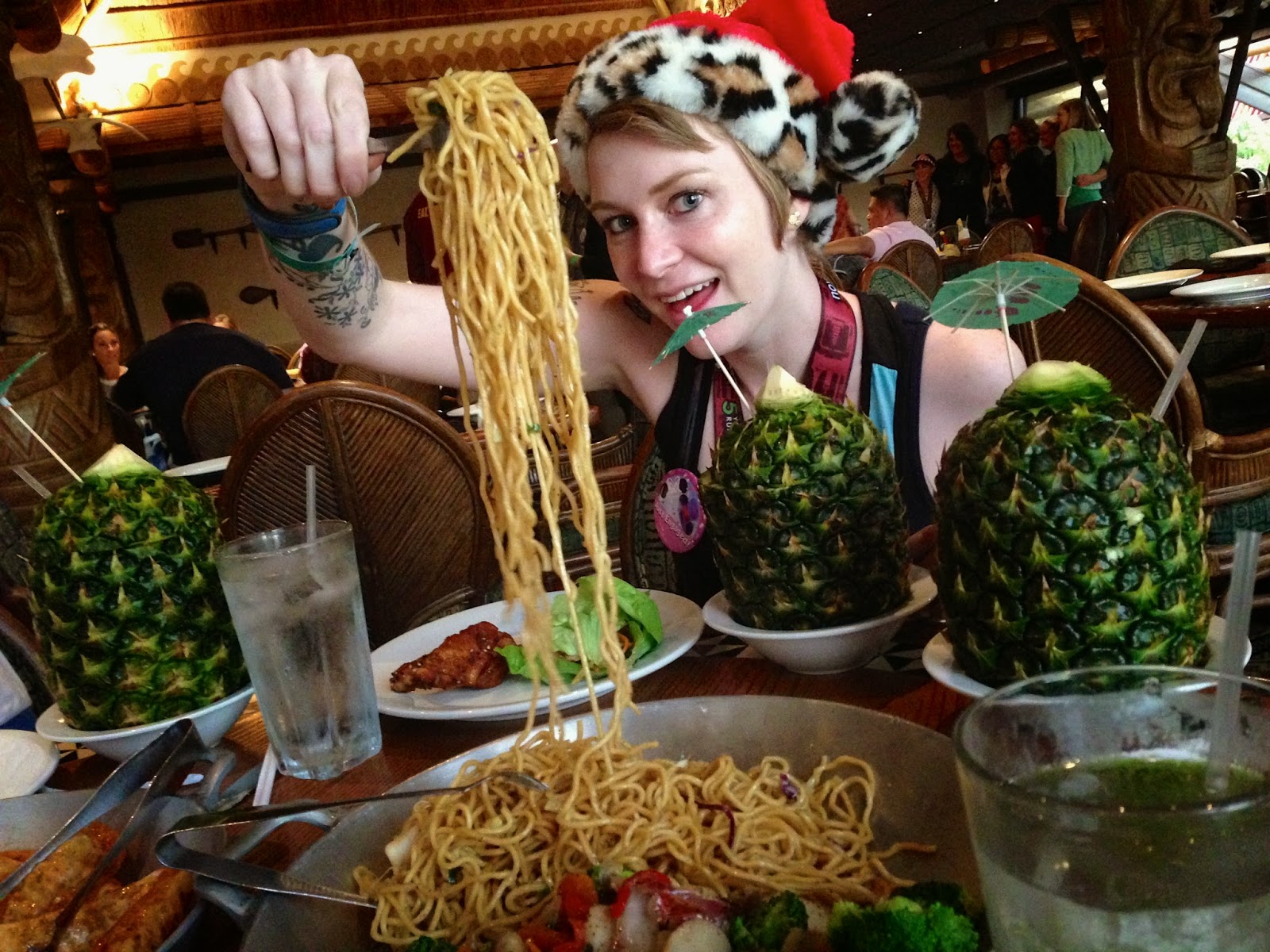 Then of course came the meat skewers, which for some reason I didn't photograph. Bad blogger! Very bad blogger! Our selections were pork, steak, and shrimp (was there chicken? I can't remember). Personally I thought the pork were best, but they were all perfectly good. The problem with 'Ohana, though, is by the time the supposed stars of the meal - these aforementioned meats, I mean - come around, my only concern is saving enough space to go to town on the DESSERT DESSERT DESSERT WHICH IS (drum roll please) 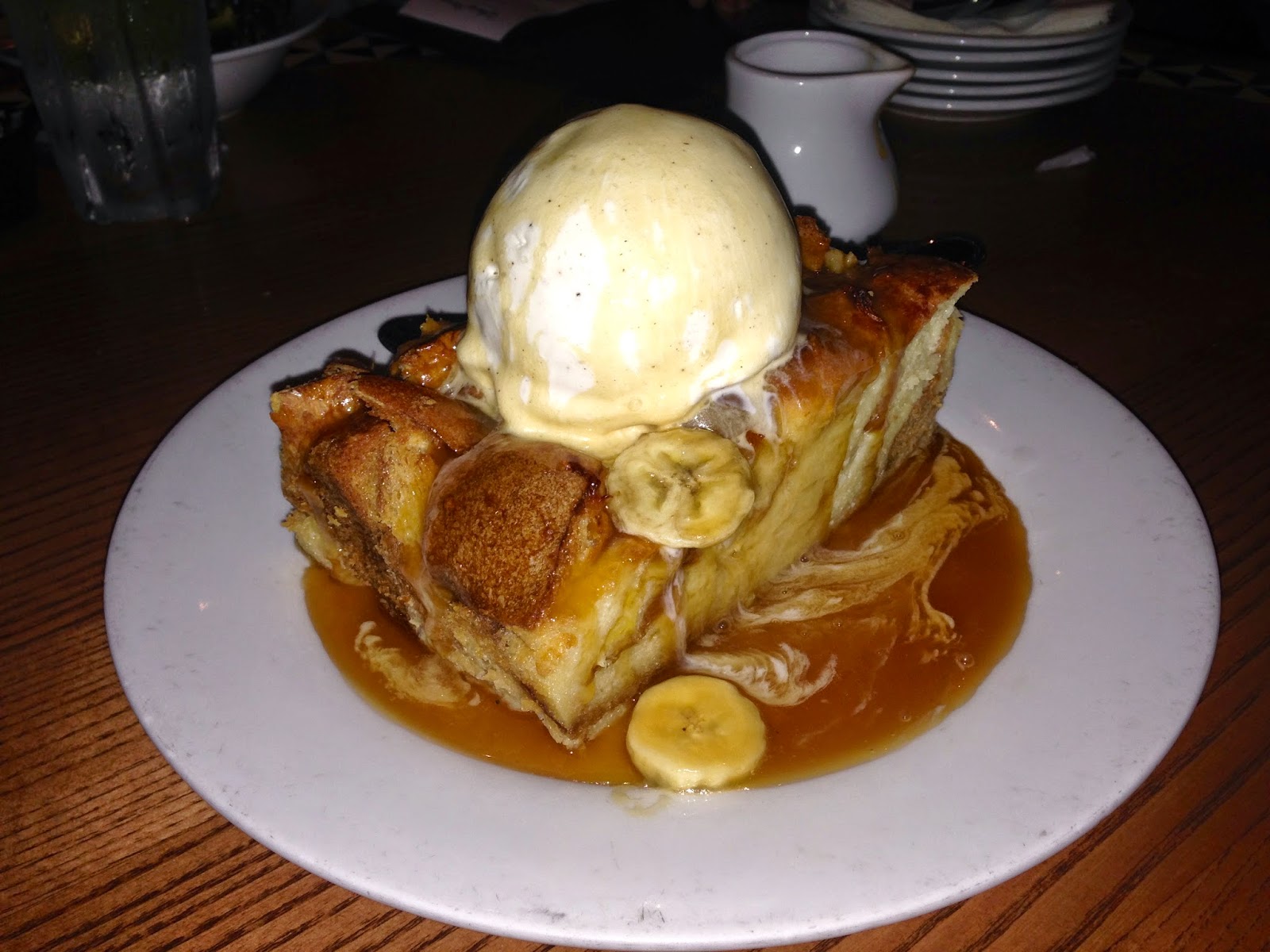 Tragically, tragically, I didn't save quite ENOUGH space, because in the ideal world I would eat the entire thing by myself. But I made a decent hole. The bread pudding with the bananas foster sauce and the vanilla ice cream... seriously, can I just buy this through Kona? I hear I can buy it through Kona. I really need to test that out. Or - and I know I always say this - if I'm ever at 'Ohana again I really WILL ask for dessert first. I mean it. I will.

Even with a Tables in Wonderland card, 'Ohana ain't cheap. And it's not SO good (minus that bread pudding) that I'd say it's worth an every-trip visit. But once in a while, with a big group of people all willing to go in on some Lapu Lapus and some silliness, it's a fun occasional splurge. I can't wait to broom some coconuts at your wedding, KRaut!

We're not quite finished with the trip report food wrap up - there's still one more to go. Strap in!