I arguably shouldn't even write this post. I didn't earn it, you see - I didn't take any pictures of the food. This is because the Sci-Fi Dine-In at Disney's Hollywood Studios is, as anyone who has ever eaten there knows, exceptionally dark, both to simulate the outdoors at night and to better view the giant screen o' ridiculous sci-fi trailers. Still, I probably should've at least attempted flash or something. Oh well.

Question about the one photo I did take: when did cars with CHAIRS become a thing? BORING. 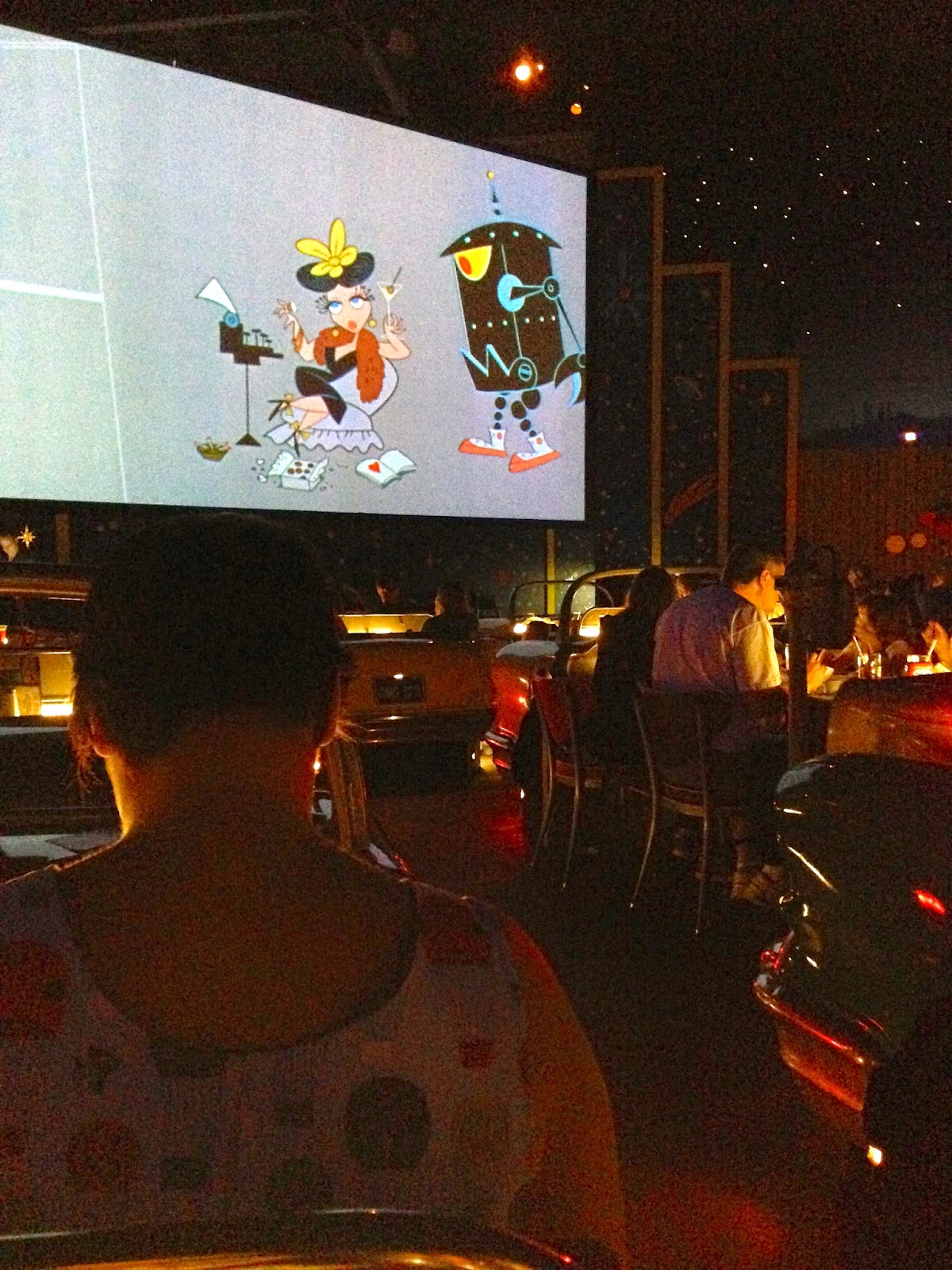 So, no food photos, but I'm forging ahead anyway because this is a restaurant that tends to interest people. Indeed, when I was a little kid (*coughtwelvecough*) I once refused to go in with the rest of my family because I was scared that the aforementioned sci-fi trailers would be frightening. Fact: unless you have a very timid child, this is not a problem. The cars remain charming and the cartoons and trailers are entertaining if you like the absurd (which I do).

As for the food, I think it often gets an unfairly bad rap. Is it haute cuisine? Not even a little bit. But it's fun in the slightly-overpriced-because-it's-Disney diner/drive-in mode.

A solid half of our group ordered milkshakes to start, and they were most excellent. I briefly considered the seasonal shake, which was pumpkin, but when the waiter informed me that there were no actual pie chunks contained therein I decided to stick with cookies and cream. Katherine even got one that boasted alcohol - spiked milkshakes are a thing here.

We also had several orders of fried pickles at our table in our car, and while I did not personally partake, they received good reviews. Extra points added for offering both fried pickle chips AND spears. So you don't have to choose!

For our entree, Katherine and I decided to split (Split Buddies 4EVA) the infamous Picnic Burger, which features a hot dog sliced lengthwise and slapped right on top of a hamburger. This was perfectly fine but a bit of a disappointment. Clearly you don't need anymore calories attached to that sucker, but without cheese it was kind of bland. Admittedly we ordered it sans kraut, but still. Oh, and in the usual Disney style it was prepared medium-well, and I'm a straight-up rare kinda girl. I'm glad I tried it but all and all I don't feel any need to repeat the experience.

This lunch occurred on the last day of the Food & Wine Festival, so we skipped dessert in favor of later heading back to Epcot for a last round of deliciousness there.

I know this review sounds somewhat lackluster, but if you ask me, Sci-Fi Dine-In is worth a periodic visit for the atmosphere alone. That and the milkshakes. Always Be Drinking A Milkshake, I say!

While we're here and talking Disney food I just wanted to mention that I've made a dent in my Disney Foods to Try list! I can now say I've had the falafel sandwich from Mr. Kamal's, the coveted Cheshire cake cup, grapefruit beer from Sommerfest, a resort-wide Mickey ganache tart, the King cupcake from Everything Pop, and the Sci-Fi Dine-In's picnic burger. We just covered that last one, and you can check out my thoughts on the rest by reading my trip report. Hooray for progress!

And that's game! Here ends the November 2014 trip report. Sadness. But I'll be back in January, so: happiness! Thanks to all who followed along. I hope to see you in the parks soon!