Thanks to a much improved bus situation during the 10K, I got back to the room a good twenty minutes early than the day previous. And since I wasn't quite so DEATHLY COLD, I didn't take a forever-long shower, either (although let me say here that the max heat in the POR showers needs to be increased). It still took a bit of time to cajole Pat into getting out of bed - the man is no morning person - and we still had to make a coffee stop in the food court, but we managed to make it into Epcot around 9:30AM.

Brief note here because I'm not sure where else to put it: the South Depot bus stop in POR had a video monitor showing approximate bus arrival times. This is the only place I recall seeing such a thing. I like the idea but it didn't prove to be entirely accurate - on this occasion, for example, the Epcot bus arrived very early, which was nice for us under the circumstances but not, y'know, correct. I hope they do work the kinks out and install them everywhere the bus system runs because I think even knowing you had a 20 minute wait ahead of you is better than the uncertainty of the current Disney bus crap shoot.

Anyway! We had actually made it to the parks earlier than I expected, so we still had awhile to wait for our first FP+. Rather than perform said waiting, however, I went ahead and swapped it for an earlier slot. There remained some time to kill, but less!

To murder that time, we wandered over to Test Track and deemed the 30 minute posted wait time manageable. Once inside the design lab, Pat proceeded to design a truly ridiculous... truck... thing... which would've been even crazier if he hadn't run out of time selecting paint jobs and other extras. Just know that the below WOULD have been covered in a delightful star pattern if we had our way. 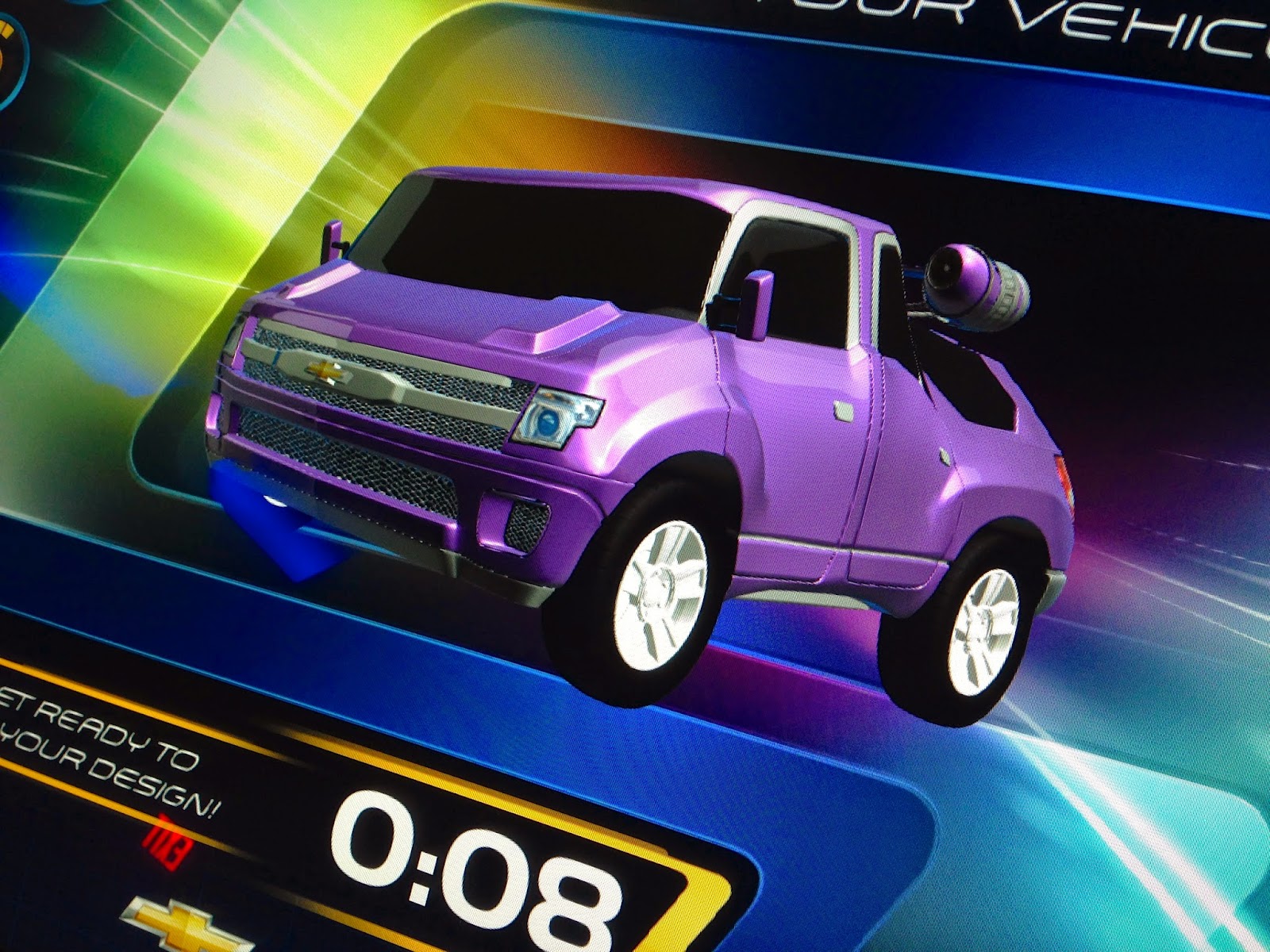 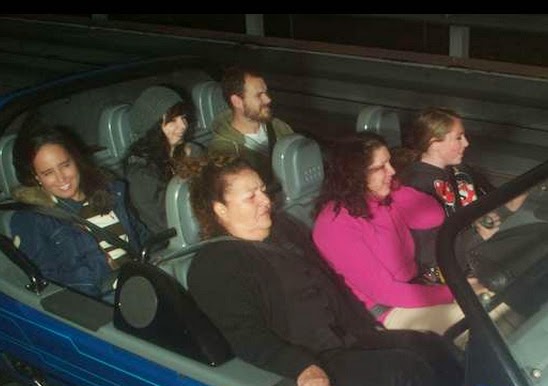 From there we headed over to Mission: Space to cash in our first FP+ of the day. Naturally we went with the Orange Team, because we are More Intense. I was even super nice and switched positions with Pat so that he could take on my beloved pilot role. Totally worth it, because he really liked this one - the experience, the many warnings that maybe you shouldn't experience the experience, and the fact that Gary Sinise's forehead never moves.

On our way out, we paused briefly to take in a Jammitors performance before heading to the Fountain View Starbucks for snacks and coffee. We took our coffees over to Innoventions in the hopes of designing our own coaster in Sum of All Thrills; we were so invested in this plan, we were even prepared to endure the posted 40 minute wait time. Sadly, though, we were turned away by a cast member who said we couldn't bring food or drinks into the queue. "But the wait time is 40 minutes," we said. "By the time 40 minutes has passed, we will have easily finished our coffees." Alas, he wouldn't budge on the matter, so we were forced to move on.

Ah well, our Soarin' FP+ was approaching anyway. We wandered over to the Land pavilion, chucked our now-empty coffee cups, hit the bathroom, and got in line for Living with the Land. "Line." They hadn't even posted a farcical 5-minute wait time - the sign read 0. Truth in advertising!

Post-greenhouse boat trip landed us just ahead of our FP+ time slot. Time for an experiment. Earlier we had overheard one cast member explaining to another that FP+ times are good not only up to 15 minutes after they close but five minutes before they open, too. Intriguing! We tested this theory and found it to be good, although we couldn't entirely understand why. The 15-minutes-late buffer makes sense for those who might be caught in traffic or stuck on another ride or what have you, but if you're early why can't you just wait those additional five minutes?

What I'm getting at here is: we rode Soarin' and it was fun. Oh, and at one point while we were being sorted one of the cast members said "You'll hear shortly from your flight attendant Patrick." I forgot that the flight attendant in the pre-show is named Patrick! So I told Pat to please go ahead. He recommended that everyone not buckle their seat belt and flail their arms around while in the air; keep that in mind next time you're boarding your glider.

Speaking of early, we decided to be so for Pat's sole non-ride related request of the trip, our Coral Reef ADR. About 30 minutes early, in fact. Not only did they let us in shortly after our arrival, we got our requested tankside seat. Success! I've reviewed this restaurant before and my assessment hasn't changed, so I'm not going to do a food post on the experience, but it remains a pleasant way to pass the time. Unremarkable meals, excellent ambiance. We got some great photos of the spotted eagle ray and one or two of the shark. 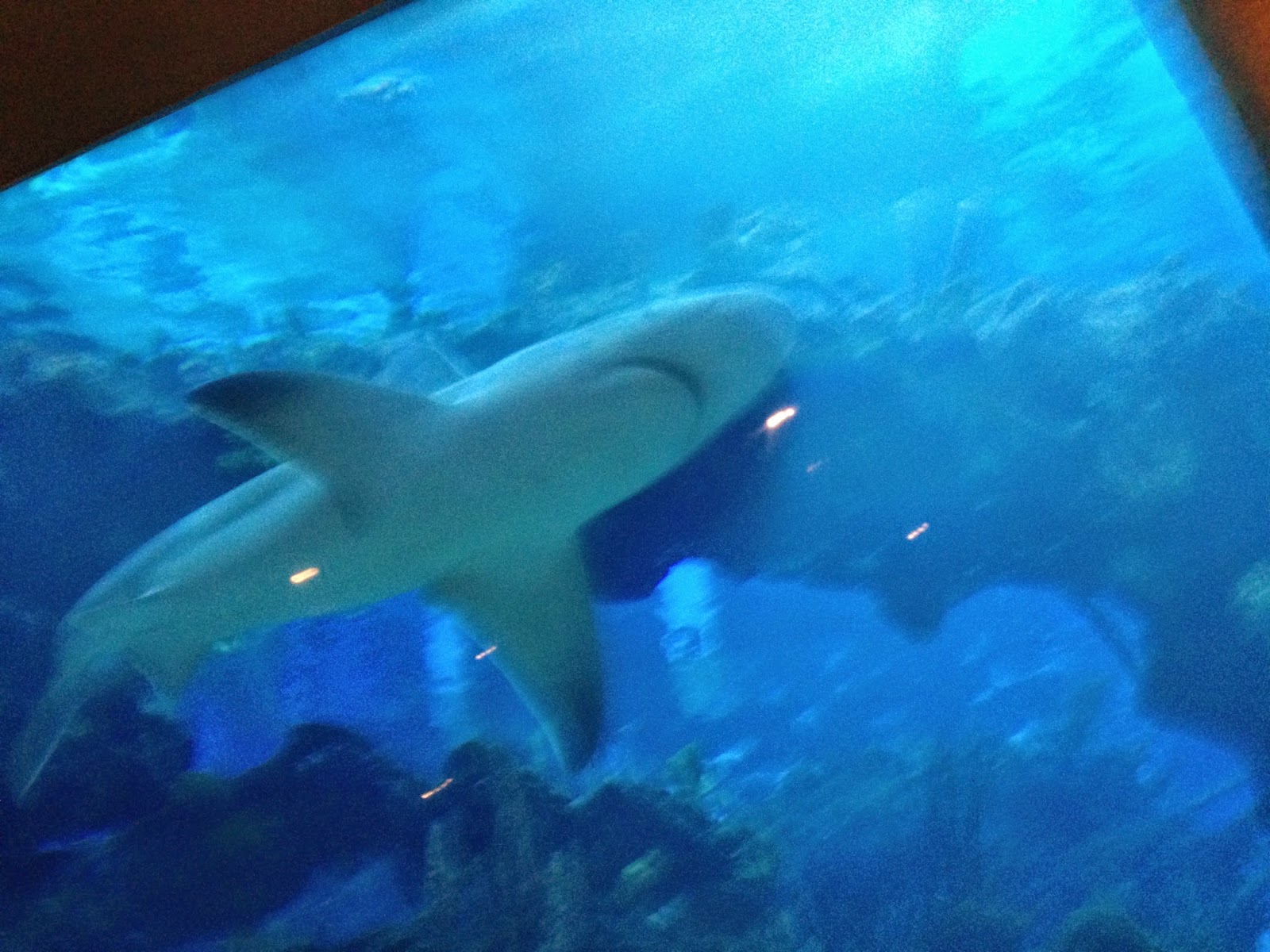 Next up: our FP+ for Spaceship Earth. Rome burned as per usual, and Pat very much enjoyed some technology that Judi Dench happens to know about. 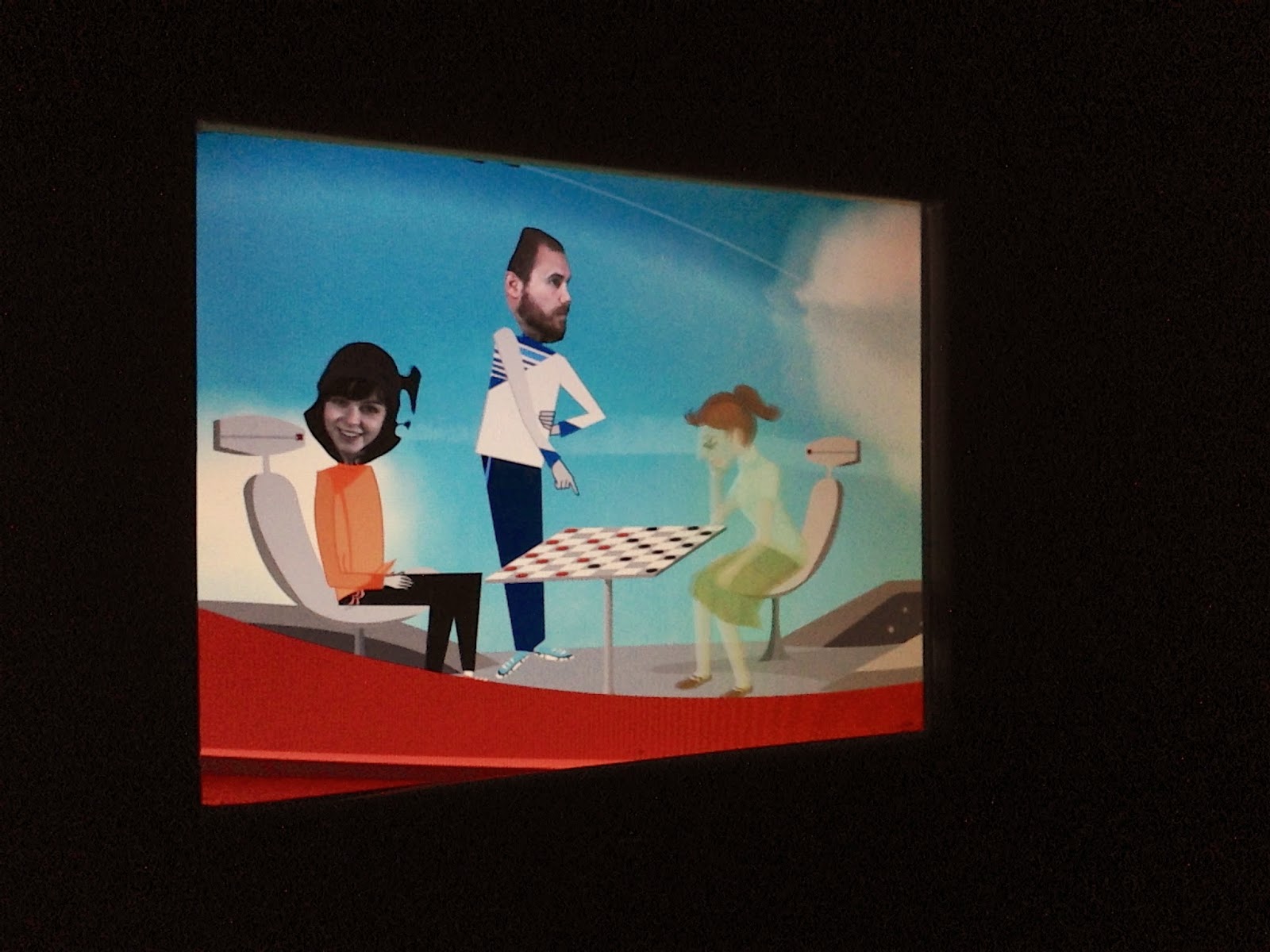 That closed out our FPs and our plans for Epcot; we hopped the monorail to the TTA and then grabbed the express to the Magic Kingdom. Since it dumps you out on the end of Main Street anyway, we took the route through the Emporium to check for the Animal t-shirt. This did not appear, but Pat did find some acceptable pajama pants.

First things first: a stop at the Tomorrowland FP+ kiosk. The pickings were slim, but we did manage to snag a Haunted Mansion time. All this activity whet our appetites, so next we stopped in at the Confectionery where we were dismayed to locate exactly zero packages of Goofy sour gummy worms. We soothed our disappointed souls with some jelly beans but it wasn't quite the same.

Being optimistic creatures, we decided to swing through Tomorrowland next, just to see, you know? And indeed, I happened to notice that Autopia had a posted 10 minute wait - a little low for that attraction. It occurred to me that this was likely caused by the afternoon parade, so we hustled back to Space Mountain to see if it had been similarly affected. We were left frowning at a 40 minute wait time... that magically changed to 25 right before our eyes. Ta da! We hopped in line at rode the left track in the back this time, and unanimously agreed that a) the left track is better than the right and b) back is better than front. Discuss.


Our Haunted Mansion FP+ opened up, so we hopped in line for that and chatted about our dinner plans. I suggested we grab an early dinner at a monorail resort, and as Pat has fond memories of the Contemporary we settled on the Wave. The only ADR available on the website was for 6:55PM, far later than we wanted, but we decided to take it anyway, show up early, and see what happened.

We paid our visit to the grim grinning ghosts, we pondered a stop in the Hall of Presidents, but wanted to get another FP+ beforehand. After some wandering about lost, we finally located a FP+ kiosk (why does it seem like they're trying to hide some of these?). Nothing exciting popped up, but we did grab a Jungle Cruise FP+.

All that lost-getting rendered us too late for Hall of Presidents, so we wandered around the Christmas shop for a bit before using our FP+. Our skipper was pretty good, both in delivery and personalization of the spiel. The ride was still labeled and partially decorated for the Jingle Cruise, but aside from one half-hearted crack there was no mention of the holiday. Favorite original skipper joke: "You probably think the elephant's trunk is full of water. But it's not." (Say it out loud!)

This ended our Magic Kingdom needs for the day. Aside from a quick photo stop, of course. 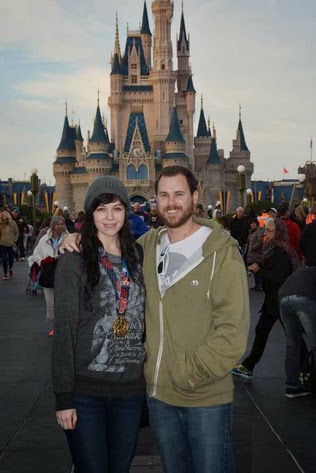 Then: dinner time! We took the walkway to the Contemporary and I marched right up to the Wave podium; Pat grabbed seats at the bar just in case they couldn't seat us early. No need - they could and they did. I'll review the meal in greater detail later, but in short: really good!

After a quick exploratory spin through the gift shops, we took the path back to the bus stops and jumped onto the waiting bus. Back at the resort we checked the general store for gummy worms, but they were out too! This was our first inkling of a growing epidemic.

We passed a screening of Meet the Robinsons on the lawn as we traveled back to our room, but it was so chilly very few families were partaking. Even if it had been balmy, though, I had no time for such trivialities - it was time to get ready for ANOTHER race.

I put my stuff for the next morning together while Pat tried on his new pajama pants, declared them to be cut weirdly in the crotch, and went down to the gift shop to exchange them for something else. Despite having tossed his receipt, they were perfectly nice about giving him a pair in a different size and style, so that worked out fine.

And then, after setting my usual several thousand alarms, I drifted off to sleep to the familiar sound of Pat working on his laptop. To paraphrase Li Shang: Tomorrow, the real work began...

Next up: The WDW Half Marathon!