So... funny story about this post. I had almost the whole thing written, went in later in the evening to finish it, and somehow - I'm still not entirely sure how - I pressed buttons that deleted the whole thing and wouldn't let me undo. I REALLY DON'T UNDERSTAND HOW IT HAPPENED. But internet research advises me to, ahem, let it go, so this is written from memory. Luckily I only just wrote the original, so it's fairly fresh, but if it's a little more disjointed and/or vague than usual, apologies!

Back to the trip report itself. I got back from the half around 9:15AM, which was considerably earlier than I had originally expected. This gave me time to not only take a shower but also a brief nap while Pat got some work done.

Eventually we got it together, hit up the food court for coffee, and hopped on the bus for the Animal Kingdom. By the time of our arrival our first FP+ had already opened, but we still took a moment to admire than kangaroos before heading to Kilimanjaro Safaris. It was a little late in the morning for very active animals, but it was still a good experience. Highlight: a Watusi cattle scratching her hindquarters with one of her horns and making a truly doofy face in her ecstasy. I'm super sad I was on the wrong side of the truck for a proper photograph. 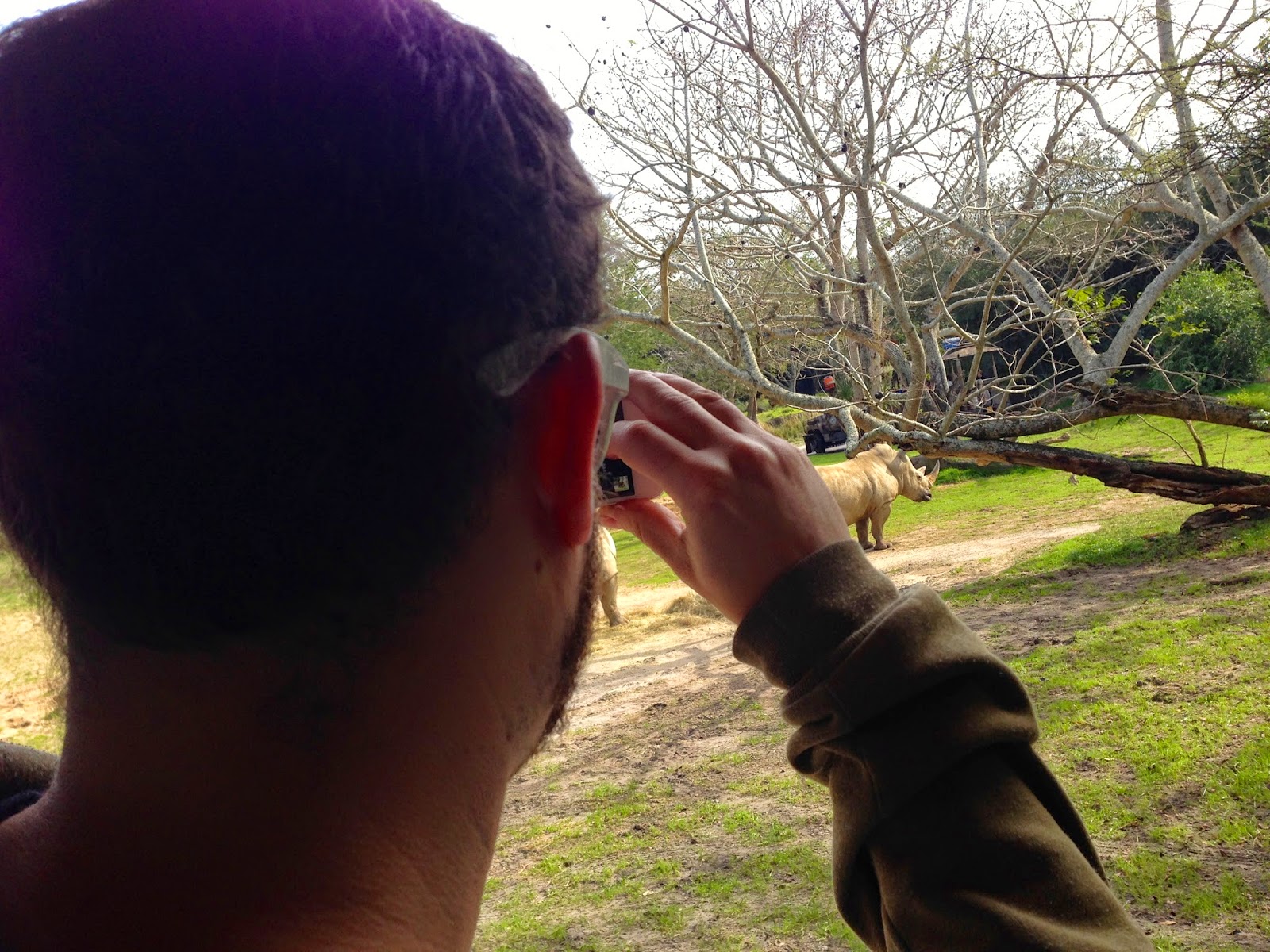 Snack time! On our last trip to the Kusafiri bakery, what Pat had really wanted was a paw print brownie, but they were out. It was time to rectify that situation. I was pretty post-race hungry and the paw print brownie was on to-eat list, so I ordered one too. We took our treats on a quest to find seating, eventually finding a table on the path between Africa and Asia. More on this later. Spoiler alert: YESSSS.

Our Expedition Everest FP+ slot was now open, so we, y'know, did that. And the bird of prey was back! I am seriously so confused on this subject. 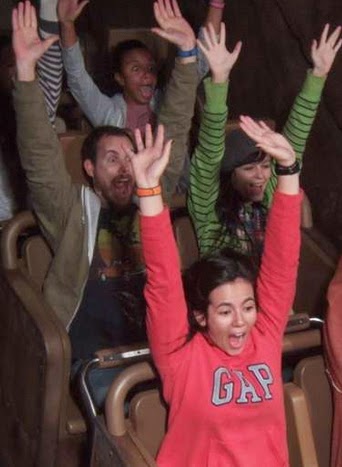 Then it was back to Africa for Festival of the Lion King. On the way we got distracted by a drummer and sitar player setting up on the stage where the Indian deejay and dancers usually perform. We watched the sitarist (spell-check says that's right!) tune until a guy came up and announced that they were just sound checking; the performance wouldn't be for another half hour or so.

Which is how we wound up power-walking to New Harambe, jumping into the FotLK FP+ line with a mere five minutes to spare. Naturally we did not have first pick of seats, but I managed to find us a spot with clear sight lines on the end of the warthog section. I feel like this location didn't garner the same kind of audience interaction that being in lion or elephant does, but we had a magnificent view, and that's what counts. 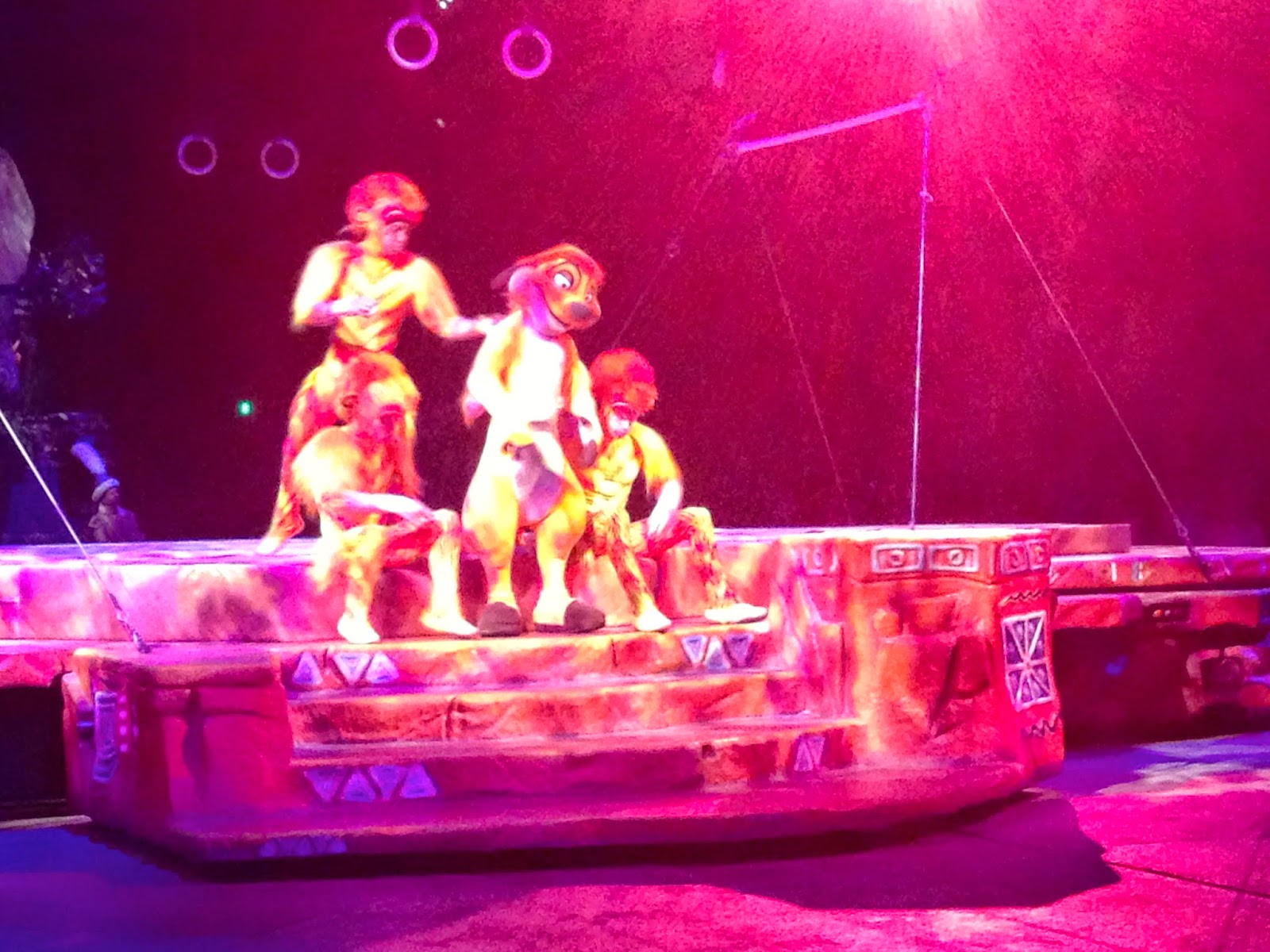 Fun fact: Pat spent about a decade practicing high-level gymnastics. He says he thinks it's sad that the only job gymnasts can get post-career is as a tumble monkey. Also he hates their costumes. So there you go.

That about wrapped up our Animal Kingdom-oriented goals for the day, and we headed over to the bus stop to move on to the Studios. We were not the only ones with this plan - a huge line awaited us. We managed to get onto the second bus to arrive and found ourselves in the Studios a short time after.

Our first act - now and for as long as FP+ is in operation, I imagine - was to find a FP+ kiosk; we found one at the end of the boulevard, AND we managed to find a miracle RnR slot for mid-afternoon. Somebody must have JUST cancelled it.

Next up was a ride on Star Tours, which predictably had a very short wait. I can't remember where we went, but happily they were places we hadn't gone before. I want to say Boba Fett was in the second one, and the first one... was... um... something...

Since we were nearby, we ducked into the Muppet Stuff store to see if they had restocked the Animal shirt Pat liked. Unfortunately they had not, and he decided to just go ahead and buy his second favorite. He later decided he liked it even better, so that worked out well.

We were getting pretty hungry again, so we decided to be brave and try the specialty hot dogs from Fairfax Fare. I'll do a full review later, but I want to highlight an exchange I had here. I asked for my hot dog without the chips, as I didn't want them. "I can't do that," said the cashier. "Yes you can; I do it a lot," I said, because YES YOU CAN I DO IT A LOT. I did it at Columbia Harbour House two days previous. I've done it countless times over many trips. It's TOTALLY A THING. And yet the cashier looked at me blankly and said, "It's not coming up." And as I took in her expression, I realized: it was the exact same cast member who had refused me an egg sandwich at 10:31AM in November. Why does she hate me??? I took her stupid chips, but I NEVER ATE THEM. Ha!

But things were about to look up. We took our tray into the seating area but had some trouble location a table. There was a guy eating by himself who randomly suggested that we share with him. We plunked out tray down and proceeded to chat with him while we ate. Turned out he was a retired military guy who enjoyed touring Florida's parks in his free time. He finished his food first, we thanked him for his table and company, and he wandered off.

Only to return 30 seconds later with a stack of paper FastPasses, the kind good for any ride in the designated park until the end of the month. "Here, you can use these," he said, and we hardly had time to thank him before he skittered off again. Suddenly our options had increased considerably! 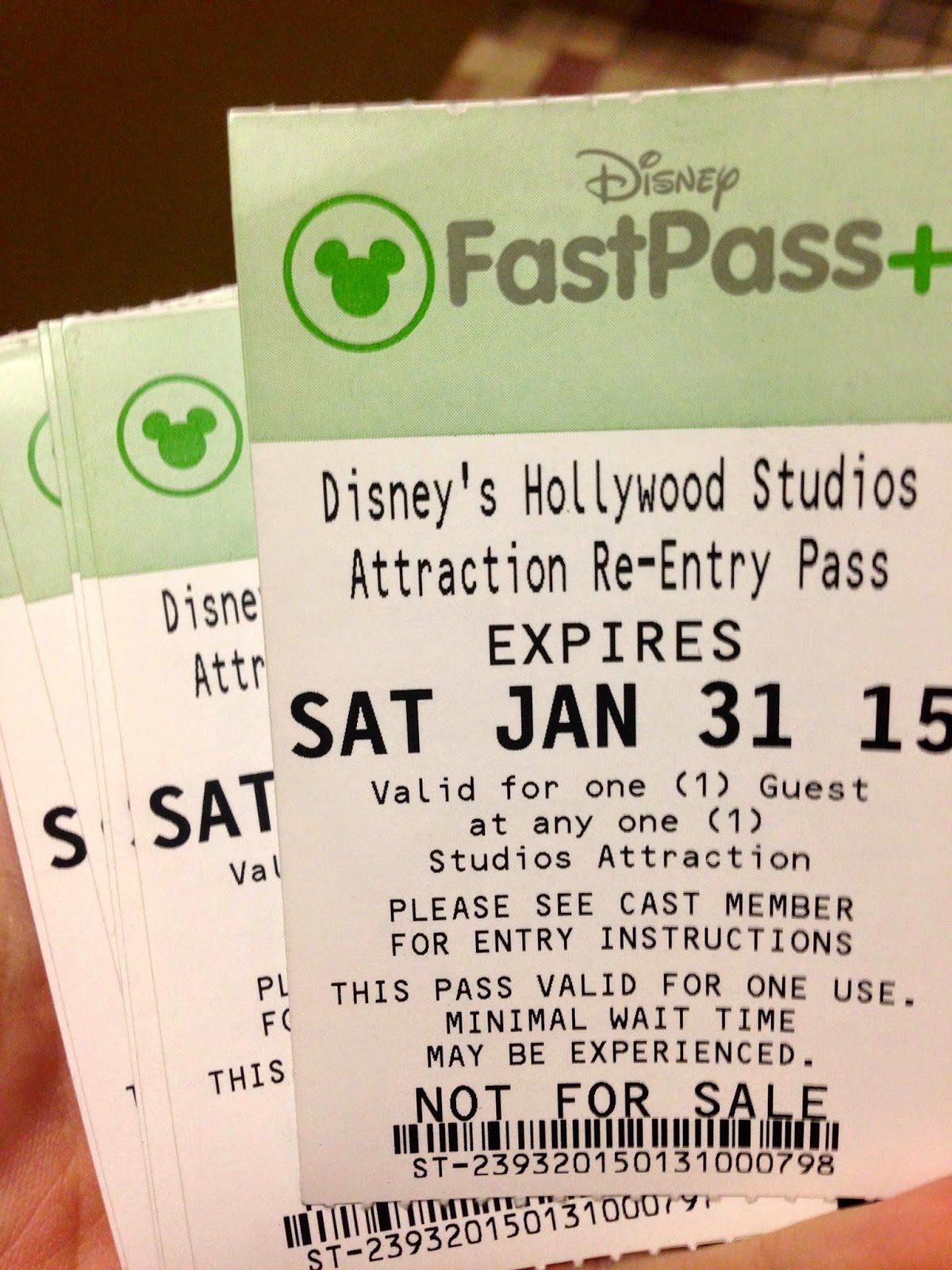 Pat wanted to use a pair immediately on Tower of Terror, but I needed time to mentally prepare. I reminded him that the Indiana Jones Epic Stunt Spectacular started soon, and hadn't he said he wanted to see that? Yes, he had! So we went over to the Indy stadium.

The show was unexpectedly weird. Well, mostly it was normal. I liked that the planted stunt guy was from Morocco, as it made it less obvious that he was a plant. Pat enjoyed the tumbling passes of the bad guys. But the cut the show off early, ending with the truck catching on fire. The entire plane scene was cut. I overheard someone asking a cast member about it, but the response was completely rote; something about how, oh, sometimes the show changes. You don't say! I wonder what was up?

Our Rock 'n Roller Coaster FP+ time had opened up, so we paid another visit to Mr. Tyler before running right back to the FP+ kiosk and getting a slot for Fantasmic. 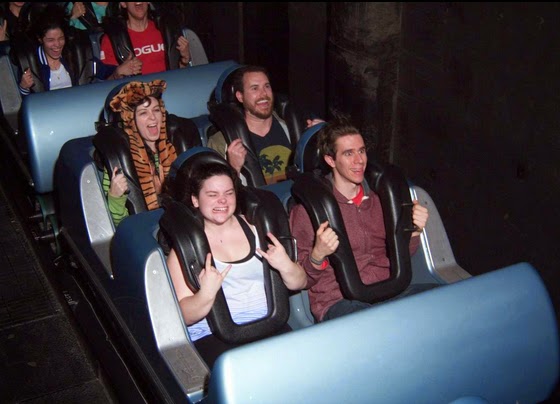 Then we - sigh - used two paper FastPasses for Tower of Terror. I was LESS anxiety ridden than last time, but it was STILL NERVE-WRACKING. Quit randomizing the drops, computer! How can I brace properly otherwise?! 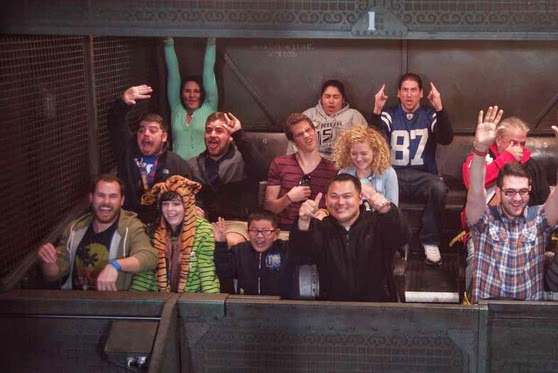 We had time for one more quick ride on Star Tours before Fantasmic. Important note: as you may have observed, the decreasing temperature of early evening had driven me to switch out my usual gray beanie for my tiger hat. Whoever operated Star Tours must have liked it, because... I WAS THE REBEL SPY. "EEEE!" exclaimed Pat and I as my face came up on the screen. "Hey, that's you!" said the guy on the other side of me. AND IT WAS ME. I am kicking myself hard for not buying the shirt. I may need to consult ebay regarding this problem.


It was time for our Fantasmic FP+, and we joined the hordes of people shuffling into the amphitheater. The cast members tried to herd is down to the far end, but this displeased me as I wanted us near the exit for a speedy getaway. We saw that another section in that area had just opened up, so we doubled back and took a spot closed to the top and on the end of the bleachers. (Incidentally: Architect Pat says the lack of exits at both ends is a major design flaw. I am inclined to agree.)

The pre-show consisted of various Disney quiz-show questions directed to members of the audience (the front-and-center ones, anyway). My favorite was the little boy who was asked to complete a line from "Kiss the Girl" and had NO idea what he was hearing.

Fantasmic was good as always, but we popped out of our seats and headed to the exit the second it ended. This was the only way to ensure we didn't get caught in a ginormous crowd. We managed to get out ahead and hopped in a bus back to the resort in decent time.

We hadn't had dinner yet, so before retiring for the night we stopped by the food court for make-your-own pasta. As far as I could tell this is exactly the same as the station at Landscape of Flavors at Art of Animation. I don't think it warrants a review, but it was fine and the cheese on top was a nice touch. 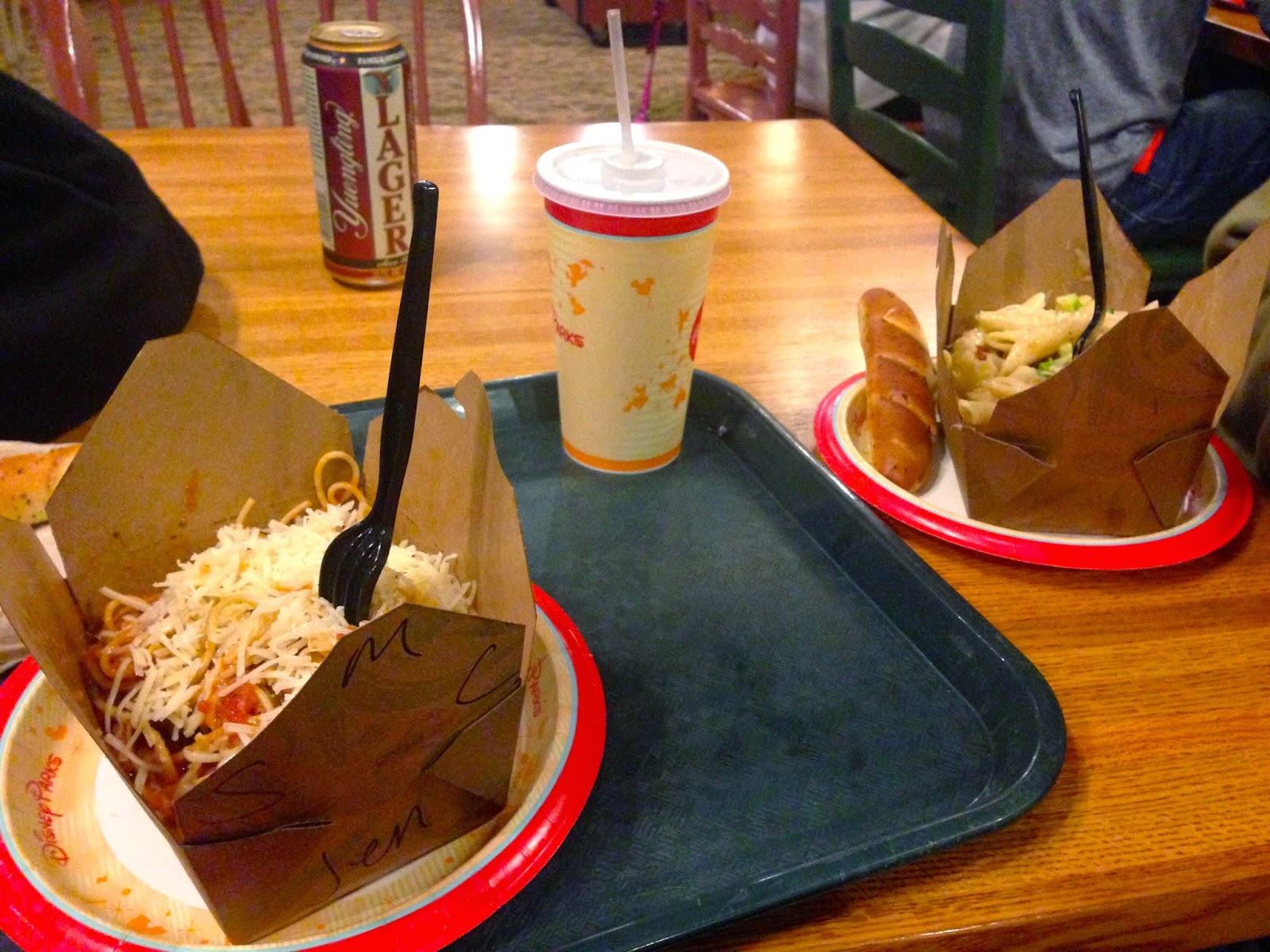 Thus fed, it was time for our nightly ritual: I prepped for the race and went to sleep in Pat's hoodie; Pat worked. One more early morning wake up call...

Up next: THE MARATHON.