We got back from the marathon around 12:30PM, and I immediately hopped in the shower while Pat got right back to work on his project (stupid jobs always giving people projects!). I threw on a sweatshirt and some shorts and we walked over to main building to get some lunch.

My initial desire was to hit the River Roost bar or maybe even Boatwright's, but those sadly didn't open until later in the day. It was the food court for us, where we purchased such highfalutin' meals as a Cajun chicken sandwich (eh) and chicken nuggets (yum!). I saw a bunch of people wearing their medals and kind of wished I'd brought mine, but there would be plenty of time for that later.

But first: A NAP. A glorious two-hour nap, which was longer than I had originally planned but I was just so warm and comfy. And anyway the more work Pat got done then the easier it would be to convince him to see all the fireworks shows and things I had planned. Strategy! This did, however, mean I had to do some FP+ shuffling, but that was okay.

My plan for the day was the Magic Kingdom; we briefly pondered going to Epcot instead but ultimately decided to stick with the agenda so as to take advantage of the evening's Extra Magic Hours. I actually felt pretty okay, physically speaking, better than after the half, even.

By the time we arrived it was already around 4PM, but we had until 11PM to play. The security guard who searched my bag admired my Dopey medal and informed me that if he got one of those car stickers, it would say 0.02. I also exchanged nods with a fellow Dopey runner; Pat noted that the running community might be the most supportive sporting group he's ever seen.

We went directly to our first FP+ slot, Buzz Lightyear's Space Ranger Spin. Pat and I are both gamers but I mostly do it for story whereas Pat is actually, y'know, GOOD at it. Therefore I was positively shocked when I WON between the two of us! But let's be honest, it was almost certainly luck - given the way the laser guns are attached to the cars, it's super tough to tell where you're aiming, especially if it's your first ride-through. Pat was in definite agreement that the guns suck. 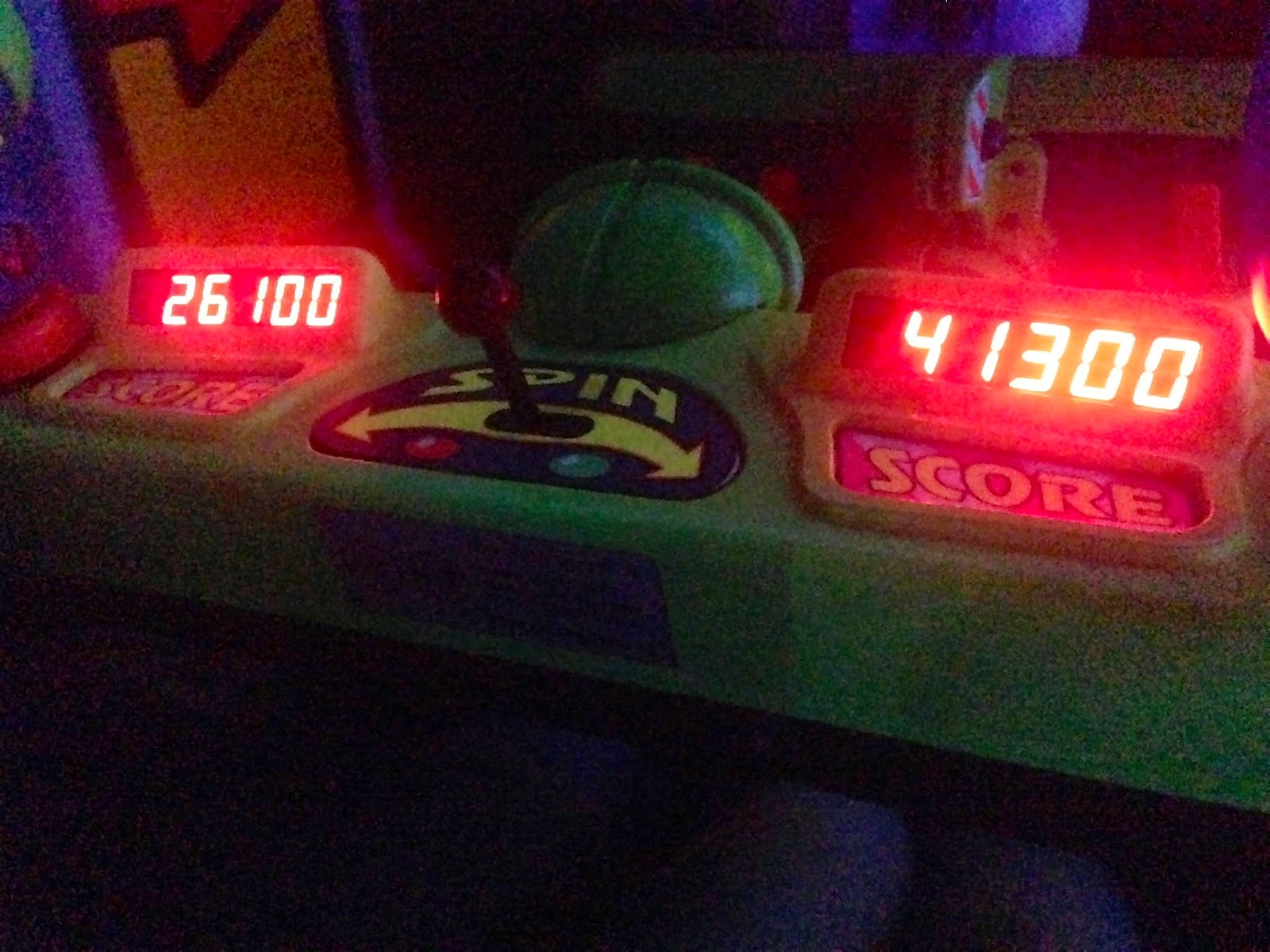 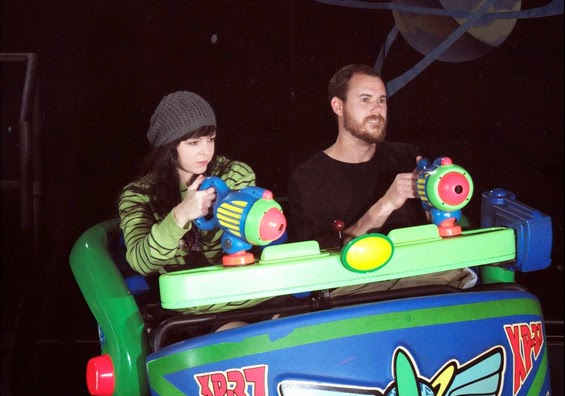 Since we were there, we took a relaxing ride on the PeopleMover to kill time before our next FP+ for the Haunted Mansion, which we rode right after. Pat really enjoyed the "no dancing" signs in the Doom Buggies. 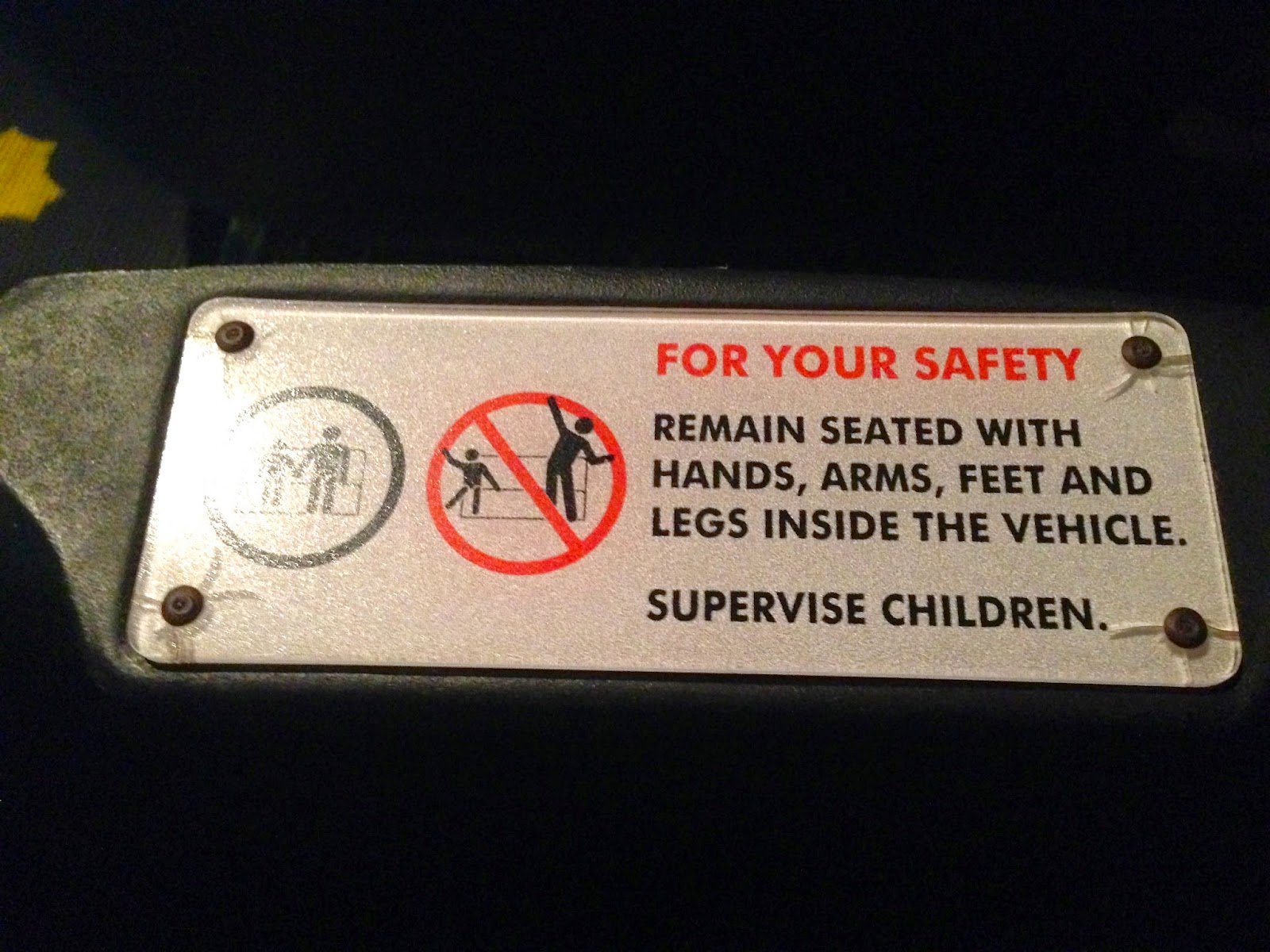 And then I just realized that I completely left off a whole chunk of time in my notes. CRUD. Let's see... what did we do after the Haunted Mansion? I know we had a FP+ for Peter Pan's Flight which we rode; what Pat mostly took away from this ride was that his new goal in life is to don a Godzilla costume and stomp around in a miniaturized world. I must admit, as much as the destruction would pain me, I would laugh.

Oh, oh! I remember now what we did before that! We rode it's a small world! Which Pat does not hate! And his dad loves! There we go. I may be missing some things still, but at least it's not as giant a gap.

Anyway. After all of that stuff went down we found a FP+ kiosk by Mickey's Philharmagic and, after some frustrating queue vagueness, we got to a machine and found... nothing, really. We picked up right-now FP+s for the Teacups, which had no line so that didn't help us much. But we rode it anyway - my first time since, I don't know, 2008? 2009? - and it's surprisingly fun when someone with superhuman upper body strength is doing the spinning. 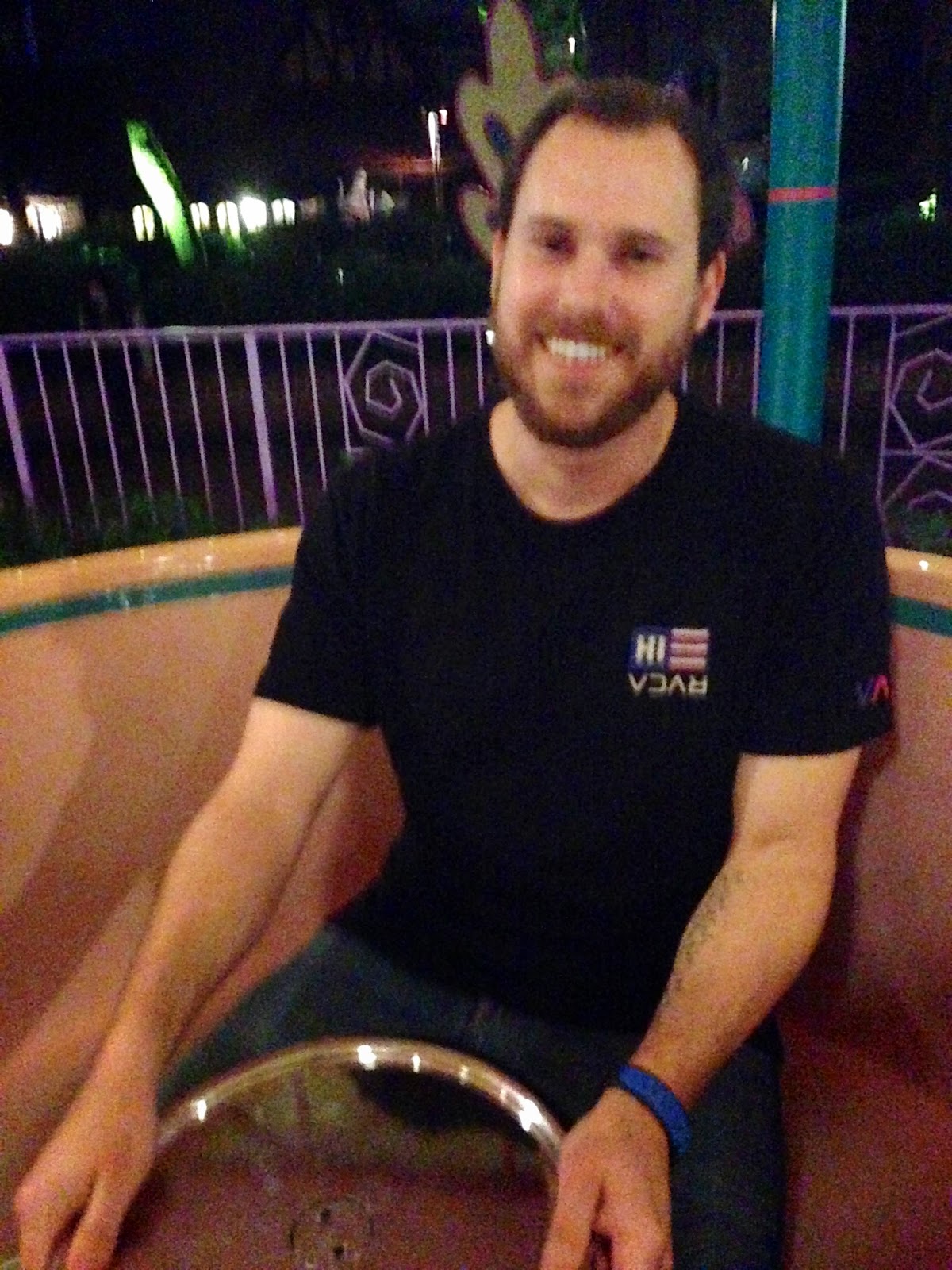 We went straight back to the kiosk to see if anything new had opened up, but it had not. We took some Jungle Cruise FP+s anyway but didn't end up using them. This still makes me feel faintly guilty but there's something about the new system that makes you feel like if you don't have a FP+ on standby you're not doing it right, you know? I'm really not sure how to solve this problem. Thoughts?

By that point it was about time to start looking for a good spot to watch the parade. We started moving toward Main Street/the hub to see if we could squeeze in there, but wound up locating such a great vantage point in Liberty Square that we just hunkered down there. We were right up at the front and could sit and watch it and everything!

While we waited, Pat grabbed water and a snack from the produce stand behind us, and we chatted with a lady who had just run her first marathon until the Main Street Electrical Parade came by. I LOVE MSEP, but sometimes I kinda wish they'd swap in Spetromagic again, just for a little while... 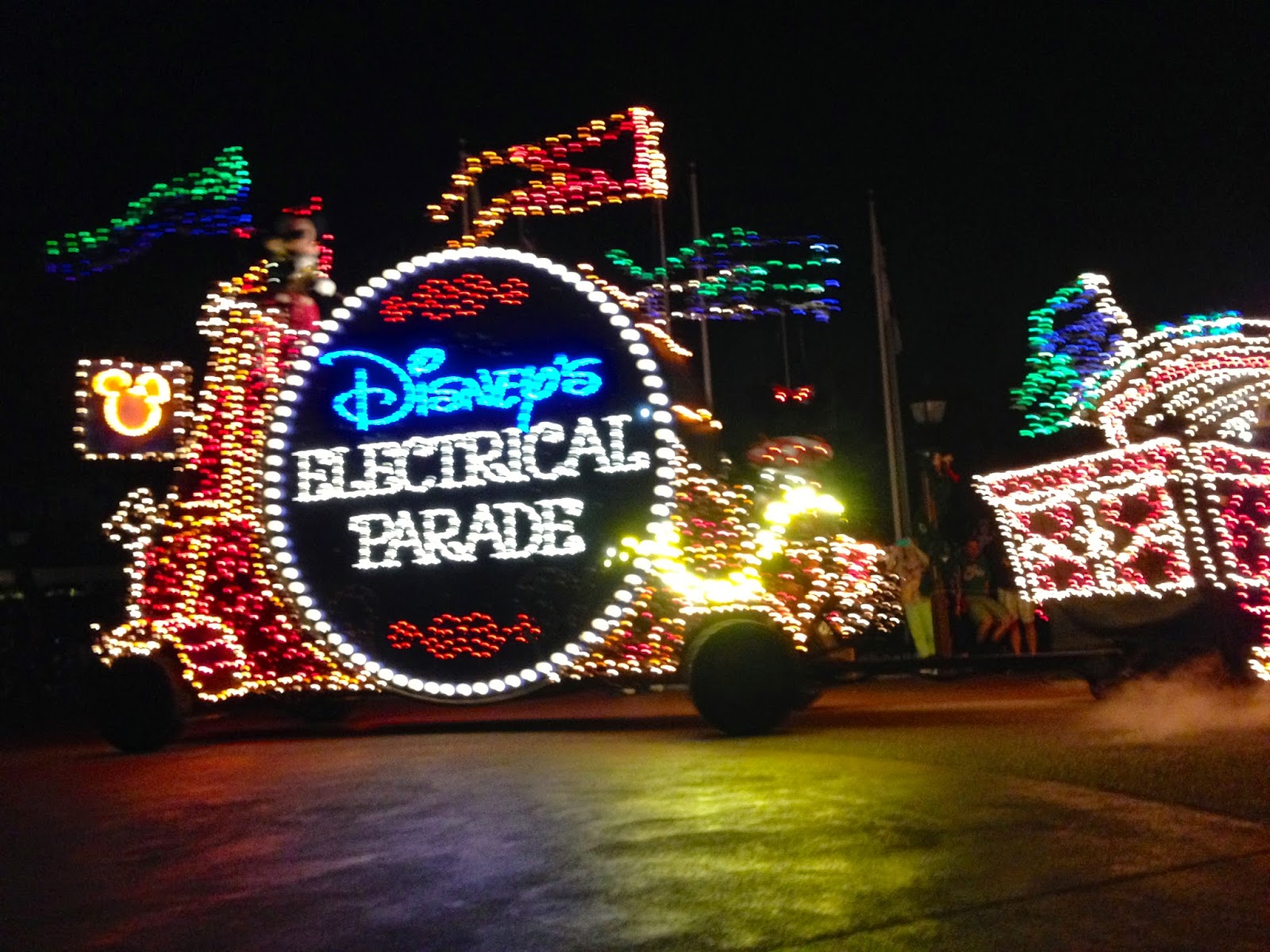 And now for the unicorn of WDW trips: A Plan That Actually Pans Out. I determined that the best thing to do, fireworks-wise, would be to find a viewing spot on the bridge to Tomorrowland; the moment the display ended, we would book to Space Mountain and arrive before the EMH hoards - AND THAT WAS WHAT WE DID. Incidentally, Pat thought the fact that Tinker Bell's role during the fireworks is usually played by a guy was pretty funny. Again: upper body strength. He'd be a natural! 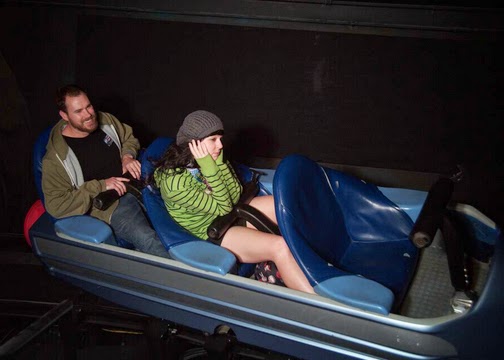 After our ride on Space Mountain, we sat on a bench and discussed our plans for the remainder of the week. Basically, we scrapped them. No, no, that's melodramatic. But we made a lot of changes, the most immediate of which was that this would be the last of our time spent in the Magic Kingdom. The only thing Pat still wanted to do was Big Thunder one more time, so we made our way over to Frontierland just as rain began to fall.

It stopped as we approached the ride - and then, to our dismay, it had started again upon our turn on the coaster. It was kind of like getting smacked in the face with a million bees. Not stung, mind you, just smacked. I wish BTMRR had photos so we could see the ridiculousness that ensued!

It was raining kinda hard off and on by then, so we decided to take a final few photos on Main Street and then get out. The line for POR was pretty long but the buses kept coming quickly thanks to our awesome and encouraging bus cast member. 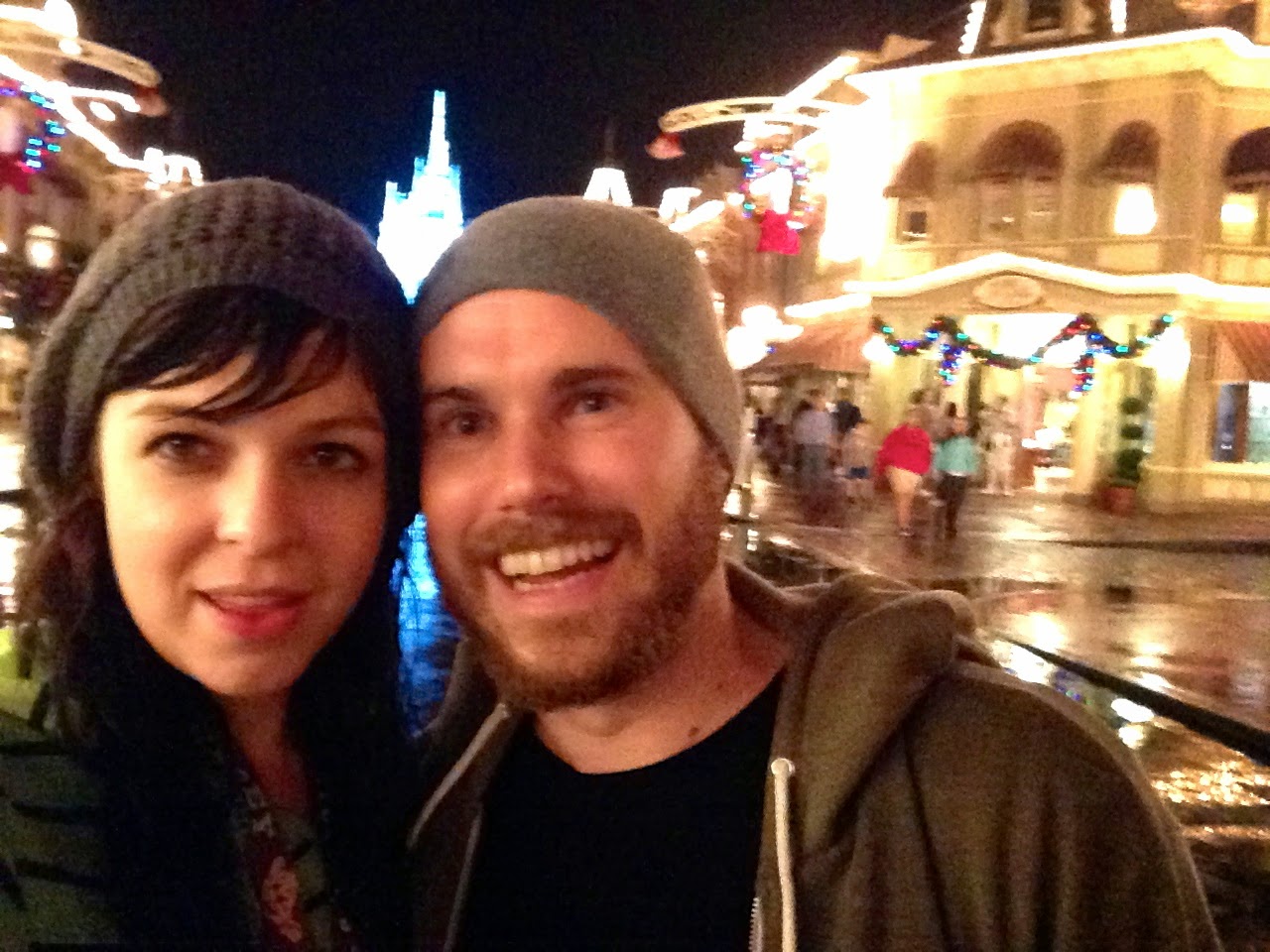 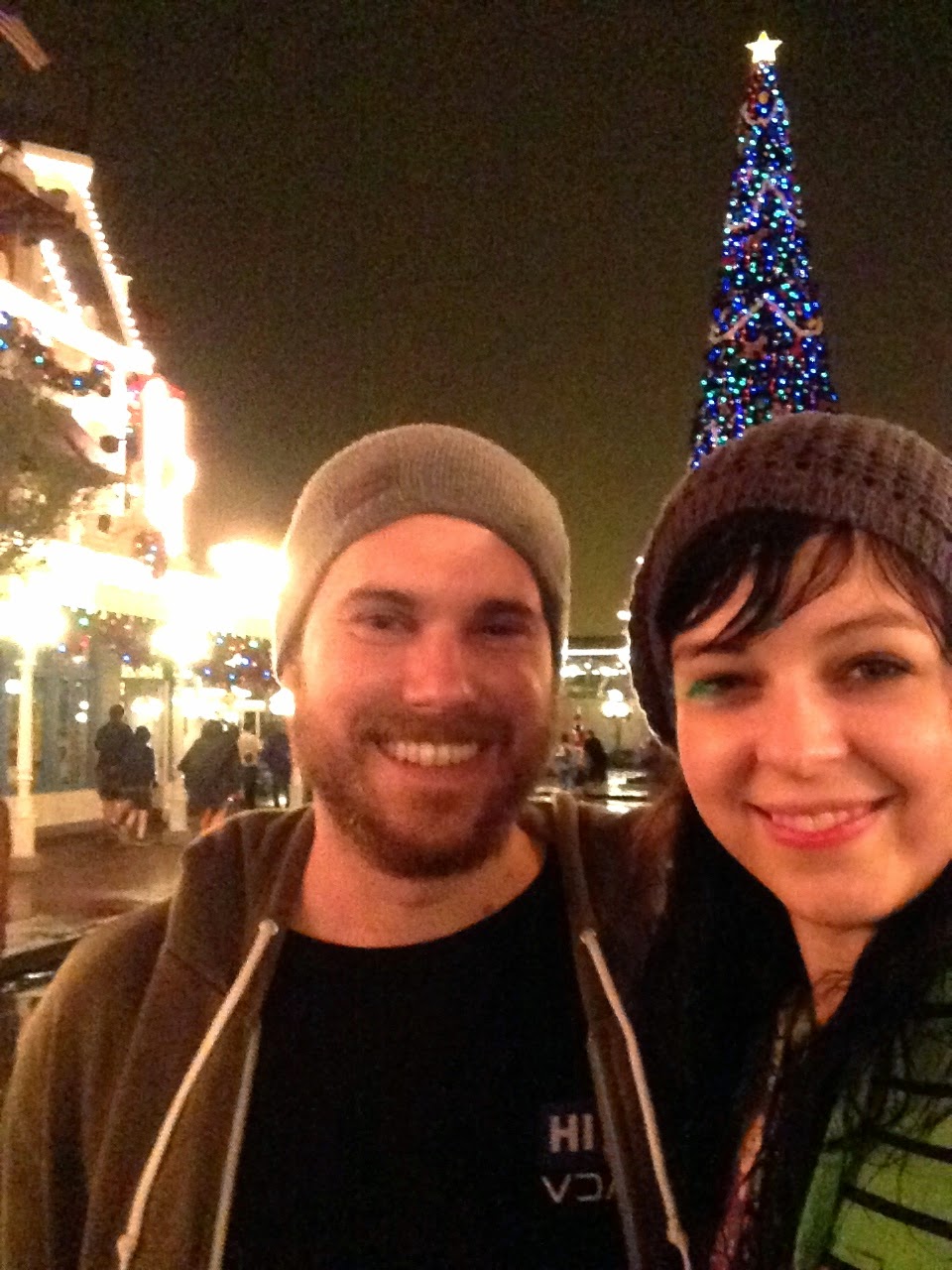 What with one thing and another we'd never gotten around to dinner, so we decided to duck into the food court on our way and get something to go (the rain had stopped again so no danger of soggy dinner). In the interest of time and simplicity we just got some nuggets, plus Pat ran over to the gift shop for some more Maker's Mark. Our cashier cast member was a new recurring favorite: Opal from Jaimaca. Say hi if you're ever at POR!

And then I spilled ketchup all over myself. I gotta be me.

So yeah! We went home, ate, then bedtime. In the morning: NO RACES AT ALL.