The Fairest Trip Report Of All: The WDW 5K

While packing for this particular trip, I kept a close eye on the weather reports. I noticed that the day of the 5K was predicted to boast highs no higher than the upper 50s. Hmmm, I thought, and I tweeted to my travel buddies: do you think I need my puffy running vest? And they were like, running makes us hot, so probably not. And I was like, yeah, that sounds right. So I just packed pants and a long-sleeved shirt.

To paraphrase myself: The 5K was FREEZING. The end.

Anyway. The morning of the 5K, I bounced up with the first alarm at 4AM and immediately began dressing for the race. I munched on snacks, threw on my clothes, pulled my new fleece Brooks running beanie over my head, and wrapped myself in the space blanket I had saved from the Marine Corps Marathon. Thus fortified, I step outside. I was definitely cold, but not in horrific shape. I walked down to the pickup spot, grabbed a bus, and made it to the start in plenty of time.

I walked into the pre-race area and already something had changed. Approaching dawn not withstanding, it had somehow gotten COLDER. There was the usual deejay on stage, but he was having one hell of a time assembling any kind of crowd; I saw a handful of people busting it out to Psy's "Gangnam Style" but that was about it. I felt kinda bad for the guy, but that didn't keep me from immediately running into one of the white tents set up in the area. It was here that I discovered that I had forgotten my Garmin, but as it was just the 5K I wasn't too beaten up about it.

After milling about a bit, I received a text from Katherine that she was in the same tent, so I met her and her friend Kinley (is that right, KRaut?) by the tall man with the giant brown Afro wig, an individual who would prove his worth as an identifiable meeting place all weekend. Meanwhile, we got a text from Nicole that she had woken up at 4:45AM and only JUST made the buses for the race. Glad you made it to the hat 5K, Nicole du Lancret! We chatted and lingered in the tent, milking the relative warmth as long as possible before race volunteers came in and shooed us out.

And somehow it had gotten EVEN COLDER; a quick check of my weather app gave me a temperature of 37 degrees. WITH A WINDCHILL AHHHHH. The race participants all huddled together as we traveled from the pre-race area to the corrals.

I waved Katherine and Kinley off at corral B before depositing myself in corral C, as close to the middle as possible so that I might leach warmth from the surrounding crowd. The anthem and pre-race chatter and general to-do seemed interminable. I don't know if I'm insane or it was just the cold or what, but it seemed like it took forever between corral starts. Never in my life had I felt so eager to start running - anything to get the blood moving.

Finally it was C's turn, and we took off. Many were worried that the chilly temperatures would mean that they would run the 5K too fast, messing up their Dopey plans. I may have had that problem, except - have you ever tried to run without moving your arms? Slows you down in a big way, doesn't it? Well, I had originally planned to chuck my space blanket at the start. Then I amended that to chucking the blanket once I warmed up. I NEVER WARMED UP. And so I ran the ENTIRE RACE straitjacketed into my space blanket. Times be damned; I just wanted to conserve body heat as much as possible.

But not even the cold could completely destroy the joy of running in Walt Disney World. Although I was far too chilled to stand in lines for characters, I did pause once or twice to take a picture. Being in Epcot continued to make me happy - I just didn't want to linger in it. 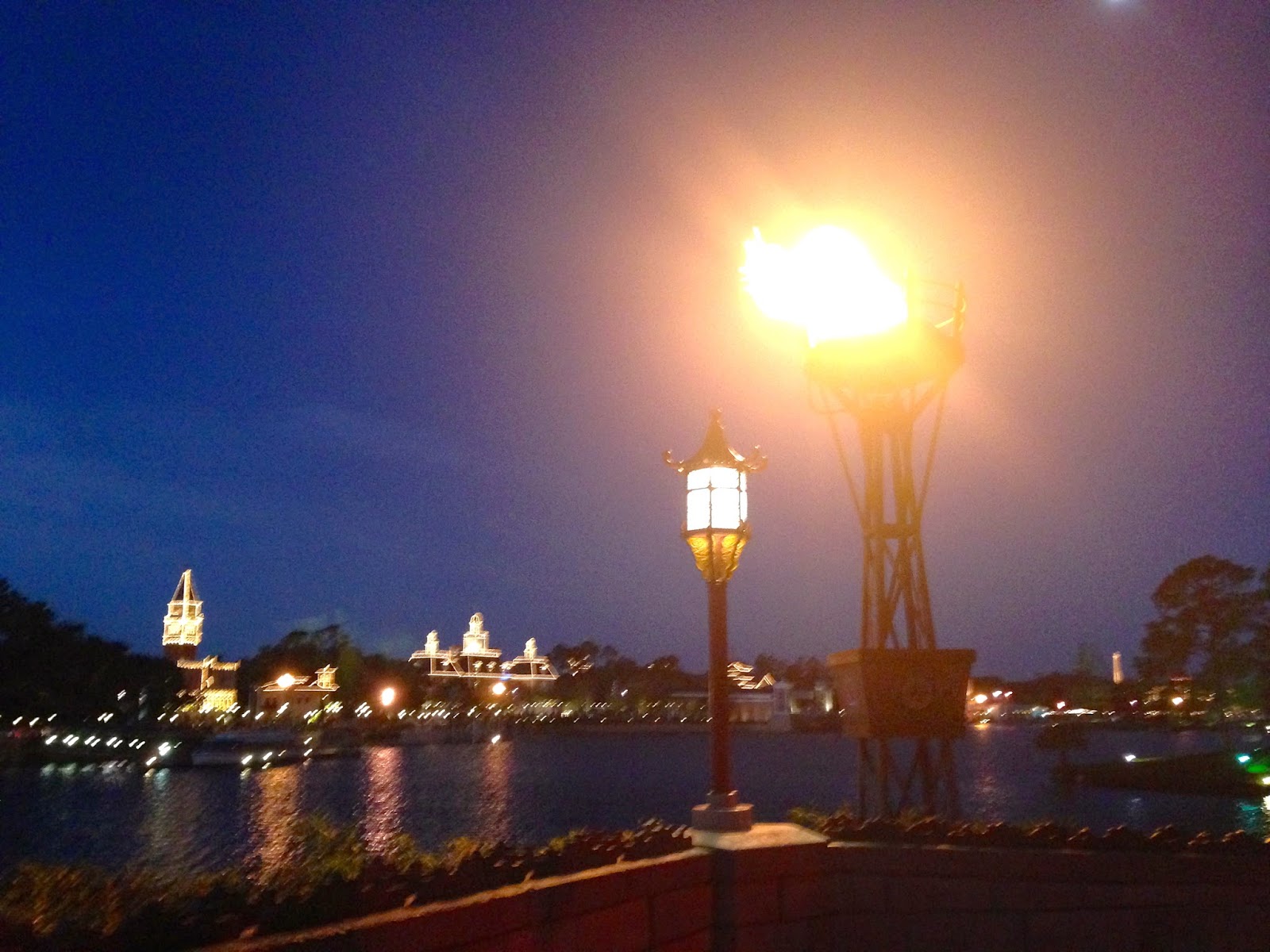 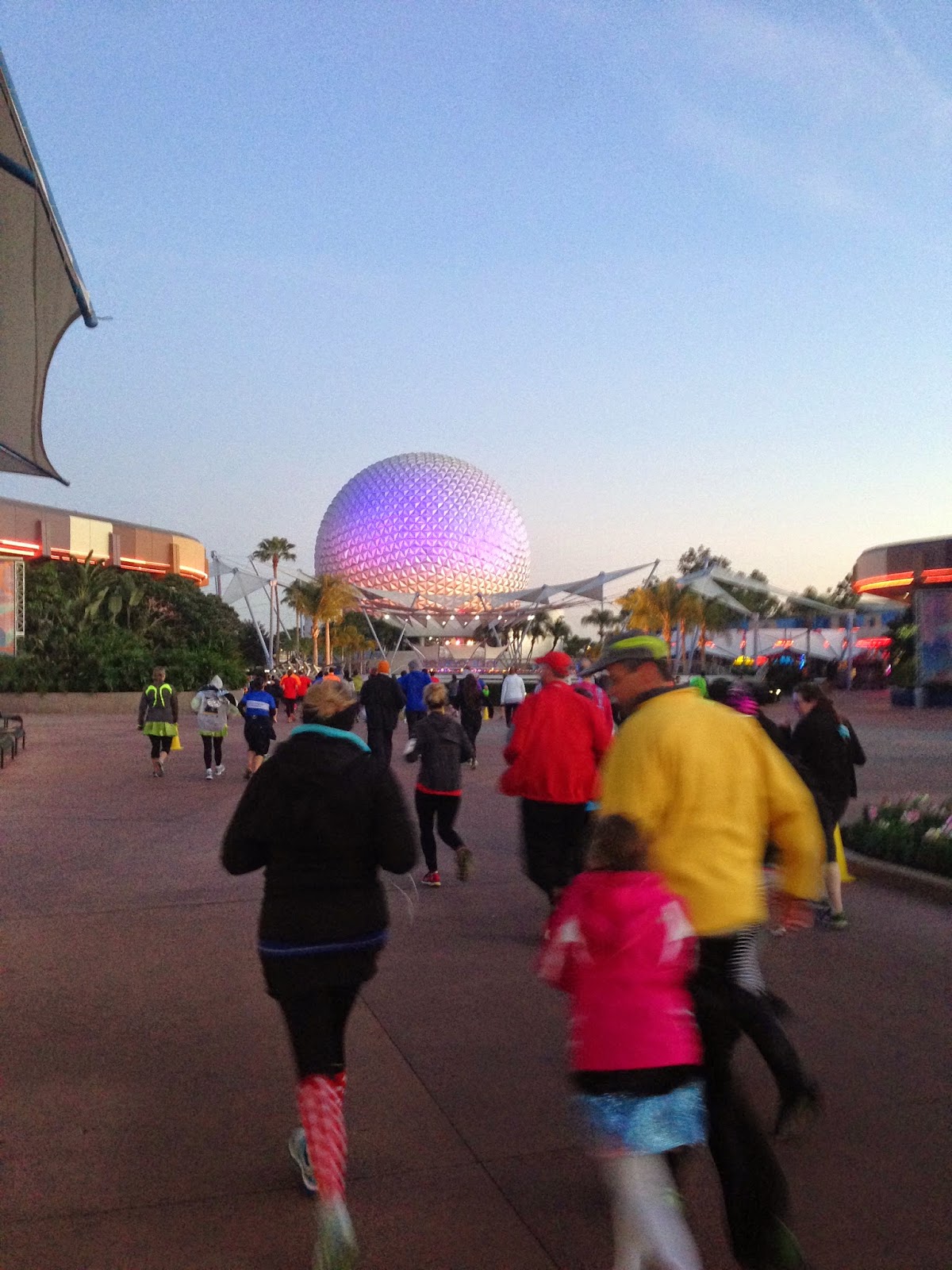 And so I'm afraid this recap is kinda dull. Basically I ran slowly in my space blanket straitjacket, felt really really really cold, admired Epcot, and then stopped at the finish. I blazed through the finish area as fast as possible, collecting my medal, liquids, and snack box in record time. From there I raced to the bus stop, lamenting the lack of runDisney space blankets the entire time.

I had barely broken a sweat, but I was just dewy enough for a chill in the cold cold air. Therefore it was particularly painful to see that the line for the Port Orleans bus was RIDICULOUS. It took me twenty minutes to climb aboard, and even then I was the last person on. By that point my hands were getting stiff and I was shivering a little. SO NOT COOL, FLORIDA.

Arrival at the resort still meant that I had to brave the temperatures on the walk back to the room, but I was rewarded with comparatively warm air and a half-hour long shower that at least raised my core temperature to normal levels.

One race down, three to go!

Up next: a day in DAK and the Studios.