The Fairest Trip Report Of All: The WDW Half Marathon

I'm not gonna lie, guys - throughout the entire Dopey Challenge, my morale was never lower than right before the half marathon. Prior to the 5K and 10K, I could think to myself, "Well, at least this will be over quickly." A little less or a little more than an hour respectively and done; a hot shower and park time were right on the horizon. The half, however, inspired only thoughts of HOW LONG THIS WAS GOING TO TAKE and OH MY GOD I HAVE 26.2 MORE MILES THE NEXT DAY UGH.

At least I was learning, though! After a freezing 5K and a decidedly chilly 10K, I had stopped trusting the run itself to warm me up. This time I layered a tank over a long sleeved tech shirt, pulled my fleece cap over my head, AND - guys, pay attention here because it was totally the kicker - I finally had the smarts to wear my gloves. Cold, stiff hands no more!

Thus armored, I threw my space blanket over my shoulders (with the hope that I would really be able to toss it this time) and headed down to the buses, which deposited me in short order at the start line. I was sad to see that the White Tents of Warmth were now in use for other purposes and no longer available for runners, but I regrouped, hopped in the bathroom line, and headed over to the corrals.

Katherine (hereinafter referred to as KRaut) and I were now in the same corral! Yay! And she had brought her hotel buddy, Also Katherine (hereinafter referred to as KVac and the reason why we have these designations, clearly). Through a series of texts I found them toward the front of corral J near that bastion of consistency, The Guy in the Brown Afro Wig. A few pleasantries and an anthem from the emcees and the race was off!

Although we were obviously much farther back in the corral lineup, the corrals seemed to take off much faster than during the 5/10K. In all the excitement I made the questionable decision to toss my space blanket and regretted soon after. KVac to the rescue! She pulled a discarded fleece top from the fence and put it on, encouraging this recycling behavior in others. Two minutes and another corral shift later and I was wearing a neon orange sweatshirt while KRaut girded her arms with fuzzy Mickey pants. Much better. 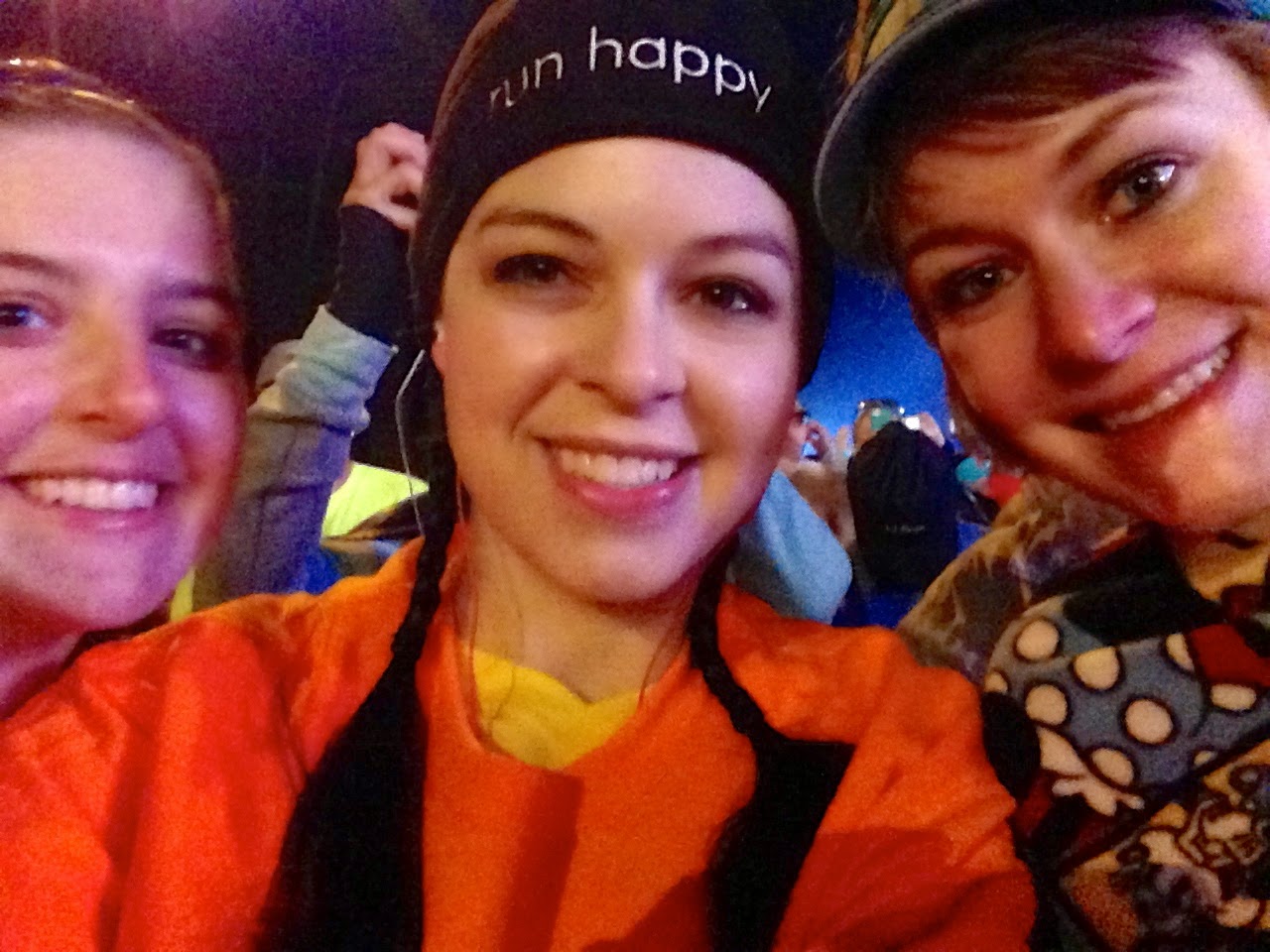 Shortly after that it was J's turn to go, and we gently took off down the highways of WDW. I initially, as per usual, put on my music, but having running buddies rendered it less and less necessary and I found myself turning it off as the race wore on. 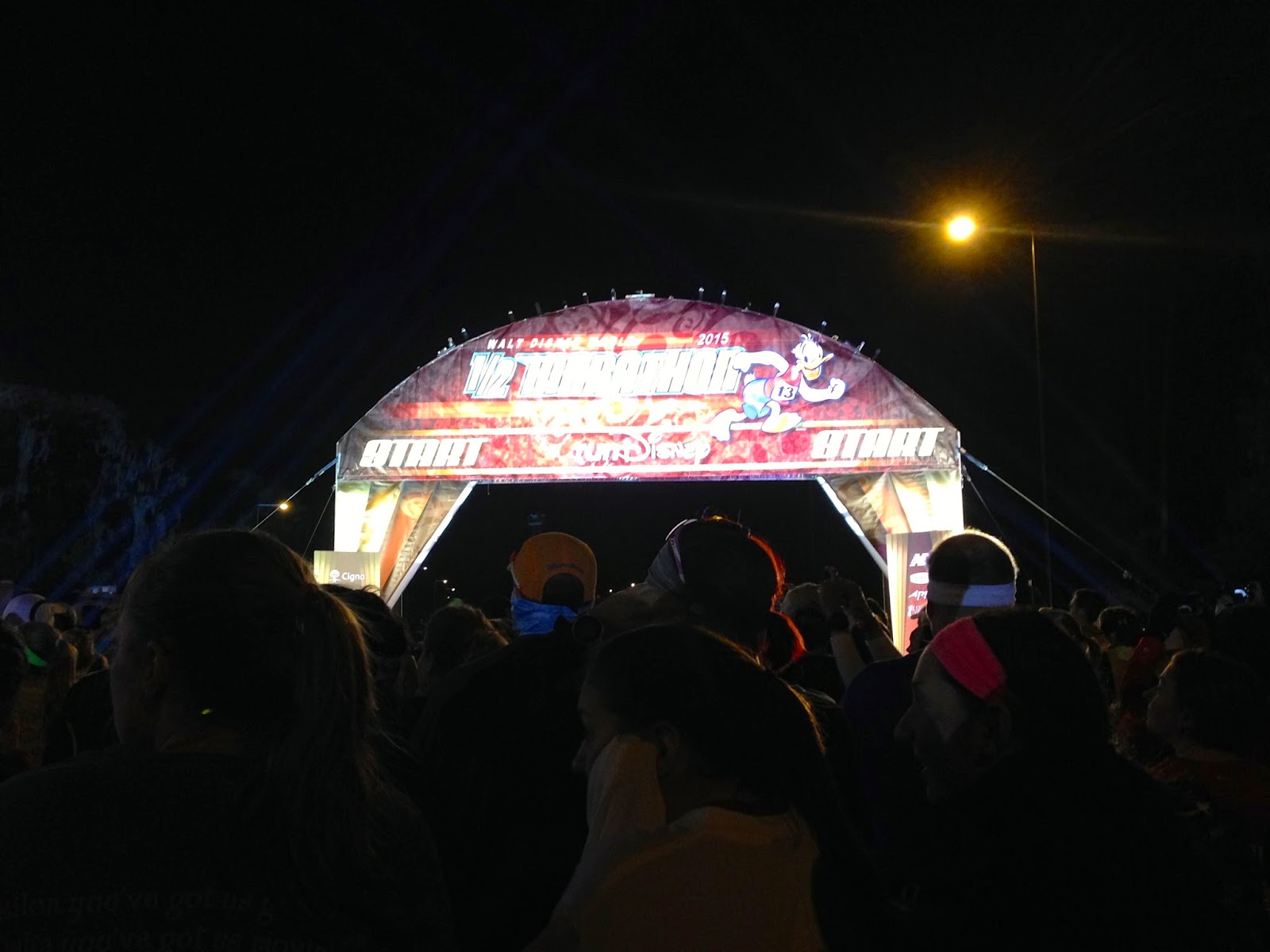 This race follows the same pattern as the Princess Half, so there were no surprises for me. We ran down aforementioned highways for awhile before entering the Magic Kingdom a couple miles in. I reluctantly tossed my sweatshirt here so that my bib would show for pictures and found that, surprise, I was an okay temperature! Yay! Running up Main Street was a thrill as per usual, and the music in Tomorrowland never fails to make me happy. We stopped for a brief bathroom break in Frontierland before heading into Fantasyland and through the castle. 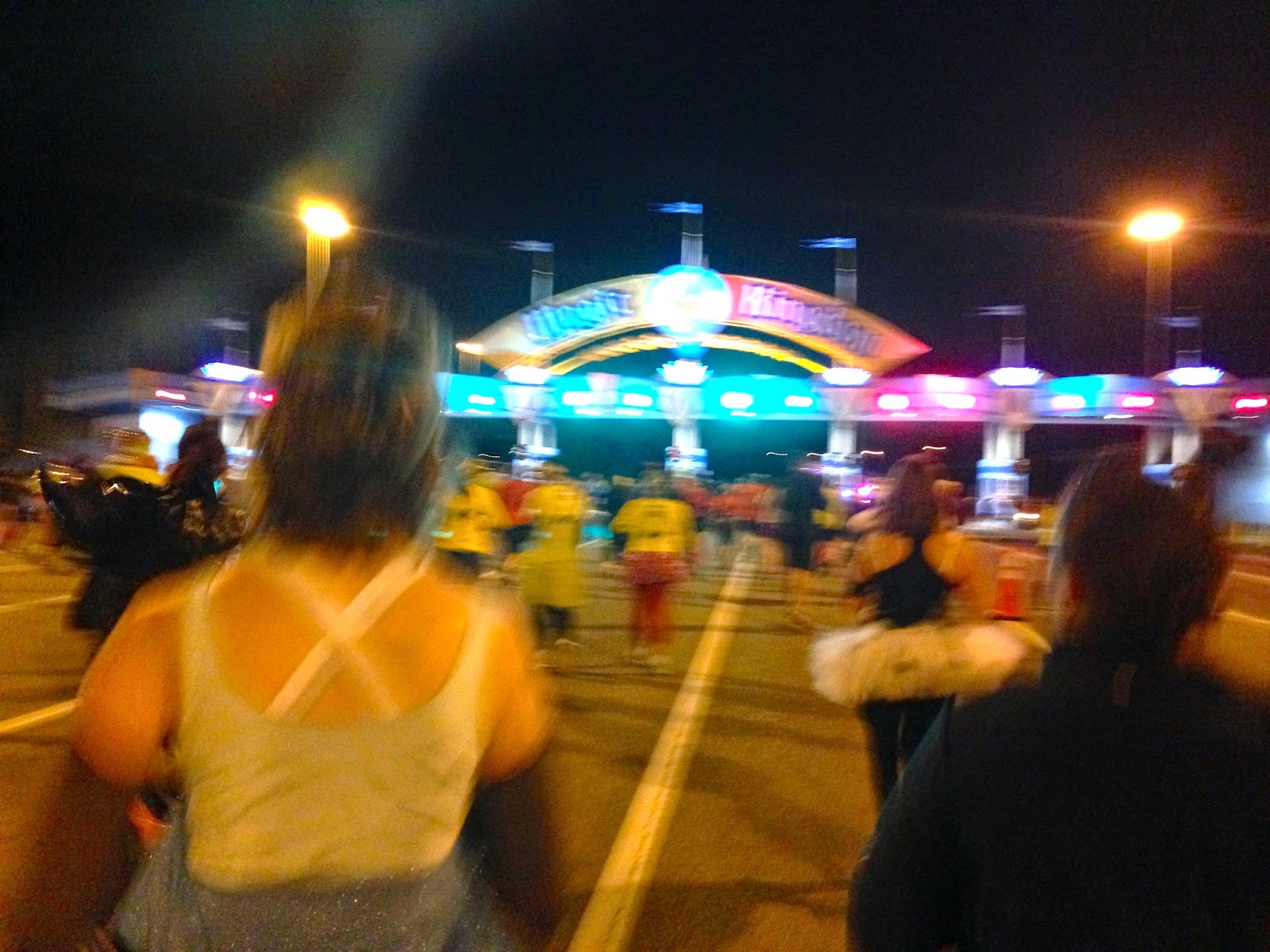 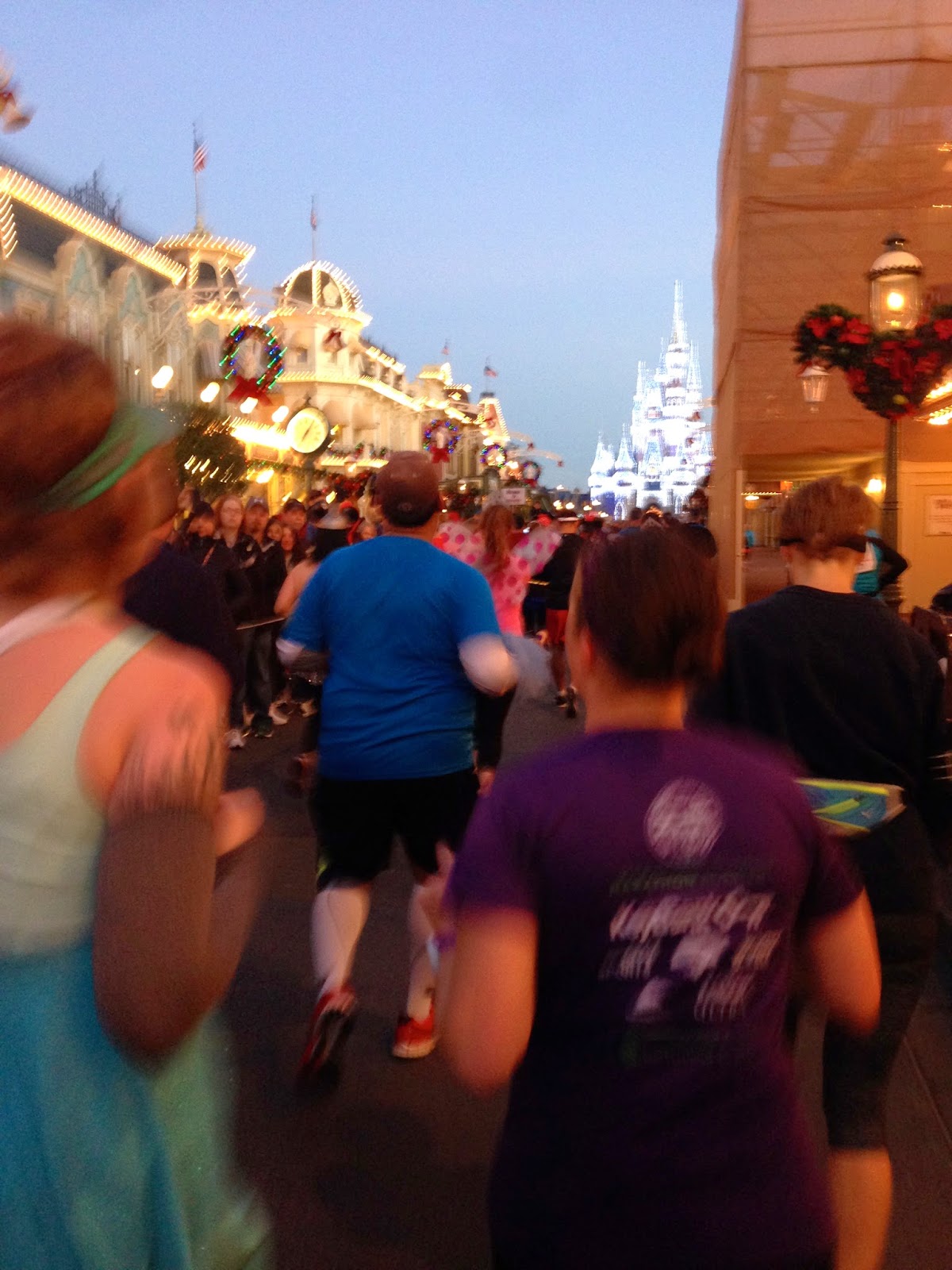 Not long after that we exited the parks and ran past the monorail resorts. Then started the boring part - the many miles of roads between the Magic Kingdom and Epcot. Sure, you have the promise of Epcot to sustain you, but you know there are SOOOOO many miles before you get there and when you do it's pretty much over, so it's not much more motivation than the regular finish line, at least for me.

Right, so, anyway. Highways. Yeah. I will give runDisney credit - they put effort into livening things up. There were deejays and entertainers at various stations, with the halfway point marked by stereos blasting Taylor Swift's "Shake It Off" - the version sans rap, which pleased KRaut enormously. There were also several character stops, but the lines tended to be fairly long. The only one we deemed worth featured Mary Poppins, Bert, and the penguins, just like when my mom and I went to Mickey's Very Merry Christmas Party. This Bert, however, looks awfully young, no? 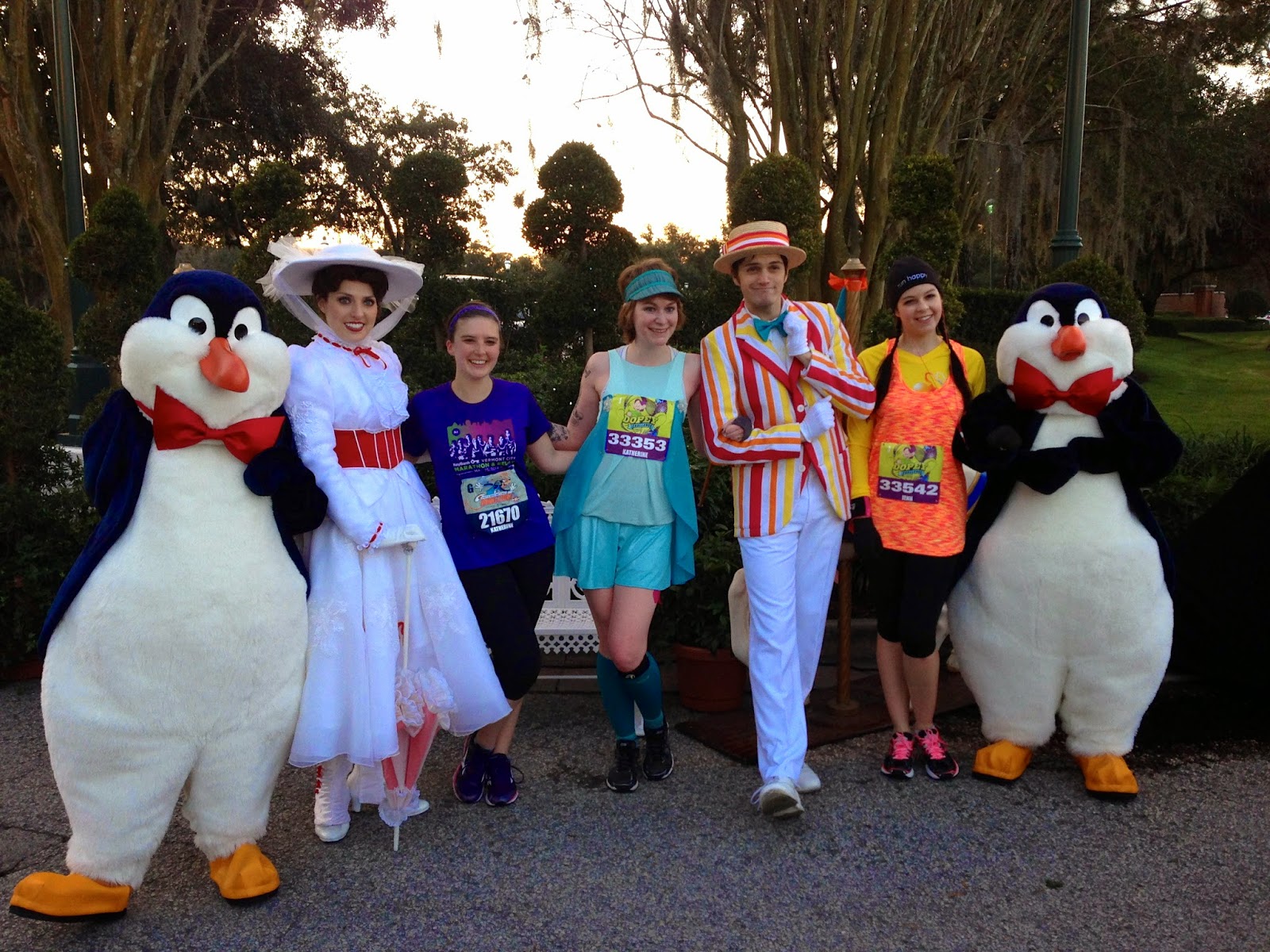 From there on our race was fairly uneventful. We plugged away at a Dopey- and Goofy-friendly pace until mile 12; that mile marker was Frozen themed and KRaut was dressed as Elsa, so we stopped for the photo op. Then it was on through Epcot and the weird out and back up and down the bridge, past the gospel choir, and finished!

I picked up my medal, snacks, and drinks, thanked the Katherines for sticking with me, and hopped a bus back to the resort. I was pleased to be done, but there was still the marathon to tackle in the morning!

Up next: back to Animal Kingdom and the Studios.