As if leaving isn't bad enough, the final day of a Walt Disney World vacation piles on another hardship: waking up earlier to gather your stuff and check your luggage. I was up early to shower and finish packing; I eventually nudged Pat awake and he did some last-minute project work while I packed. Then it was off to airline check in where we dropped off our luggage and got our boarding passes, followed by bell services to store our carry-ons.

The plan for the day was now the Animal Kingdom, so we hopped a bus and headed straight to our first FP+, an early morning trip on Kilimanjaro Safaris. We were pleasantly surprised to be routed through to the wheelchair loading station, which allowed us to skip the final portion of the queue. As is often the case, the animals were definitely more active in the morning, especially the giraffes. 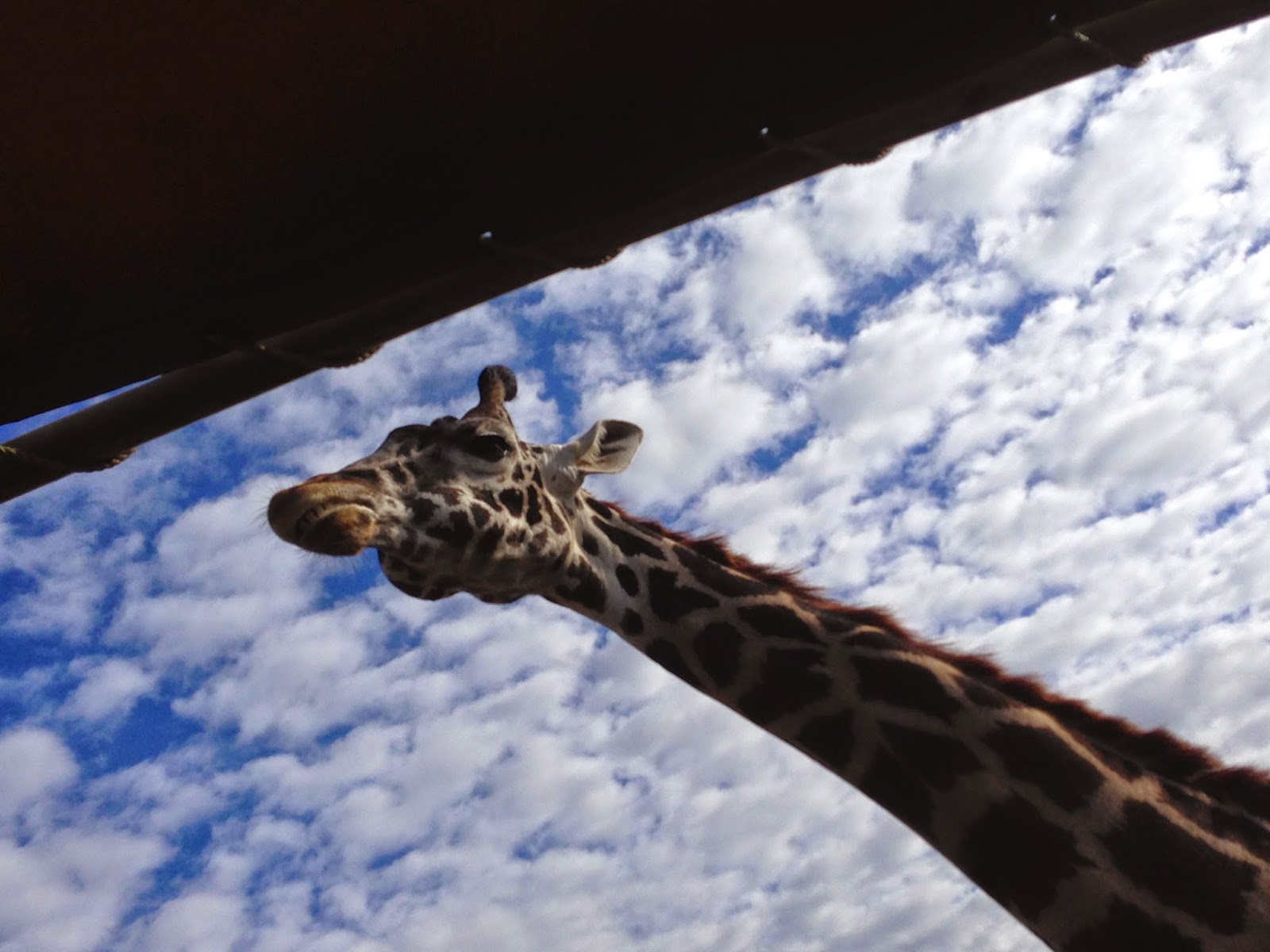 The only logical post-safari breakfast choice was of course the paw print brownie from Kusafiri, although this time we just got one to split. It was actually really nice of them to give us one, as they aren't technically supposed to be available until closer to lunchtime, but I guess they had gotten them prepped early. Take that, Fairfax Fare customer service!

We had also purchased coffees,which we took with us on a Pangani Forest Trail adventure. Which, to be honest, was not that exciting. I mean, hippos are nice and all, and I guess gorillas are kinda cool, but I've never been much for the monkey/great ape end of the spectrum. They look too much like people. Also, Pat was NOT having the naked mole rats. I much prefer Maharajah Jungle Trek (TIGERS TIGERS TIGERS).

Our next FP+ was for Dinosaur, which we rode with the express purpose of trying to look as bored as possible in our ride photo. Success? (Do the carnotaurus overlay in your head.) 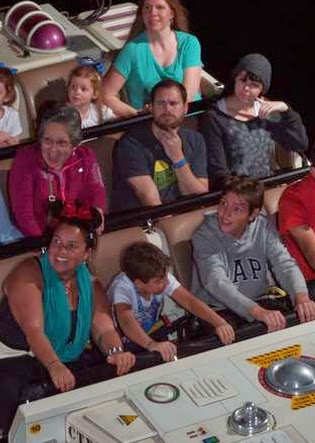 After that we went directly to Everest for our final DAK FP+ slot. Oh, Everest. I love you so. 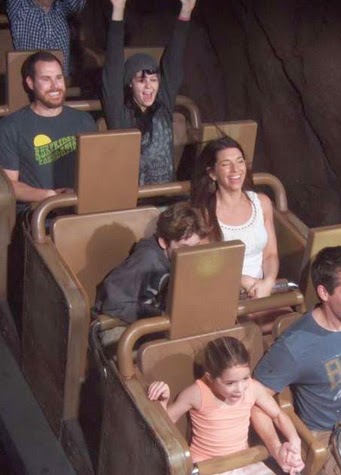 This finished out all our DAK plans. It was time to move on to our final park of the trip, the Studios. We grabbed a bus and proceeded directly to the FP kiosk by Tower of Terror (the one by Starring Rolls was closed for some reason). We got a FP+ slot for ToT, then used some of our paper FastPasses to ride Rock 'n Roller Coaster while we were in the area. It was a weird ride, though, because neither of us knew the song.


All that traipsing around had made us hungry, so we considered our dining options and landed on Backlot Express. Pat was dismayed by the sudden lack of any kind of burger as promised by the park map, but we found acceptable alternatives and dug in. More on that in my food review posts.

We had a couple paper FastPasses left, so we spent two on Toy Story Midway Mania (this made me especially happy as I had thought we wouldn't get a chance to ride it). I managed to narrowly edge out Pat's score - and I think this may have been my best score ever? I've only ever gotten the beaver before. Cats are for winners! 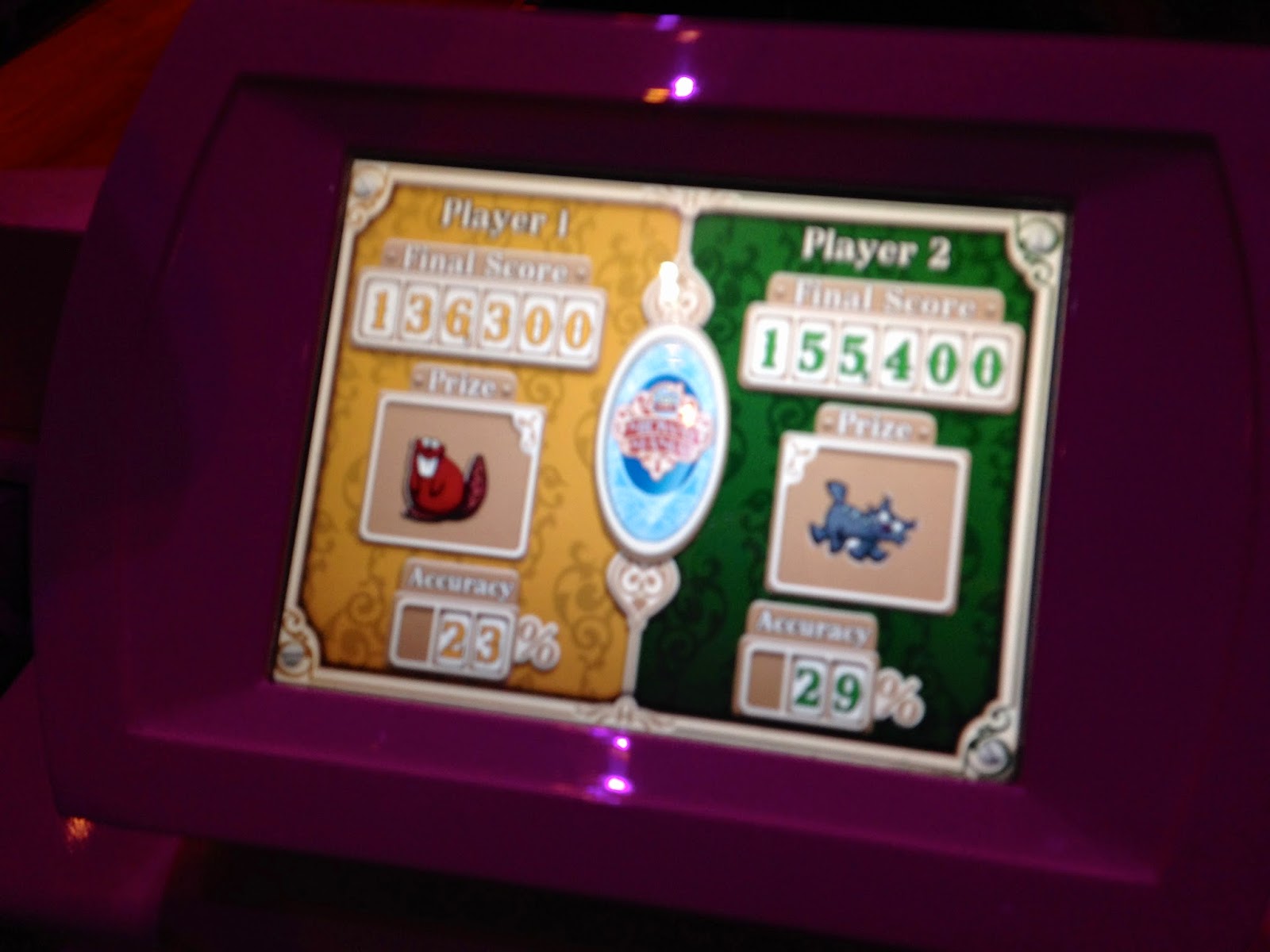 Next on the agenda was one more trip on Star Tours, where we had what I consider to be the BEST POSSIBLE COMBINATION: the Wookie planet and then the water planet! Far and away my favorite sequences. Almost as good as being the rebel spy!

There was still time to kill, so we wandered into the Great Movie Ride and took another spin through the movies. I was all set and ready to request the cowboy sequence, but we ended up getting it anyway. And let me say that for all my many, many years always getting the gangster, the cowboy version is superior. I mean, they get FIRE! 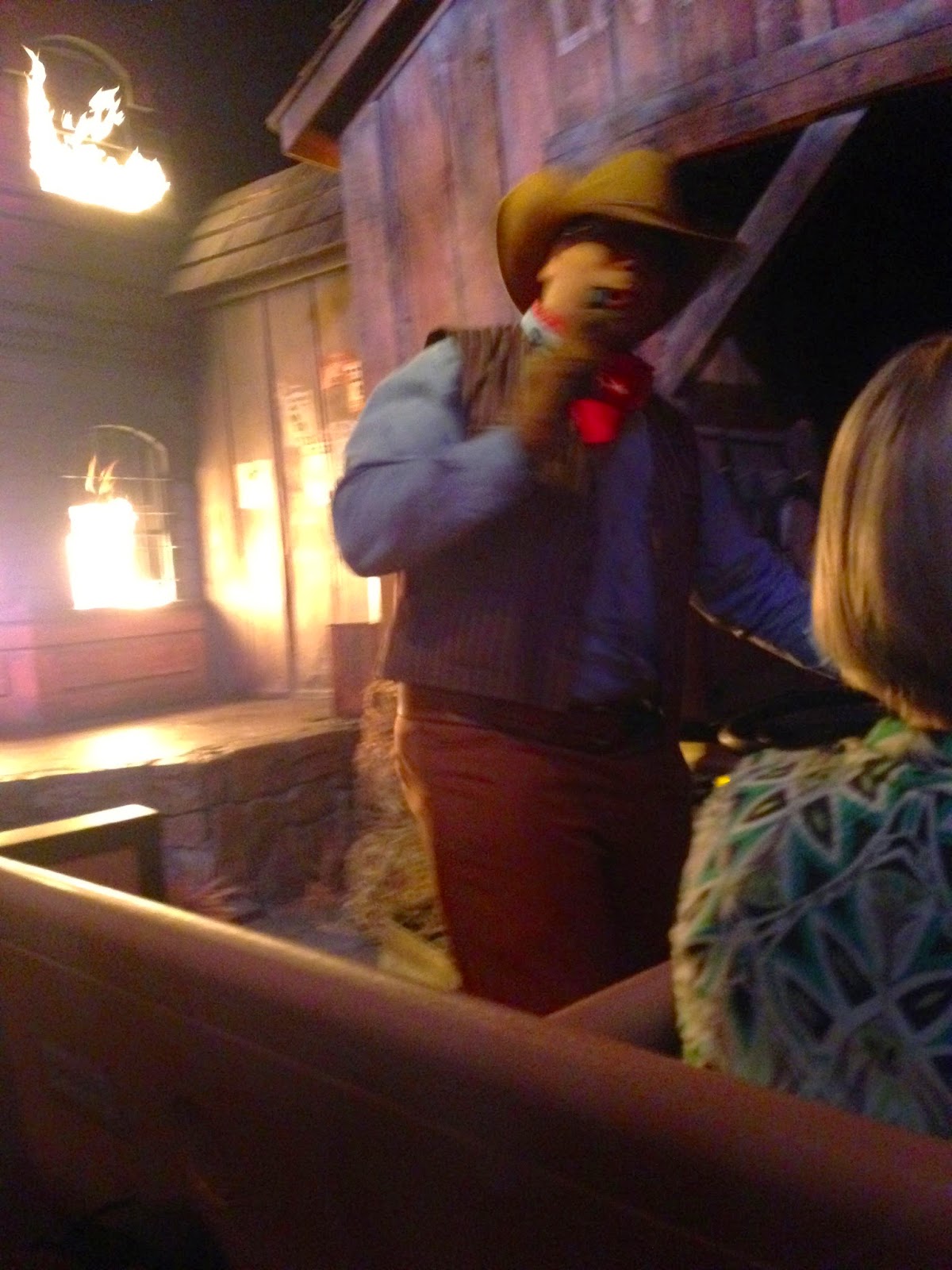 I don't have anywhere logical to put this, so I'm just going to say it now: tee, look at the hat.


Anyway - after that we burned ten minutes or so in One Man's Dream, where a cast member made us promise to sneak into the cockpit of a plane to Japan and convince the pilot to fly over Tokyo Disneyland so we can see the hidden Mickey. Which was frankly a pretty awkward exchange, but I DO want to go to Tokyo Disneyland someday, so...

Our final act was to use our Tower of Terror FP+ slot. This was my favorite drop sequence of the trip - much more bouncy than droppy. Oh, and our cast member was pretty good. "There's one more thing you should know before you ride this ride," he said. And then the doors closed. Well done, sir. Almost as good as the every-three-minutes guy. 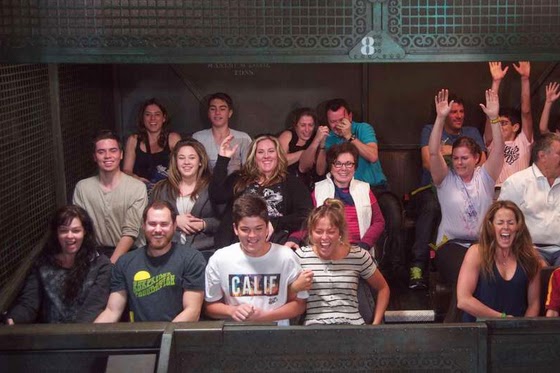 We had one random paper FastPass left, but Pat didn't want to ride anything alone so we found a random group and gave it to them before sadly dragging ourselves out of the park. We picked up a bus back to POR and I know this is really dumb but just typing this three weeks later is making me sad. Do I have a complex?

So yeah. The only logical thing left to do was hit the River Roost bar, which was just opening. Our bartender was named Talon, which is a fairly awesome name, no? Pat got a whiskey and I enjoyed one more Abita Purple Haze. 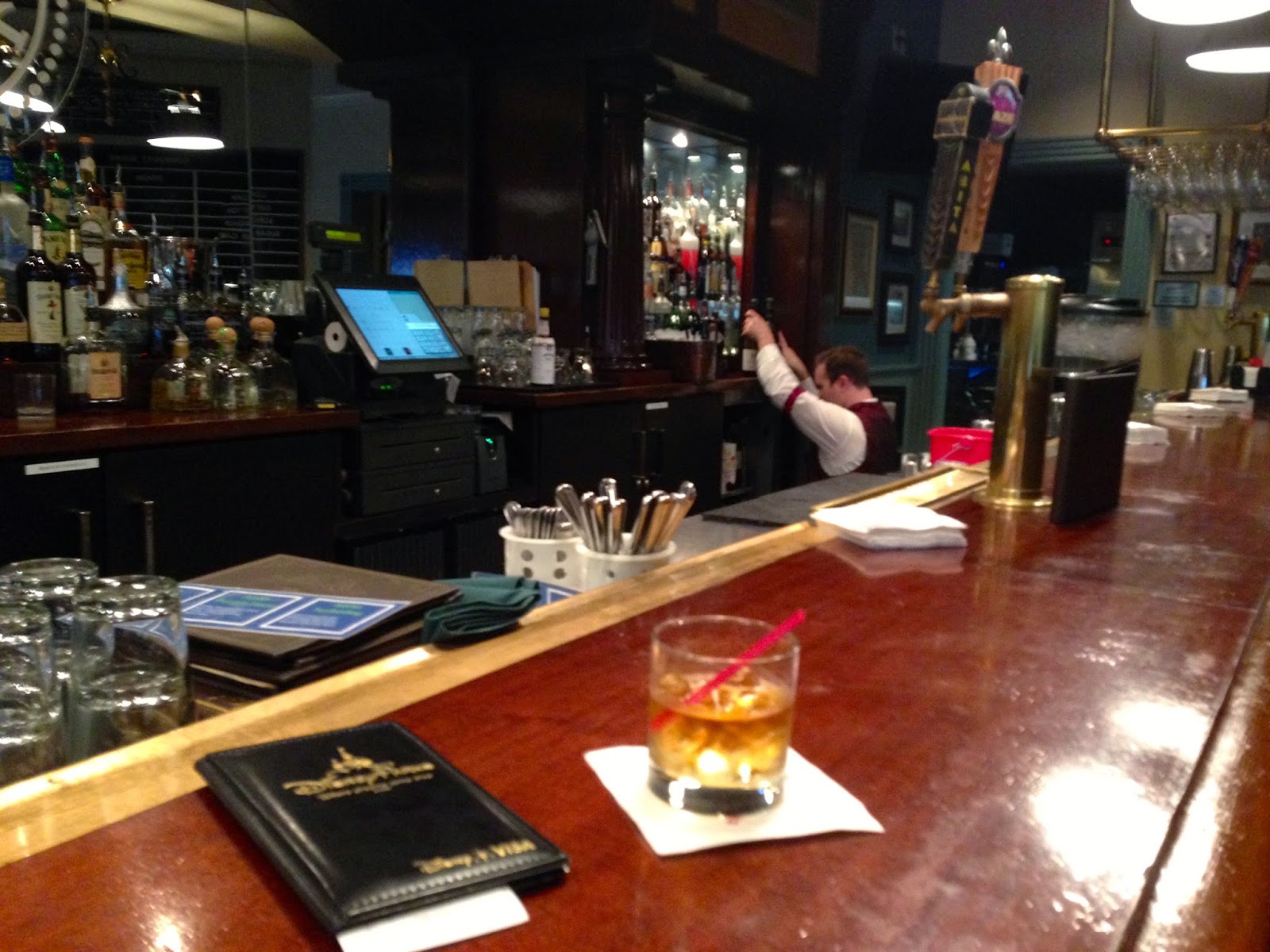 And then we had to accept that it was time to go. Between drinks Pat retrieved our carry-ons from bell services, and after settling our tab we took our posts at the Magical Express bus stop.

Our return trip to the airport was uneventful. We got off at terminal A and made our way through security (has anyone else noticed that the TSA people at Orlando International always seem extra angry?), then passed the time with dinner at a random bar the name of which I forget but it was sorta island-themed.

The flight itself was fine. Our bags took forever to show up as per usual at BWI. Pat's dad picked us up from the airport and took us back to Pat's car. We drove home. The end, I guess. BAH. I HATE THE END.

But here we are, at the end. Of the main trip report, that is. I still have some things left to talk about: food reviews and Dopey takeaways, mostly, although I'll roll those out slowly over the next couple weeks because I'm sure you're quite inundated with trip reporting by now. Thanks for sticking with me over this protracted blog series. WDW makes me happy, and therefore reliving my time there makes me happy by extension. Thanks for giving me that excuse!