The Fairest Trip Report Of All: Boatwright's Review

The trip report is over, but I still have a couple of posts left in me! In particular, food reviews. If you want to catch up on my Dopey experience, you can read all the posts in this particular trip report here. Ready? Let's go!

Pat and I spent the evening of January 8 at the Animal Kingdom, which as is so often the case in the off season closed at 5PM. This gave us ample time for dinner, so we after dumping our stuff back in our Port Orleans Riverside room, we figured we might as well see if Boatwright's would take us.

We approached the podium with no ADR at the dinner-ripe time of about 6PM at the only sit-down restaurant in the resort, but we were still seated within a few minutes. It seemed like just about everyone around us was also there for the race weekend, as evidenced by the many overheard snippets of conversation about training and running (to say nothing of the race shirts worn). Disclaimer, while at no point when passing by Boatwright's during our trip did it seem inundated with people, you may need that ADR in busier times.

Our server was very nice and pretty casual about the whole thing, offering a few favorites but no pressure. Pat and I ordered beers to start (I know, I know; never drink before a race - but they had Abita Purple Haze and I LOVE that stuff and it was only one and I got a glass of water with it so it was cool!). With the beer came a basket of CORNBREAD! Not regular bread - cornbread, It came with unfortunately not-terribly-melty butter, but the cornbread was warm so the end result was good. 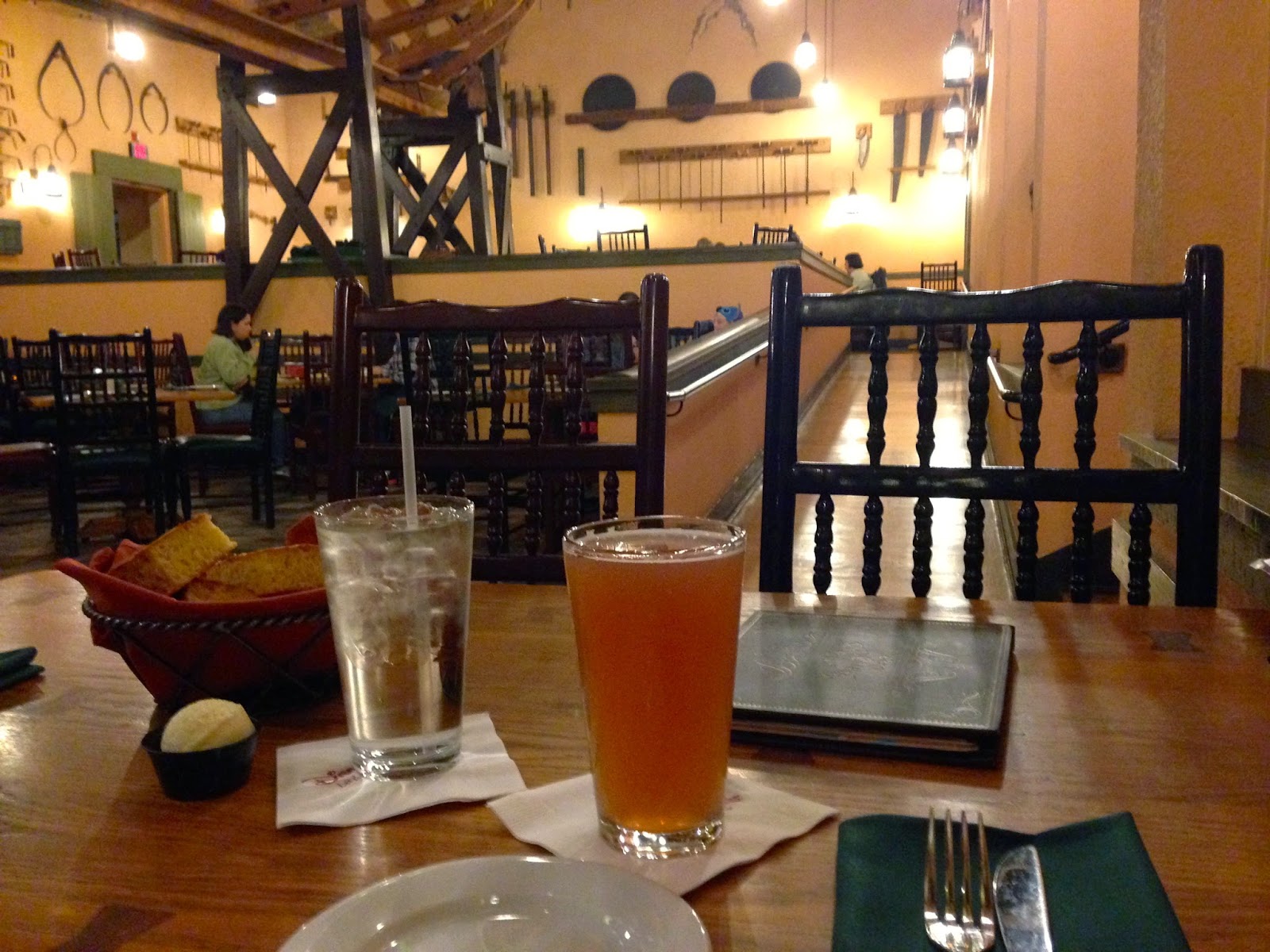 Here I confess to bad blogging - I did not actually take a picture of our entrees. That it is because, as much as I hate to say it, they were acceptable-to-subpar. Pat got a steak that was perfectly good but not amazing. I got a pasta dish, the "runner's special," which came with vegetables and chicken. Seems like that should be perfect, but the sauce was just... weird. It was watery but also kind of creamy at the same time. I ate about half and took the rest back to the room, but I never ate it.

The end result being that I had room for dessert, naturally. After careful consideration the "Brew du Krew," or however they spelled it, a mocha cake with ganache and whipped cream. This was pretty good, especially where the whipped cream was concerned, but the cake was a little dry. It definitely could've used more ganache. Kudos on the presentation, though. 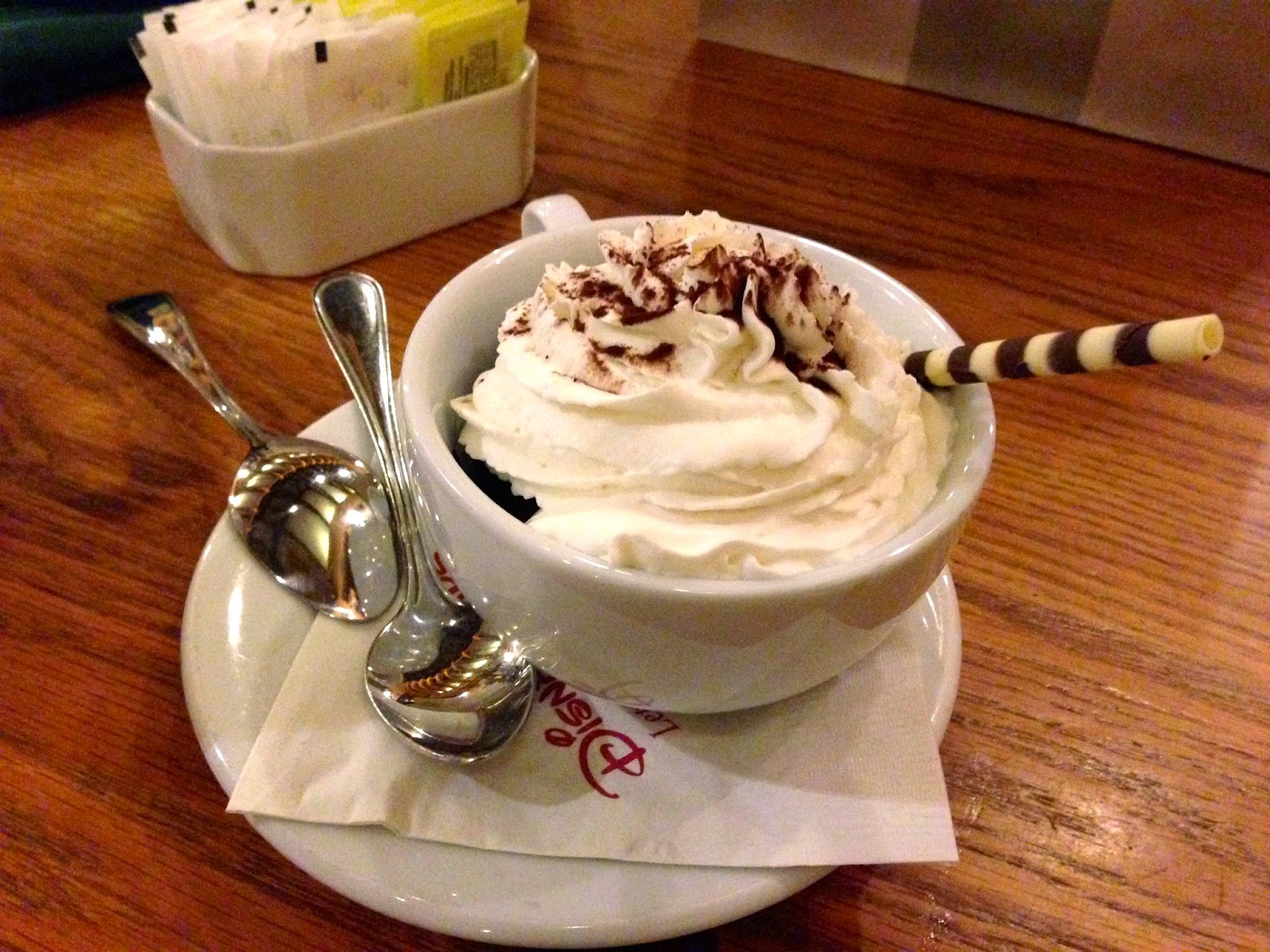 Boatwright's, as you might imagine, is themed to a shipbuilder's company, and the decor is impressive yet subtle. In addition to the various ship's parts and pictures scattered about, Pat was impressed with the themeing of the table, but I can't remember why. Something about how it was designed to look like... a thing you do to fix cracks in wood to keep them from getting bigger? Does anyone know what he's talking about? You can see one in the bottom left corner of the beer picture above.

In short, we found Boatwright's to be fine. Indeed, if we'd been there for a longer stay and/or had more time, we might have tried them again. They're not open for lunch, so that's another hindrance. But I wouldn't recommend going out of your way to dine there. Unless you REALLY like cornbread.