The trip report is over, but I still have a couple of posts left in me! In particular, food reviews. If you want to catch up on my Dopey experience, you can read all the posts in this particular trip report here. Ready? Let's go!

I dunno. Am I being unfair? I've just never stumbled across much actual meal-type food at the Studios that excited me. Cupcakes from Starring Rolls and carrot cake cookies from Writer's Stop, sure, but the Studios, by comparison to the other three parks (what up, World Showcase?), seems to lack much in the way of more interesting counter service options than burgers and hot dogs.

I'm just going to get this out of the way: their service has historically been distinctly un-Disney like. Hopefully they'll fix that with the next cast member rotation, so I'm not gonna dwell on it. (Okay, I'm still a little bitter about the breakfast sandwich that wasn't.)

We came to eat a late lunch at Fairfax Fare the way I find I often choose a meal at the Studios - we were hungry and it was there. And Pat was kinda feeling a chili dog. He got that, and he said it was perfectly serviceable but nothing to write home about.

Meanwhile, I was feeling adventurous and hedonistic. I had a marathon to run the next day. It was time for ALL THE CARBS. Mac and cheese hot dog, come on down! 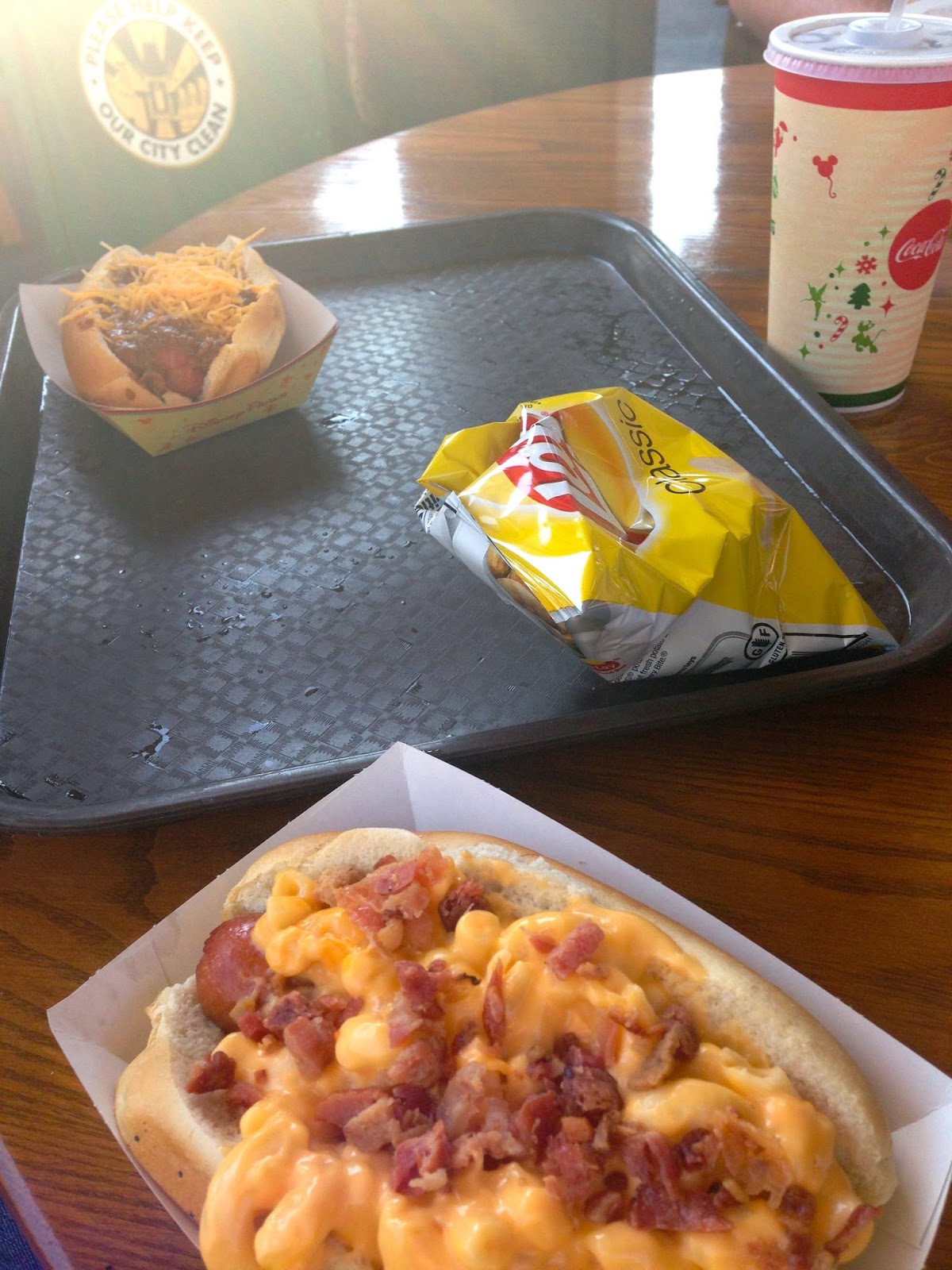 It was... a hot dog with mac and cheese on it. Disney counter service mac and cheese, so, y'know, slightly above Kraft blue box quality. The hot dog was a hot dog. The bacon was the standard anemic Disney bacon, but at least it was real bacon and not bits. Things all arrived reasonably warm.

While we're in the neighborhood, let's talk about our final Disney meal of the trip at Studio Catering Co. We once again ate there because it was nearby and seemed decent, although there were no burgers as promised by the park map. Weird.

Pat got a buffalo chicken sandwich that he deemed, once again, fine but nothing special. He was disappointed that it was just a fried chicken sandwich with buffalo sauce poured on top than a proper buffalo-style chicken, though. 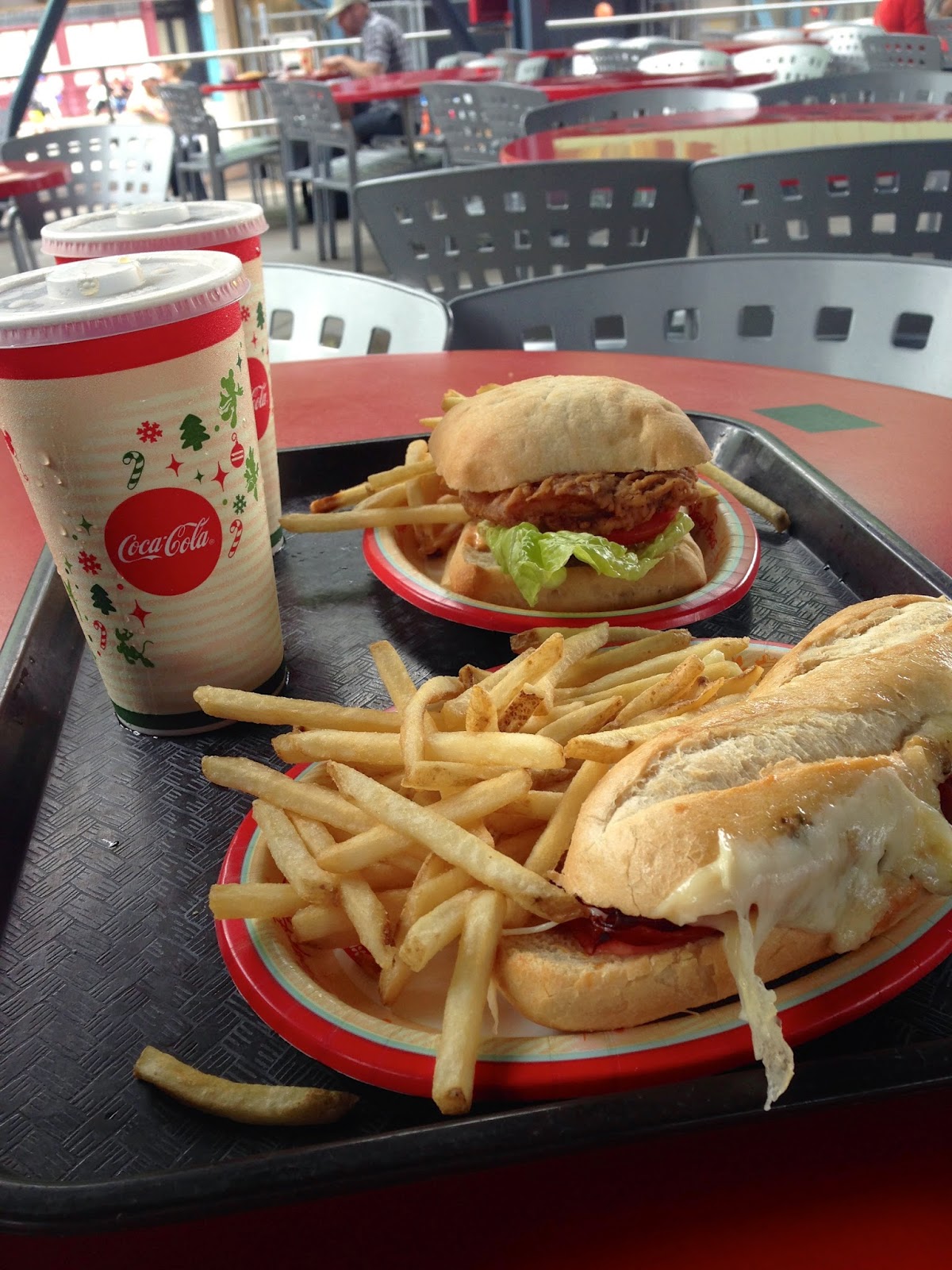 Meanwhile, I traveled off my usual beaten path of the grilled veggie sandwich and ventured out with the Tuscan deli sandwich. This was surprisingly good - the cheese was melty and cut the saltiness of the meets (salami and ham, I believe) nicely. The ciabatta bread it came on was pretty good too, although it could have been a little softer. Note: there are no greens on this sandwich, although I think there were some tomatoes. Still, if you want a strong vegetable presence, I would go whole (non) hog and get the grilled veggie panini. It's good, I promise.

In short: Hollywood Studios, your food is okay, but you could do better. Step it up.

Except for your fries. Those are always Disney levels of awesome.