An Ode to Winnie the Pooh 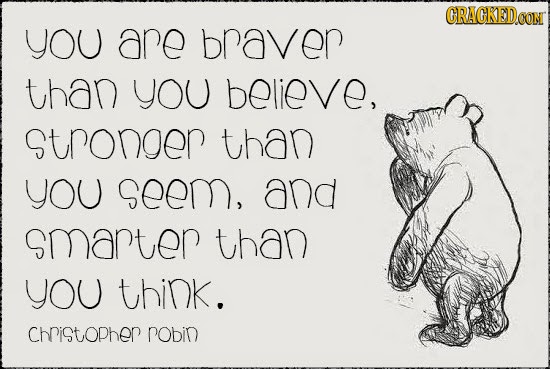 A couple weeks ago I chose Piglet & Pooh as my Marry for Kill/Refurb/Marry: Disney Partners. Naturally I had to go plumb the depths of YouTube for the perfect video to illustrate why. Shockingly, I did NOT get sucked into the YouTube vortex at that time - but my brain was ready to pick up the slack itself. But the time I went to bed that night, I was singing a rotating medley of both the movie Pooh theme:


And the Many Adventures of Winnie the Pooh theme:


And that made me remember the weird live-action Pooh show I have only very vague memories of beyond the fact that I LOOOOVED it as a little kid:


And also the books, with the Spotted or Herbacious Backson and the Expotition and Bisy Backson and Please Ring Bell If Answer is Required and don't you know what THER means and did anyone else read those Benjamin Hoff books about Taoism?

And it's the narrator!


Can't you see the presents? The cake? The candles? Neither can I. After all, we can't all, and some of us don't.

Magnificent magic, most mysterious, make meek me make the monsters into mozzarella marmalade!


And oh my God, PIGLET WAS SECRETLY IN THE EMPEROR'S NEW GROOVE!


Is there any more? No, there isn't. I thought not.


Or at any rate, I don't think so. It isn't meant to be. (Although in all seriousness, every time I watched a clip I would think of ANOTHER good one; I'm leaving out A LOT. DON'T. FEED. THE. BEAR.)

Basically what I'm trying to say here is that Winnie the Pooh in all its forms, at once clever, gentle, and philosophical, shaped my childhood and continues to be one of my favorite things. Ever. You might even say that Pooh, not Roo's medicine, is what Jenns like best.