JENN: Tell me about your week in running!

MOON: This week for running was a good establishment of Baseline Ability. My mileage was about 23 miles, I think? Lower than it has been of late, but I am doing 5-7 mile runs and trying to never run slower than 6.5mph.

This week was a success. Last night I ran 6 miles; 4 at 7mph and 2 at 6.5mph. Speed-wise, that's pretty good for me! When I'm pretty much dead or tired my baseline speed is usually 5.5-6mph. My goal is to slowly increase my BL speed before I add on any mileage (no more than 10 miles at this point). However, this excludes runs outside for fun.

Hm, that's seems super technical, sorry for the long tirade. Let me know what you think!

JENN: Haha, not at all! When I do speed work, I generally top out at 7.5 but that's only for a minute.
I think it might try to work that into my runs this week but we'll see.

MOON: So, I can do up to 8.5 when I do SHORT speed work. XD But, I don't do that as often now (mostly because I want to make my "slow" running speed faster).

JENN: I haven't tested my limits - I'm too chicken - but it's probably somewhere in that area. Or slightly below that really, because you're faster than me, and that's pretty awesome!

MOON: Ha, so as I was running on a treadmill at the end of a 6 mile run, I decide to up the speed. Annnnd the treadmill breaks. And not breaking and turning OFF. The screen went all weird; colored dots showing up at random. It's was like Trinity logging into my treadmill. No white rabbit, though.

JENN: There's something we hadn't considered: hacking the Matrix and increasing our max running speeds in the code. 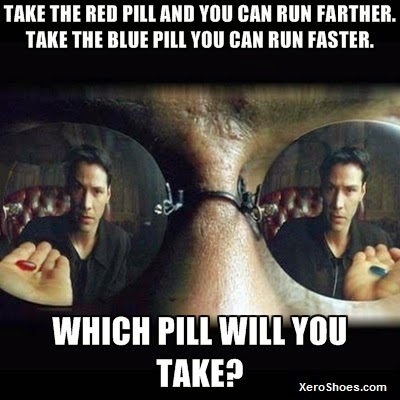 MOON: Ha. I'll ask Morpheus next time I hack into the mainframe. :P Anyway. The thing wouldn't turn off. At first I feel panicky (it's hard to hop off when you're going faster than usual and when all the machines are super close together). I tried to just deal with it, thinking it would just eventually shut itself down. Oh, and I had already tried BOTH emergency shutdowns, multiple times.

In the end I decided I would try to hop to the side panel and try to balance myself so I wouldn't trip on another machine/person OR get rocketed off the treadmill. While I'm not granted elegance in most physical movements, this one time I did alright. No harm done. I had to unplug the machine to shut it down. It makes me want to anchor myself to the plug next time.  >_>

JENN: Wow. All I did last week was run outside. (All thought I have my own falling story...)

MOON: I will only run outside if it's not super sunny. And if Christian goes with me. How did it go? Did your inner running spirit sulk about it?

JENN: A little bit. Mostly because it's SOOOO EARRRLLLYYYYY. But I also like getting home after work knowing my run is already out of the way and I have the evening to do what I wish.

MOON: I love that feeling.

JENN: Another thing we love? The roundup!

- Fairytales and Fitness makes race day prep a breeze.
- Pink Elephant on Parade feels the pain of running shorts. (She may also mention some that don't suck, but I couldn't see through my sympathetic tears.)
- The Runner's Guide to WDW highlights runDisney photo ops.
- Rolling with the Magic has a thorough rundown of your Star Wars Weekends meal options. Can someone please explain where the blue milk fits in?
- Disney Tourist Blog is full of warm park fuzzies.
- A Pinch of Pixie Dust eats dessert at Epcot. What are "Things I'd Rather Be Doing"?

Jenn is running the 2015 Marine Corps Marathon for the Diabetes Action Team. Will you help her earn her bib while fighting diabetes? Click here to make your tax-deductible donation.
Don't forget, you can follow us on Twitter @fairestrunofall. To see how our training is going, check out Jenn's dailymile here and Moon's dailymile here. If you have any questions for us, leave a comment or email us at fairestrunofall@gmail.com. See ya real soon!
Posted by Jenn at 8:26 AM

Email ThisBlogThis!Share to TwitterShare to FacebookShare to Pinterest
Labels: running, running outside, speedwork, The Matrix, training, treadmill, week in review