It's Kill/Refurb/Marry time again! I found this installment of the monthly blog hop particularly fertile. This time around we're talking about extinct attractions. Strap in!

Man, an embarrassment of riches with this one. Body Wars is a decided no thank you on my part, but since I never rode it I can't speak to it knowledgeably (although I can viscerally, and my viscera say: NO GOING INSIDE PEOPLE I'M LOOKING AT YOU MAGIC SCHOOL BUS).

I came THISCLOSE to killing Superstar Limo, too. Since I made it to California Adventure during the extremely brief period the ride actually existed, I think I am uniquely qualified to judge this perplexing and unpopular attraction as easily murdered.

And then I remembered that American Idol: The Experience was quite recently a thing. What are some words I can use to describe my opinion of AI:TE*? Awkward, forced, cringe-worthy, inferior prizes, total time suck for everyone involved. DO NOT WANT. Next!

* Hereinafter to be referred to as Aiight.

I know. I KNOW. A lot of you just LOOOOVED this ride. But I do NOT like touching under the best of circumstances. I still haven't even tried the replacement Stitch ride - I went through the line once but took the chicken exit in a panic because NO DON'T TOUCH AHHHH. Add a horror element and I can only imagine if I'd ever gone on Alien Encounter I would've had a nervous breakdown.

All that having been said, I find the concept very interesting. Can we bring it back, but offer a stand-off-to-the-side-and-just-watch option? All the animatronics, light flickers, and frightening sound effects, none of the saliva, hot breath, and fake alien fingers?

The obvious choice is of course Mr. Toad's Wild Ride, but since it still exists in Disneyland I feel like it doesn't qualify. 20,000 Leagues Under the Sea? Again, Disneyland.

I thought about demanding that Dreamfinder be brought back immediately, but as the Journey Into Imagination still exists in a different, albeit inferior iteration, I don't think that works either (and anyway I mentioned it last time).

I finally landed on Horizons, that much-loved dark ride that bowed in favor of Mission: Space. And as much as I love me some Gary Sinise, I must say the deletion makes me sad. I have fond memories of discovering the attraction with my family in sixth grade, and since this was in my No Roller Coasters Too Scary phase, I was thrilled to find something so gently entertaining. The scenes were cute and the finale "motion simulator" video was fun. And when I later found out that it was meant to be a sequel of sorts to the Carousel of Progress, I loved it even more.

If ever there was an extinct attraction with an enormous fan base, it's Horizons - someone even recreated the entire thing virtually, which is a nice stopgap but not quite the same. Please, Disney, won't you give us back our Horizons? 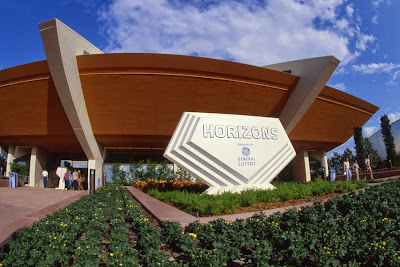 Jenn is running the 2015 Marine Corps Marathon for the Diabetes Action Team. Will you help her earn her bib while fighting diabetes? Click here to make your tax-deductible donation.
Don't forget, you can follow us on Twitter @fairestrunofall. To see how our training is going, check out Jenn's dailymile here and Moon's dailymile here. If you have any questions for us, leave a comment or email us at fairestrunofall@gmail.com. See ya real soon!
Posted by Jenn at 8:16 AM