In Which Jenn Is Headed To Universal Studios Florida

Just because I have made my decision doesn't mean I have to like it.

As I mentioned a few weeks ago, I have a conference in Orlando next week that will include a little bit of downtime. Hardcore WDW girl that I am, I decided I'm going to spend that downtime at Universal Studios Orlando so I can check out the new Harry Potter expansion.

But then of course I was listening to Main Street background music on YouTube and that made me all sad and I miss WDW and wouldn't it be silly to go to Orlando and not at least swing by? And then my Twitter buddies were all GO TO BOTH YOU SHOULD TOTALLY GO TO BOTH and I was like YEAH I TOTALLY SHOULD.

Only Universal tickets are not as cheap as they used to be, and Disney tickets have never been cheap. Oh, and naturally Universal is cleverly forcing me to upgrade to a park hopper since you can't ride the Hogwarts Express between parks without it. From a fiscal standpoint, I have to make a choice. Since I'll be expensing hotels and food and not have that much time anyway, Universal it shall be.

I am sad. I am sad not to be going to WDW. Still, I'll be there in November for the Wine & Dine Half Marathon. Yay! And I really am excited to check out this Diagon Alley thing at Universal. I've been to the Hogsmeade section in Islands of Adventure and even as a lukewarm Potter fan I was VERY impressed. I hear great things about the new Gringotts ride and the Hogwarts Express train, and of course drinking butterbeer is always glorious. It's gonna be a good time!

I'll be traipsing around USF at various points this Sunday, Tuesday, and Thursday. Who's already been to Diagon Alley? Have any tips or recommendations? What should I eat?! 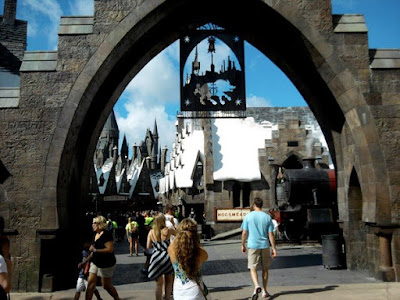 Jenn is running the 2015 Marine Corps Marathon for the Diabetes Action Team. Will you help her earn her bib while fighting diabetes? Click here to make your tax-deductible donation.
Don't forget, you can follow us on Twitter @fairestrunofall. To see how our training is going, check out Jenn's dailymile here and Moon's dailymile here. If you have any questions for us, leave a comment or email us at fairestrunofall@gmail.com. See ya real soon!
Posted by Jenn at 8:34 AM