The Most Universal Trip Report Of All: 8/18

It's the briefest trip report of all! While on a recent conference trip to Orlando, I carved out a bit of time to visit Universal Studios Florida. Click here to read all the entries in this report. Onward!

Day two at Universal Studios was buddy-less; I was the only one who had bought a multi-day ticket. And so, after two and half days of conferencing, I gallivanted off back to the park.

My cab dropped me off at the park around 4pm, and I spent the entire walk from the drop-off spot to the entrance formulating my plane. One of the perks of solo travel is that you only need to consult with yourself, after all.

Item one was to go right back to Diagon Alley for some ice cream from Florean Fortescue's - but I got distracted. First by the Blues Brothers show, then Revenge of the Mummy for some single rider action.

At that point I figured, well, I'm here and it's not raining, so I backtracked to the Hollywood Rip Ride Rockit single rider liner and hopped on that. Like the Dragon Challenge coaster, this now requires that you completely empty your pockets and then walk through a metal detector before you're cleared to ride. I considered using one of the secret song codes for my ride soundtrack, but ultimately just went with Daft Punk since I didn't have my phone to confirm the numbers. I was lucky enough to get the VERY back seat, which I totally deserved after listening to the pre-ride instruction video so many times ("AWESOMMMMMME!!!!!"). 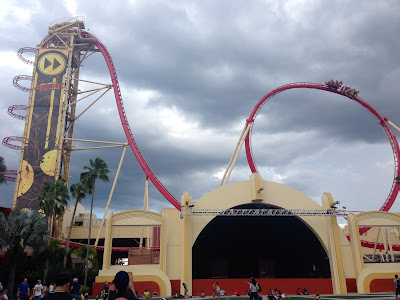 Then it was time for Diagon Alley, really, although I prioritized a trip through Gringotts over the ice cream. The single rider line was available here as well, so I took it - and found a truncated experience. No photo (fine by me), but more importantly no elevators. If you hadn't gone through the regular line you never would have known, which is kind of a bummer since the fake elevator effects are kinda part of the ride. But that's the price with pay for efficiency, I suppose.

Finally ice cream time! I got two flavors in my cup and will detail them more closely in my upcoming Universal food post. I wandered through Knockturn Alley while eating, which is air conditioned and very very dark. There isn't much in there - a single gift shop and some displays - but it's a nice extension of the area and a great place to escape the crowds. 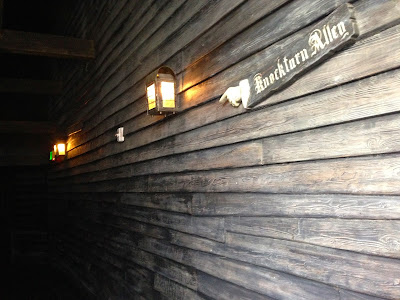 I was thirsty post-ice cream, so I hit up the bar, The Hopping Pot, for some club soda - which I was given for free! Score! I didn't need anymore food, but I saw "pasties" on the menu; if those were pumpkin pasties I will be very sad I missed them. Also I understand they have some exclusive beers, so clearly I'll have to go back.

From there I exited Diagon Alley and circled around to Springfield to look for a present for Pat, who had informed me that his favorite Simpsons character is Disco Stu. Let it be known that there is nothing Disco Stu in Springfield as far as I can tell. Let it also be known that this will become a pattern...

I passed back by Men In Black Alien Attack and pondered riding, but ultimately decided to just hop the Hogwarts Express. Incidentally, I don't think I've yet addressed the interesting tiered system Universal has inadvertently created by allowing people to ride the Express ONLY if they have park hoppers. Can't afford it? Too bad; you're not riding. An interesting approach and I wonder: has there been backlash? Will they loosen this policy at any point, perhaps if attendance drops?

No more Harry Potter for me just then, thanks - I was on a Pat Present Finding Mission. He had named Yertle the Turtle as his favorite Suess character (good choice, Pat!), so I wandered through all the gift shops in Suess Landing... and came up empty. Didn't they formerly have a giant Suess book selection? I swear they did. And it's gone. BOO.


Next Up: Marvel Island, where I hopped in the Hulk coaster's single rider line (after another pocket-emptying and metal detector-scanning). While I was in line, a guy in a standby row called out to tell me I was "very pretty," so that was nice except we ended up in the same train and he was looking at me still so I was a little worried he might start following me. #SoloGirlProblems But he didn't so that was fine and I can say: thanks dude! Also I got to be in the VERY FRONT so ultimately it was a successful endeavor.

And now for another episode of Try To Find Pat Presents That Don't Exist. Pat's favorite Marvel character? Gambit. Things Universal carries featuring Gambit? ......... Nothing. At all. I almost got him a Silver Surfer comic since Pat's a surfer but decided that the commonality of a single word wasn't enough to justify the purchase (and Pat now informs me he was never a huge fan anyway, so that worked out).

Ah well. I decided to take a walk and complete my park tour, walking through the comic area, the toon area, and the Jurassic Park area, just kinda looking around. I wound up back in Hogsmeade, where I enjoyed the single rider line through Hogwarts. 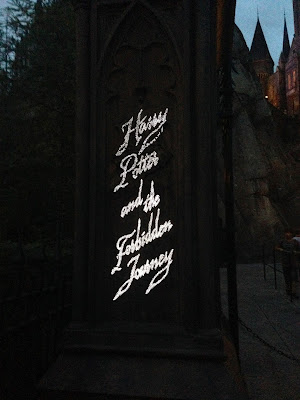 It was getting late in the evening, but I still had time to jam a few things in there. I took the Hogwarts Express back to USF with some loud people (why are there always loud people?) but I had already experienced the effects so it was okay.

Upon arrival in Diagon Alley I discovered the Gringotts single rider line was closed and the regular wait time was listed at 20 minutes. I asked the attendant if he thought it was a REAL 20 minutes or a vanity 20 minutes, and he guessed vanity so I went in. I think ultimately it probably was closer to 20 minutes but I got to do the elevator thing again so that was nice for a complete experience.

The park was closed upon exiting the ride, which meant it was time to turn my attention to such practical matters as dinner. I fought through a SEA of people exiting the park to the counter service sushi place at CityWalk. I barely got my sushi and booked it to the hotel bus in time, but I would just like to point out that if anyone can power walk from the second floor of CityWalk to a bus waiting at the drop-off point in under 4 minutes it is ME and I did. HORNBERGER!

And so I returned to the hotel and sat outside on my balcony eating my to-go sushi because it was one hell of a view.

One more day of Universal to go!

Jenn is running the 2015 Marine Corps Marathon for the Diabetes Action Team. Will you help her earn her bib while fighting diabetes? Click here to make your tax-deductible donation.
Don't forget, you can follow us on Twitter @fairestrunofall. To see how our training is going, check out Jenn's dailymile here and Moon's dailymile here. If you have any questions for us, leave a comment or email us at fairestrunofall@gmail.com. See ya real soon!
Posted by Jenn at 8:48 AM