The Most Universal Trip Report Of All: 8/20

It's the briefest trip report of all! While on a recent conference trip to Orlando, I carved out a bit of time to visit Universal Studios Florida. Click here to read all the entries in this report. Onward!

I had purchased a three-day park hopper, but in truth I didn't really need it; I'd pretty much knocked out the stuff that mattered to me in the previous two days. Mind you, I did NOT take a completist approach to park touring - I skipped a lot of stuff that I'd already done on previous visits. A first-timer would doubtless need more days. As for me, I was kind of over it, but I had that last day and figured I might as well use it.

The hotel shuttle dropped me off at the park a little before 1PM, which didn't leave me a lot of time. I booked it directly to Diagon Alley, where I once again enjoyed a ride through Gringotts courtesy of the singler rider line. I still think I prefer the Hogwarts ride just because I like the increased swooshiness of the mechanics, but Gringotts definitely grew on me over the course of my four trips. Good job, Bill Weasley!

I had skipped the conference's final lunch, and the only natural replacement at that point was Florean Fortescue's ice cream parlour (note the very British u). More on the result in my upcoming Universal food post.

I wandered around Diagon Alley with my ice cream, soaking in the atmosphere. As I said above, I prefer the headline ride in Hogsmeade, but I find I must give the ambiance edge to Diagon Alley. It's much more contained and built up higher, for starters, which makes you feel unbelievably immerse. I noted on Twitter that while in line for the Hogwarts ride I could hear sounds from the nearby Jurassic Park area, which drags you back to the real world. Diagon Alley sucks you in; as long as you remain within its confines you can see nothing but the wizard world. I dig it. 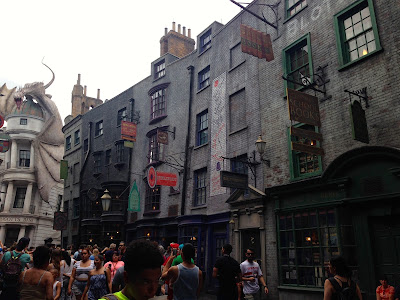 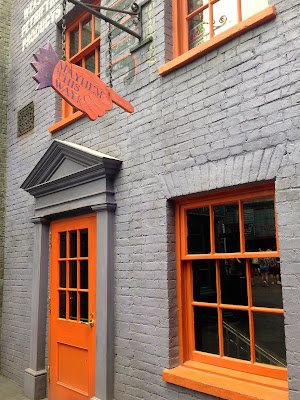 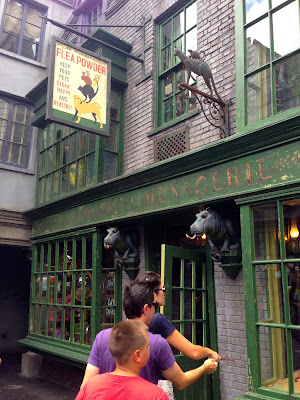 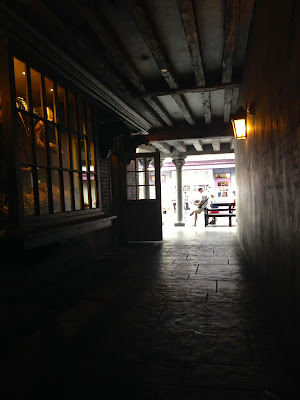 Post ice cream I headed over to Men In Black Alien Attack and took the single rider line for a quick spin. My score was pretty good - certainly better than anyone else in my car that I saw - but somehow I completely missed the instruction to press the red button. If I remember correctly that would've netted me like 100,000 points. FAIL.

From there I walked around through the remaining lands; I pondered doing the Terminator show but the next one wasn't for 20 minutes and I wanted to get over to Islands of Adventure. I booked it over to the opposite gate and went straight to Hogsmeade for one last ride on the Hogwarts ride (this trip was brought to you by the single rider line).

Time was getting short, so I backtracked to the front of the park and the main gift shop where I had been promised a coupon book. I collected it from a very nice cashier but the book turned out to be basically useless; all restaurants and waived club covers, no tickets or gift shop discounts. Oh well. I had already decided to buy a stuffed animal of Hagrid's dog for Pat's niece, so I went ahead and did that and left the park.

I had time for one last trip to the sushi place at CityWalk (Pat doesn't like sushi so I take it where I can find it) before I caught a cab back to my hotel, grabbed my bags, and headed to the airport. Thanks to storms in Baltimore and then storms in Orlando, my flight took off 2.5 hours late and I could've stayed at the park for longer, but hey. Better safe than sorry and all that.

And there you have it! My trip to Universal Studios Florida. The summer crowds weren't conducive to getting a ton done, but I knocked out everything that was important to me. I very much enjoyed the experience and there are particular rides that I would love to have another go at.

I just didn't get that feeling, you know?

You know. The feeling you get when you're at a Disney park. You don't have to be doing anything, really. You just stand there and look at the castle, or Spaceship Earth, or hell, all of World Showcase, or the prayer flags outside Expedition Everest...

Maybe it's a matter of familiarity. After all, I've made enough trips to WDW that I know what to do and where to go when it's raining or crowded or hot or cold. I know my favorite things. I've been to Universal before, but I've never given it the same attention Disney gets.

I came closest to the feeling at Universal in Diagon Alley. Even as a lukewarm Harry Potter fan, the attention to detail and immersive environment was beautifully done. But aside from that - even in Hogsmeade - nothing at Universal touches Disney for me. Is it nostalgia? Prejudice? I don't know. But I know that while I CAN. NOT. WAIT. For my next Disney trip in November, I'm cool to wait on Universal. I'll definitely jump on it if a trip falls in my lap, but I don't have the same Disney need.

Who else has been to both? What are your thoughts on the matter?

Anyway. That completes this trip report. MOSTLY. Stay tuned in the coming weeks for food reviews!

Jenn is running the 2015 Marine Corps Marathon for the Diabetes Action Team. Will you help her earn her bib while fighting diabetes? Click here to make your tax-deductible donation.
Don't forget, you can follow us on Twitter @fairestrunofall. To see how our training is going, check out Jenn's dailymile here and Moon's dailymile here. If you have any questions for us, leave a comment or email us at fairestrunofall@gmail.com. See ya real soon!
Posted by Jenn at 8:21 AM