In Which Jenn Is A Poor 5K Recapper & Great Balcony Viewer

So, I don't know, I feel like a should recap all my races, even if they weren't that exciting. With that in mind, I give you: the 2015 Tessitura Network 5K, which is held annually during the conference I attend.

You may recall that last year's went great. This year's? Not so much. Oh, it wasn't that bad. It just wasn't awesome. Part of the problem may have been the 14 miler I knocked out a few days previously followed by NO rest days, but I followed a similar model in 2014 and it turned out great, so...

Anyway. The race started in the early Orlando morning where it was already hella hot and humid - no surprises there. The course was along the back nine of the resort's golf course, which was perfectly pretty and nicely lined with trees and the occasional lake, but not particularly stimulating once you got over the perfection of the lawns. Props to the race team, though, which provided several water stations along the course, not always a given during such a short distance. We were also offered bottles of water and cooling headbands at the start and granola bars at the finish, which was nice.

Billed as a fun run, the 5K here is pretty informal; bibs are given out and "times" are taken, but there are no chips so everyone is judged based on the same gun time even if you don't cross the start line immediately. I ended up with a time around 32 minutes according to them.

I dunno, guys. I know this is a seriously lackluster recap, but as far as I was concerned it was a seriously lackluster race where performance is concerned. I was just tired and not really feeling it. BUT. It did give me the chance to test my new Marathon Motto: "You don't need to walk, you just think you need to walk." I only walked at the water stations even though all I really wanted to do was quit and go back to bed. So there's that. 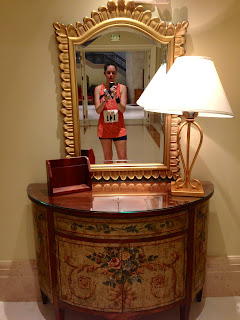 This is a terrible recap! I need to make it up to you somehow. Um... here are some shots of the view I had from my balcony! At various points during the day you could clearly see Spaceship Earth, the Downtown Disney hot air balloon, the Contemporary, and I THINK Space Mountain - one night I watched the fireworks. In addition, the Orlando Eye and Fun Spot and even Universal Studios could be seen. 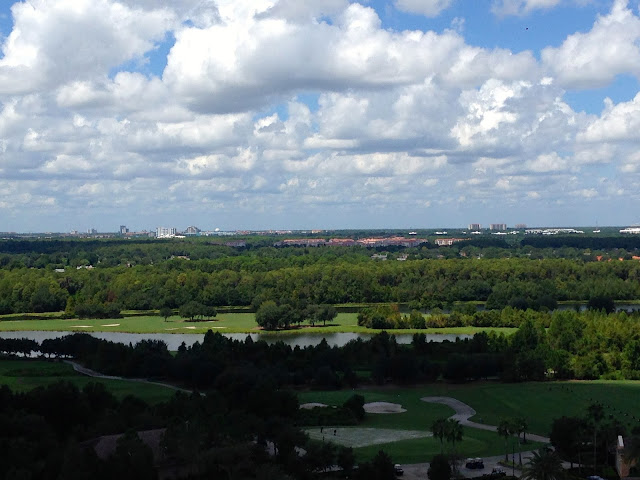 Hands down the best, most comforting view I have ever had from a hotel room. 5K idea: run back and forth along the balcony until you have achieved 3.1 miles. IT COULD WORK LET'S DO IT!

Jenn is running the 2015 Marine Corps Marathon for the Diabetes Action Team. Will you help her earn her bib while fighting diabetes? Click here to make your tax-deductible donation.
Don't forget, you can follow us on Twitter @fairestrunofall. To see how our training is going, check out Jenn's dailymile here and Moon's dailymile here. If you have any questions for us, leave a comment or email us at fairestrunofall@gmail.com. See ya real soon!
Posted by Jenn at 8:24 AM