In Which Jenn Recaps The National Capital 20 Miler

Remember how well my 20 mile practice run for the Marine Corps Marathon went last year? I did it in 3 hours and 33 minutes! Still, spending that kind of time on the treadmill wasn't exactly my all time favorite thing, so for this year's training I elected to sign up for the National Capital 20 Miler, a perfectly portioned and timed race along the C&O Canal. Based on last year's time and my recently acquired PR for the half, I decided to shoot for 3:30. Pretty doable, right?

Okay, so. This one kinda blew, guys. Like, Marine Corps 17.75K levels of suckage, only without all the hills to make sense of the suck. Maybe I didn't fuel properly? Maybe I didn't hydrate enough before the race? Maybe I didn't taper enough? Or too much? SOMEBODY TELL ME.

Anyway. The race was conveniently located less than 15 minute's drive for me, so I skipped the schlep to Arlington for advanced packet pickup in favor of doing morning-of. (This isn't my usual preference but the time sink of driving to Arlington would've been considerable). Worked out fine - I, along with many others, got a little confused about the multiple parking lots, but we found a guy who knew what he was doing and followed him to the race start. I grabbed my bib, put my new tech shirt in my car, and set myself up for the run. 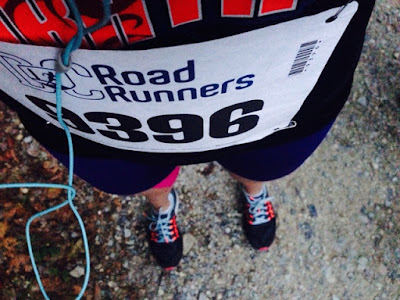 The race started pretty promptly at 7am and everyone crossed around the same time; there were no corrals since there were only a little over 100 runners. My main concern was not to go out too fast - say, keep it around 10:20, 10:30 or so. When I clocked my first mile at 11:01, I knew this was not going to be my day.

And it wasn't. If I remember correctly my fastest mile was, I don't know, 10:46? Not terrible from an objective standpoint, but compare to my Parks Half split times two weeks ago and you'll see why I was not pleased. By mile 9 I had taken my first walk break, and I try not to do that outside water stations. By mile 12 I was hurting. By mile 14 my morale was really dipping. By mile 17 I was walking every third of a mile or so and NOT EVEN CARING.

Also not great for the morale: the course was a true out and back. That is: run ten miles, turn around and go back the same way you came. Which meant that you got to watch all the people who were already at the turn around pass you by. And then you turn around yourself and you're like I'VE ALREADY SEEN ALL THIS. Also, I KNOW EXACTLY HOW LONG UNTIL MY NEXT WATER STOP AND IT'S NOT FOR LIKE THREE MILES WHOSE GREAT IDEA WAS IT TO SPACE THEM OUT SO MUCH HUH???

It wasn't all bad, though, I swear! Although the water stops were not as frequent as I would have liked, they did offer Clif Shots and orange wedges at I want to say three stops, which was great. And the scenery did have its good points, even if I had to look at it all twice. The C&O Canal has preserved some of the locks and lock station houses, and you could see the Potomac sometimes too. And regardless, at the end I had finished 20 miles! Yeah! Let taper time commence! 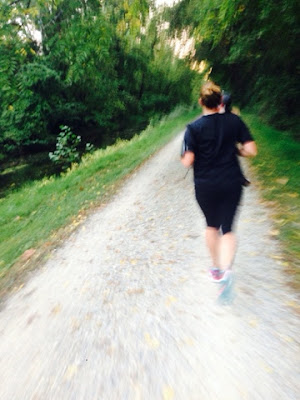 My race finish was lackluster - I crossed the time chip pad, grabbed some water, and went straight to my car and home. 3:54, guys. 3 friggin' 54. Ugh. I was not happy.

Some of it may have been the stuff I mentioned above - I messed something up in my fuel or hydration or just ran too fast in the previous weeks - but I'm gonna have to place some of the blame on my sneakers. Guys, I think Road Runner Sports made a mistake putting me in neutral shoes. I hurt in all sorts of new ways during and after that race - my hips, the base of my spine, both knees, my ankles. In the Brooks Ravennas, my isolated knee pain went away, In my new Nikes, as adorable and well-fitting as they may be, I can't seem to go past half marathon distance without incurring pain in a wide variety of areas. Not good. Not good.

My plan therefore is perhaps a bit risky, but I'm going to buy myself a pair of Ravenna 6s and see how they feel. Assuming nothing feels wrong, they'll be my marathon shoes. Once Wine & Dine is behind me I'll regroup, maybe do another fitting. We'll see.

I'm thinking the 2016 National Capital 20 Miler might have to be a redemption run.

Let's play Negative Nancy! What was your worst race ever?

Jenn is running the 2015 Marine Corps Marathon for the Diabetes Action Team. Will you help her earn her bib while fighting diabetes? Click here to make your tax-deductible donation.
Don't forget, you can follow us on Twitter @fairestrunofall. To see how our training is going, check out Jenn's dailymile here and Moon's dailymile here. If you have any questions for us, leave a comment or email us at fairestrunofall@gmail.com. See ya real soon!
Posted by Jenn at 8:46 AM