So I'm, like, a full 24 hours late on this week's Kill/Refurb/Marry. No grand excuse; I was on vacation and I forgot about the monthly blog hop. I have had this happen before and just let the month slide, but NOT THIS TIME. Not when we're talking Disney Mountains!

But first, a question: when we say Disney Mountains, do we mean that in the literal sense; namely, do we mean the traditional triumvirate of Space Mountain, Splash Mountain, and Big Thunder Mountain Railroad found at Disney parks worldwide? Is Expedition: Everest eligible, being as it is subtitled a mountain?* Does the Fantasmic stage count?** Looks pretty mountainous to me.

I'm sorry! I know it hurts. But BTMRR, while adorable and magnificently themed, is a glorified kiddie coaster. (Never mind that both Moon and my mother find it terrifying; they are wimps, wimping along wimpily. ;) Because of Moon's aforementioned terror, I did not experience Disneyland's BTMRR during our Tink trip, so maybe it's a little beefier? 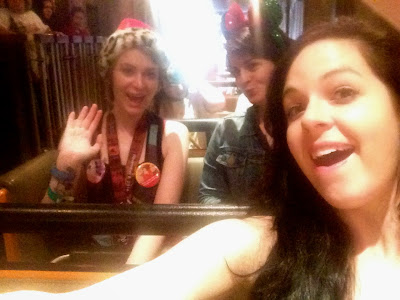 Disneyland's Space Mountain has music and lights and an overlay and - this is important - CARS YOU CAN GET INTO AND OUT OF WITHOUT FALLING ON YOUR FACE, EXPOSING YOUR UNDERWEAR, OR OTHERWISE LOOKING LIKE A RAGING IDIOT. I want the MK's version to have cars that don't make me look like a raging idiot! Jenn is running the 2015 Marine Corps Marathon for the Diabetes Action Team. Will you help her earn her bib while fighting diabetes? Click here to make your tax-deductible donation.
Don't forget, you can follow us on Twitter @fairestrunofall. To see how our training is going, check out Jenn's dailymile here and Moon's dailymile here. If you have any questions for us, leave a comment or email us at fairestrunofall@gmail.com. See ya real soon!
Posted by Jenn at 8:50 AM