JENN: Did you run last week after our collective week of rest?

MOON: Once?? I will not bore the internet with my tales of working FOREVER ALL THE TIME. I know that you ran, though!! ❤ 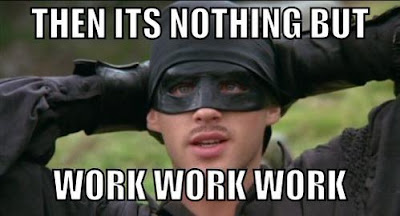 JENN: Hey, once is better than nothing!

Yup, but very gently - I did four 5 mile runs a very easy pace indeed. Pleasant, but not very rigorous. To a purpose, though, as I was prepping for the Parks Half Marathon on Sunday. More on that later this week. But... SPOILER ALERT: Nailed it!

MOON: Haha, yay! And! You got to do it on a beautiful morning. I was seriously jealous.

JENN: It was indeed a great day for running! Not so much for standing around, though; I was so glad I asked Pat to bring me a sweatshirt at the finish. Plus my finisher's medal doubles as a bottle stopper, so there's that.You signed up for anything yet?

MOON: Umm, no? No. My vision for the future isn't reaching past the end of the day right now. O.o November, though! I know there's a race I'll do then.

MOON: It's not going to happen. I'm way too busy.

JENN: Awww. Well, we'll have to find one to do together!

- Elbowglitter is egalitarian about speed.
- Fairytales & Fitness explores the running journal.
- Disney by Mark calls out paid abuse of the Disney ADR system.
- The Main Street Gazette mourns the announced loss of the Osborne Lights. :(
- And Sparkly Ever After is similarly saddened over the impending departure of Mulch, Sweat & Shears.
- Disney Nerds considers the cost of Disney park admission around the world.
- The Disney Tourist Blog looks ahead to Halloween.

Jenn is running the 2015 Marine Corps Marathon for the Diabetes Action Team. Will you help her earn her bib while fighting diabetes? Click here to make your tax-deductible donation.
Don't forget, you can follow us on Twitter @fairestrunofall. To see how our training is going, check out Jenn's dailymile here and Moon's dailymile here. If you have any questions for us, leave a comment or email us at fairestrunofall@gmail.com. See ya real soon!
Posted by Jenn at 8:37 AM