In Which Jenn Returns To Busch Gardens Williamsburg

Hello, humans! Last Sunday Pat and I ventured to Busch Gardens Williamsburg for their last regular operation day of the year. Elizabeth and I covered this park a couple years ago, but since it's been awhile I figured I'd pop in with my impressions. Let's roll.

Step one: always try to go on a gloomy, slightly rainy day. This, combined with it being the day after Halloween and a Sunday, meant that we walked on to almost everything. It was awesome.

Know before you go: Busch Gardens is similar to Universal Studios in that it does not permit you to bring any kind of bag or unsecured items into line with you. Unlike Universal, there are no free lockers, although if I remember correctly the fees are fairly low. Also unlike Universal, however, there are no metal detectors, and you can bring your phone and such with you if you've got to firmly attached to your person. I employed my very sexy plastic-bag-pinned-inside-my-sports-bra method of phone and credit card storage and it worked just fine.

For Pat and me the priority was 100% roller coasters. Our first stop was at one of my favorites, Apollo's Chariot. The first hill is pretty intense and is not for the faint of coaster heart, but your reward for braving it is a LOT of super-swoopy air time. It's also a pretty long ride, so if you do find yourself facing a line the payoff is decent.

Not so for the newest coaster, Tempesto, which is right next door. Don't get me wrong, it was fun, but it lasted all of 40 seconds. It features some unique boomerang-style action where you zoom back and forth along the same bit of track, but it's not so revolutionary that I'd wait a long time for it - and since only a single train can ever be operational, lines are bound to get ridiculous on a busy day.

From there we hit Verbolten, which I LOVE. In fact, despite its relatively tame ride experience, it may well be my favorite ride in the park. It features themeing and backstory that, while not quite up to Imagineering standards, come darned close to Disney style. And the little bit of a trick track? SO MUCH FUN to surprise people with. (Unless you're with Pat, who's like, "I kinda thought that would happen when we [redacted due to spoilers]." Savvy people are no fun.)

On to Alpengeist! Has this coaster gotten more boring or is it just me? It's got a lot of rolls and loops, but the drop is nothing. Boring. Rattly, too. Next!

Ah, but Griffon. Griffon is a dive coaster, a veritable clone, if I understand correctly, of Sheikrah (or whatever) in BG Tampa. The main drop is totally vertical, and they dangle you over the edge and let you ponder your life decisions before you fall. Sounds scary, but it's actually a very smooth ride. Highly recommended, but make sure you get in line for the front row; you just don't get the same experience otherwise.

Last and, well, least: the Loch Ness Monster. The first and possibly only coaster with interlocking loops, this coaster is old and a little rough therefore. The tunnel feature is fun but otherwise it's prety no-frills: drop, loop, tunnel, drop, loop, done. Eh.

We also rode a few non-coaster rides, including the sky ride (Pat lamented its passing at Disney parks), the spinning swing ride (if it rains, DEAR GOD WATCHING FOR FALLING WATER WHEN YOU TILT), and Curse of DarKastle, a 3D-film-plus-dark-ride that I found a lot more impressive ten years ago, but whatever. If you're curious: it's like Universal's Spider-Man ride, only with Mad King Ludwig. Since the ride was a walk on, we missed the explanatory backstory movie in the pre-show room, and Pat noted that without it the story line is pretty disjointed. Some neat effects, though.

All the water rides were shut down for the season, including Roman Rapids, the Le Scoot log flume, and the Escape from Pompeii "splash down" ride. Nothing has replaced Europe in the Air in Ireland, sadly (RIP, Corkscrew Hill.) Additionally, all the shows had been temporarily displaced by Howloscream shows. We caught the end of the Casket Club revue in Das Festhaus and I found it to be about the same as last time. I wouldn't go out of my way to see it but it's reasonably entertaining if you're there to eat anyway.

Speaking of eating: we didn't get a whole lot in the way of food, but here goes: pretzel sausage is bland; pretzel nuggets are buttery but charging extra for even a single sauce is mean; sometimes you get your coffee free if it's the last day of the season and the till is broken; you can get a Disney-esque turkey leg in French Canada and according to Pat it's amazing; the turkey sandwich in Das Festhaus is only okay but the house-made paprika chips are a nice touch.

We skipped most of the other shows, including the famous Fiends (PUT ON SOME CLOTHES, HOT GUY), but we did stay for the most important one: The Secret Lives of Predators! The demonstration is short and the acting is kinda dumb, but the animals showcased are ADORABLE. There was a rat, a buzzard, my buddy Cupid the barn owl, a Harris hawk, the world's most eager fox, and of course a wolf (we had Odin). Pat and I were unable to reconcile our beliefs on Cupid; he feels strongly that barn owls are terrifying-looking while I think they are the cutest type of owl currently provided by Mother Nature. If we ever break up, this will no doubt be the catalyst. 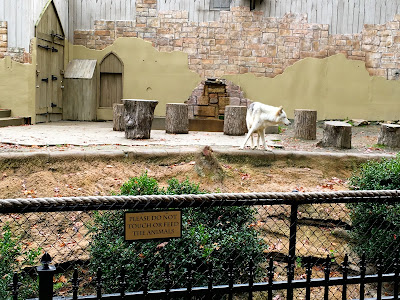 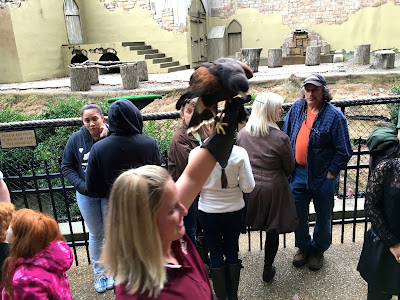 Unfortunately due to scheduling restraints and generally tiredness we had to leave the park at 4pm, a disheartening six hours before closing. It wasn't too bad, though - we'd knocked out every ride we'd wanted to hit and were escaping just as the Howloscream crowds were starting to show up. I'm a little bummed to have missed the scare zones, which are often nifty and atmospheric, but NOT AT ALL UPSET to have bypassed the haunted houses. Once is enough for me on that front.

This was Pat's first trip to BGW. His thoughts? "Worth driving the extra hour past Kings Dominion. [Me: I've never been to Kings Dominion.] Don't bother. This is way better."

So yeah! I don't know if I'd make a massive trip to Busch Gardens by itself, but if you're in the area it's definitely a huge step up from your average Six Flags-or-similar experience. And it might be worth a longer trip if you'd be into nearby Colonial Williamsburg and battlefields. If you do go - take me with you!

Have you been to Busch Gardens Williamsburg? What are your thoughts?