After our late night night, the plan for the morning after the after party was to sleep in. That plan was almost interrupted by housekeeping at 8:45am; I literally rolled out of bed, snuck the "do not disturb" sign onto the door handle behind the housekeeper's back, and returned to slumber. Crisis averted.

ELIZABETH: My brain, of course, decided that I needed to wake up every 20 minutes or so from about 8am on, because apparently that is my punishment for forcing it to stay up til the wee hours. At least the curtains in our window blocked the vast majority of the light.

We got up for real around 10:15am, and I ate some leftover race snacks while Elizabeth showered. We dressed, ran out the door, and caught a bus to the Animal Kingdom.

Having not had the luxury of post-race snacks, Elizabeth needed sustenance, so we stopped by Flame Tree Barbecue for ribs. They came with cornbread and beans and she let me try whatever. I found the ribs to be acceptable but the cornbread was really good, enhanced with cheese and jalapenos. Nice.

ELIZABETH: I was so hungry, everything tasted amazing. My only complaint is that Disney generally provides portions that are a bit too large for little old me to completely finish, and we were surrounded by some very hopeful ducks who would be HAPPY to help us, but of course you're not supposed to feed them. Sigh. 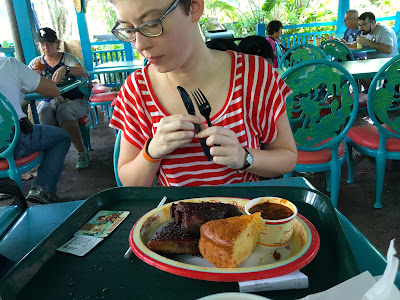 From there we booked it to the noon showing of the Finding Nemo musical. I enjoy it - "Go With the Flow" is an especially great song, obviously - and the puppets are amazingly well done (MR. RAY!) but it definitely can't match my incredible love for Festival of the Lion King. There's a little part of me that wishes we just saw FotLK twice.

ELIZABETH: While I think they did an excellent job trimming down the story to fit within the (I think 40-minute?) time frame, I'm a little sad that they cut out the part with the whale-speak. "COME BAAAAAAAAAAACK!!!!"

After the show we were in the neighborhood, so why not check out the Expedition Everest single rider line? I think it posted a wait of something like 10 minutes, but we were on a train in less time than that. "Is this your first time on the ride?" the girl next to me asked. HA!

Also in the area: Maharajah Jungle Trek. Time for some tiger-spotting!

ELIZABETH: We got a surprisingly good view of them, too, considering that it was the hottest part of the day. Tigers are awesome. :) 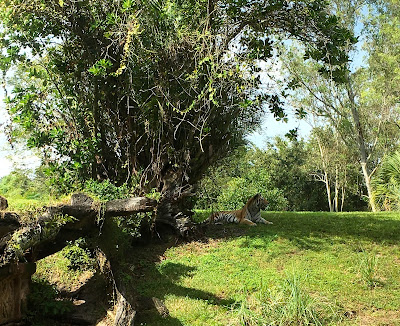 Post Trek we backtracked to Dinosaur. The wait was posted at 30 minutes but it was actually more like 10. We did some pretty solid work with the photo op, I think. 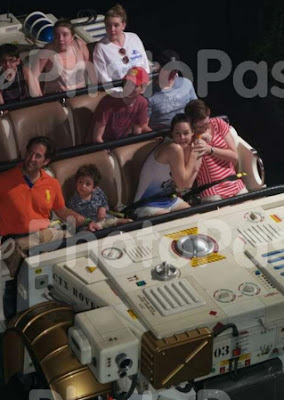 A quick pit stop for frozen bananas and we were heading out of the park and over to the Studios. You know that sinking feeling you get when you're watching the bus you want pulling away? I hate that feeling. But we were in luck; the traditional sideways logic of the bus schedule sent us another one in short order.

ELIZABETH: Can anyone eat frozen bananas without thinking of Arrested Development anymore? I know I can't.


We had a fair amount of time to kill before our first FP+ slot opened up, so we wandered over to Star Tours. The wait was posted at 30 minutes, but it wound up being maybe half of that. We got Storm Troopers, pod racers, Admiral Akbar, and the Death Star. I was NOT the rebel spy this time. I guess it's a transitional title.

It was then time for our Rock 'n Roller Coaster FP+, and we were glad to have it - the posted wait if I remember correctly was at least 90 minutes if not longer. As we passed into the "recording studio" waiting area, we had an amusing conversation with the CMs about their autopilot spiels. "Go ahead and scan your band. I'm going to forget you did and ask you to do it again in like two minutes; make sure you tell me no." Forget the first song we got, but the ride ended with "Love in an Elevator" and that made me happy. LIVING IT UP AS YOU'RE GOING DOW-OW-OW-OW-OW-OW-OW-OW-OW-OWWWWWWN 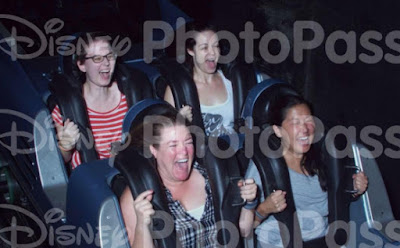 Then it was time for our Tower of Terror FP+, a reservation I had made for Elizabeth because I love her but ACK ToT ACK ACK. I dunno, though; all the times Pat made me ride it in January must have desensitized me to a degree. I was still apprehensive but much more resigned than anxious. I attempted to maintain absolute stone face for the picture but was lucky to get it as I kept involuntarily laughing during the ride itself. Okay, ToT, you win this round. WE'LL SEE HOW I FEEL NEXT TIME. 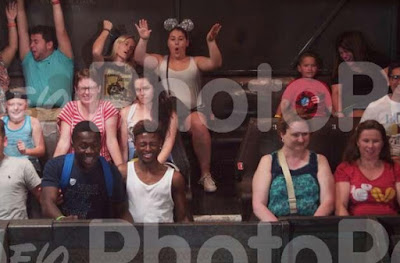 Multiple attempts were then made to find a bar for a drink, but Tune-In was packed. Instead we wandered through a couple gift shops before using our final FP+, good for another ride on Star Tours. This time around we got the Storm Troopers to start again, but everything else was new: Wookie planet (yessss), Leia, and Boba Fett to finish it out.

ELIZABETH: I just want to take a moment to gripe about how I seem to be getting more sensitive to 3D motion-simulation rides as I get older. Most rides don't bother my AT ALL (see: roller coasters), but recent years, I find myself getting a headache after Star Tours-type rides, and then I have to take it easy or risk feeling extremely ill.  Curse you, biology!! (End rant)

Backing up to the hub, we were frowning studiously at the 40 minute posted wait time for the Great Movie Ride when a familiar figure called out to us: it was Kim! We talked to her a bit about her experiences during the race and other topics, during which it was revealed that Kim, your husband is HILARIOUS. After swapping a couple stories they headed off to the Indy Stunt Show while Elizabeth and I considered our next move.

Plans to see Beauty and the Beast were thwarted by a capacity crowd (has it always been that popular?). Instead, we picked up a Fantasmic FP+ and then put our names down for a table in the Brown Derby Lounge. More on this in a separate review, but let it be known it was a very enjoyable experience.

After that I was not quite sated, for I had been unable all day to kick my craving for a carrot cake cookie for the Writer's Stop, a delicious, frosting-filled item I had not had in YEARS. This trip, I succumbed - the CMs let me slip through the Osborne Lights blockage just to grab my treat. It was huge and sugary and terrible and wonderful and I regret nothing. ALL THE FROSTING ALL THE TIME!

ELIZABETH: And I got to have some of it, wheee!

We caught the 7pm showing of Fantasmic next - and here I must admit to being annoyed. We were admittedly at the end of the time slot for return, but we still made it. How is it that pretty much the entire stadium was already filled up? Oh, sure, there was room at the far end, but I knew how that ended after the show: in a crush of humanity, all of whom walk at quarter speed. FP+ for shows, why do you even exist?

The bleachers had a nice view if not a close one, happily, so we just settled there. The rather loud family next to us was a trifle annoying, but eventually they settled down and we were able to enjoy the show. Being as we were already up top, we were also able to book most of the way out of the stadium before getting caught up in the crowds. Altogether a primarily successful venture.

ELIZABETH: I also find Fantasmic one of the more interesting light shows to watch, since it has more of the story line than the others. Just once, I want Mickey's power of imagination to NOT BE ENOUGH, though...

And then it was time: time for my final turn through the Osborne Family Spectacle of Dancing Lights. I had thought that by timing it after the first Fantasmic, the larger portion of people would be heading out of the park and we'd have space, but I was wrong - it was v. crowded. Also not as many bars and things as last year? But still beautiful and wonderful and I'm going to miss it SO MUCH. 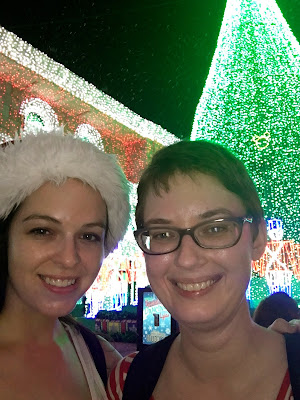 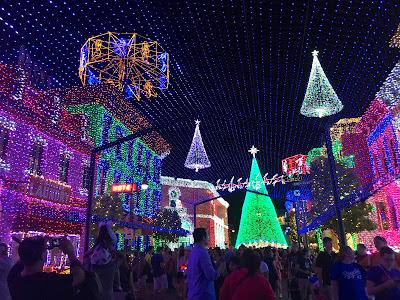 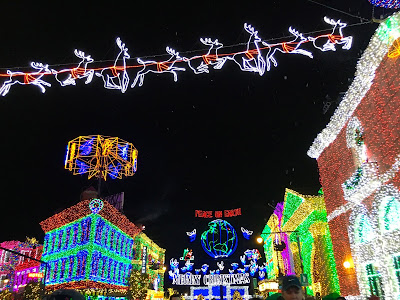 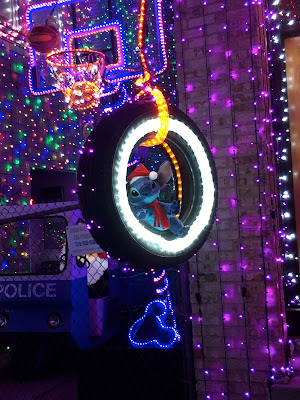 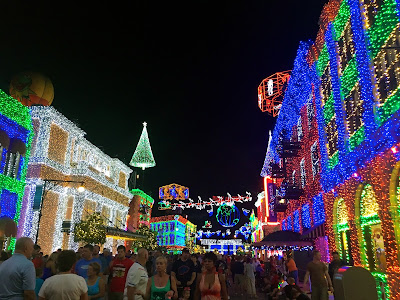 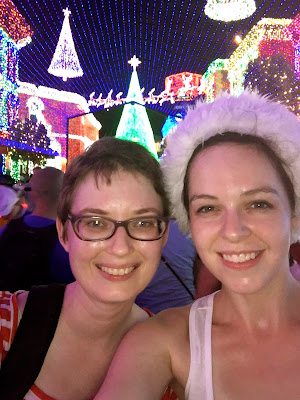 We danced around and sang to the light show, including my favorite, a rendition of "What's This?" from The Nightmare Before Christmas. Eventually, though, it was time to let go. "One more song," I kept saying to Elizabeth, and eventually I meant it. I left the lights behind with a heavy heart.

On the way out the Great Movie Ride listed a 30 minute wait, but as I was curious to see the TCM changes we decided to take a chance on it. We did get in a bit earlier, as they had room for two groups of two - but something when the CM pulled us forward, Elizabeth missed it? I got to the loading station and turned around and she was gone. Happy ending: the CM went back in and grabbed her and we were reunited thusly. In the front row, no less!

ELIZABETH: Hey, I was watching Humphrey Bogart and Lauren Bacall on the preview screen. You try and pay attention to anything else at the same time! 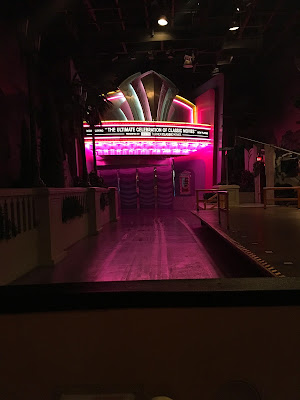 The current changes are pretty minimal, but I like were it's heading. A lot of the live narration has been replaced by a canned Robert Osborne track, and while some might find this to be a downgrade I think it makes sense; after all, we know he knows what he's talking about. There were also new clips in the final clip show, and I think they may have spruced things up a bit? Let's take it further, guys: new scenes, please! P.S. We got the gangster. :(

After that we headed out of the park and caught the bus to Pop. Once back in our room I readied my running clothes for a morning run before typing up my notes and uploading pictures and such. Elizabeth found Mulan on ABC Family and we watched that glorious, glorious movie for a bit before drifting off to sleep.