On this particular trip I did something I have never done before at Disney: gotten up early for a mere training run. But what with the Quarter Marathon and all I felt I simply hadn't logged enough mileage. I wanted to cram at least a couple more in there.

And so I dragged myself out of bed around 7am and headed over to Hourglass Lake, the figure-eight path between Pop and Art of Animation. A couple loops later I had knocked out about three sweaty miles; I would like to have gone further but I still needed to shower and finish packing. 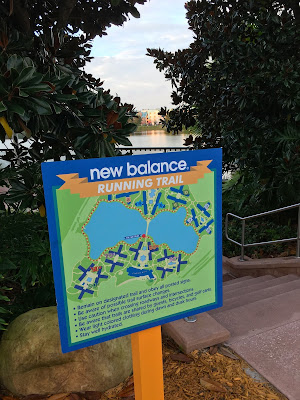 Aforementioned morning to-dos done, we dragged our luggage to bag check. This took forever because for some reason the lady simply could not find Elizabeth's name in the system, which was certainly exciting. Elizabeth already had her boarding pass so we wound up with both our bags under my name and that turned out fine. I also dropped off my carry-on with luggage services while Elizabeth checked out of our room. :(

ELIZABETH: Yeah, no idea what happened there. It made me a bit nervous for the flight (what if they somehow bumped my ticket?!?!), but everything was fine.

Finally ready to go! We hopped one of those weird reticulated buses to the Magic Kingdom and were through the gates by 8:40am. Despite MEMH being in place, some parts of the park weren't open. Fantasyland was available, however, and we skipped over the miles long Peter Pan line in favor of it's a small world. This also had a line. A short line, but still: a line. For it's a small world. In the morning. Weird.

A few steps away from it's a small world, Elizabeth realized she'd forgotten her new Everest hat on the ride. At this point we had entirely cleared the area, though, so we resolved to ask guest relations about it later.

Oh, and not sure where to drop this information, but: I got a million compliments on my dress all day. People make fun of me for being on the Hot Topic mailing list, but their Disney stock is a force to be reckoned with. You should definitely check it out, especially for Disneybounding. 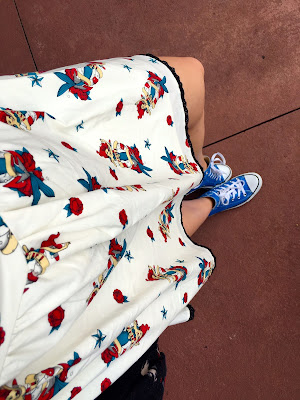 It was way past breakfast time, so we booked it over to Sleepy Hollow in Liberty Square for a ham and egg waffle breakfast sandwich - only to discover they don't sell it anymore. Boo! We settled for a Nutella and fruit waffle instead. This was acceptable, but why does Disney make finding a good counter service breakfast so HARD?

ELIZABETH: It's a real failing. I refuse to believe that people wouldn't buy it. Who doesn't love breakfast food?? 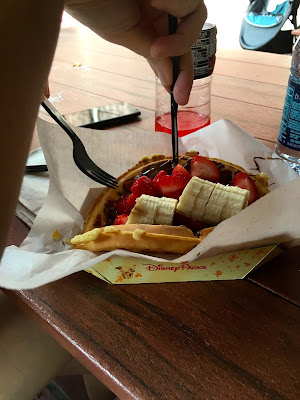 By this point our first FP+ slot had opened up, so we backtracked through the hub and disappeared into the cool darkness of Space Mountain (guys, it was already SO HOT). Right side and front this time, so not quite as good, but still fun.

Then it was back through Liberty Square and into Frontierland for our very welcome Splash Mountain FP+. Temperatures being what they were, the line for this was CRAZY. Sometimes those FP+ times really do work out! We got the front row and were splashed pretty good, but it was so hot outside that we were both dry in little more than an hour.

ELIZABETH: I almost wish they didn't have the ride so well air-conditioned, though, because we weren't overheated anymore by the time we got to the big drop, and it wasn't as refreshing.  It felt good once we were back out in the heat, though.


We had some time to kill before our next FP+ (new refrain of my life), so we browsed the Christmas shop and then Memento Mori. I put some serious thought into buying a Madame Leota shirt but ultimately decided it wasn't worth the price.

Also on the docket were the Main Street shops, which we wandered through before ending at guest relations so that Elizabeth could inquire after her hat. Meanwhile I roved the candy store, increasingly frantic at the complete lack of Goofy's Candy Kitchen sour gummy worms anywhere on property. Do you not make them anymore, Goofy? Why not?! ;.;

Elizabeth returned, reporting no luck on the hat front, but she had been told to investigate at it's a small world again, which we did on the way out with no luck. But first: Seven Dwarfs Mine Train, my best FP+ get of the trip. So difficult to get on this ride without a million-year wait is it that it was only my second time. It's super cute but awfully short, no?

ELIZABETH: I seem to be a bit cursed with hats. I always lose them, but then again I don't wear them that often, which probably exacerbates the problem. I did find that the Mine Train was fun but rather short.  Nothing can live up to Everest, alas. 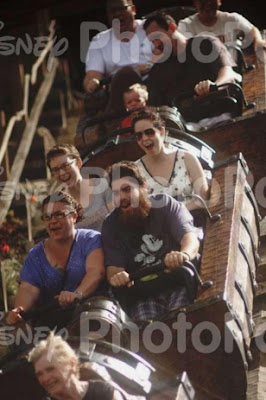 After the fruitless hat check it was time to go; we picked up the monorails to Epcot and were there by about 12:30pm. We made a quick stop in Club Cool before heading right into World Showcase for our last Food & Wine Festival snacks. The extreme heat was not encouraging, and we tended in the direction of cool items, which occasional breaks in gift shops just for the air conditioning. 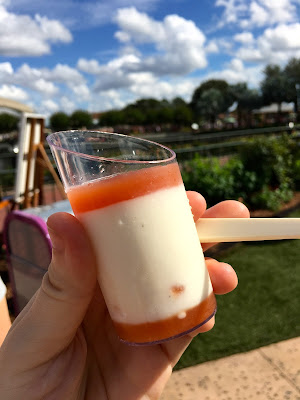 Our second item was the pineapple wine from Hawaii. Elizabeth found this to be entirely too sweet. I liked it well enough, finding it similar to a pineapple-tinged Reisling, but I can't say I'd want a whole glass of it. 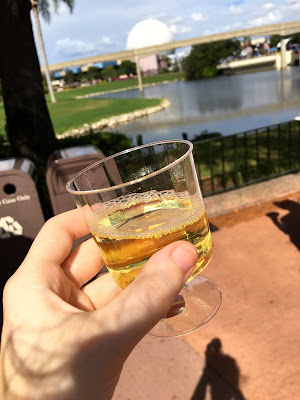 Next up I got another spicy hand roll from Japan and Elizabeth got the teriyaki steamed bun. I didn't taste this but if I remember correctly she liked it quite a bit.

ELIZABETH: Yep! I approved. I'm not very good at describing food experiences, but I was sad to not have it anymore once I'd eaten it.

We also made purchases in South Korea, where I grabbed the iCing sparkling grapefruit "rice brew" (so... sake?) I enjoyed so much last year. It was... okay. I found it a little cloying this time around. Probably wouldn't repeat it again. Meanwhile Elizabeth got raspberry wine and Korean barbecue short ribs; I tried the raspberry wine and found it a bit strong.

ELIZABETH: It was, though I do think pairing it with the short ribs was a good combination.

My very last food item of the trip was actually not a F&W Festival item but something I've been wanting to try for a long time: Tipsy Ducks in Love from China's Joy of Tea Stand. Cold coffee, tea, bourbon, and chocolate sauce, topped off with whipped cream. Whew! This was delicious but serious business on the sugar front. I finished most of it but I wouldn't recommend such a thing for everyone. 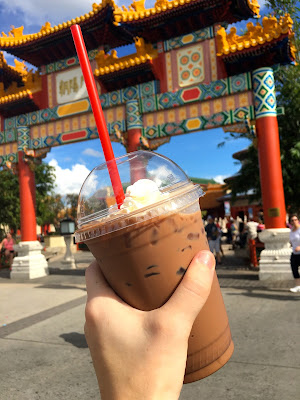 Our final order of business: our souvenirs! The Festival was selling a 4 pack of stemless wine glasses, all with the logo and all the same. They were kinda expensive alone, but split between two they were quite reasonable. We searched around a bit before finally locating them in the Festival Center. (Hello, Wonders of Life pavilion! It's been a long time!)

Then we had to head out. :( We grabbed a somewhat lethargic bus back to Pop and made it back just in time for our Magical Express bus... which was of course late. They're always late. Unless I'm late, I'm sure, in which case they are invariably on time.

And that's it. MCO's airport security line continues to be the WORST, but it was a pretty uneventful journey back. The Disney stores there don't have any sour gummy worms either. Heads up: the Southwest terminal is undergoing construction, which means that while eventually there will be great new food options, there are currently just less. Plan accordingly.

That's a wrap on this trip report! MOSTLY. (I still have two restaurant reviews to do!)

ELIZABETH: Woo! A Jenn-planned trip is great, as always. :)

Thanks for coming along on this journey with me - I hope you had as much fun reading it as I had writing it! I'll next be in WDW - very, very briefly - for the WDW Marathon. See you there!