The Fairest Trip Report Of All: Wine & Dine After Party Recap

I came into the after party a little earlier than last year because a) the course was half the length and even the delay couldn't quite eat into that lead and b) Elizabeth had my stuff, so I didn't have to go barrel my way into the changing tent and elbow myself some space. Seriously, any time you can avoid the changing tent, you are winning.

Meanwhile Elizabeth was no doubt doing much more exciting things that I'm sure she'll tell you all about now.


ELIZABETH: Haha, well I got some filet mignon from Canada and a meat pie at the Brazil kiosk (specifically avoiding foods I remembered Jenn said she wanted to try, because I'm awesome like that). Then I watched IllumiNations and rode Spaceship Earth by myself - and for some reason, it decided to duplicate my face and make it look like I have an identical twin during the part at the end where they show you what the future will be like. It was weird.

It took a little while to figure out how to get back in for the after party, but I ended up having to exit the park and then turn around and come back in, and they gave me the special yellow wristband, yay!

By that time they had turned some of the rides back on, so I rode Test Track and then decided to stake out a place to wait for Jenn, because my feet were tired. 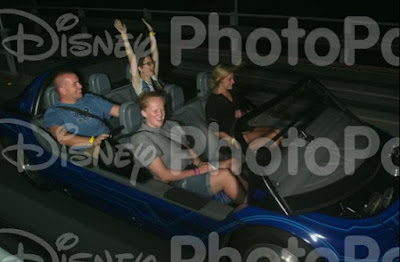 My first act was to swing by the little rentals shop hidden away far to the left facing Spaceship Earth, where a Cast Member helpfully gave me a bag to store my Powerade/snack box/etc. in. That done, I called Elizabeth and we met up in front of that bastion of meeting points that is our favorite geodesic dome. She handed me my stuff and I quickly changed inside the bathrooms by Test Track.

For Test Track it was to be! Last year it was raining all night to such a degree that the ride was down for the entire party. Better luck to be had this year! There was so minimal a line that Elizabeth and I were able to separately design our own cars. I am pleased to note that mine garnered a pretty solid score and was SO PRETTY to boot. JUST SO PRETTY. 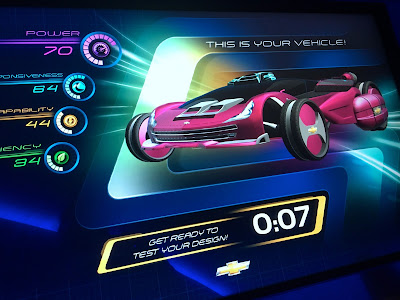 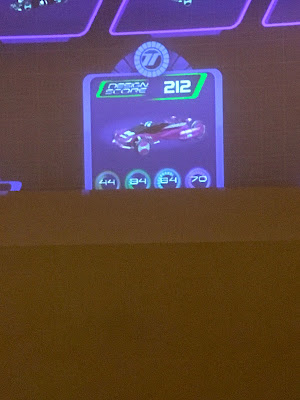 I really like the "build your own car" element, but anyone else kinda miss the old ride design...?

ELIZABETH: I do. I mean, the futuristic thing is kind of cool, but...the realistic former design was a lot more engaging, in my opinion.

Then, naturally, it was Food & Wine Festival time. Stop one: the Farm Fresh kiosk, where we snagged the bacon mac 'n cheese and cider flight. Although the mac had gotten mixed reviews based on what I'd read on the internet, I found it enjoyable, especially upon discovery that it was a tad spicy. Could've used a little more cheese, though.

ELIZABETH: It had cooled enough that eating warm food wasn't completely unappetizing, either! 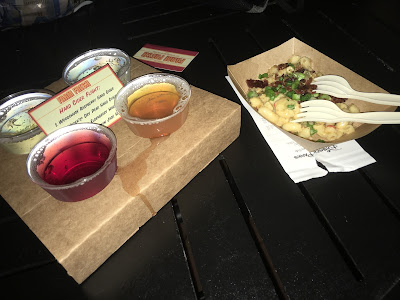 The cider flight was rather awesome if very sweet. It came with raspberry, pear, elderberry, and pumpkin ciders. The raspberry was the sweetest of the bunch; the pear was, well, pear cider, so not that exciting; I really enjoyed the elderberry, which was pleasantly dry without being sour; and the pumpkin was pretty intense, pumpkin-y but also darned sweet, like drinking bubbly pie. An enjoyable flight but not to be undertaken if you're not up for some sugar.

ELIZABETH: Mmmm, cider. I DO think it would have been good if they had been labeled, but deducing which one was which was fun.

Happily, I am almost ALWAYS up for sugar, and to prove it I marched on over to the Ireland booth and got us a warm chocolate pudding with Bailey's sauce. This was akin to eating an undercooked brownie, and as I am a firm believer in baked goods that haven't baked, I approve. It is not, however, a particularly unique entry. Would buy again if I really wanted some chocolate. 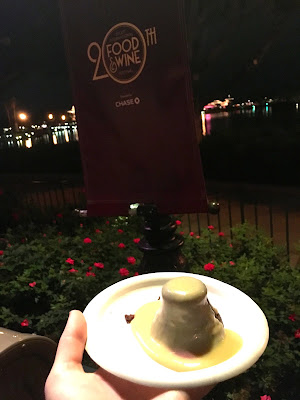 Actually, I think before we did that we stopped at Scotland for a smoked salmon potato pancake, so we did get some salt in there. Good stuff as always but what isn't good when there's lox involved?

Moving on again. We rounded the bend and stopped by Germany for bratwurst in a pretzel roll and the Riesling flight. The former was good but not as good as it could be - I could go for a spicier brat and a fresher, larger roll. Still, I am and no doubt will continue to be a sucker for anything in a pretzel roll. 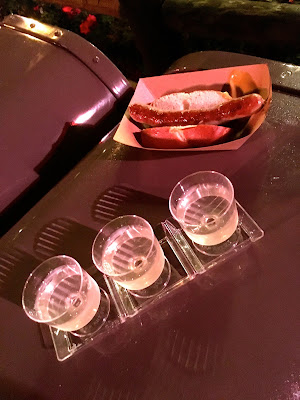 The Riesling flight included three sweet white wines, and thanks to the card I could list them for you now... except that as far as I was concerned they were all basically the same. Subtle differences, sure, but nothing you'd remember. Skip unless you really, really want some Riesling and are easing yourself into the idea of change.

ELIZABETH: Yeah, it could have been the psychological effect of them all being the same color, but... they tasted the same to me, too.

We were good on food by that point, but not on rides - we ducked into the Mexico pavilion and hopped a private boat on our search for Donald. Gotta love the after party for personal vehicles.

ELIZABETH: It was pretty awesome to be able to put my feet up, too :) 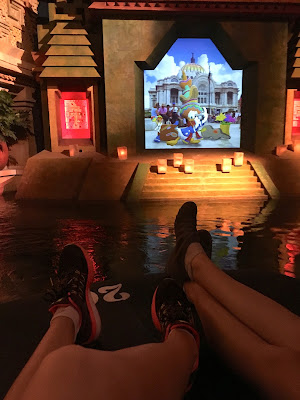 Next up: a spin on Spaceship Earth, which is always a welcome moment of respite. The ending animation is still fun and all, but I think it's time for an update, don't you?

By that point it was 3am, and the temptation to close down Epcot in an hour was strong... but we were tired and there was much to do the next day. We were lame and headed home.

ELIZABETH: Not lame - practical! Can you imagine how grumpy we would have been the next day if we'd had an hour less sleep?!

Tune in next time for more adventures in Disney's Animal Kingdom and the Studios!