The Fairest Trip Report Of All: Brown Derby Lounge Review

Last post of the trip report. :( Commentary from Elizabeth provided in red. Click here to read all the posts in this report. Onward!

Brown Derby Lounge, I hope you don't mind me telling you this, but: you were an accident.

Elizabeth and I were hot and tired that afternoon in Disney's Hollywood Studios. We were just looking for a bar that wasn't crowded. You - the little outdoor bar space attached to the Hollywood Brown Derby - had a line, but by that point we had given up. Turns out the line was just for the bar itself to grab a to-go drink, and when we saw a couple put their name down on a list for a table, we did the same.

ELIZABETH: I think that was the day after we had been in the park until 3am, and I'm pretty sure I was running on about 4.5 hours of sleep, so anything involving sitting was awesome. :)

Ten minutes later there we were at a hightop, perusing the menu. What happened to your champagne flight, Brown Derby Lounge? I really wanted to try it, but our server informed us that you didn't have it anymore. They did have a champagne cocktail, but it was awfully expensive for what I suspected would constitute a meager number of sips. So instead I went with the margarita flight. 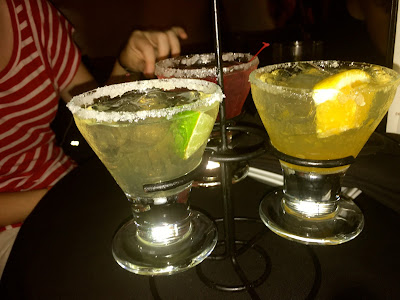 It was a pretty good substitute, I'll give you that. The margaritas in question were classic (salt rim), pomegranate , and mango (sugar rims), and they were all good and had a decent kick - although I think you could've had a slightly heavier hand with the tequila, you know? A more than decent kick would be very welcome. I would order this again if I were in a sugary mood... but I might just get a full size classic margarita. I do love me some salt.

Elizabeth got a Manhattan, which I'm sure she will tell you all about here.

ELIZABETH: I didn't feel like getting something sweet, and I associate Manhattans with classy old film noirs, which seemed appropriate for Hollywood Studios. That being said, it was a little on the strong side for the my personal taste, but this was more the result of me wanting to get a drink I'd only sipped once before and not a fault of the bartender's. If you like whiskey, it's a good choice!

We supplemented our drinks with the charcuterie plate, which the menu did not describe in any detail but we knew we were at the very least getting meat and cheese, and what more do you really need? We wound up with the assortment below, including hard, soft, and strong cheeses, an interesting assortment of cured meats, mustard, pickles, an unknown pate, and accompanying hard bread (I want to say it was garlic?). It was by no means exotic fare, being comprised primarily of exactly what you would expect on a charcuterie plate that you might assemble yourself at home - but I enjoyed it. The cheese in particular was great; the strong blue variety grew on me. 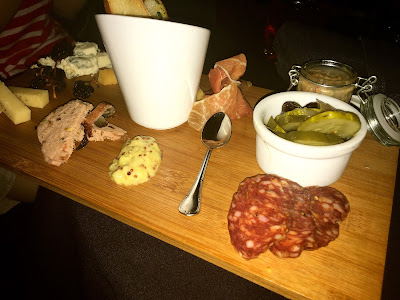 ELIZABETH: Yes, I thought they had a good variety, though I do wish they'd provided a list of everything on the plate. That being said, we could have asked the waiter, and trying to figure out what kind of pate we were eating was fun! Also, I'm pretty sure I remember there being olives, which I love and are necessary for any decent charcuterie plate, in my opinion.

Overall, well done, Brown Derby Lounge. I'm glad we stumbled into you. I would be gladder if you brought back the champagne flight, though. Whaddya say?

ELIZABETH: I would totally get a champagne flight!

Have you been to the Hollywood Brown Derby Lounge?