And now for the Briefest Trip Report Of All!

I began my whirlwind marathon weekend with a 7am flight. The airport was uncharacteristically empty, and since I didn't need to check any bags I waltzed through security and had a Jamba Juice smoothie in hand in short order.

My flight took off early, but landed half an hour late due to a brand new experience for me: two go-arounds. Conditions in the Orlando morning were foggy and it wasn't until attempt #3 that we managed to land. (I assume instrument landings are for special occasions only.)

I wasn't particularly worried about time, but I still booked it down to the Magical Express because booking is the only way I know. While on the bus I got a text informing me that my room was ready; all the same, I the moment the bus arrived at Pop Century I hopped into the check-in line to ask about an all-important late check out - which was given to me without difficulty. Shower ahoy! :D

From there I ran over to my room, which was in the '60s section per my request (I like to be near the main building). Surprisingly for a non-preferred room price it face inward, toward the kiddie pool, and was for some reason handicap accessible? I had a big king bed and a shower with a seat and a movable shower head. Unnecessary, of course, but having these things I rather liked them.

After changing and unpacking my running gear to make sure I wasn't missing anything, I grabbed a bus for the expo. By Saturday, I expected it to be pretty quiet, but I was WRONG. Traffic just getting in was crazy, and once I arrived I was met with hordes upon hordes of people. I saw tons walking around with half marathon medals on, prompting this question from me: why are you back??? Bib pickup itself was speedy - for once, NO ONE in front of me in line! - but when I entered Jostens Center and the exhibitor's hall it was back to bedlam.

My first act after picking up my marathon shirt was to attempt to have my Achilles taped at the KT Tape booth, but I was told the come back later as the line was INSANE. I wandered into the official merchandise tent instead, but as usual I left empty handed. The things I liked were either too expensive to justify or didn't come in my size. I was very jealous to see how cute this year's Dopey stuff was; last year's kinda blew. If only it didn't say 2016 I would've bought me a tank!

I took an exploratory, time-killing loop of the entire expo space before returning to the KT Tape booth, where I was turned away AGAIN as the line had kinda gotten out of hand with people not following instructions and coming in from multiple points (the booth staffers told me the expo committee had assigned them WAYYYY too little space for their line). So I set off again, perusing a few booths and considering and then dismissing buying things. In keeping with my trip type, I was trying to keep the wallet damage as low as possible.

While wandering I came upon a Garmin table in the Fit2Run section. I had forgotten my GPS watch charger and asked if they had one I could buy/borrow. The guy just straight GAVE it to me, which was amazing. He told me not to mention it to anyone, which unfortunately means I can't very well report this extraordinary customer service moment to corporate, but let his good deed be memorialized here.

Next I grabbed a few samples from Clif before checking out the New Balance booth, featuring runDisney sneakers. It seemed like they might actually have some in stock, but I once again talked myself out of any purchases. The Ariel model was pretty cute but why drop $125 on a running shoe that isn't the one I use?

Okay, back to the KT Tape booth! Where I was turned away AGAIN but I found the staffer I had originally talked to and she let me in since I had been patient. The wait was lengthy, but I had my Achilles properly taped up at last.

That about took care of my expo-related needs, so I took the bus back to Pop and then turned around and boarded a bus to Disney Springs. The last time I can actively remember going to the erstwhile Downtown Disney was in February of 2013, so it'd been awhile, and much has changed. Since I didn't have any park tickets, it seemed the perfect time to do some exploring.

Thing one upon arrival was to head into Goofy's Candy Kitchen, where I found them: the elusive sour gummy worms which had been so distressingly absent in November. I immediately bought two bags to take home plus a Powerade for my more immediate hydration needs.

From there I set off to investigate this new Disney Springs thing, taking mental notes about what I might want to check out in more detail on the way back. I did stop at the shop in Raglan Road to enjoy some Extremely Irish Stuff, then headed into the new Morimoto Asia for some sushi. More to come on that!

I wound up walking all the way to the other end of the area, grabbing a coffee along the way. Sad note: if you buy your Starbucks at Disney Springs, you do not get the special Disney cup. :(

On the way back I began ducking into any shops I fancied, but I spent the bulk of my time in The World of Disney, of course. I made a very thorough investigation of every room and pondered a few things but ultimately spent only my time there.

Then I headed into Tren-D to see if anything was cute, which it was, and affordable, which it wasn't particularly. Tren-D spills directly into the Marketplace area, where I was thrilled to discover a store called Cherry Tree Lane. I also took a spin through the Wonderground art gallery, which has some great Haunted Mansion canvases and prints if you're interested. 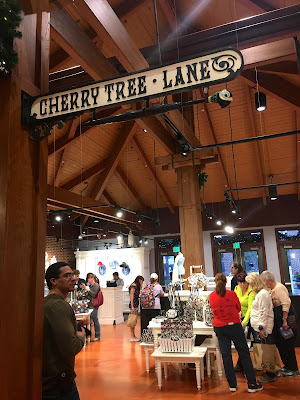 I also ducked into the toy store and the Christmas store, but it was The Art of Disney that unexpectedly commanded my attention. Most of the stuff in there is obviously out of my price range, but there are some little prints that are potentially affordable. Leafing through the stacks, I found a lone Figment that I came sooooo close to buying. So close! I almost pulled the trigger after I saw another person looking at it and immediately felt territorial, but after considering the added cost of framing and the difficulty of getting it home I demurred. If it's still there in November, though... 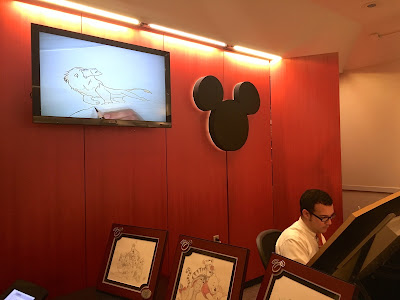 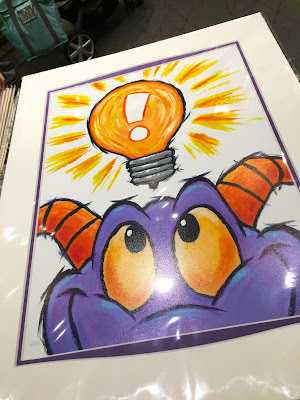 By that point it had started to rain in a rather serious way. It was about time for me to go anyway, so I made my way back to the buses and grabbed one that was headed to the Art of Animation. Why there and not Pop? Because I wanted to Create My Own Pasta, of course!

And so did every other runner on property, it seemed. The line was a billion miles long, and a CM was walking the line informing everyone they had ready-made pasta with chicken at another bay, but no one seemed deterred. Certainly I wasn't - I waited and I got my whole grain linguine with chicken, spinach, garlic, marinara, and parmesan, and it was AWESOME. 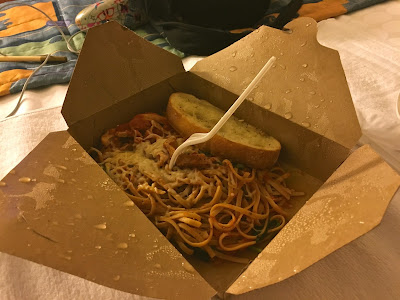 I left AoA, immediately came back because I realized it really helps with the whole pasta consumption thing when you have a fork, got said fork from a cashier, and headed back to my room. I changed into a t-shirt and sat on my bed eating pasta and watching Miss Congeniality because being a hotel practically requires that you watch stupid TV, and also William Shatner.

I puttered about prepping for the race and setting multiple alarms before checking in for my flight home the next day, then finally went to sleep. Or tried. For some reason someone thought it would be a great idea to play "Celebrate" on repeat. Maybe at the pool? Dunno what was going on there. Also I was cold, so I supplemented my blankets with every towel the bathroom had to offer. And then, after what felt like forever, I fell asleep...

Next up: the WDW Marathon!