The Fairest Trip Report Of All: The WDW Marathon

Mini trip report time! I'm covering my quick weekend trip for the WDW Marathon. To read all the posts in this report, click here.

Did I dream it? Did I dream that I dreamed it? In either case, I sat bolt upright in bed. Had I slept through my alarm???

2:48am. Whew! Also: damn. Never gonna get those 12 minutes back, not the way they could've been. Ah well. Better than the alternative, no question.

At 3am, my phone alarm went off. I sat up and turned it off along with the other two backup alarms I had set. Two minutes later the phone rang with my wakeup call. I was already eating a snack. Wasn't gonna sleep through this one!

I stepped out into the dark night, but not the cold - it was 70 degrees outside, and humid as all hell. I kinda regretted my decision to wear throwaway coverups, but I wasn't about to turn back for that. At about 3:35am I arrived at the bus line, and just before the hordes, it seemed; I looked out the window from my seat and saw the line stretching all the way back to the luggage check desk.

The trip from Pop to the Epcot parking lot wasn't that bad, really. There was some traffic, but nothing like what I hear some other routes were dealing with (I was texting with Nicole and she sent me a photo of a nightmarish line of cars ahead of her bus). It was shortly after 4am when I entered the pre-race area, and I quickly grabbed a spot in a port-a-potty line. Thus relieved, I took a spin through the merchandise tent (nothing worth having) before heading toward the corrals with the deejay's blessing.

I was early to the corrals, and easily secured myself a spot at the very front of H. Then, of course, came the waiting. The various race hosts began their chatter about that time and I admired their efforts even if it was way too early in the morning to match their energy levels. In particular I noted Carissa's Sorcerer Mickey outfit for future Disney Bounding/race costuming. We were held back for a surprisingly long time, but were finally allowed to move forward around the time corral E took off. We inched our way toward the start line and let fly just after 6am. 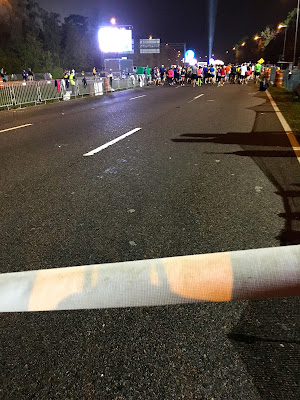 The first couple miles were, as always, uneventful. Roads. I was pleased to note that neither my Achilles nor my hip (a new potential problem) were immediately voicing any displeasure. It was definitely EXTREMELY humid and I wasn't feeling boundless reserves of energy, but I was doing a-okay so far.

The real fun began to kick in as we passed the Magic Kingdom tollbooths, and I was positively thrilled as I took my first few steps into the Magic Kingdom itself. Indeed, I did something unheard of, especially while running alone: I turned off my music. And never turned it back on. Not getting a chance to hang out in the parks made me want to soak in my run through them as thoroughly as possible, and that included listening to the music as I ran down Main Street, into Tomorrowland, and on. 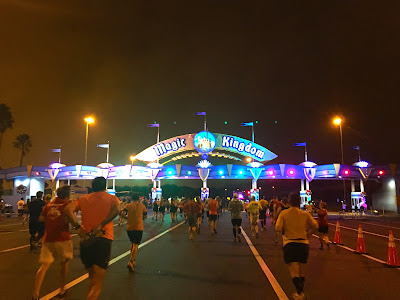 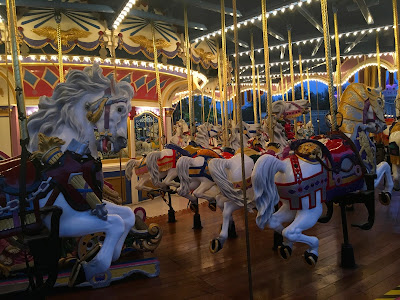 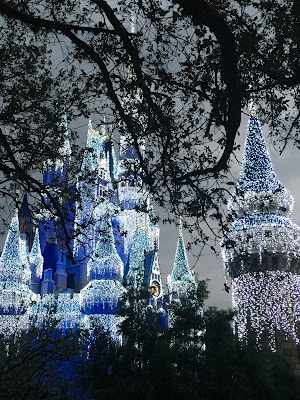 Did I mention the humidity? The 100% humidity? I mean, it wasn't that hot - around 70 degrees, warm but hardly day-ruining - but the tremendous humidity made it feel gross all the same. In that moment I decided I would become a Pictures Girl, and I came to a halt in the line for two Country Bears, which became three by the time it was my turn. Score! 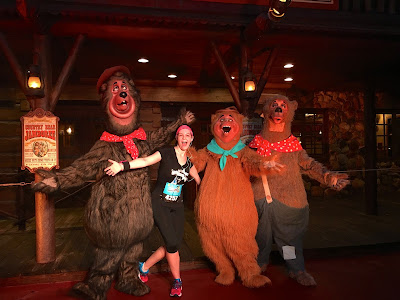 Pat loooooooves Splash Mountain, so when I saw Brer Fox and Brer Bear out for a rare photo op I had to stop.


Right after which I got a text from Nicole: "I see you by Splash Mountain!" She soon joined me at the Maleficent dragon float from the new parade, and we took off together down the road. 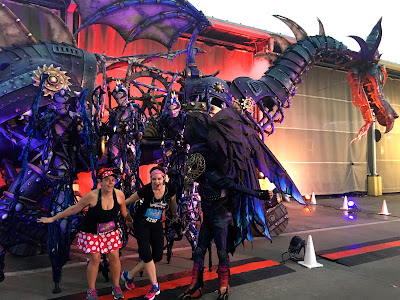 And now for the boring part. Well, not immediately. At first you're in the monorail resort area, and that's nice. But then you're just kinda on roads, with no speedway to break things up. Not that the speedway was that great, but the classic cars were nice and it was a change of pace. Oh well. At least they had the characters out, including the Evil Queen and the very exciting appearance of none other than Shan Yu. 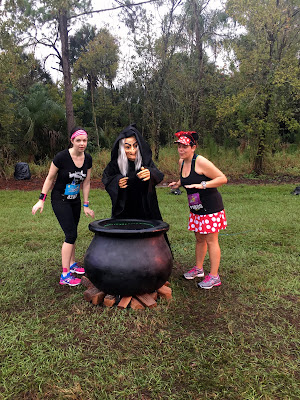 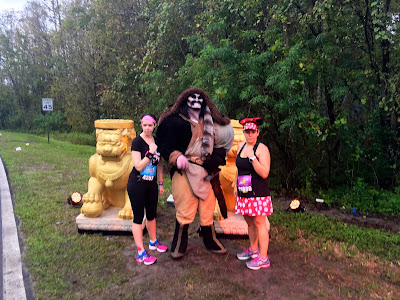 Soon enough, however, we were approaching Disney's Animal Kingdom, which was as full of honor and glory as Shan Yu isn't: Festival of the Lion King performers and adorable animals were there to greet me! Also a boar had a nervous breakdown and had to be tackled in the middle of the race course, so that was new. 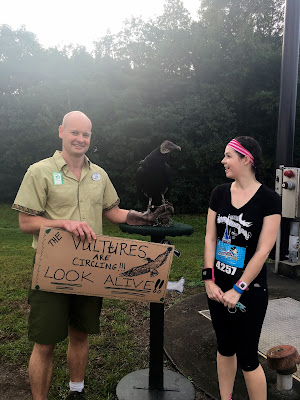 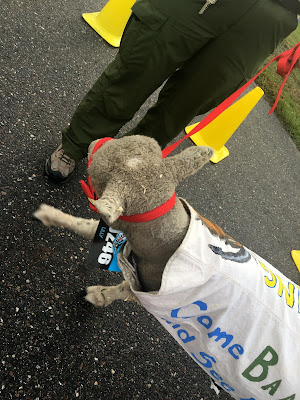 Next we entered DAK proper, where things were starting to wake up. The Magic Kingdom was magical to run through, of course, in the dark with the sparkling castle lights, but there is something to be said for a park just about to open - a TON of Cast Members cheered us on as we entered Harambe, and it gave me energy.

We passed Expedition: Everest at 8:45am; unfortunately, an inquiry to a CM yielded the information that they couldn't guarantee a ride until 9am. We hemmed and hawed a bit about staying but ultimately decided that a 15 minute pause was just too much. Off we ran again, through Dinoland and out of DAK. (Pro tip: use the bathroom just past the Finding Nemo theater. Yes, it's a bit far from the path, but no one is in there.)

Then came the long march: no more parks to be had for miles. Sounds gloomy, right? That's probably why we came across the Haunted Mansion gravediggers shortly after. 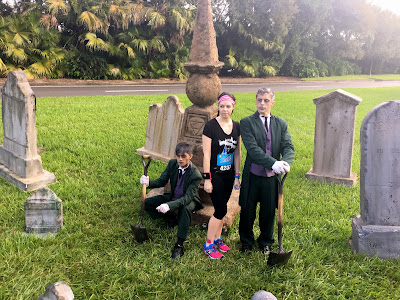 Around this time I start outpacing Nicole a bit, as she was courageously doing Dopey. She shooed me ahead just as we entered ESPN Wide World of Sports. Thank you, brave Nicole, for sticking with me as long as you did and being an excellent running companion!

WWoS doesn't really do much for me. The baseball stadium is kinda cool, but otherwise there's not much to look at besides fields and buildings. Last year this was a rough patch for me. This year it was just as boring, but I had something I have frankly never had during a marathon ever before: energy reserves. The combination of stopping for photos and slowing down to accommodate Nicole's Dopeyness (I hope everyone knows what Dopey is or that sounds like a terrible insult...) meant I hadn't burned through my stores. I actually felt pretty good as I exited WWoS. The entrance and exit of the area come together on the course. "Remember when we saw the people ahead of us and hated them?" a woman near me mused. Indeed.

I kept up a semi-decent clip - not fast, but consistent - as I ran up the hill presided over by the Green Army Men. "If you have time to walk, you have time to do pushups!" declared the senior officer. "Tink and Peter Pan!!! Didn't I tell you you could never never land?" (I have of course heard this joke a million times before but for some reason in this context it struck me as hilarious and I spent several minutes afterward laughing like an idiot. I may have been punch drunk. Run drunk?) 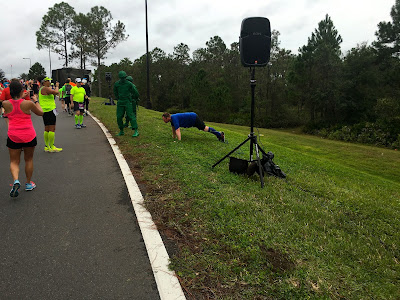 And then, finally, I entered the Studios. This is my least favorite park (although we'll see what the future brings). but I was still happy to be nearing the end in more interesting surroundings. I dance my way through the disco costume hallway with medium spirits, and by the time I reach Sunset Boulevard, my spirits were high - there were SO MANY spectators! The parks were open and CMs and guests alike cheered us on as we ran out of the Studios and down toward the Boardwalk.

Where it became even more of a cheer fest, as the entire Boardwalk resort area was lined with spectators giving out candy, giving out beer shots, holding up signs, and shouting encouragement. One group had even brought their English bulldog, who sat in a camping chair. "Nacho is proud of you!" yelled his owner, but I think his expression and demeanor communicated more concern than anything else.

There had been a chocolate stop in the Studios, but I was not feeling chocolate. Neither was I feeling smarties, Twizzlers, or any other offerings, which made me feel kinda bad because it's really really nice of these people to offer, y'know? But just as I was about to hit the bridge I saw her: a girl handing out baggies of small red candies. "Swedish fish?!" I practically screamed at the girl as I barreled toward her. "Yes!" she said, and I grabbed the bag and said "You're the best ever!!!" and she responded "I love you!!!" and basically I think somewhere out there I have a new best friend.

Then I was into Epcot and on my way through World Showcase, where the crowds continued to be out in full force. I felt tired and slightly pained. But more than that I felt awesome. I felt like everyone there was cheering just for me. I felt like I was doing my best at something I'm not naturally good at. I felt like runDisney was amazing and everyone was amazing. Is this that "runner's high" thing people always talk about?

I had one mission on my trip around the lagoon: a photo with Mulan. Unfortunately there were some non-runners in line ahead of me taking their time with selfies. Is that even allowed? Anyway, I got my shot and carried on. Yay for goals met! 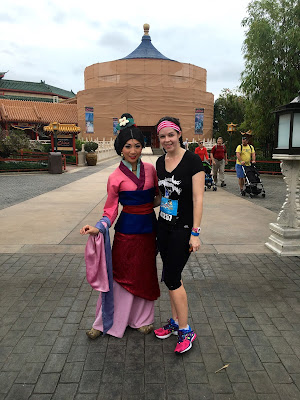 Before I knew it I was running toward Spaceship Earth, out and around past the gospel choir, and then I was... done. Marathoner x 4. My time of 5:42 wasn't great, but considering the number of photo stops I took, the number of times I stopped to adjust my shoe, the humidity, and the simply fact that I HAD NOT HURT MYSELF AND MY ACHILLES SEEMED TO HAVE ACCEPTED EVERYTHING made it all okay. 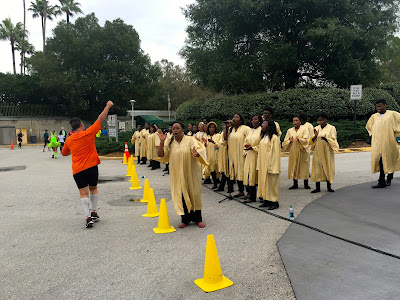 I collected my medal, Powerade, and snack box, and headed straight for the buses. I would've loved to hang around a little and bask in the atmosphere, but I had an important date with my shower.

Would it be too cheesy to say I PR'd in fun? Yes? Then I won't say it. I'll just think it quietly to myself.

Next up: time spent in the monorail resort area.