The Fairest Trip Report Of All: Reviewing Some Of The World's Sushi

Last post of the mini trip report! I'm covering my quick weekend trip for the WDW Marathon. To read all the posts in this report,click here.

And now for the most interesting part of any trip report: a food review.

My boyfriend is not a sushi fan, so I don't end up eating it very often in normal life. Throw me into a solo trip, however, and it's all sushi all the time! (See exhibit A.) So for my WDW Marathon Weekend Mini-Trip, I had sushi for lunch both days. It was... it was kind of disappointing, actually.

First up: the new Morimoto Asia in Disney Springs. The sushi menu there is pretty small and rather expensive; I went with a veggie roll for $7 and a spicy tuna roll (hold the spicy mayo) for I believe $12. You're given the option of brown rice or white, and in the interest of health and marathon fueling I went with brown. Not sure if this affected my experience, but... 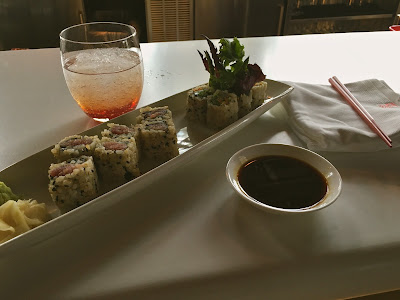 For an Iron Chef, I expected more than this. I asked for my tuna roll without spicy mayo because I feel like it masks the rich flavors of the fish. Well, the rich flavors weren't there. Probably with the spicy mayo it's all about that and the raw tuna is more for texture, but that's not what I go into a tuna roll wanting.

The veggie roll is basically a garden salad wrapped in rice - cucumbers, carrots, greens. No daikon, thank God. I got my veggies in but I wasn't impressed.

It being marathon weekend I was unable to sample what looks to be an extensive sake collection, and for that reason alone I would come back. I'd hesitate to drop cash on the sushi, though. I understand Morimoto's signature dish is duck; maybe sushi isn't really his thing and he only includes it because people expect it of a Japanese restaurant. Then, too, the restaurant is still fairly new and they may still be working out the kinks. If anyone eats here in the future, let me know what you think!

My second sushi experience was at Kona Island Cafe in the Polynesian. This counter service spot is located next to the Kona Cafe sit down restaurant in the lobby, across from 'Ohana and the Tambu Lounge. The Island makes all the sushi rolls for the Cafe, so if you've had sushi from one of these locations you've had it from both. (And note that because of that, you may have to wait a bit for your order even if you're the only person in line; it looked like Cafe orders may be prioritized.)

Anyway. I got what I believe was called the sushi combination or chef's combination or something like that: a tuna and veggie roll alongside a chef's selection of nigiri and sashimi. In both cases the latter turned out to be one each of salmon, tuna, and a believe yellowfin? With tax and such it ran me somewhere in the area of $15, which I consider a good value for decent sushi. Indeed, I thought it was better than Morimoto's, although still not as rich as I wanted it to be. 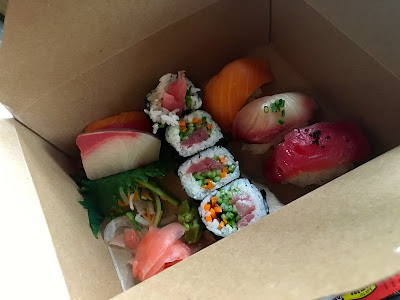 None of the fish I tried at either place had a strong, full flavor. Maybe it has something to do with Orlando's fish markets or something. Seriously, what is going on? I've had better sushi from the counter service place in DC's Union Station. Of course, that place is pretty awesome. You should try it.

If you're at WDW and you're in the market for sushi, there are a bunch of places to get it. I hear great things about California Grill's sushi menu but have never tried it personally, although you'll need to be prepared to shell out all the money you've ever had and ever will have. I've eaten at Tokyo Dining in the Japan pavilion several times and invariably enjoyed the experience. You can also get prepackaged sushi in the Katsura Grill counter service restaurant in the Japan Pavilion. It's exactly the same sushi - marked as being from Mitsukoshi - that you'll find in some resort grab and go food selections, so again, if you've had a California roll from one you've had it from them all.

Personally I find sushi to be a great pre- or post-race selection - protein from the fish, carbs from the rice!

Have you eaten WDW's sushi? What did you think? Which place has the best?