In Which Jenn Recaps A (Literally) Sick 5K 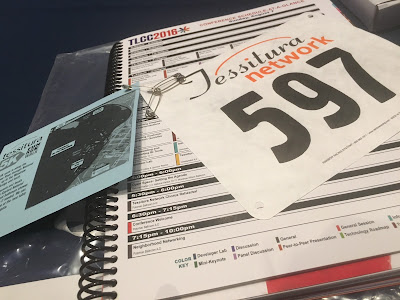 Raise your hand if you've ever run a 5K while sick!

The conference I annually attend hosted said 5K, which explains why I went: it was right there outside the doors of my hotel, it was super low-key, and it was a great way to get a short run in without having to think too hard about it. So when my alarm rang at 5:30am I said nuts* to my cold, threw on some clothes, and meandered down to the Gaylord National pier.

There was no chip timing, and we all just kinda lined up behind the start and went when we were told to go - if you wanted a shot at actually winning, you needed to be at the very front, but I'm not a winning kind of runner anyway. I settled into a natural pace and let things ride.

I don't know how many of you are familiar with the National Harbor area, but I'm guessing not many of you because it's a huge pain to get to even if you do live in DC. But if you've been to a new development recently, the kind with a lot of shops and restaurants and high rises and brick walks in places and it's all really, really nice but also it has a sort of weirdly Stepford vibe, you know what it's like.

Anyway, the course started off down one of those brick walks, past a bunch of shops on our way to the waterfront. There was a water stop by the carousel, but it was only like .3 miles into the race so I ignored it. From then on we ran on a path along the harbor and Potomac river, occasionally a bit muddy but reasonably flat.

UNTIL WE GOT TO THE INCLINE. There was spiral ramp up to a bridge over the highway, which we were not running over but we WERE running to the top. Luckily I had the memory of the ZOOMA Half Marathon's hills to keep things in perspective. And let me tell you, the downhill portion was excellent.

Which is to say that it was an out-and-back, but that's all right - on a waterfront course of only a 5K that's not so bad. In fact, I never even bothered to stop at the water station; I just barreled right on through the entire race. Mind you, that race turned out according to my GPS watch to be only 2.8 miles long, but for what do you want for a free conference 5K? We even got medals this year! Cheap plastic medals, but medals all the same. 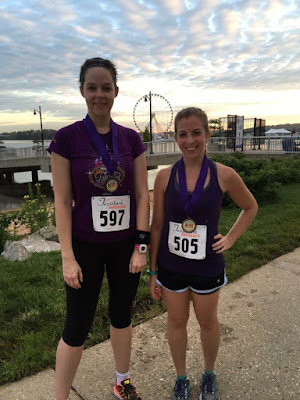 I'm not really sure what my time was as I let my GPS watch run while I did my cooldown. Supposedly there'll be times eventually but nothing's been posted. I'll update if I see anything.

I'm still kinda sick so I apologize if this race recap is particularly whackadoodle. TL;DR: I ran a 5K with a cold and it went fine.

Have you ever run a race while sick? How did that work out for you?

* Where my WWII historians at?