The Jenn Guide To Running On The Beach

Newsflash, everybody: running on the beach is hard.

I was cavalier, going in. I hear running on the beach is hardER, I thought to myself, but I'm a marathoner - how bad can it be?

Let's back up a moment. I never planned to run on the beach, for a multitude of reasons that will be discussed here. Unfortunately my time in the Outer Banks came right after a large-ish storm blew through, leaving VERY SERIOUS PUDDLES in its wake, which didn't dissipate until the very last day.

Clearly I was not going to run on the road unless I wanted to start working on post-swim triathlon transitions. But I was bound and determined to run that week. This left only one option: the beach itself.

I wound up running about two miles four times over the course of the week. It was an experience. I have thoughts. (Although please remember these are the thoughts of an amateur, not a professional trainer!)

THOUGHT: Do NOT plan a long run on the beach if you're not used to it. Running on the sand is tough and engages your body in ways it may not be used to. I know there are people out there who run miles and miles and miles along the coast but I'm pretty sure they had to work their way up to it, y'know? I never felt spent at the end of my runs, but I was tired in new and exciting ways. Speaking of which...

THOUGHT: Do NOT, repeat, do NOT try to run on dry sand. Unless you really relish the ground giving way beneath you. It's not impossible, but it's REALLY REALLY HARD and will make you miserable and maybe even cause you to roll an ankle or something. Or maybe that's just me. Anyway, I found my best bet to be sand that had recently been wet by some of your farther-reaching waves.

THOUGHT: Try to find the flattish stretch of beach possible. The steep inclines common to the shore play unfortunate merry hell on your joints. My skeleton didn't love it when one foot made impact at a higher altitude than the other. That being said, and given that it's hard to avoid some incline, try to work in a halfway turnaround point so that both sides of your body are worked evenly.

THOUGHT: Listen to your body. This is always the case, and as runners we love to ignore it, but this time try to really do it. You're putting yourself through a brand new variation of the same activity which means you mostly know what you're doing but not entirely. The tendency is to be overconfident but fight against that. Be careful. If you feel pain or severe discomfort during your run, stop and walk home. If you feel sore or tight the morning after, take a day off. I know it goes against the proverbial grain but try to do it.

THOUGHT: Sometime a wave might catch you and you'll end up with soaked feet. It's cool; keep going. You're only doing a couple miles, right? When you get back, though, make sure you rinse those bad boys off or you'll wind up with socks o' sand next time you put them on. And give them plenty of time to dry before your next run, for obvious reasons.

THOUGHT: WATCH OUT FOR FISHING LINES. And dogs and children and crabs and sand castles and big holes and sharks and the kraken. But mostly the fishing lines. 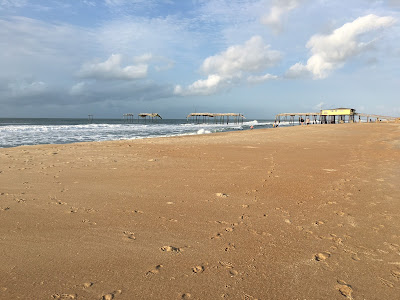 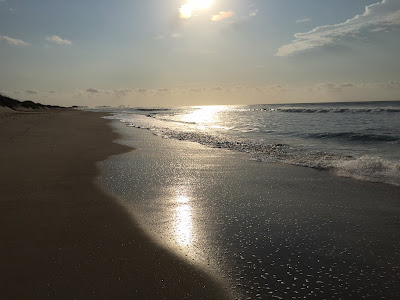 Have you run on the beach? How did you fare?