In Which Jenn Goes Back To Busch Gardens Williamsburg


Therefore when a Groupon popped up for Busch Gardens Williamsburg about three hours south of us, Pat and I jumped at the chance. We've been there before and nothing has changed since then, but I thought a recap would still be fun.

Quick background for those who aren't familiar: Busch Gardens is mostly themed to western Europe, with the park divided into France, England, Scotland, Ireland, Germany, and, for some inexplicable reason, New France aka Canada. (Plus a couple kids areas but I haven't checked those out in several decades, so.) It's a giant step up from your average Six Flags in quality but the majority of the rides do tend to be more thrill-based than story-based.

And what coasters do we love? APOLLO'S CHARIOT! Swoopy, swoopy, swoopy, with a satisfyingly long track. The name of the game here is airtime, with some fun bunny hops at the end. Also, this is the coaster on which Fabio was hit in the face with a goose, so enjoy that.

GRIFFON! If you've ridden Sheikra at Busch Gardens Tampa, I understand you've ridden the same ride: the first drop is 205 and VERTICAL. We waited the extra time each ride to in the very front row because this is a rare case where ride experience is definitely affected by position. When they hang you over the edge of the first drop and make you think about it, looking straight down the track is absolutely glorious. The drop is smooth and fast and awesome. Don't be afraid!

VERBOLTEN! Okay, I love this one more than Pat does, but he still enjoys it. The track itself has two fun slingshot accelerations and the surprise in the middle, and everyone loves a roller coaster in the dark, but it's the themeing that really does it for me. I love that the designers took the time to tell a story, beginning with the car rental and botany lab of the queue, all the way through the blacklit show building and sound effects. This to me is the most Disneyesque thing in the park.

Only bad thing about this coaster: because of all the programming involved in the show building's effects, it has a tendency to go down a lot. We had to come back three times to ride it successfully. At one point we were in the loading area when it broke down. Luckily we hadn't been waiting too long, but it's something to keep in mind when planning your day. Try to get this one in as early as possible.

You could argue that Curse of Darkastle, being a dark ride, is pretty Disney-ish too. I would liken it more to Universal's Spiderman ride, myself, although frankly not as well executed. It's got the whole dark ride sets plus 3D effects going on, but the story of Mad King Ludwig and his victims isn't cohesive. Mind you, I remember riding this back in 2005 when it opened and they used to hold you in a room before you hit the load area to watch an explanatory backstory video. They now just have those doors open, and if you happen to walk through while the video is playing, you see it - if not, you don't. I'm sure line flow is helped by this decision, but I'm not sure the audience gets the full experience without the video.

We also rode one more coaster, Tempesto: it is short and suffers for it. What ride time you get is fun but it's basically over before it starts: forward, back, forward, up, over, done. Pat pointed out the entire experience would be improved if you repeated those motions but backwards. As it is I wouldn't wait more than 5 minutes for it.

I think the only other thing we rode is the skyride, which isn't going to blow any minds but it's a fun throwback.

Then of course there is the predator show (ME: "Can we see the predator show?" PAT: "Do they own that franchise?"). There's some hokey acting but the animals are ADORABLE. The fox might be my favorite. 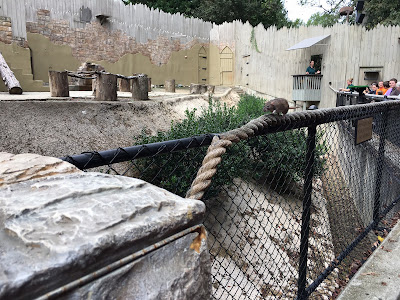 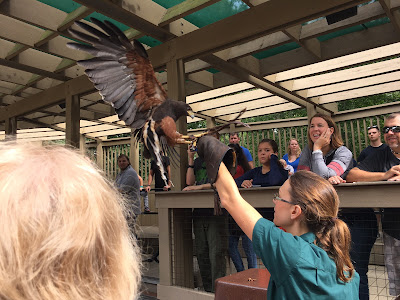 We were there for Howl-O-Scream, Busch Gardens' Halloween event, but did not tour any haunted houses as Pat much prefers roller coasters and I much prefer not having a nervous breakdown. We did walk through a couple scare zones; these I tend to enjoy as the scares are less direct and the open spaces keep me from feeling trapped.

The Wendigo Woods scare zone took over New France, the idea being that some military science department had, I don't know, built a wendigo? Trapped one? It wasn't clear. Mostly there was an audio-animatronic "wendigo" animal in a cage with piped in screams (why? It's caged...). The real "scares" came from guys in blue camo outfits and helmets, who would do things like shout in a bullhorn, snap a clipboard at you, or drag some sort of load metal something at your feet. More startling than anything.

On our last Griffon ride we could see a winged, demonic DJ (whom we affectionately referred to as "DJ Satan") from the top of the first hill, but he had vanished by the time we hit the demon scare zone. I hope he's okay.

I would've liked to walk through a few more but Pat's been having recurring hip trouble and it was bothering him, so we headed out instead. On our way we walked through the Jack the Ripper scare zone at the entrance to the park. I'm not clear if Jack himself ever shows up; mostly it seems to be zombie Victorians. One nifty trick I hadn't noticed during previous trips: headless Victorian ladies. I tried to take a pic but it was dark and I was walking which is why it sucks. 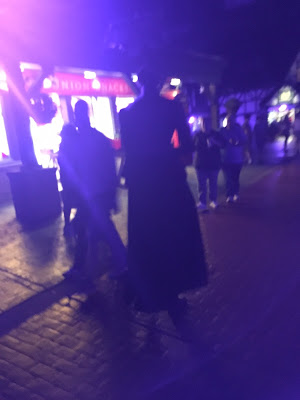 A couple notes on food and drink: food is only okay, with most of it being kinda heavy; BGW has not caught up to WDW for options. France does have crepes, which is nice, and Festhaus has sausage. Trappers Smokehouse has the same kids meals as everybody else BUT they also have waffle fries. The turkey leg place right outside Trappers yields Pat's favorite turkey legs OF ALL TIME, and he fancies himself quite the connoisseur.

In addition to mazes, BGW offered some escape room experiences, which were intriguing but we never got around to it/didn't want to pay extra. Right next to it, however, was a bar, which had some good fruity mixed drinks. We also had some hurricanes at the pirate bar in Italy. Both places served our drinks in souvenir light up glasses, but as we had nowhere to store them and didn't feel like walking them back to the car we ended up chucking them.

Speaking of not having anywhere to store stuff: like Universal Studios, BGW will no longer allow you to bring any kind of bag with you through the line. You have to store things in a locker, which, unlike Universal, is not free. You can rent a locker individually, or you can get a $5 transferable locker pass. Unlike Universal, at no point does BGW require you to go through a metal detector halfway through the line, so I elected to use my tried and true Sports Bra Storage method. More on this in a later post.

Advice if you live in the BGW area but far enough away that it's a bit of a haul: don't get up early and drive in the morning of. Get a hotel. There are lots of cheap ones in the area, and you do NOT want to deal with DC-VA traffic, especially if it's a workday. That's what we did, and we awoke rested and ready to roll. Totally worth the money.

I hope to be back next year - they're building a new wooden coaster! (Maybe even during the regular operating season; I haven't seen that German Festhaus show in forever and I miss it.)

Have you been to Busch Gardens Williamsburg? If you go, can you confirm the health of DJ Satan?