The Fairest Trip Report Of All: The Wine & Dine Half Marathon 2016

Despite my near panic attack the night before, I woke up exactly with my phone wake-up call. But: NEW PANIC ATTACK. Due to the time change, my bedside clock read 4am, the exact time the buses to the start STOP RUNNING. Okay, no worries - the clock needed changing. I could deal with that. What I could NOT deal with was the fact that my phone said 4am too.

Naturally I freaked out, because as a rule I have found phones to take care of themselves where time changes are concerned. Perilously close to a true tailspin of fear, I did the only thing I could do to quiet my mind: call the front desk. I asked the CM who answered for the time, he was like: Uh, it's 3:09? I turned my phone off and on and lo and behold, it said 3:09am too. And just like that, the day was saved.

Now decidedly less shaky, I was able to prep for the race with a light heart. I hit the bus line just after 3:30am and arrived at the ESPN Wide World of Sports just before 4.

There wasn't a ton to do - I made my obligatory bathroom break and then milled around a little. I took up an early position outside of corral D and filed in as soon as I was permitted to take a prime seat at the front. I passed the time by watching some sort of television spot being recorded in corral C. 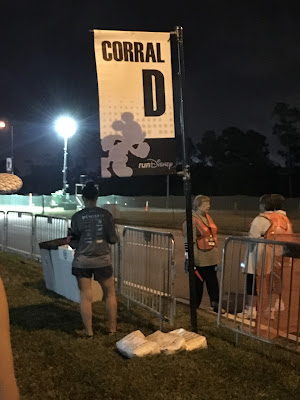 It was just after 5am when I had a terrible feeling: I needed to pee again. CURSES. I briefly considered just holding it until the end of the race before rejecting this obviously stupid idea in favor of the pragmatic but annoying reality that I needed to give up my front-of-corral position and hit a port-a-potty. The corrals were right next to the start area for this race, so the only option was to go back from whence I came.

Naturally at this late hour it took foreeeeever to power through a bathroom line. Corral A was being sent off as I finished, and as I power-walked back to the corral area I stripped my top layer and affixed my earphones so as to shave off as much prep time as possible. I assumed by that point my corral must've moved up, but as I requested entry from a volunteer he told me I was ahead of my group. Rather than send me back, however, this beautiful man let me wait around a minute for corral D to move forward one spot before letting me in. Good sir, I salute you.

Two corrals later and we were off! Being only one week removed from running a full marathon, I wasn't sure how the race would go, really. Upon starting I found my legs were not what I would call fresh, but they were willing. I plodded along at a steady pace that was nonetheless faster on average than my MCM pace. >.< 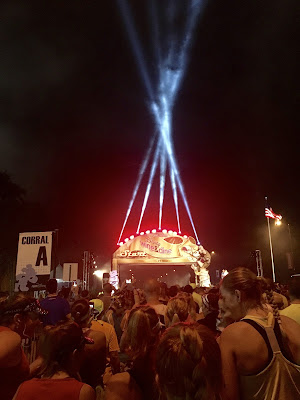 Nothing remarkable marked the first few miles of this race. Entering Animal Kingdom and subsequently running through it is of course a major highlight. They had the Tree of Life Awakenings lights going but no animals out that I saw. 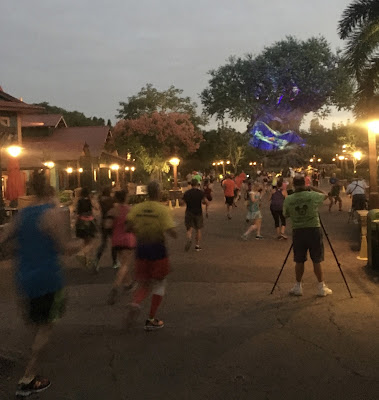 Most of the lines for characters were pretty long, but I of course HAD to stop for the Festival of the Lion King stiltwalkers. They were very gracious about my crazed yelling over how much I love their show. 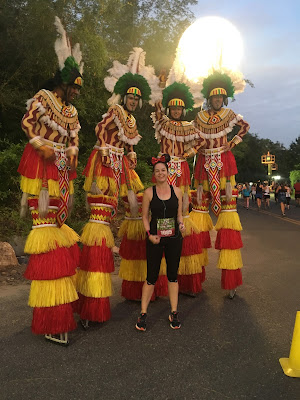 By that point I was out of DAK and running along a rather unremarkable road; this verisimilitude was broken only briefly by a photo op with Meeko, who I haven't seen much in the parks so I figured what the hell. Then more roads, during which it finally dawned on me: oh, right, the Studios isn't part of the course during construction. That's why you're not there yet! 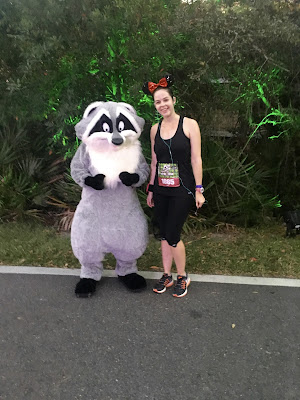 Now for the high point of my race! I was running toward a turn when I saw a Launchpad McQuack character stop. Should I get a picture? I mused. Pat's a Ducktales fan, but there's a line, so...

AND THEN I SAW WHO WAS WITH HIM AND CAME TO A SCREECHING HALT.


I have been trying to get a photo with Darkwing Duck for so long. YOU DON'T EVEN KNOW.

Riding my Darkwing high, I stopped for a quick picture with Lilo and Stitch. 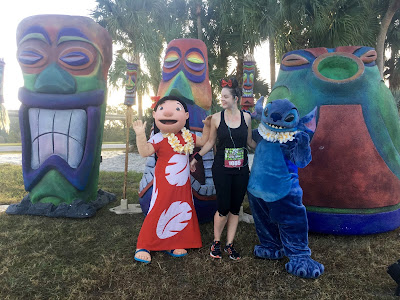 Then I took off down the road. And guys, I mean took off. The minor fatigue of earlier somehow faded away. Check these split times: 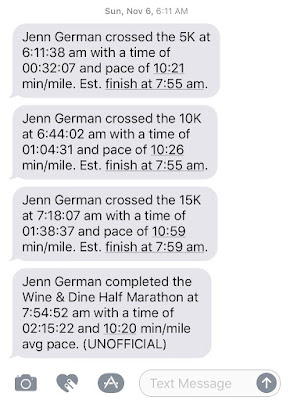 Clearly I meandered through the first half and more before BEASTING the last few miles. My GPS watch clocked mile 13 at 8:54, which is insane for me under the best of circumstances let alone in the final mile of a half I did not taper properly for. And I DON'T KNOW WHY. The magic of Disney? General delirium? One question remains: WHERE WAS THIS DURING THE MARINE CORPS MARATHON, BODY??????

Anyway, I blasted through the final mile or so before sprinting under the finish with a time of 2:15:22, anywhere from 5 to 10 to even 15 minutes faster than I would've expected in a post-marathon context. And that's with a full four character stops, probably costing me a solid three minutes at least. Hell, during my first W&D Half, I had an extra week of recovery time and came in about five minutes slower. I was pretty thrilled.

Next up: day two in the parks. Let's get exhausted!