I was jolted from my slumber by my 7am alarm, because WDW is the only place where I will get up early without grumbling. No such thing can be said for Pat, who slept through my shower et al and had to be dragged out of bed.

The whole time I was hustling him, he made fun of me for being so sure we needed to beat the giant crowds to the Animal Kingdom for Earth Day. "Oh, look at all these people," he said as we walked up to an empty bus terminal. Only to discover that we had missed the DAK bus by an approximate but pretty literal 30 seconds.

Our luck with buses was not great this trip, but the DAK bus that morning was the worst - it was over 20 minutes to the next one. More and more people started to show up, all waiting for DAK, and Pat was forced to admit that I was on to something. He learned an important lesson that day: always trust Jenn's instincts about WDW.

FastPass number one was for Dinosaur, and it was completely unnecessary, but we used it anyway. After all, we can't stop now! Keep going! Keep going! 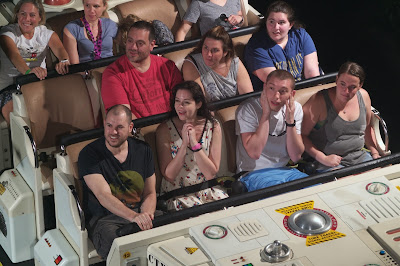 Pat needed coffee, so we hit up Starbucks only to abandon it almost immediately due to the crowds. Instead we grabbed breakfast at Kusafiri while watching the tam tam drummers - more on that in a later post!

We still had some time to kill before our Kilimanjaro Safaris FastPass, and my efforts to move it up were in vain. Instead I started scrolling around in the entertainment section of the app, and saw there was a Flights of Wonder showing in 25 minutes - perfect.

Extra lucky: there was a special Earth Day pre-show! It was basically an extension of the regular show minus any of the "plot." Birds came out a performed trained behaviors (or didn't, depending) with volunteers.

My favorite was the collared raven; you may know him from the regular show as the flag stealer. Well, in the pre-show, he had the role of accepting paper scraps and dropping them in a box. He got confused about what trick he was performing, took the first piece of paper, and promptly flew off! The CM gamely stepped in (taking the paper into his mouth and everything) only to have the raven fly out again and continue as if that was his plan all along. It was hilarious and I wish I'd recorded it!

Then the regular show started, and I was positively delighted to see it was my favorite Guano Joe! He takes what is a collection of, let's face it, mediocre jokes, and elevates them with rock solid timing and delivery. His "the '70s explanation" was especially good that day, alongside an ad lib about how eagles say goodbye by pooping. Mmmhmm, good stuff. Bonus: Pat loved the show too! 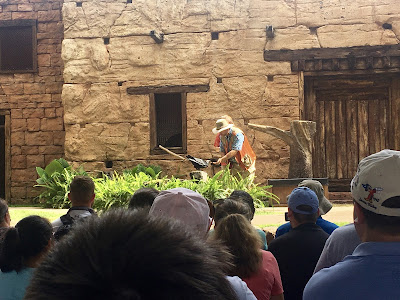 Back we went to Harambe for our safari FP, and it was one of the best I've ever had. The animals were unusually active for the late morning heat, probably helped along by the consistent breeze. We saw a painted dog chasing vultures and the black rhino drinking from the lake, among other things. 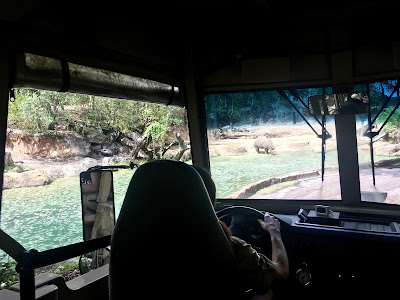 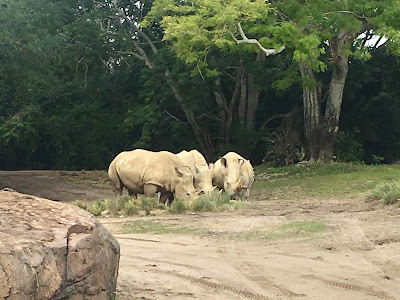 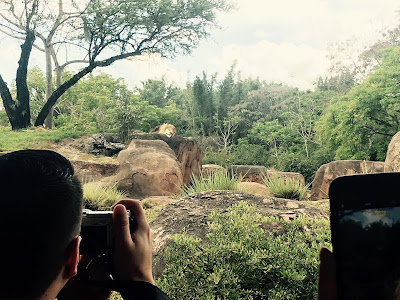 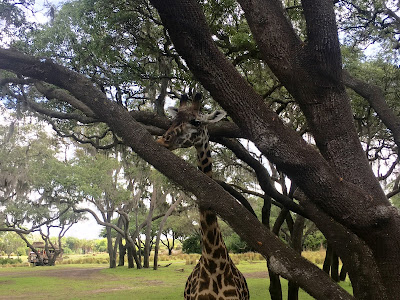 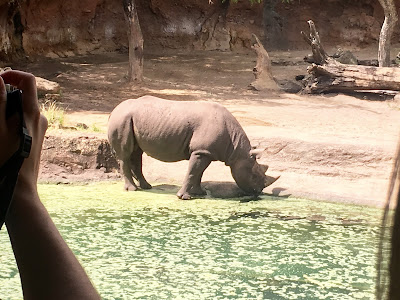 Next up we used our Everest FastPass, where we saw something that cut to Pat's heart: a little kid crying in the Everest line because he had just missed the height requirement. This exact same thing happened to Pat when he was three and was barred from Big Thunder Mountain. If only we'd been a little closer, Pat could've consoled this kid. Regardless, small children of the world: know it DOES get better. 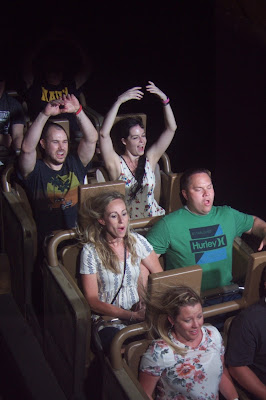 After our romp through the Himalayas we headed over to Nomad Lounge for drinks and snacks (again, more on this later). While there, I managed to snag a well-timed Rock 'n Roller Coaster FP, as we were heading to the Studios next.

After briefly frowning at the blocked-off Pandora bridge - alas, no soft opening for us - we rolled out of DAK, stopping on the way to pick up some of those Earth Day selfie cutouts they were handing out. I had originally been gunning for the elephant, but I was delighted to find they also had shark and tiger versions. The latter being my nickname for Pat and the former being my favorite animal, I took both. 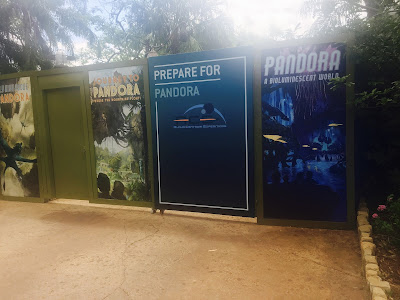 There was a long line waiting at the Studios stop, but new buses came quickly and we were there in a reasonable amount of time. We used our RnR FP, then picked up a new one for Toy Story Midway Mania. 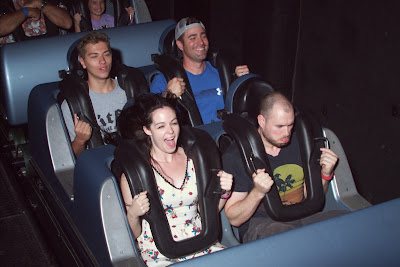 All together now: we had some time to kill before our next FastPass... so we did MuppetVision 3D, the only experience anywhere that makes me a little sad when I miss some of the preshow. We caught the most important bit, though: Sam Eagle's safety instructions. What sort of foolishness would you like to see?

We also poked around in the gift shop - more Muppet shirts need to be cut in women's sizes - and PizzeRizzo, although we didn't end of getting anything. A walk to Min and Bill's didn't yield any snacks either. 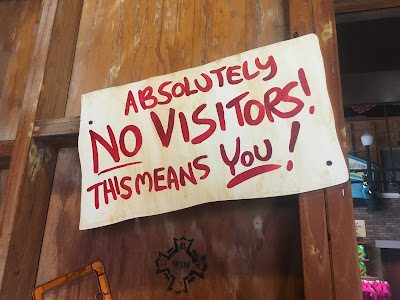 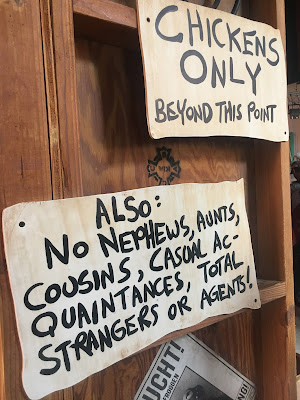 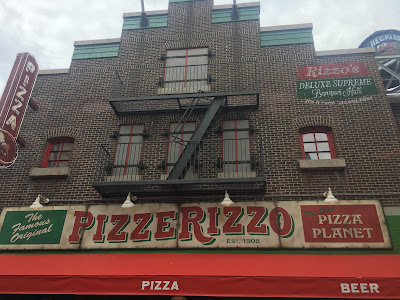 Instead we headed toward Midway Mania, stopping on the way for the March of the First Order (little did we know we'd be seeing it a lot before the trip was over). The flags on the stage unfurled and it immediately struck me: someone in the design department has never read Kurt Vonnegut's Breakfast of Champions, because that, my friend, is an asshole. 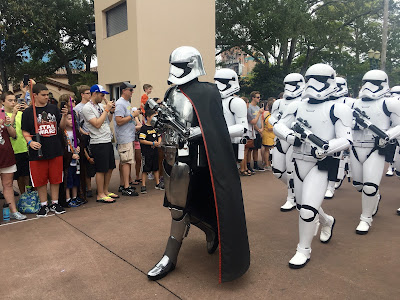 One ice cream sandwich later and we were on to our Midway Mania FastPass. Pat was determined to improve upon his score - but I still beat him! Ha! I probably shouldn't have, though - turns out he never noticed that there are much higher point values toward the bottom of the screen. Knowing that, I'm sure he'll smoke me next time.

By this time it was getting pretty crowded and there were no good FPs readily available, so we left the park in favor of home and food. Boatwright's wasn't taking walkups, so we wound up with a combination of things from the River Roost bar and the food court (more details on POR food offerings in a later post).

Then it was back to the room to prep for the race. I briefly thought my GPS watch was broken, but Pat helped me fix it. To reward him, I subjected him to reruns of Say Yes to the Dress while I set up all my race stuff. Aren't you glad you don't date me?

Bedtime followed shortly, although not sleeptime because naturally I couldn't help but freak out about the possibility of sleeping through my alarm. No matter. Next up: the Dark Side Half!

Don't forget, you can follow us on Twitter @fairestrunofall. If you have any questions for us, leave a comment or email us at fairestrunofall@gmail.com. See ya real soon!
Posted by Jenn at 8:53 AM