The Fairest Trip Report Of All: Dark Side Half Marathon Recap

This is going to be an interesting recap, and here's why: despite the great course, the inherent fun of a runDisney race, and a really good run, this was simply not the race for me.

I should really have known this going in, because I am - and please don't hate me for this - not a Star Wars fan. Which baffles me, frankly, because I SHOULD be. I am a huge nerd in other areas. You would be hard pressed to find someone better versed in the vagaries of Star Trek: Voyager. I would be happy to tell you all about what was wrong with the Narnia movies. I am very pro-Doctor Who. I can talk Firefly. Come at me with your Douglas Adams, your Terry Pratchett, and ABOVE ALL your Robert A. Heinlein. I am here for it.

But for some reason, Star Wars doesn't do it for me. And I underestimated the impact that would have on my enjoyment of this, a Star Wars-themed race.

That uplifting intro aside, let's talk about the Dark Side Half, shall we?

I was up at the crack of 2:55am with my frankly terrifying wake-up call - those Disney phones are shrill. I whipped through my morning to-dos and rolled out the door in my Grand Moff Tarkin costume. Don't ask me why, but of the Star Wars I've seen, Peter Cushing is my favorite.


Outside I was greeted by: nobody. Nothing. Riverside was a ghost town. I didn't see a single other runner until I approached the main lobby. I checked the date twice.

Anyway, weird deathly quiet notwithstanding, I made it onto a bus and was at the start area before 4am hit. The race started at the Ticket & Transportation Center and ended in the traditional Epcot parking lot; since not all tents were necessary in both places, I didn't see, say, a merch tent. There was the usual deejay ("Uptown Funk" plus the SW cantina music was interesting) and a ton of character photo ops, but the lines were ridiculous and I didn't care enough. 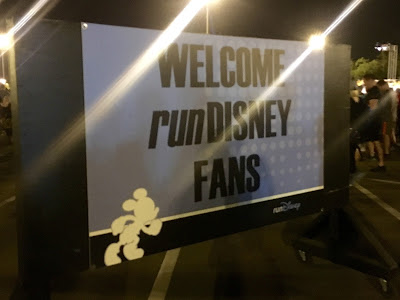 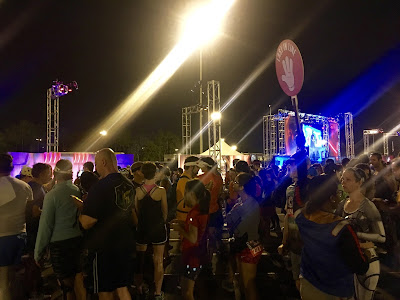 I became a bit of a nomad, camping in one spot to eat my Sour Patch Kids, then another to wait a bit before I hit the bathroom - I didn't want to go too early and wind up with another Wine & Dine-style last minute bathroom dash. (I didn't - not exactly...)

Post-bathroom break and slid into corral C just as the announcers were beginning their spiel. A lot of the usual stuff: honored charity, some crowd interviews, sponsors, etc. Plus like a million Star Wars trailers, which were minimally diverting, I guess, but I wasn't the right audience.

The emcees mentioned something about doing the corrals in, I don't know, mini-waves or something? With 20 separate starts including wheelchairs? I don't know what they were talking about, though, because aside from the initial arrangement of the corrals being a little further from the start I noticed no difference. My corral was called and I started to run. Anyone know what the multi-starts were about? Maybe it kicked in further back? 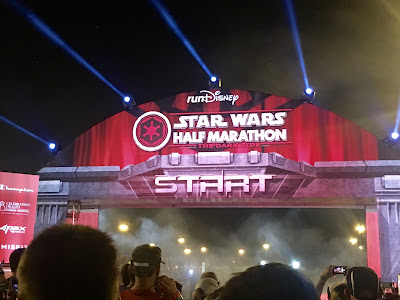 Would you like to know how to guarantee yourself negative splits? I'll tell you how. All you have to do is realize just as you cross the start line that you need to pee again. Then refuse to stop until you reach the real bathrooms.

Bladder aside. The race course kicked off from the TTA and out onto the highway - I don't even remember seeing any resorts or anything, although I could be blanking. The roads seem unusually dark, like some planned lights were missing.

The first item of note was what I believe was supposed to be a lightsaber fight but was largely just blinking lasers. I don't remember there being an epilepsy warning for the race, but I guess it was in the waiver. There were also several photo ops, including the ewoks, but the line for them was nuts so I kept rolling.

I'd say we hit the Animal Kingdom around mile five, and I kid you not, I took two steps in and made a beeline for the first bathroom I saw, by Kali River Rapids. And just like that, I was a faster, less sloshy person. Tada! 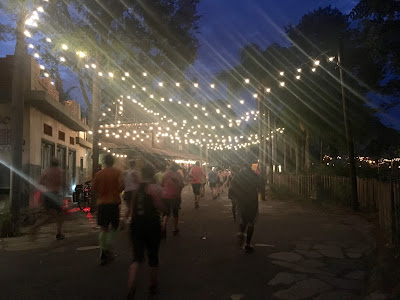 DAK was of course beautiful in the dark, all lit up and sparkly. I was really getting into my happy runDisney place. And I tried to do a standard happy runDisney place thing: go for a photo stop. I pulled off for a photo with some stormtroopers and ultimately regretted it. It took awhile and didn't event turn out well, and a quarter mile later when I left DAK there was a glut of characters with much shorter lines. 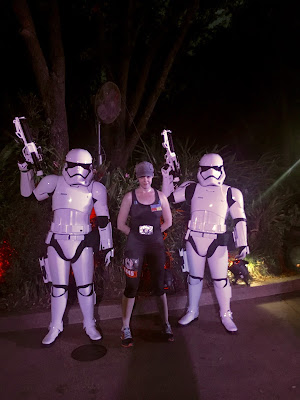 And I didn't really care about ANY of them. I don't even know who a good chunk of them were. After the race, I kept asking Pat questions like "Was there an abominable snowman on Hoth? Because I think I saw a photo op for that." Apparently being actually interested in the photo stops is a prerequisite of a good time. Who knew?

So yeah. This is probably one of my more boring runDisney recaps. It's funny, but in terms of running, it went really well. My last three miles were rockin' negative splits: 9:37, 9:22, 8:30. If I hadn't stopped off for the bathroom and that pointless stormtrooper photo op I might've had a PR on my hands. But that's not really the point of runDisney, is it? I could've had a new PR at the WDW Marathon but I'm not mad about it because I enjoyed all the stops and had a great time.

But back to the race. After DAK, more highway, then a teensy bit of the Studios, basically in and out. Then along the Boardwalk - a fair amount of spectator support here, as per usual - and into Epcot from the back.

You may recognize all this as the last portion of the WDW Marathon. It also resembles the final bit of the Wine & Dine Half. BUT. There is one important difference between W&D and the marathon: WORLD SHOWCASE.

That's right, we ran through the World Showcase!! During a half! And it was awesome. I didn't see any characters out, but lots of CMs were hanging out on the course, waving flags and cheering. There were also a ton of photographers, and I learned an important lesson: if you wear your bib on your leg, don't bother doing fancy ballet jumps because you're NEVER GONNA SEE THOSE PICTURES.

I whooshed out of WS, across the bridge to Future World, past Spaceship Earth and out. It was a good race. The course was fantastic. I felt strong and fast. I always love running through the parks.

But I couldn't help but feel sort of removed from the excitement. Why don't I like Star Wars?? WHAT IS WRONG WITH ME???

So that was my Dark Side Half. It was amazing. But I don't think it's the runDisney race for me. Which sucks because the course is AWESOME. Can someone work on diverting Wine & Dine into the World Showcase?

Don't forget, you can follow us on Twitter @fairestrunofall. If you have any questions for us, leave a comment or email us at fairestrunofall@gmail.com. See ya real soon!
Posted by Jenn at 8:52 AM