In Which Jenn Crushes The ZOOMA Annapolis Half Marathon

This race went so well I'm worried I may have used up all my good race luck for the year. If you're running a race and see someone face down in the mud, covered in scrapes and both legs broken, it's probably me.

But let's not worry overmuch about the future. Let's dwell for now in the comfort of the past, where I ran the ZOOMA Annapolis Half and came as near to crushing it as I could reasonably hope. Settle in!

I run ZOOMA for the practical reason that it starts and finishes under 10 minutes from Elizabeth's house and she allows me to crash with her. Therefore race morning started with an easy-breezy drive to the Navy Memorial Stadium in Annapolis, where I parked just before 6am with a 7am race start. So far so good.

Another reason I run ZOOMA is because the race starts a 90 second walk from where you park your car, so I was able to bounce back and forth a bit as I prepared, store my stuff, charge my phone, etc.

A third reason is because, if you know where to look (or even if you don't; they're not hidden, just a smidge further out), there are REAL BATHROOMS. And yet somehow there was still a line in front of the porta potties at 6:45am even as I waltzed into the legit version with no wait. People are weird, man.

Anyway, after my phone charging and my snack eating and my bathroom breaks, I hopped into the 10-minute pace area, the 2:10 pace team in sight. Five minutes later we were off, around the stadium and let loose on the streets of Annapolis.

I ran this race last year and the course was exactly the same; I went in prepared. The race includes a half, 10K, and 5K, but everyone starts at once and the courses veer and diverge at random a bit. Our first couple miles took in historic Annapolis, including the Naval Academy, St. John's College, and my personal favorite, Main Street. 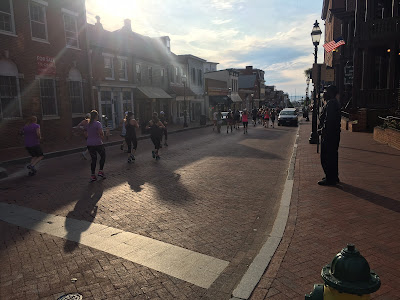 Indeed, I guess I was so excited for this section that I went out too fast - I clocked what were, for me, blistering speeds, leaving the 2:10 pacers in my wake. They caught up with me as we headed out of the historic area and on to the roads, though, as (I learned) they never walked for water stops and I always do. Having lost them just after the Severn River Bridge last year, I was determined not to do so again; I settled in behind them as we headed onto the highway.

And then we began the Hard Part. There's the aforementioned Severn River Bridge, of course. It is rough. See? 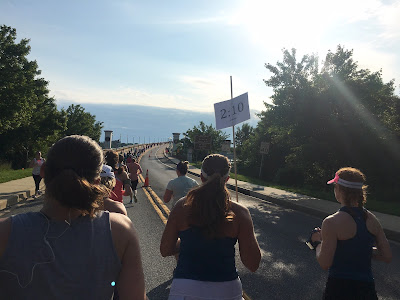 Unfortunately, your reward for your efforts is a second half of the course located in the rolling hills of Annapolis's back parks and crud. Last year... well, here, let me quote myself!


That second half, guys. It was the worst. It was in out-and-back that in turn involved several internal out-and-backs, Inception-style. And the worst of it was that every time you ran downhill, you could see the people ahead of you running uphill on their way back. I saw so, so many people stop and walk, and not without full justification. At times my running steps were barely more than a glorified walk

So you can see the hill situation was not exactly morale-boosting.

How did I handle it? BY BEING AWESOME AND STAYING STEP FOR STEP WITH THE 2:10 PACERS, THAT'S HOW. Because I specifically trained more on hills this year! Oh my God, guys, my training ACTUALLY PAID OFF! That never happens!

Once I took my position in the pace group, I never ever let go. I took to sprinting ahead when I saw water stops, walking as I drank, and then picking them back up as they passed by at a steady rate. I got to talking to the one girl who was a pacer last year too, and she said I looked strong. Didn't seem entirely sold on Sour Patch Kids as fuel, though...

By the time we dragged ourselves back up the Severn River Bridge (oh, yes, they make you do it twice), I was feeling good. Despite the remaining inclines, I was pretty pleased with myself... until mile 12, for some reason, when my lungs decided they were no longer interested in inhaling at full capacity...? Not sure what happened there. Pollen? Anyway, I dug in, battled back, and kept the pace.

I was starting to see the wall - not hit it, mind you, but see it - as the mile 13 marker came gloriously into view. I took off with my new pacer friend toward the finish. A few yards out she pointed to a girl ahead of us. "See her in the pink shirt?" she said. "You have to beat her! GO! GO!" And that's how I wound up sprinting across the finish, against all odds, with a time of 2:10:36.

This is 15 seconds slower than my current PR, and a part of me is a leeeeetle sad I didn't beat it. (I know. I can never be satisfied.) But given that that record was set on a mostly flat course whereas this time was achieved on a hilly course that I completed SIX MINUTES SLOWER last year, I am pretty damned pleased with myself. And since I'm running my PR race again this year, I'm jazzed to see what else I can do.

Oh, for those who are curious: the post-race area is solid. There were plenty of snacks and water (but no bottled sports drinks), plus some vendors and a wine tasting area I didn't check out but seemed popular. All in all it was a good experience.

Bring on the next race! Another PR, pleeeeeeeease. :D

Don't forget, you can follow us on Twitter @fairestrunofall. If you have any questions for us, leave a comment or email us at fairestrunofall@gmail.com. See ya real soon!