In Which Jenn Runs On Assateague Island

I noticed something very interesting last time Pat and I went to Assateague Island: there is a running path. And so when Pat suggested another pilgrimage last weekend, I was bound and determined to go for a run on it. In case you'd like to take a crack at this somewhat unique experience yourself, here are some notes:

First, about Assateague Island. Even if you're not a MD/VA/DC native, you might be familiar with it - ever heard of Misty of Chincoteague? Marguerite Henry's books made Assateague and its sister island Chincoteague famous.

Specifically, Assateague is known for its free-range wild pony population, which is kept under control by, among other things, an annual roundup. Every year the ponies are swum the short distance from Assateague to Chincoteague (where people live) and a certain percentage are auctioned off. And yes, when I say "swum" I do mean "the ponies are herded into the Chesapeake Bay and swim over to the other island." It's been going on for almost a century; learn more about it here.* (This year's happened yesterday!)

* What I find funny is that, despite its status as something of a tourist attraction, the official park website goes out of its way to describe the event as crowded and difficult to see and just generally all but writes PLEASE DON'T COME YOU'RE IN THE WAY COME BACK ANOTHER TIME in giant flashing letters on the page. But I digress.

Therefore the first and number one thing to know when embarking on an Assateague Island run is that you might come across some ponies, and if you do, give them a wide berth. Observe:


In addition to the dangers mentioned in the sign, the ponies are also known douchebags who are notorious for rooting through unattended bags and such in search of something interesting and/or edible, so you'll also want to secure any belongings you're not bringing on your run, ideally in a tent or car. Do not leave your stuff on the beach. People may respect a towel and umbrella as a sign of ownership but the ponies do not.


The second and very nearly as important thing to know is, for the love of God, BRING BUG SPRAY AND FOG YOURSELF WITH IT. Dear Lord did Pat and I learn this the hard way. We were there because the waves looked good enough for Pat to surf, and he described horseflies landing on his face while actively surfing. I came out of my run COVERED in mosquito and/or horsefly bites (I have spent most of this week looking like the sufferer of an exciting new plague). And that's after we both sprayed ourselves down. The key here is that you need to aggressively spray yourself down. The bugs can and will bite you through your clothes and on your face, so hit EVERYTHING.

Although you may find that when every walk break turns into a bug buffet you run faster. Take your motivation from any source you like.

Lastly, know that it costs $20 for a day pass into certain parts of the island at the time of this writing. Just a heads up.

Okay, now we're going on our run! We parked in the south beach lot, which seems to be the base of the bike/running path; that's where I started from. The trail is fully paved and has helpful bike icons to indicate you're following along.


There are mileage markers along the path, which count backwards to the Visitor Center, where it bottoms out after around 5 miles. You'd be hard pressed to get lost - although there are one or two places where you could theoretically diverge, those aforementioned bike icons and mileage markers combine to keep you on the straight and narrow. 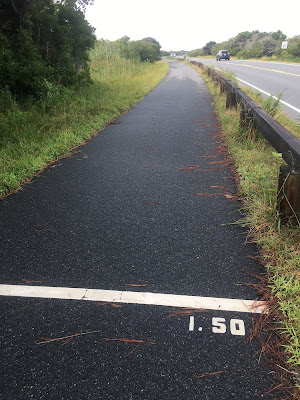 You'll cross the road a handful of times, but there are clearly marked pedestrian crossings. As far as I remember, I crossed every one I saw to stay on the path.

Despite this being an island run, you don't see much water most of the time. In fact, I'd be hard pressed to call the trail "scenic;" mostly you're running past camp sites, trees, and roads o' cars. That changes toward the 4 miles mark, though, when you hit bay views and the pedestrian bridge off the island: 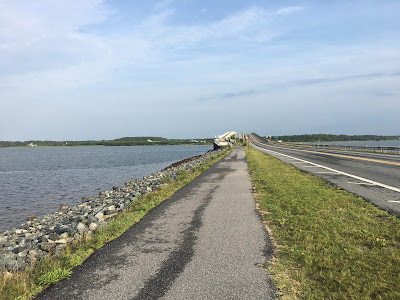 The top of the bridge even features telescopes and some pony information placards featuring some hilariously menacing illustrations.

Once you've conquered the bridge, you hit the Visitor Center, which is ostensibly where the trail ends. As Pat and I drove home I did notice a little more trail extending past the building itself, but beyond that I think it's the road for you. I turned around just before the center at approximately 4.6 miles and went back the way I came for a total of 9 miles and change.

Would I run the trail again? Absolutely! The scenery may not always be stunning but the path is mostly flat, the bridge is nifty, and the mileage is right. Of course, I need to take a bath in Raid first. I would definitely recommend it - after all, when else will you get a chance to run with wild ponies?